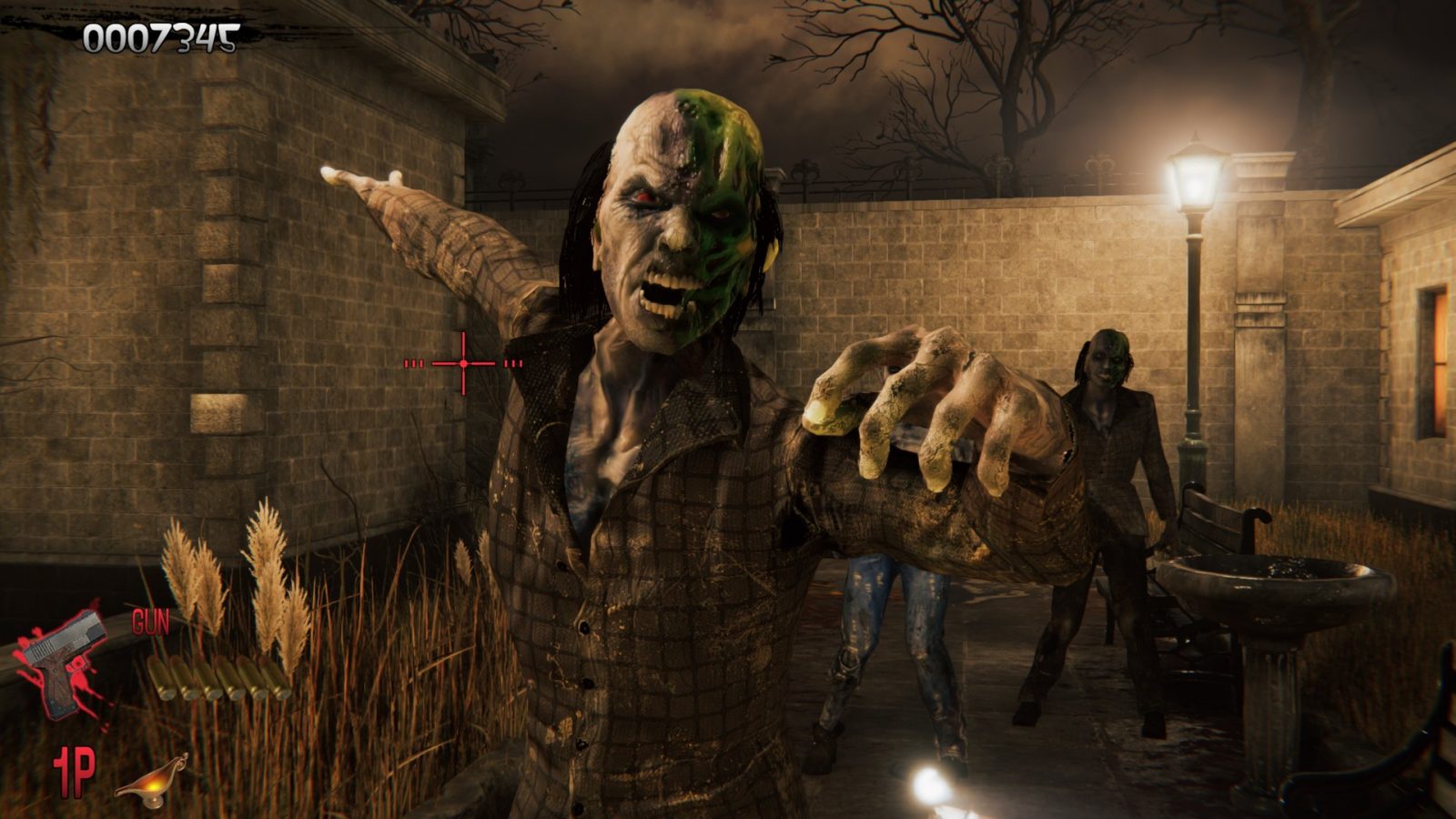 When House of the Dead was first released in arcades in the mid-90’s it was a spectacle to behold. Players flocked to the game, eager to fight off Dr. Curien’s biologically engineered monstrosities and end his reign of terror all while pumping an insane number of quarters into the machine.  It was an experience truly made for the arcade and despite being ported to both the Saturn and PC the experience was never quite replicated correctly for at home play. Thanks to modern technology that’s no longer an issue and the House of the Dead Remake brings the original House of the Dead title to life on the Nintendo Switch in glorious HD. Unfortunately, the game also stumbles a bit and missed a great opportunity by not releasing with a Switch compatible gun component to more accurately replicate the arcade feel.

I was excited to relivemy childhood by booting up House of the Dead Remake and using the Nintendo Switch’s gyroscope capabilities to replicate the light gun feeling, but unfortunately I soured on that hope nearly immediately. The gyroscope felt unwieldy and I found myself having an incredibly hard time getting off precise shots on enemies or background breakable objects, especially during the boss fights which require hitting very small, defined weak points. My pointer was constantly darting off in random directions and seemed to just not be able to maintain any sort of calibration, so sadly I had to switch it off and manually control the cursor with the left thumb stick instead. 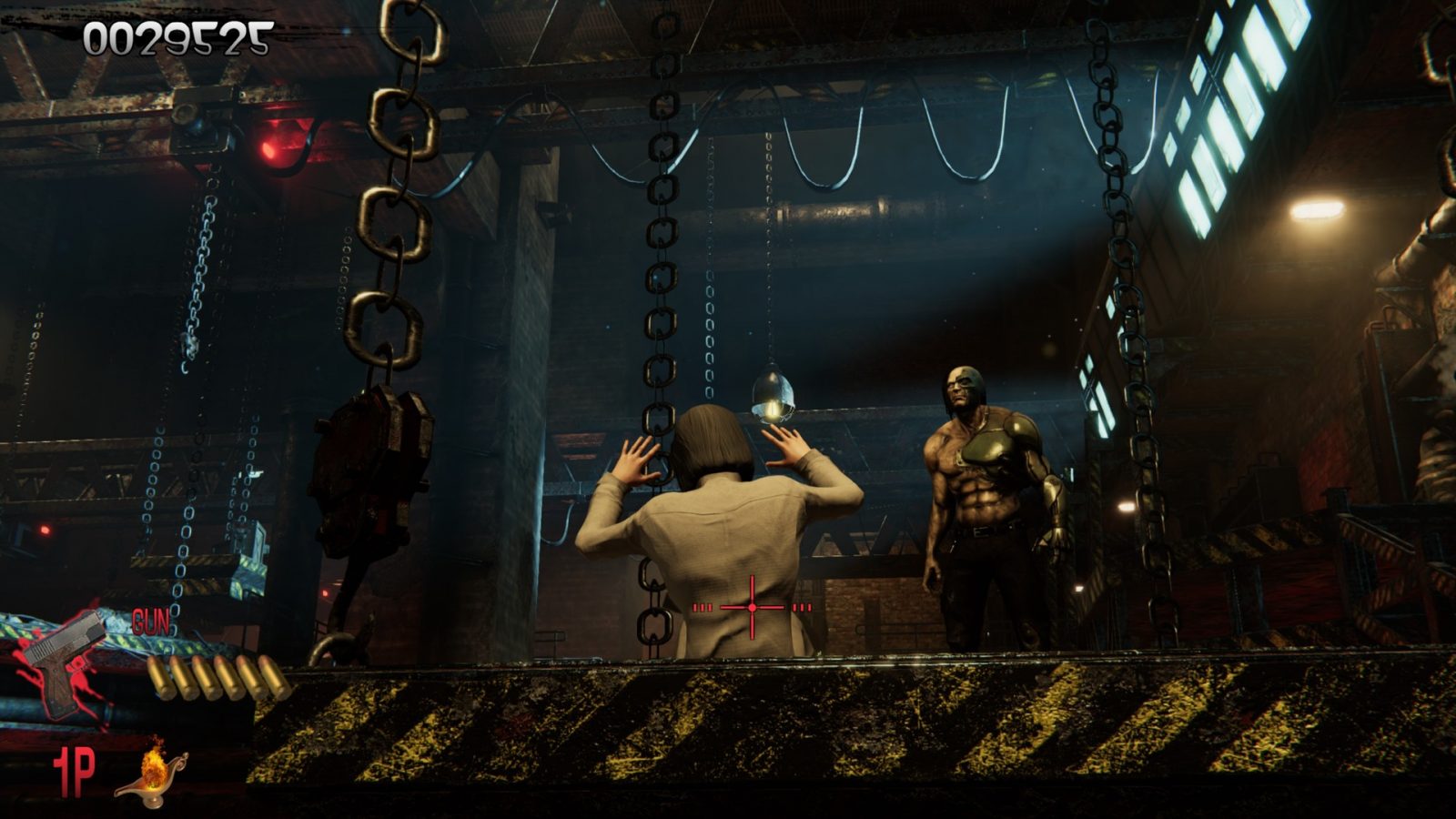 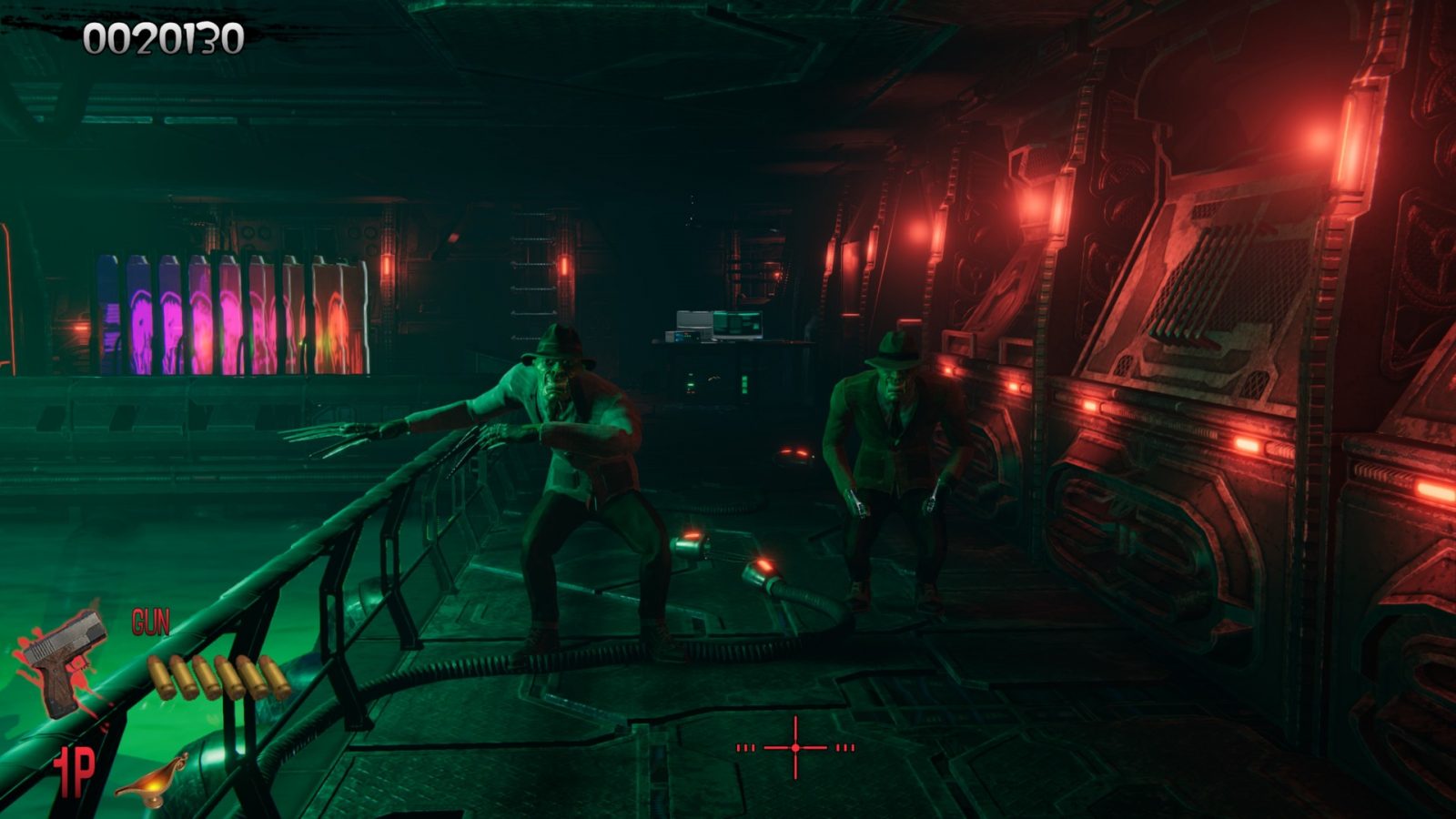 Thankfully, manual control provided the accuracy I had hoped for and came with a slew of options including the ability to tweak the cursor speed, cursor opacity, and to toggle aim assist. In House of the Dead enemies come at you hard and fast, so precision is king.  It’s possible that messing around with the sensitivity settings a bit more may have led to me finding a balance that worked for the motion controls, but I didn’t want to keep tweaking settings bit by bit when the manual controls worked just fine.

If you’ve never played House of the Dead, it is a simple yet fun on-rails shooter that moves at an incredibly fast pace. You play one of two characters who are infiltrating a mansion to take down the deranged Dr. Curien who has created an army of genetically engineered monsters. There are multiple scientists still alive in the mansion which you can save – or kill – during your mission, adding a bit of an extra challenge to each playthrough. As you progress so too will the enemies, who quickly become much tougher and attack in larger groups. There are only four chapters and the game flies by but is made for repeated playthroughs. Saving all scientists in a single playthrough will unlock the armory in the final chapter, which then places crates with new weapons in each chapter which you can unlock on subsequent playthroughs.

House of the Dead Remake can be played with a friend and can be set to either be a cooperative or a competitive experience. You gain points from each enemy killed, with extra points for killing an enemy quickly. Those points not only determine your place on a leaderboard but can also be used to unlock additional continues if you run out of your allotted amount. If at any time you run out of continues and points to purchase more with, then it’s game over and you are thrust back to the main menu. Thankfully, you can immediately launch a new game and begin at any chapter you’ve previously unlocked, so a game over is more of a minor inconvenience than a real setback.

House of the Dead Remake boasts difficulty settings for nearly every type of player, from the most casual to those that happen to be a glutton for punishment. There are four difficulty levels to choose from: easy, normal, hard, and arcade mode. Arcade mode throws an insane number of enemies at you at all times, which is sure to cause many to remember the stress that they felt years ago when standing in a smoky arcade spending their entire allowance in hopes of finally completing the game. While there are multiple settings to help balance the game for all players, quite possibly the most useful setting you can toggle is auto-reload. On your first playthrough you’ll be equipped with only a handgun capable of six shots which leads to you reloading approximately every two seconds. Sure, you could argue that using the automatic reload setting is cheating, but I had a lot more fun with House of the Dead Remake when I could focus solely on killing enemies rather than reloading. 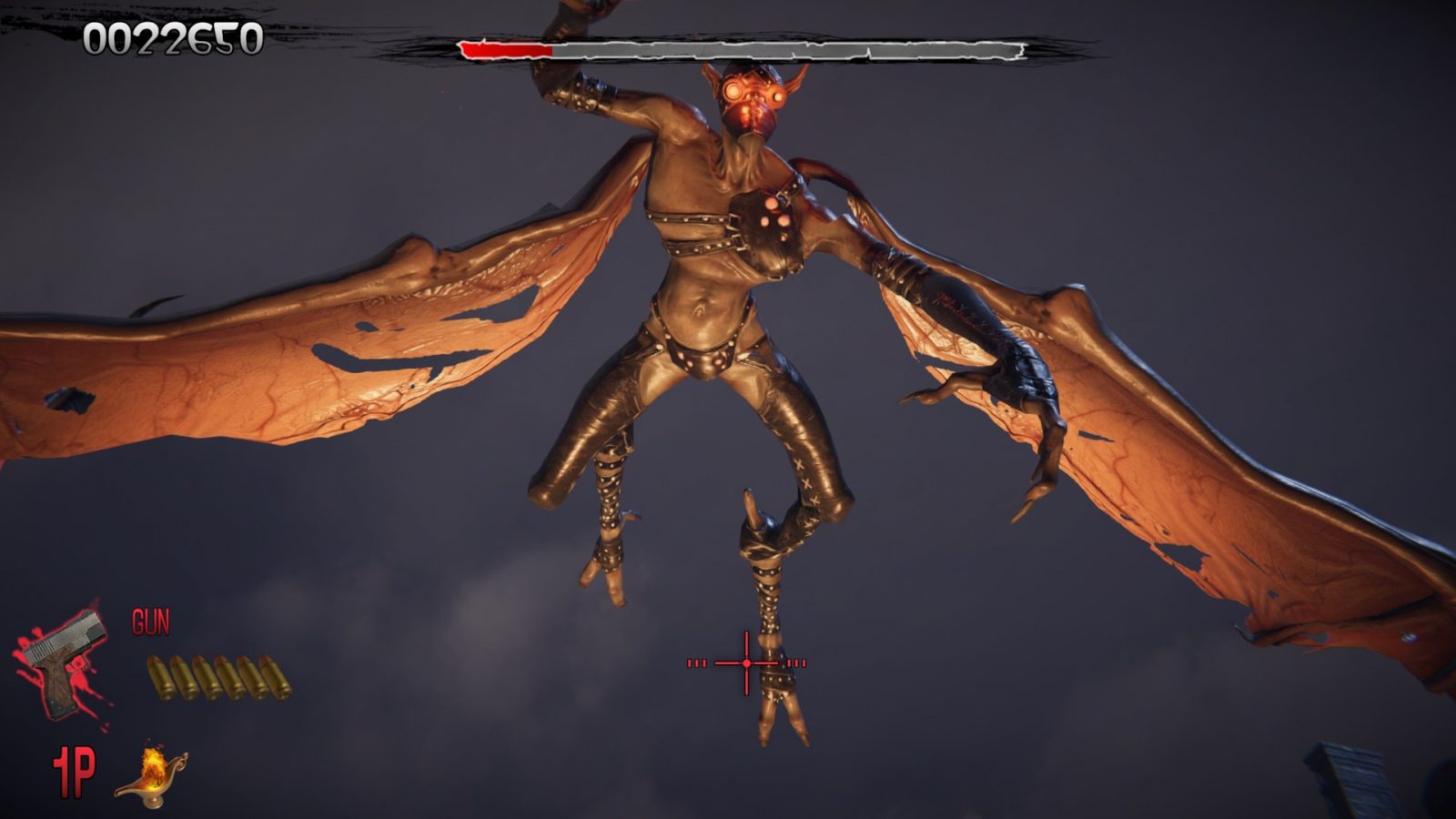 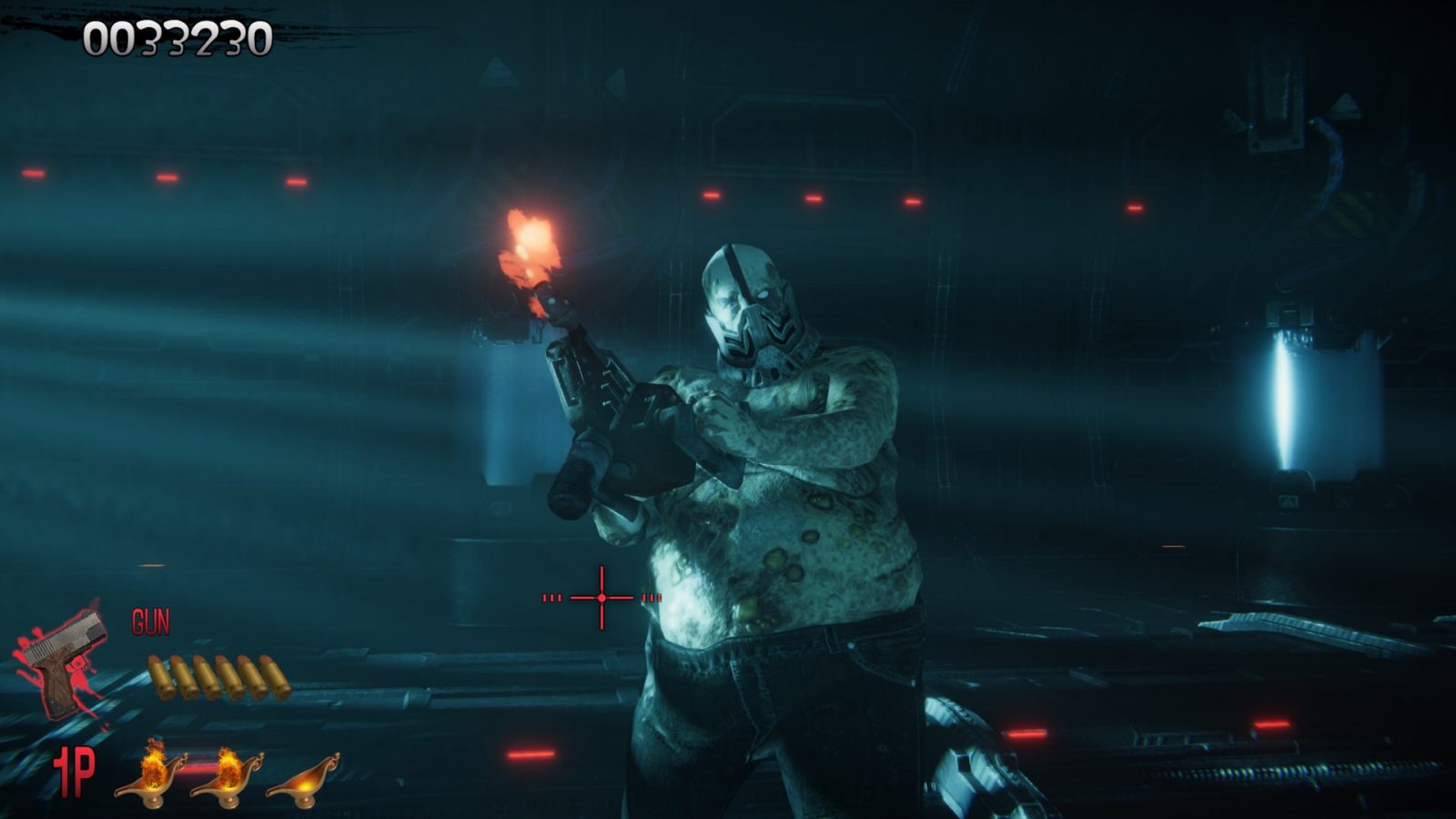 There are two modes available, classic and horde. Classic mode is the main game, which runs about 35 minutes a playthrough and can be played with one of two characters; Thomas Rogan or Agent G, both of which have slightly different dialogue and reactions to the events which occur, but which character you choose ultimately doesn’t change the outcome of the game much. To keep gameplay fresh, there are a few sections with divergent paths to choose from which often lead to new areas and enemies. Horde mode is a much harder version of the game where countless enemies are thrown at you (or you and a friend), while you attempt to survive. This mode is not recommended to new players and in fact, should not be tackled until you’ve completed the game with both characters and unlocked the armory.

When not playing the main game, you can check out the gallery, which allows you to view details about every monster encountered, your badges earned for your in-game achievements, and the armory, or you can check out the statistics screen which provides you with a multitude of stats from throughout all your playthroughs.

Aside from the updated graphics and unlockable weapons, there isn’t much new to experience in House of the Dead that wasn’t there in the original arcade release. I would have loved to see new content or even the sequels bundled together, but as it is this is a faithful remake of a 25 or so year old game and is fun for a quick run through either solo or with a friend.

The House of the Dead: Remake

House of the Dead Remake is a fun, quick romp perfect for a night in with a friend, but will most likely wear out its welcome after a couple of hours. The HD graphics help update the game to the modern era while the addition of unlockable weapons, a horde mode, and multiple difficulties help to extend a rather short campaign, but still doesn’t offer much reason to continue playing after you’ve completed the game a few times. The thing I was excited for the most, the motion controls, ultimately became my biggest disappointment and I can’t help but feel that there was a huge missed opportunity to not package the game with a gun peripheral. Still, the core game remains fun despite being released over 25 years ago.

Richard Allen is a freelance writer and contributing editor for various publications. When not writing for Gaming Trend you can find him covering theatre for Broadway World, movies and TV for Fandomize, or working on original stories. An avid retro gamer, he is overly obsessed with Dragon's Lair. Chat with him via @thricetheartist on Twitter and @richardallenwrites on Facebook and Instagram.
Related Articles: The House of the Dead: Remake
Share
Tweet
Share
Submit