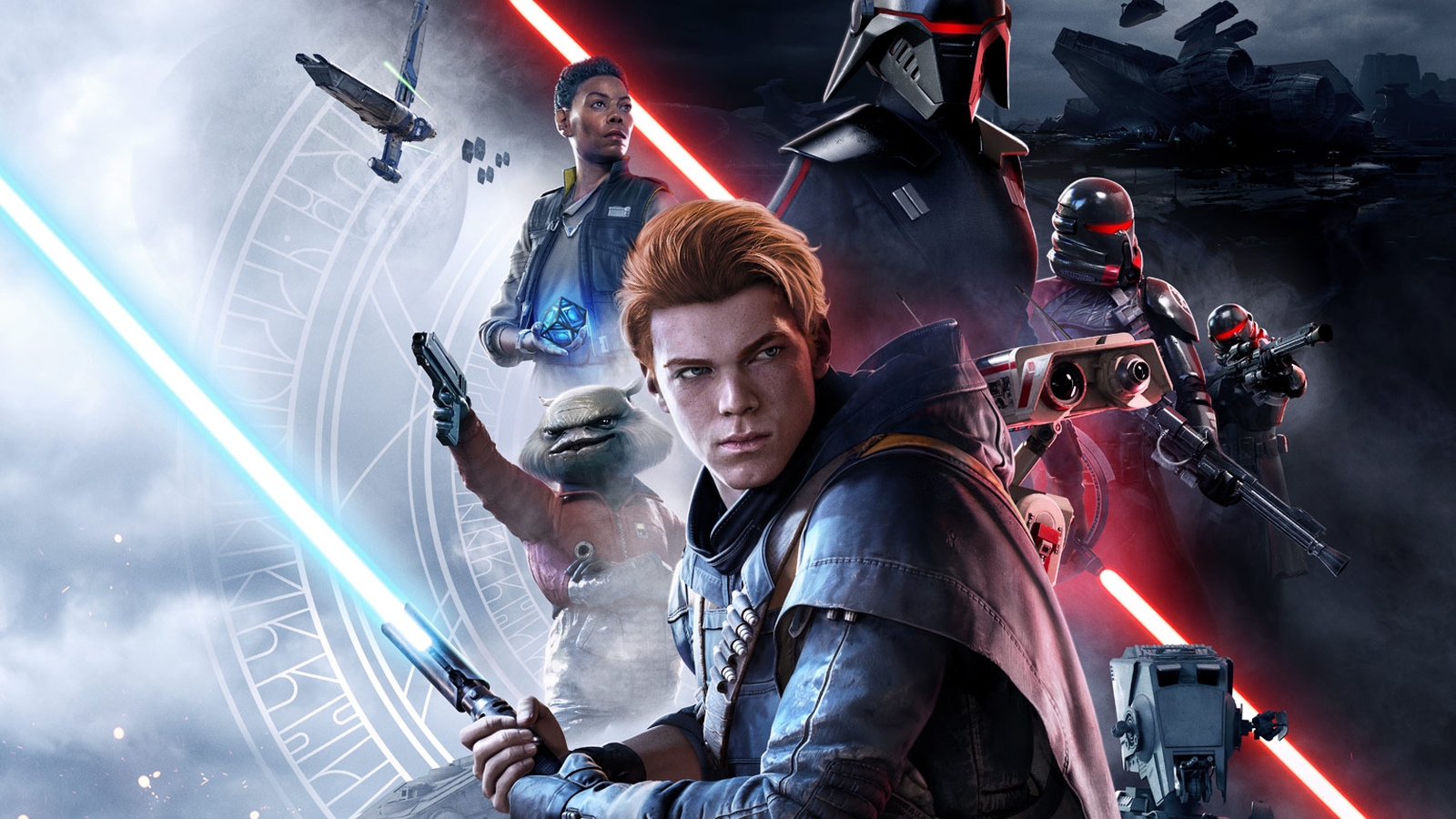 If you are a Star Wars devotee, you know that the books unlock a world well beyond the movies. These side stories are the webbing in between that make the whole universe come to life. Star Wars Jedi: Fallen Order is one of these stories. Taking place five years after Emperor Palpatine unleashed Order 66 to destroy the Jedi, Fallen Order tells the story of a former Padawan, Cal Kestis. Cal has been hiding out on the planet of Bracca having joined a scrapper crew. As he and his Abednedo friend Prauff cut up crashed Star Destroyers and remnants of the Rebel Fleet, an accident happens forcing Cal to use his long dormant fledgling Force powers to save Prauff’s life. Unfortunately, the Empire’s Inquisitors immediately recognize this reactivation of the Force, sending their most ruthless Jedi hunters, the Sisters, to find and destroy him. Narrowly avoiding disaster at the hands of The Second Sister, Cal is rescued by two mysterious individuals, Cere Junda and Greez Dritus. Now, the trio find themselves headed to the remote planet of Bogano to investigate an ancient vault that could not only reawaken Cal to Force, but also as a desperate bid to restore the Jedi Order.

As always, I’ll be as delicate as I possibly can be with regards to spoilers. That said, there are several videos throughout this review that showcase the game’s first five hours, some of it in totality. That said, the written review will be as spoiler-free as possible.

Since it’s first and fore in many minds, I’m happy to report that Star Wars Jedi: Fallen Order is a fully complete game with zero microtransactions or multiplayer distraction, representing some of the best single player action a Star Wars game has ever received. Part story-driven action, part exploration-based platformer, Fallen Order takes the best parts of games like Metroid Prime and Seikiro: Shadows Die Twice and blends them in a way that is preeminently well written, accessible, engaging, and everything I hoped it would be.

Cal is essentially an unfinished Padawan who pushed away from his connection to the force. It creates a great atmosphere for natural power progression you’d expect. Before we dig into that progression, however, let’s talk about mechanics. Combat in Fallen Order is delivered with light and heavy attacks, with the shoulder buttons, triggers, and other face buttons providing blocking, combinations, and force powers. Perfect blocks lets Cal unleash a fatal attack with his lightsaber that will end all but the most powerful and armored foes. “Thoughtful combat”, specifically patience, blocking at the right times, and delivering combinations of saber and Force powers becomes important quickly. Blocking is a critical skill for Fallen Order, and it’s tied to a meter for both Cal and the enemies he faces. While the troopers you encounter at the beginning of the game can be overcome with brute force, it doesn’t take long before you start running into enemies that will deflect, stun, and otherwise force you to slow down and patiently approach each interaction. A lone Stormtrooper isn’t much of a threat, but two in the distance using rocket launchers, another four slightly closer using blasters, another using a shielded heavy blaster rifle (read: machine gun), a handful of Scout troopers using Z6 riot control batons, and all being lead by a black armored Purge Trooper with a double sided shock stick and no compunction about breaking your guard and you suddenly find yourself in serious trouble.

When you do take damage, your pal BD-1 can give you a stim to heal, but refilling BD-1’s supplies requires a quick stop at a meditation point. Doing so causes all enemies to respawn — the Dark Souls or Sekiro: Shadows Die Twice vibe I mentioned earlier, minus the extreme difficulty. Remaining highly approachable at normal levels, the game has four difficulty settings to accommodate whatever level of pain you prefer.

As Cal is still a Padawan, his connection to the living Force is, at best, rusty. As such, he starts with only one power — Force Slow. In another Souls connection, Cal’s progression is accomplished through gaining XP and then spending time in contemplative meditation. Whenever Cal finds a moment’s peace and a proper meditation point he can access the interlocking skills that represent his wider connection with the Force. All of the powers you unlock via combat and gaining experience are combat focused. Powers that allow greater traversal and open new areas are only gained through progressing the storyline. As you explore, you’ll also find upgrades for your “buddy droid”, BD-1.

As far as I’m concerned, Titanfall 2’s massive Titan, BT-7274, stands for “Best Titan”, so it’s no surprise that BD-1 stands for “Buddy Droid”, and boy is he. Riding on your shoulder, this little guy is able to rummage through boxes and find cosmetic upgrades for your saber, clothes, and even your ship, The Mantis. He’s also able to help you traverse ziplines, slice electronics (read: hack in Star Wars parlance), and more that I won’t spoil as the game goes along. He, as much as your force powers, is key to your traversal through the universe. While he may not say much beyond beeps and boops, he’s also very much key to the storyline of Star Wars Jedi: Fallen Order.

Opening the map in Fallen Order we see the other aforementioned inspiration — Metroid Prime. BD-1 projects the map for Cal, showing him nearby platforms, alcoves, caves, and structures he has uncovered. As an improvement over the Metroid Prime series, it also designates objects and areas that Cal doesn’t have the right powers to access. By doing so, the game keeps the pace moving forward as you won’t spend your time backtracking to an area marked in red until you pick up a new power and the game then marks it green.

With another nod to Souls titles, when you eventually die you’ll lose all of the XP you’ve gained since committing your last skill point. The creature that slayed you will be marked with a special color so when you return to where you died you’ll be able to visually spot whatever killed you. Taking out whatever took you down also restores any XP you lost, as well as refilling your life and Force back to their maximum. Who said Jedi can’t enjoy a little revenge every once in a while?

Beyond combat, Star Wars Jedi: Fallen Order is about exploration. Each world contains a wealth of collectable objects to find. There are five different classes of customization for your lightsaber including color, emitter, switch, sleeves, and material finish, for a total of 68 that I can see (colors are hidden until found). Additionally, there are seeds for Greez’s terrarium on the Mantis, 23 different ponchos for Cal with five outfits to go under said poncho, and 12 paintjobs for the Mantis. Finding these objects, as well as saber upgrades, Echos (which are memories from objects Cal finds in the environment), and secret boosts to your health and force total are scattered everywhere. Just when you think you’ve completed a planet, you’ll end up back there with another mission that was behind a previously locked area. It felt less like backtracking, and more like additional exploration in a lush and compelling world. If immersion is the aim, they hit the bullseye like blasting a womp rat with a T-16.

As Respawn has embraced RTX, the lighting in Fallen Order is absolutely flawless. Holding your lightsaber aloft serves to light darkened corridors and caves, and it never wore thin. Lights and shadows bend around objects in the environment, and when you square off in lightsaber battles it is truly a thing of magic. I’ve gotta tip my hat to the team on Cal’s hair too — he does look fabulous.

There are two technical hitches that do smudge the otherwise flawless execution of Fallen Order. My PC is bleeding edge, using a Gen 3 M.2 SSD capable of reading and writing 3000MB/s, and a 2080Ti rendering all these beautiful graphics. Still, and likely a consequence of the Unreal Engine 4 that powers the game, there are occasional hitches. They don’t impact gameplay, but hitches in presentation to mask loading breaks immersion. There’s no rhyme or reason to it, as I’ve seen it during landing sequences approaching a planet, but didn’t see it the second time I made the same landing later. It’s truly a nitpick, and as you can see in the videos above, the game is absolutely rock solid and gorgeous at 4K/60. As is often the case with games that use Havok for physics, you’ll find enemies jittering or nodding their head after perishing, or the occasional Stormtroopers wiggling a little more than they should once adequately sabered. It’d be nice if Respawn could exterminate these last few bugs, but the game’s presentation is otherwise flawless.

In all, Star Wars Jedi: Fallen Order clocks in at roughly 20 hours to complete, but when I finished the main campaign I still had large swaths of planets to further explore. The only thing I knew is that wanted more. Not unlike their work with Titanfall 2, Star Wars Jedi: Fallen Order stands as one of my favorite games of 2019, and easily a front runner for Game of the Year. The force is very, very strong with this one.