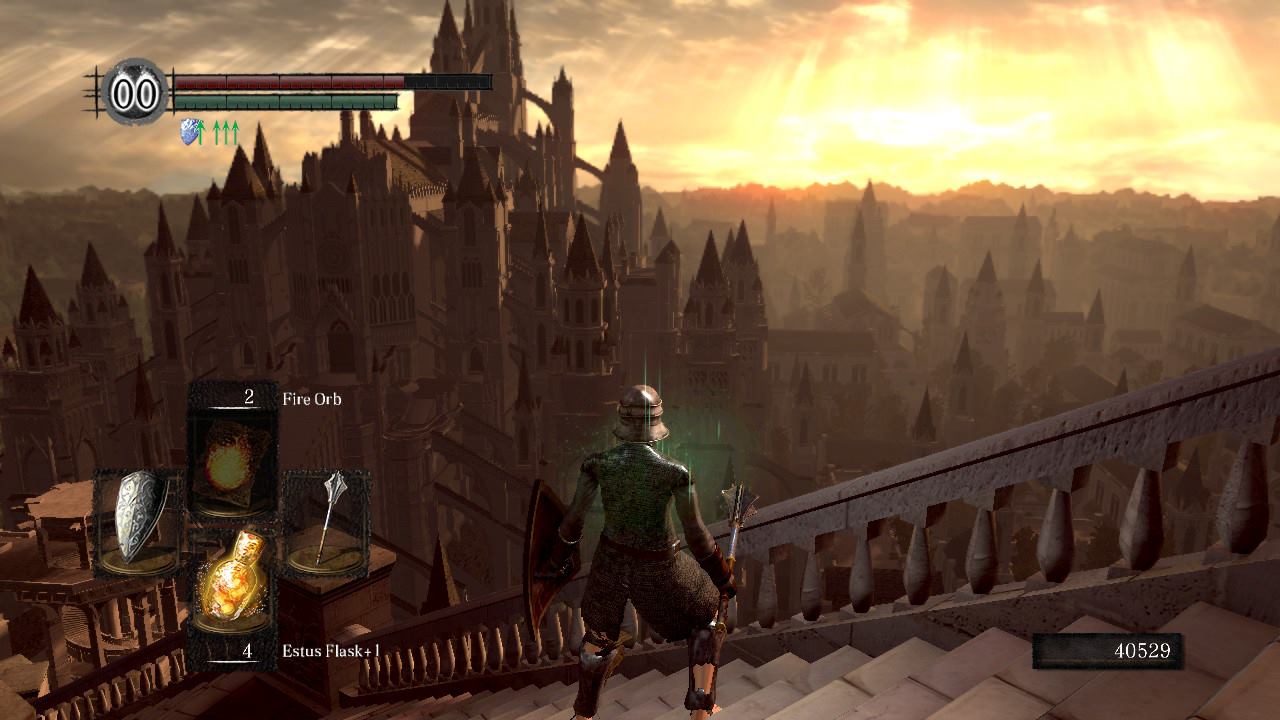 Even if you haven’t played Dark Souls, you know about Dark Souls. You probably know that it’s near-universally acclaimed as one of the greatest games of all time. You may have seen fan art, lore discussions, or critical analysis by the game’s legions of adoring fans, some of whom have made a living out of their love for the game. You’ve almost certainly played a game inspired by Dark Souls in some way or another. You’ve likely heard breathless descriptions of the game’s relentless difficulty and soul-crushing cruelty, which are true to some extent, but also the least interesting parts of the game by far.

Despite being seven years old, Dark Souls feels just as original and just as satisfying today as it did upon release. Earlier this year, Dark Souls: Remastered was released on PS4, PC, and Xbox One, offering an easier way for new consoles to experience the game. With its October 19 release on Switch, Dark Souls: Remastered is now available on all modern consoles, potentially bringing the dark epic to a whole new audience.

Dark Souls has inspired so many praise songs that trying to find an original way to examine its greatness would be like telling someone that you’ve heard a pretty good band called the Beatles and thinking that you were breaking the news to them. Basically, every good thing you’ve heard about Dark Souls is probably true. Its level design — the dread-filled twists and turns that make up each location, the immaculate environmental storytelling, the way the world’s highest peaks and lowest gutters eventually intertwine — is unmatched, even by its own sequels. Its combat is exacting and precise, rewarding dozens of painful failures with a final well-earned victory. It would be almost impossible to beat Dark Souls without feeling like you’ve accomplished something amazing. It’s a game that pushes the player away at every turn, obscuring everything from its story to its most basic mechanics, but makes the struggle to uncover its secrets well worth the effort.

FromSoftware’s grim masterpiece may once have seemed spectacularly ill-suited to the traditionally cheery Nintendo, but the age of “bring everything to Switch” has opened the doors for all sort of unlikely games on the company’s newest console. Bringing Dark Souls: Remastered on board is undoubtedly a good move for Nintendo. It gives the company a major title to push its new online service, invites in players who may have been turned off by Nintendo’s wholesome reputation, and helps to fill the long gaps between its major first-party releases. The real question may not be whether Dark Souls is right for the Switch, but whether the Switch is right for Dark Souls. I felt some initial trepidation myself (did I really want to have horrors like the Gaping Dragon inches from my face, flanked by two brightly colored Joy-cons?), but after completing my journey through the dismal, labyrinthine world of Lordran, I was pleasantly surprised by how at home Dark Souls felt on the Switch.

Dark Souls is in many ways defined by its atmosphere. The world you move through is gloomy and decaying, and every step seems stolen from a place that wants nothing more than to see you dead. Playing Dark Souls for the first time is an unrelentingly tense experience, demanding constant attention, unerring reflexes, and supernatural patience as you dash furtively from bonfire to bonfire, the only places in the world where you’re truly safe. It seems antithetical to the way that people usually play handheld games: on the train to work, on the couch during commercials, in bed just before falling asleep. Being able to suspend and resume a game in seconds (available on all modern consoles, but none of the platforms the original Dark Souls was released on) means you can quickly jump into the game without sitting through its lengthy series of startup screens, and being able to take the Switch with you takes things one step further. You don’t need to make an appointment with Dark Souls anymore; you can just take it with you. To purists, that may be anathema, but it certainly makes the game more approachable for everyone else.

While a handheld Dark Souls may have once raised concerns about performance, the Switch has proven itself more than up to the task. In handheld mode, the game runs at 720p and 30 frames per second, the same as its original release. In docked mode, that jumps to 1080p and 60 frames per second, a considerable improvement, but still well below the 4K resolution that the game supports on all other platforms. Fortunately, the game runs well in both configurations. I caught some brief, occasional slowdown when the screen was full of particle effects, but not enough to affect gameplay. Even the notoriously stuttery Blighttown runs smoothly. The price for this performance is a decent battery drain when the console is in handheld mode, but you can still easily get a few hours in between charges.

Aside from the boosted resolution and framerate, don’t expect many changes to the graphics. The biggest “upgrade” is a change to the lighting, which may be the most controversial part of the remaster. In many ways, Dark Souls is as much about the feeling that playing it gives you as it is about the gameplay itself. A large part of that comes from the lighting, foreboding and hazy in some places, supernaturally bright and clear in others. At times, it seems like you’re seeing the world at the bottom of a dirty lake; even the air looks oppressive. It works well for Dark Souls, but the muddy effect it imparts could be mistaken for a simple lack of fidelity. At least, that’s what the remaster seems to suggest. A lot of the more atmospheric effects have been stripped out, replaced with more traditional lighting. It does lend the game a certain clarity, but renders some areas a little more sterile.

Dark Souls was always an uneven game. Since the game offers little in the way of a path for you to follow, its pace can sometimes slow to a crawl as you try to work out where to go next. And while the first half of the game pulls players along on a grand journey through a fallen kingdom, the second half is more of a whirlwind tour, sending you to eliminate bosses in disparate corners of the world. More detrimentally, the game is riddled with bugs, rough edges, and sections that even the game’s director has lamented leaving unfinished. Enemies regularly clip through walls, sometimes disappearing entirely into them and dying or attacking you through solid objects. NPCs can be removed from the game for inexplicable reasons. While some bugs from the original may have been patched out in this latest release, plenty remain. This is the area where the remastered could have been improved the most easily.

There are some minor changes to the remaster, such as adding password-based multiplayer sessions, bumping the total number of players allowed in a game from four to six, and making other tweaks to multiplayer. (Servers weren’t live as of this review. You can read our multiplayer follow-up here.) You can also switch covenants (which determine the rules for multiplayer matchmaking as well as offer some unique items and abilities) at bonfires, rather than needing to trek across the map to do so. The remaster also includes the DLC Artorias of the Abyss, which was also part of the PC’s Prepare to Die edition. This adds a whole new area with its own suites of bosses, some of which are considered to be among the best in the game.

Even if you haven’t played Dark Souls, you know about Dark Souls. But knowing about it and experiencing it for yourself are two vastly different things. It’s impossible to truly convey the game’s forlorn majesty to someone who hasn’t played it. If you’re turned off by all the talk of how grueling Dark Souls is, know that the game will always yield to a player who is patient and clever enough to outwit it, and the wealth of knowledge about the game online has revealed even its most shrouded mysteries to anyone with an internet connection. Its re-release is likely to make the game’s online component more active than it has been in years, making it a great time to get help from helpful phantoms online. And now that Dark Souls: Remastered is on the Switch, you have more control than ever over the pace of the game. There’s a reason why Dark Souls is often cited as the pinnacle of the medium, and now there’s no reason not to find out why for yourself.

Dark Souls: Remastered doesn’t add a lot to the Dark Souls formula, but then again it doesn’t need to. Its graphical updates are subtle, and sometimes dubious, and the tweaks it makes to the game will only be noticeable to the already converted. But a refreshed pool of players means more opportunities for jolly cooperation, and the Switch makes it more convenient than ever to play the sometimes unapproachable classic. For better or worse, Dark Souls: Remastered is essentially the Dark Souls you already know on a new platform.

A committed indoor kid, Bryan moved from Pittsburgh to Los Angeles for a prettier landscape to ignore. They can be lured outside with promises of taco trucks and film festivals, and enjoy trawling through used book stores for works on the occult. Bryan has been gaming since the SNES era and is a sucker for good pixel art.
Related Articles: Dark Souls: Remastered
Share
Tweet
Share
Submit