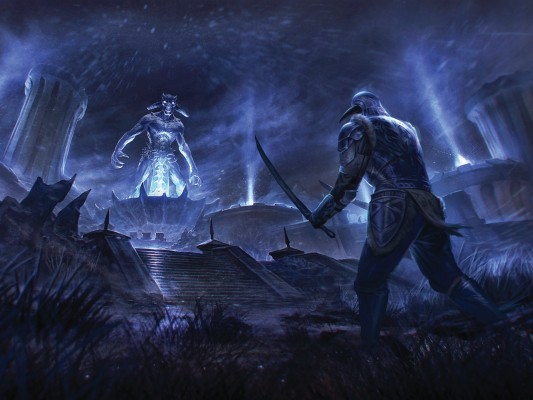 Readers of Gaming Trend are pretty well aware that I’m a sucker for game artwork – it’s why I buy Collector’s Editions of games. It’s not the awesome figures (though those are pretty cool), or even the in-game goodies – it’s the peek behind the curtain at the guts that make up the concepts of a game. Artwork is the lifeblood of any game, providing a foundation on which the final product is built. When a game like The Elder Scrolls Online comes your way, the potential of looking behind 20 years of curtain is too hard to ignore.

Insight Editions has tackled the impossible task of selecting just 40 pieces of art from the vast array of incredible artwork that comprises The Elder Scrolls franchise. From high resolution CGI renders to incredibly detailed pieces of hand-drawn artwork, these 16”x12” posters represent the most iconic pieces of Elder Scrolls imagery.

The 40 posters are bound into a semi-solid cover meant to protect the contents. With a binding on one edge, if you don’t remove the posters this serves as a gorgeous artbook. The collection itself starts off with some of the imagery we’ve seen from the early announcements of the game. The sigil of the Ebonheart Pact, Daggerfall Covenant, and Aldmeri Dominion are flanked by the frequently-seen dual-wielding Nord barbarian, the spell-slinging High Elf sorceress, and the cloaked bow-using Bosmer Nightblade, both as a trio and individually.

As you progress through the posters, the focus shifts from the classes to the heavily-varied environments in the world of Tamriel. The color saturation in these images is top notch, and quite a few of them are very worthy of a frame and display. There is an image in the pack of a swamp outside of (if my lore is correct) the city of Elsweyr that features an incredible contrast between the deep blue water pooled near a waterfall and a rich red set of trees and bushes in the fore and background.  You can see it below:

Of the posters in the set, there are a few that really stick out for me. The clear favorites for me are the CGI renders of the three warriors previously mentioned, as well as the hand-painted picture of the High Elf female warrior commanding her troops. The Khajiit, Bosmer, and Templar poster shows some great balance and variety in one piece of art. I think the undead army with Molag Bal looming large in the background is even better than the limited edition one that Bethesda Softworks was giving away. There is a second poster devoted to the dark deity showing an armored dual-wielding warrior squaring off against the impossible odds of battle. Truthfully, there isn’t a bad piece of art in the bunch.

I was surprised to see only one poster devoted to a major focus of The Elder Scrolls Online – the fight for the throne. The poster shows an epic battle between the three factions in Tamriel in their clash to control Cyrodiil as a floating portal is ripped from it’s chain moorings in the background.

If there is one detractor to this excellent package, it’s that these posters are double-sided. This, no doubt, was to keep printing costs and package size low, but it does mean you may have to choose when you find your own favorites. The previously mentioned High Elf female warrior is opposite my top choice in the female spellsword that we’ve seen in the CGI trailers.

Bethesda Softworks and Insight Editions were kind enough to provide high-resolution images of these great posters for us to share.  I’d be remiss if I didn’t include them.  A big thanks to both companies for making them available. 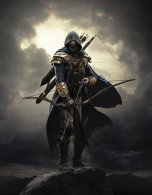 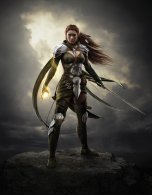 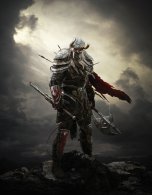 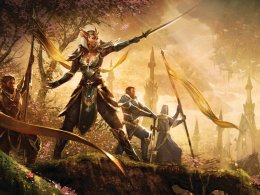 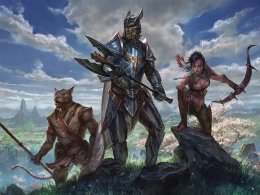 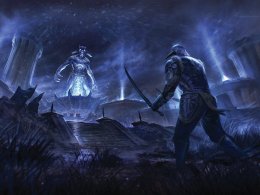 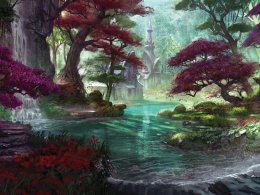 Overall, it’s very easy to recommend this poster set to any fan of The Elder Scrolls, regardless of what you think of the series making inroads into the MMO space. For an MSRP of just $24.99 (and I’ve seen it on sale on Amazon for less), it’s a no-brainer for anyone who appreciates incredible art.