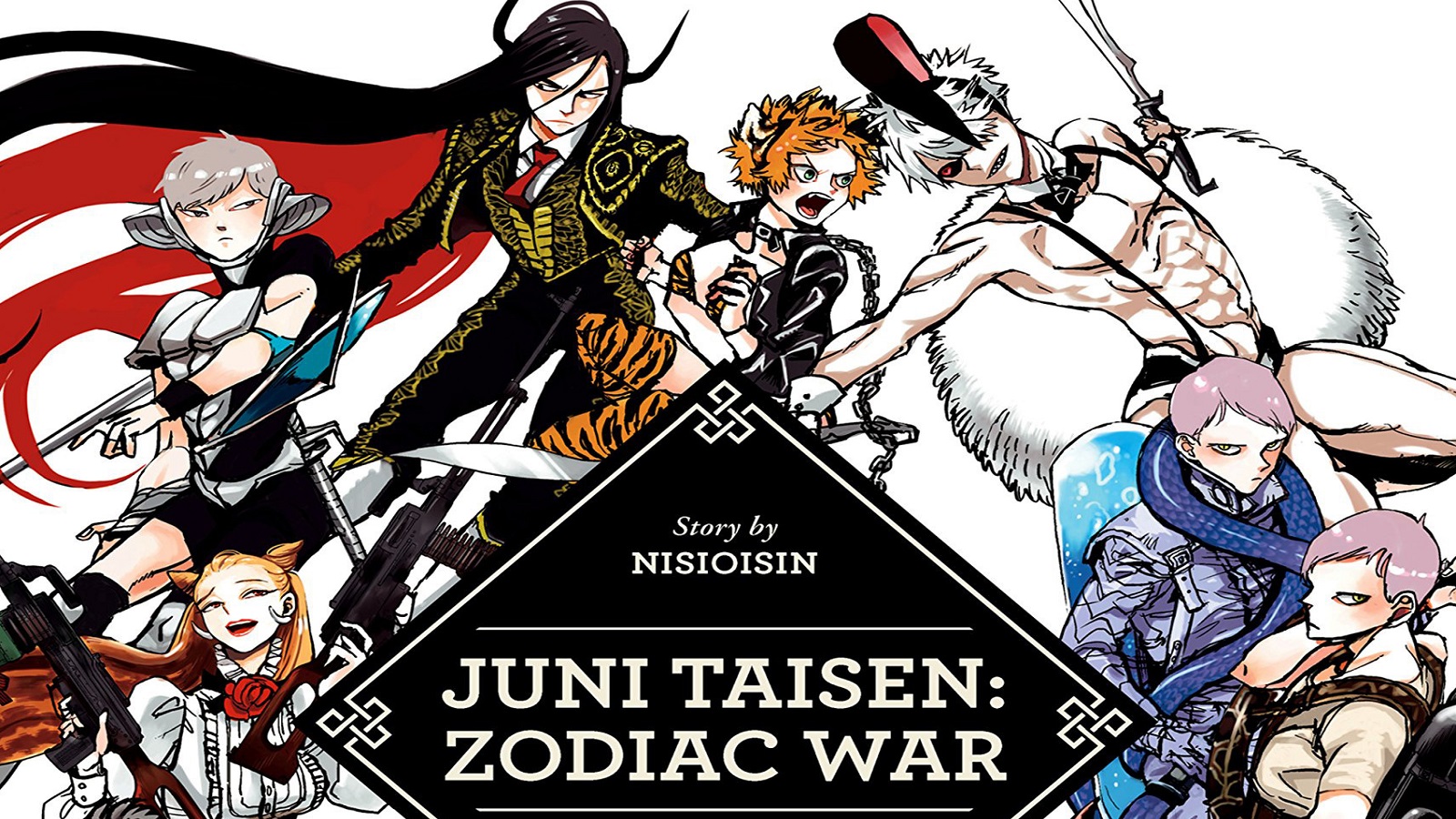 Thrills, chills, kills! Who will win this sadistic war?

From dystopian works like Battle Royale and The Hunger Games to some psychological thrillers like Mirai Nikki/Future Diary, I can’t get enough of free-for-all elimination works. The litany of characters and motivations mixed with some hope that a forgone conclusion could be subverted keeps me coming back to these premises, and the recent anime Juni Taisen: Zodiac War captures the thrill of the kill this fall. Viz Media recently released the original light novel that the anime is based on, and it’s a quick yet engrossing read that fans of the anime should experience.

In a distant future, an event takes place on a global scale: Every twelve years, the Zodiac War causes the government to level an inhabited city in order for twelve fighters from different nations to duke it out in a free-for-all battle. The last fighter standing wins any wish they want, and the war must achieve a resolution soon, as each fighter ingests a poisonous jewel that will kill them after twelve hours. The fact that a whole city needs to be exterminated (not evacuated, a point the narration seems to hammer into readers’ heads) in order for this tournament to work heightens the gravity of the situation. In order to grab each of their jewels, the warriors must extract their opponents’ by any means possible (which, as expected, can lead to some gory results). Each fighter is referred to after an animal of the Chinese Zodiac (Rat, Ox, Tiger, Rabbit, Dragon, Snake, Horse, Sheep, Monkey, Chicken, Dog, and Boar), and each have different catchphrases and abilities. Because it’s an honorable affair, each fighter will have to recite their catchphrase before each match. It’s a cool throwback to fighting games, and sets the stage for these fights nicely.

Each “battle” is divided into a few chapters each, as it chronicles a different protagonist that’s participating in the war. I did appreciate how Nisioisin uses this framing technique to switch the perspectives and delve into their backstory more. Each fighter’s design and personality is unique from the others, from the pacifist negotiator Monkey that wants the war to end with no deaths (and who kills in peace) to the stoic and battle-hardened Ox (who just kills, and has no special ability whatsoever). While they closely match their Zodiac counterparts, they’re given enough characterization to diverge from their archetype. The included profiles and character art also shed light on their appearances and hobbies; did you know the elderly Sheep loves smartphone games (and was the victor of the ninth Zodiac War?) These descriptions also fulfill the role of world-building the society outside the war itself, which humanizes the cast quite nicely; as they’re almost all either murderous criminals or experienced fighters that need to kill during this event, it’s a great juxtaposition to give them some lighthearted moments in these paragraphs.

The battle breakdown gives a sense of dramatic irony to the reader: As some deaths and events happen outside the other fighters’ perceptions, the focus character might not know who’s still remaining, and will make different decisions because of this omission. However, because the reader knows what happened previously, it does make for a tense situation when reading further. In an early example, one chapter has Monkey talking with a fighter, which causes said fighter’s death afterwards due to the transformative arguments Monkey presents. While she and Rat discuss the philosophical implications of the conversation, the reader knows said fighter was killed earlier, so it changes the mood of the interaction. It’s these minor things that really add to Juni Taisen’s engrossing story elements.

However, this narrative structure has some drawbacks, namely the fact that it’s assumed that the characters introduced early into the story will unfortunately be a little underdeveloped due to not having much screentime after their initial appearances. That doesn’t mean they’re necessarily irrelevant to the story, due to one character’s special ability making fallen fighters reappear. By the middle of the story, you might already know who will be victorious due to the mythological inspiration of the light novel, which isn’t a dealbreaker, but may be a tad predictable if you’re the type that would rather be surprised by reading plot twists. The world that the Zodiac War is presented in is also unknown to the reader, aside from some cursory events that occur in the middle and of the end of the novel, even with some of the aforementioned world-building elements. What could have happened in the world to make the Zodiac War important enough to commit genocide in a town with no notice whatsoever? It’s this main question that remains unanswered, and I feel like it could have been mentioned and delved into within the story. As it stands, it’s a glaring omission that leaves me wanting more. Even the ending of the story just finishes the book without much exposition afterwards (though a manga epilogue was included in a currently Japan-only anthology).

The area where Juni Taisen: Zodiac War shines is its action scenes. For a light novel (which normally glosses through events quickly), it fleshes out the visceral and sometimes bloody descriptions of battles, with characters getting cut up and blown to bits in very creative ways. It’s not for the faint of heart, but these scenes were entertaining and very descriptive. The opening battle between Boar and Rabbit as well as the endgame battle with Ox and Tiger and two foes were the highlights of the light novel, and were well-written (in the case of the localization, well-translated). This is something that I hope gets expanded upon in a sequel, should it ever reach western shores. The official endgame (which is denoted within the novel) is also a strong point, as it emphasizes the remaining cast quite nicely, and is more manageable to have a handful of characters rather than a dozen people running around.

While a little light on in-universe elements outside the central conflict, Juni Taisen: Zodiac War is a thrilling action story with high-stakes battles and an interesting cast of fighters. This is a great light novel for those that want balls-to-the-wall action and nonstop thrills.

Elisha Deogracias is an aspiring accountant by day, freelance writer by night. Before writing for Gaming Trend, he had a small gig on the now defunct Examiner. When not being a third wheel with his best friends on dates or yearning for some closure on Pushing Daisies, he's busy catching up on shonen manga and wacky rhythm games. Mains R.O.B. in Smash. Still doesn't know if he's a kid or a squid.
Related Articles: Beyond the Page, Juni Taisen: Zodiac War
Share
Tweet
Share
Submit