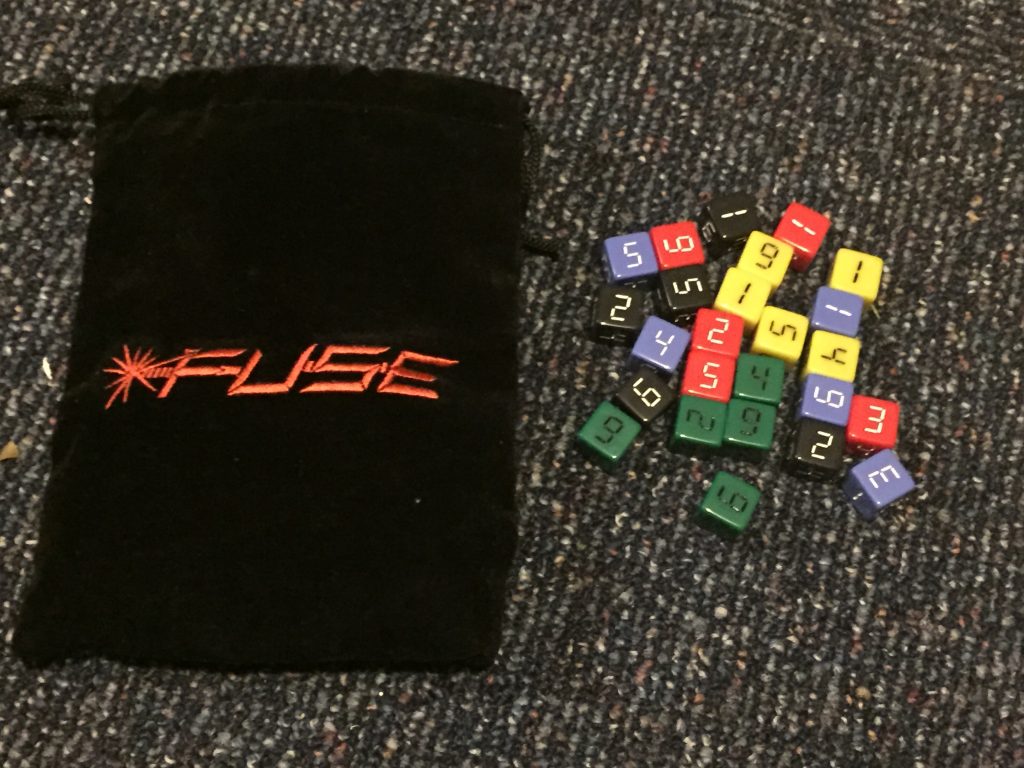 Sometimes a game comes along and looks so simple that it won’t be that interesting. Rolling dice can be a lot of fun, but it takes the right mechanic to keep it interesting for the long term. When I first saw FUSE, I thought that it would be a nice distraction. What I found was a game with wide appeal.

The objective of FUSE is to resolve bomb cards played from a deck. These cards have different difficulty levels and are resolved when enough dice are placed on them to finish their objective. The dice come in five colors with five of each color. To win the game, you need to get through the bomb deck, with the number of bomb cards determined by the difficulty level the team sets. The setup for the bomb card deck is probably the most time-consuming part of the game, so if you want to play it multiple times in a row I would recommend just using the same bomb cards for a few games and then switch them up with others from the box.

The instruments of your success or failure, along with the included plush dice bag.

The easier bomb cards may require three dice different by color or number rolled, dice with specific numbers or colors, or solving a simple math equation. The more difficult bombs may require you to stack four dice in a specific order of number or color, or create a stack of dice in a pyramid formation of specific colors or numbers. Each player starts with two bomb cards in front of them, with five bomb cards laid out in the middle with the remainder of the deck next to those cards. The intuitive iconography makes it easy to figure out the card objective, so teaching the game doesn’t take long.

Once the bomb card has the necessary dice on it, the player puts the card to the side and adds those dice to the dice bag. Then the player chooses one of the face up bomb cards in the middle and draws a new one from the deck. There definitely is a strategy to which bomb card to take, as you don’t want two high-difficulty cards in front of you at the same time if you can avoid it.

The bomb cards to defuse, along with the fuse cards that can blow up your plans.

Throughout the bomb deck are fuse cards. These cards show either a color or number. When these cards come up, everyone must take a die of that color or number and return it to the dice bag. These cards can send the team’s progress back significantly, so finishing the bomb cards as quickly as possible is important.

The game might sound like a stroll in the park, but that’s where the twist comes in. Your group only has ten minutes to deplete the deck of bomb cards. You can’t dilly dally making your decision because you don’t have time to. Sometimes this forces the group to look at their cards and work together to get everyone to take a die. However, sometimes one person has to make a decision where the dice go to keep the game moving. Ten minutes may seem like a lot, but it sets the game at a rather hectic pace. While this may make it seem like it is possible for FUSE to have an alpha gamer problem, one person can’t keep track of all of bomb cards in front of everyone, especially in large groups. FUSE forces you to communicate your thoughts quickly and work out compromises when necessary.

If you have a smartphone, you can download an app for the timer. It has two different modes, basic voice and personality voice. The basic voice just announces the time remaining at specific intervals. For the personality voice, you get to hear several sarcastic and snarky responses. You may want to change the mode depending on the audience you are playing with. I do wish that the app gave you the option to change the time limit, making it easier or harder depending on the players and experience you have. However, finding the app was a challenge. I kept searching for “FUSE” or “FUSE game” and getting incorrect results. You need to look up the Renegade Games Accessories for the download. If you want to use a timer on your phone or from the kitchen, that’s a perfectly viable option.

I’ll admit when I first saw FUSE, I was expecting it to blow up in our faces. I haven’t been enamored with real-time games, and I thought that when I brought this for a game night it would be a nice filler game before playing something with more depth. Instead, we played it for the entire evening, getting better and faster with each play. I’ve even had a request to bring it for a family weekend get-together. If you are looking for a fun, fast, frantic family game, look no further than FUSE.

While not working as a Database Administrator, Keith Schleicher has been associated with Gaming Trend since 2003. While his love of video games started with the Telestar Alpha (a pong console with four different games), he trule started playing video games when he received the ill-fated TI-99/4A. While the Speech Synthesizer seemed to be the height of gaming, eventually a 286 AT computer running at 8/12 Hz and a CGA monitor would be his outlet for a while. Eventually he’d graduate to 386, 486, Pentium, and Athlon systems, building some of those systems while doing some hardware reviews and attending Comdex. With the release of the Dreamcast that started his conversion to the console world. Since then he has acquired an NES, SNES, PS2, PS3, PSP, GBA-SP, DS, Xbox, Xbox 360, Xbox One S, Gamecube, Wii, Switch, and Oculus Quest 2. While not playing video games he enjoys bowling, reading, playing board games, listening to music, and watching movies and TV. He originally hails from Wisconsin but is now living in Michigan with his wife and sons.
Related Articles: Fuse, Tabletop
Share
Tweet
Share
Submit