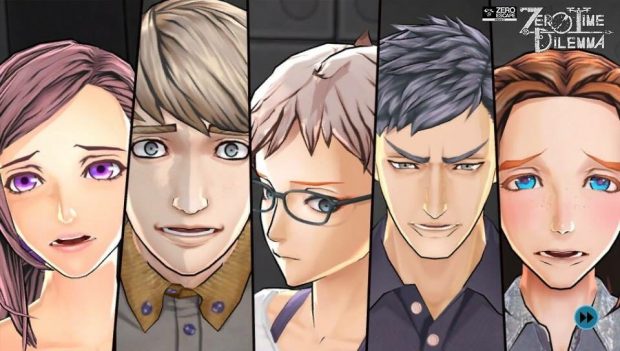 It’s rare to see a game take as many chances in its concluding chapters like Zero Time Dilemma does. For a game with two predecessors’ worth of required reading to appreciate, there’s a great deal of new characters, timeline layouts, and even a switch from mostly text to fully animated sequences.

When the credits first rolled on Zero Time Dilemma, I laughed. It was a perfect end and beginning to the game, almost a nice little nod to fans. By the time I saw the final credits roll, for real this time, I was floored. Somehow, Kotaro Uchikoshi and his team at Spike Chunsoft have brought this series full-circle, to a conclusion that feels not only satisfactory, but reaches beyond the heights of its predecessors.

At the outset, Zero Time Dilemma wastes not a spare minute getting you into the thick of the moral dilemmas the series is known for. After an unceremonious coin flip, nine participants are locked underground in a bunker, forced into a nightmarish Decision Game. Those who have played the prior Zero Escape games understand the overarching consequences of the events taking place here, but there’s more immediate parameters set as well. The only way to escape, these nine participants are told, is when six of them are dead.

For Zero Time Dilemma, the team at Spike Chunsoft decided to make a move to fully animated cutscenes, rather than the visual novel segments of past Zero Escape games. In some ways, this leads to some awkward hitching and robotic animations — it’s clear this is a first outing, in that respect. It’s especially clear in the contrast between systems, as the 3DS often suffers from stuttering frames and visual glitches like clipping models, even with lower fidelity graphics compared to the Vita or PC.

Over time, though, I appreciated the move to animated characters. It added a level of intimacy, spacial understanding, and personality to characters that was previously lacking, or had to exist solely in your mind’s eye. There’s some deeper, more emotional moments in this game than previous Zero Escapes, and I don’t know if they would have resonated with me as much through the simple text and character portraits of games past.

Through the ups and downs of the narrative, the characters are always at the forefront and there’s plenty of faces, new and old, to keep your interest piqued. Of course you might gravitate towards C-Team, with Akane and Junpei trapped alongside newcomer Carlos. Or you might want to immediately delve into D-Team’s story, where Virtue’s Last Reward protagonists Phi and Sigma are holed up with Diana, a crucial character who has remained unseen until this game. Newcomers Eric, Mira, and mysterious “Q” make up the Q-Team, and though they’re a little abrasive at first, it’s easy to warm to them (or at least want to see more) as you proceed through the fragmented timelines.

It wouldn’t be Zero Escape without some time-bending mechanics, and in this game, it comes in the form of events taking place out-of-order. Zero, returning only in namesake, has implemented a new conundrum to the events: every 90 minutes, the contestants of the Decision Game are drugged, both with a sleeping agent and a memory-erasing serum. You bounce back and forth across the teams and timelines, struggling not only to understand what is happening, but when. Choices you make are difficult; a popular one shown in the previews was choosing whether to risk a Russian roulette-esque game in order to save a partner from an incinerator. These are made even more significant when you awake in the next fragment, wondering how certain characters are alive, or how you ended up in that Decision Game in the first place.

This makes for an effective storytelling device, as it better explains and relates the history-hopping nature of Zero Escape’s storytelling. Some frustrations do arise, however, later on in the game. It becomes a little difficult to fish out certain answers to prompts, and navigating the “flow” chart never really felt straightforward. There’s significantly more tools for examining the events as they unfold and piecing together what happens, but I would’ve appreciated a more straightforward interface for handling the timelines, and easier means of accessing “bad” or alternate endings.

However, I was surprised with some of the changes made to the overall use of puzzle rooms. They mostly take place in the middle of the game, with other “problems” making up the finale bits. Spike Chunsoft seems to have hit the sweet spot in room difficulty as well; I was still busting out the pen-and-paper fairly often, but none of them reached the frustration of certain escape rooms from other games (looking at you, Food Pantry from VLR). Most of the escape rooms felt like a sufficient challenge, without massively impeding my progress, and there’s still many memorable puzzles, including one that might be my new favorite for the series.

This all culminates in a conclusion for the series, one that answers a lot of questions and, surprisingly, wraps things up fairly well. The danger of Radical-6, the identity of Zero, how exactly timeline SHIFTing works and the consequences of it — many questions finally get answered here, even ones you didn’t know you had, and it certainly got me unreasonably emotional multiple times, heightened even further by the excellent soundtrack. To say any more would delve into spoiler territory, so I’ll leave you with this: the story satisfies, to the level of Virtue’s Last Reward and even beyond.

Mild hitches and presentation issues aside, Zero Time Dilemma is a grand conclusion to a series that has always managed to catch me off-guard. I remember downloading 999 for the first time, having no idea what I was getting into; now, years later, it feels like a journey has concluded, and I feel remiss for any parallel history where I didn’t start down this path. Seeing off these wonderful, complicated characters, with their diatribes on theoretical math paradoxes and penchant for getting locked in rooms, has been something unique, and become one of my favorite series told in games. Zero Time Dilemma puts the right notes in the right places, and even when it stumbles, it’s still an intensely memorable and fulfilling conclusion to this strange, depressing, wonderful trilogy.

Zero Time Dilemma takes some bold strides to tell the series’ final chapters, but even when it falters, it's never slow to catch back up and deliver. Through well-designed escape rooms, brilliant writing and narrative decisions, and a more relatable cast than ever, Zero Time Dilemma puts the most deserving and exceptional final touches on this excellent trilogy.