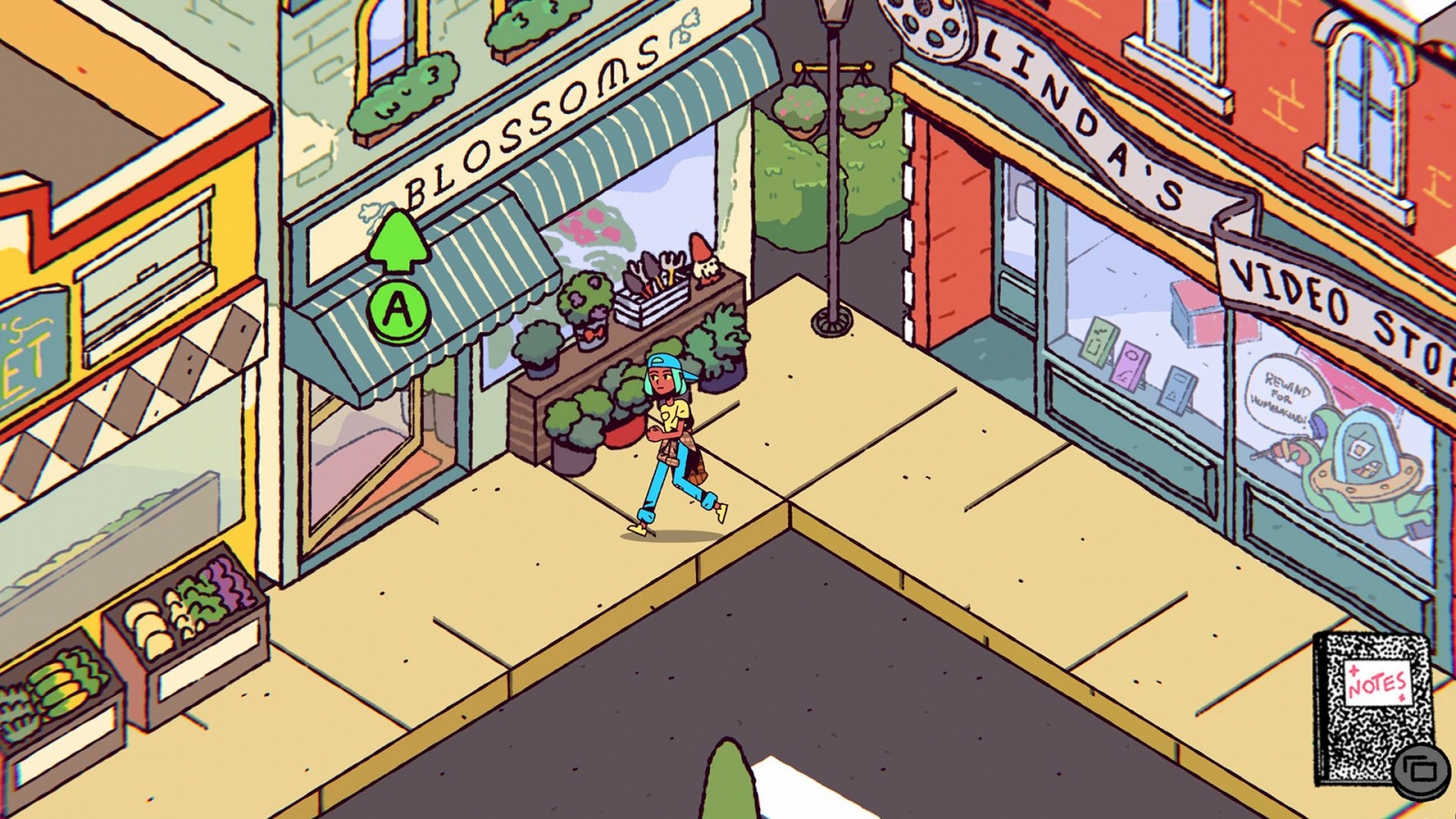 Slap bracelets, overalls, neon, Dawson’s Creek, Blockbuster video… all examples of a bygone era. The ‘90s are officially over twenty years old now, and as someone who was born right at the start (’89), it truly feels like a whisper in the wind. There haven’t been a ton of video games that have tried to capture the specific nostalgia of the day, with most focusing on the video games of that time rather than the surrounding culture. Luckily for us all, The Big Con has arrived to give us another taste of that rad decade we reminisce so much about.

So let’s start right at the beginning. Ali is a seventeen year old girl who really doesn’t want to go to band camp, and especially doesn’t want to go to college and become a professional trombonist. Her mom is really insistent on it, to the point she’s somewhat tuned Ali out, and Ali is unsurprisingly annoyed by it. Add in the fact that after her last shift, a couple of loan sharks came by, and she had to find out by eavesdropping that her mom owes them over ninety-seven THOUSAND dollars, and mom only has ten days to get that figured out. What to do, what to do? 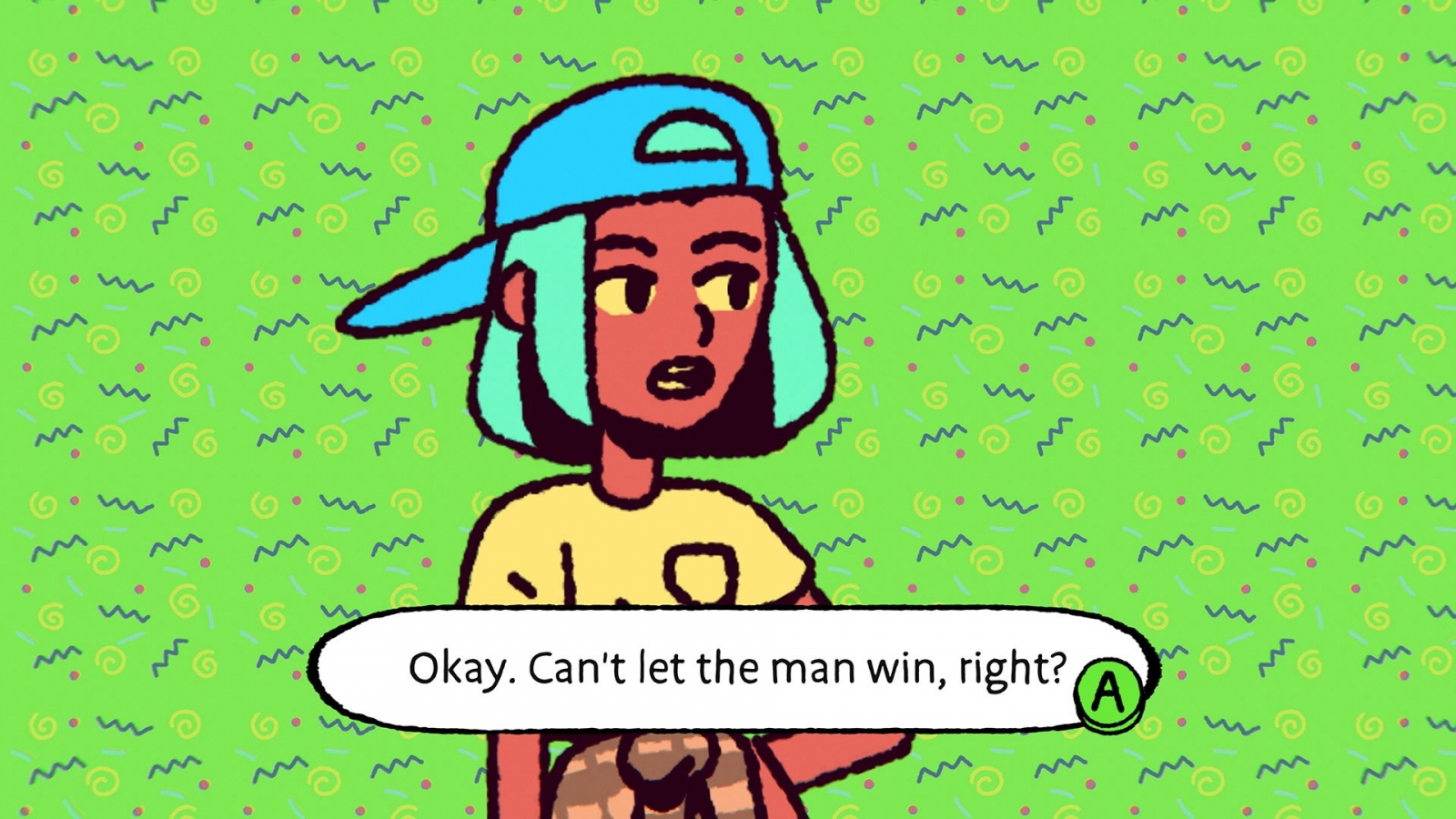 Well, Ali takes a moment to get some fresh air, and she meets someone outside of the closed ice cream shop who is selling ice cream. Definitely a bit of a weird coincidence, but he’s an eighteen year old guy named Ted. He has an idea for how you can make some quick money as well, which is stealing it and running a few small time cons. All of this is to work your way up to a big job, but he’s not ready to let you in on that yet. So all you have to do is prove yourself, and then head off with Ted instead of heading to band camp.

I don’t want to give away too much, but the story does manage to be charming if a bit shallow. It’s not as deep as a point and click adventure, even though it slightly resembles one. There isn’t any voice acting present, but Ali’s silly, sarcastic tone is captured well in the writing, along with the way the other characters are portrayed. Honestly, I love Ali in general as a character, and she works perfectly as the main protagonist. For the most part everyone has a wonderful whimsy to them, and it really matches with the aesthetic of the game. The main plot is honestly one that follows the usual tropes we’ve seen in plenty of movies, including a betrayal that you can see coming from a mile away. It’s still good, it just tends to be predictable.

I did really enjoy the small side stories, with some twists being unexpected, and others parts of your small cons. Given the direction of the game can sometimes hinge on what dialogue option you pick, it was nice to have those moments feel like they mattered rather than another tick on my percentage completed. Some may know by my other reviews- I’m a huge fan of puzzly style dialogue trees, and while this one as mentioned before doesn’t go as far as some adventure games or “P&C’s”, it does enough to draw me in. Whether it’s stealing a Burblo (a “furbie” for this world) to sell to a dad whose daughter is crying because the store is sold out, or trying to help lovestruck penpals find each other in Las Venganza (yeah, Vegas), it’s a blast solving these side quests. 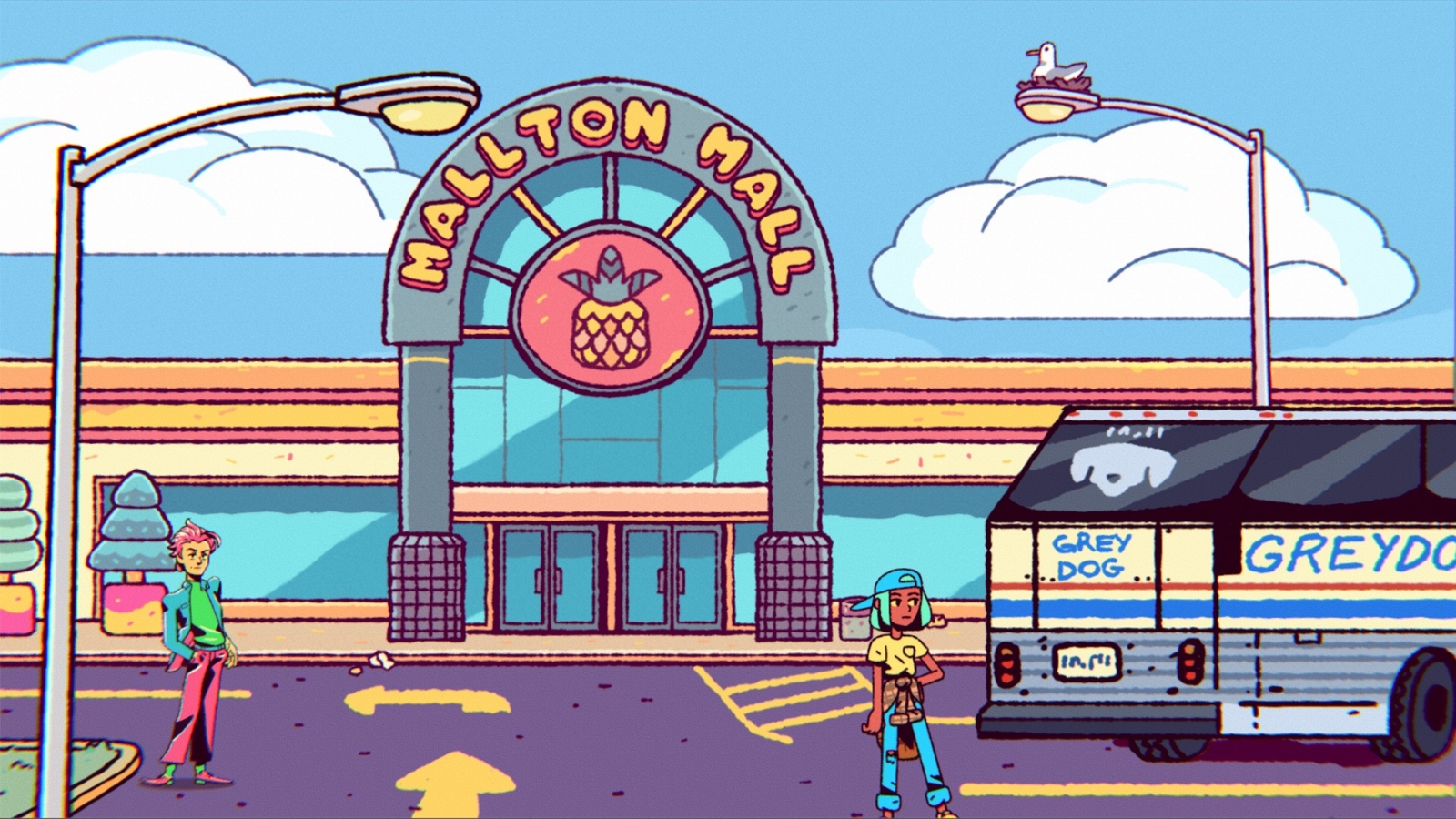 If the story has the same amount of charm as you may have had in Goosebumps books, then the charm the setting has could fill a Circuit City (Sadly, none exist in the game). All the places you walk around ooze that ‘90s glamour, especially the Mallton Mall, given malls were a big ‘90s thing. People are wearing everything you’d expect from that era, the colors pop in that vibrant ‘90s fashion, and Rad Ghost, the MTV themed figment of Ali’s imagination, is ripped from time itself. Everything he says is a nostalgia trip, and he’s a nice addition, especially with him being a hint apparatus.

Now, this is where the game can falter, in the gameplay itself. I like the overall package; a simple mini-game to pickpocket marks, talking with people, eavesdropping on them, and little cons you figure out as you go along, even if they aren’t that meaty as gameplay elements. But the guidance in how you’re doing things isn’t there. This is where the point and click adventure comparison rears its ugly head, with finishing up a specific thing and having nothing else to go on. Yes, there is a journal, but it’s not the easiest to navigate as well as find out what lead you should chase next. This isn’t a large game by any means either, but once you reach the final area it has some size to it, with unfortunately no map to assist you in getting around. I was often left running in circles to find my next target, or trying to remember where I’d seen a certain person last to bring them an item I had found along the way.

This especially annoyed me when I accidentally exited the mall area early, only to find I had moved into the next level. I feel like there should have been a prompt or something, but because I had collected enough money to move forward it just allowed it. Talk about disappointing, especially since I was still learning the game and was enthralled by that area. Similar things also happen in dialogue, where you’ll suddenly realize you’re in a puzzle with no way to pull out your journal to remember what information you need to tell the person you’re conversing with. It’s little things, but it can mean the difference between solving something or losing out on that storyline. 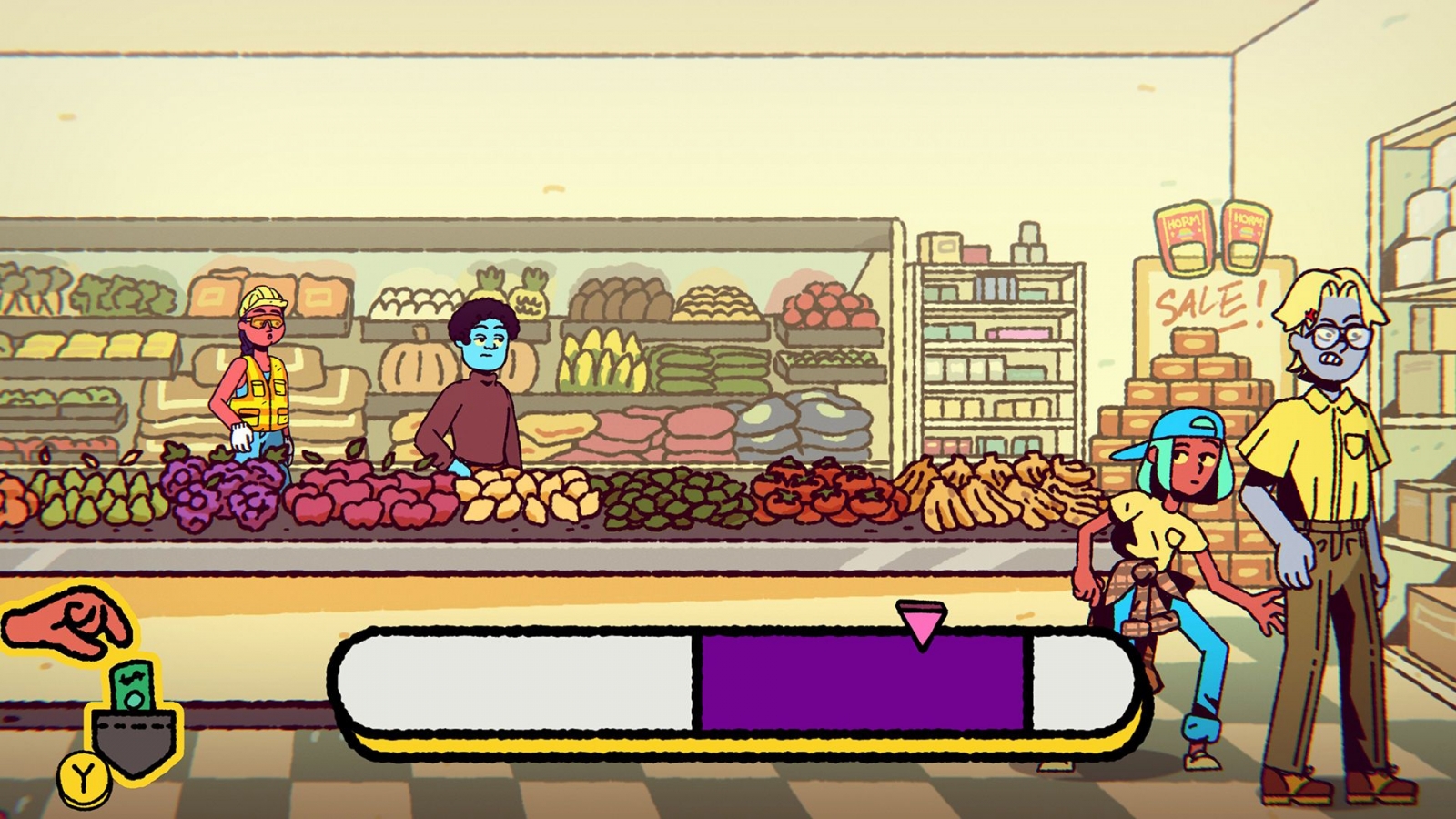 Once again, not everything is bad. The pickpocketing is an enjoyable aspect, if a bit one-dimensional, along with the stories and cons you chase in each area. The disguise thing is kind of fun as well, with needing to throw on some sunglasses or a mask or the suchlike in order to approach a mark again if you were caught before. It isn’t the most necessary thing to add, but it fits well, especially with the addendum that if you mess up three times you’re going to have to restart. Adding stakes to a game mechanic gives me a reason to try and play it correctly, so I like where Mighty Yell went with it.

While I think it’s worth the cost of entry at only fifteen bucks, some may not be happy with the length of The Big Con, which I managed to complete in about 4-5 hours. If I had to guess, this one can’t be much longer than 6-8 at best if you complete everything possible, and with its largely linear approach to getting the correct endings to your cons and stories there probably isn’t a lot of replayability here (not to mention I’m not even sure how given there’s no option on the menu screen to start fresh). That being said, I’ve played much worse for a lot more than $15, so I think it’s a fair price for something that’s fun to play.

The Big Con is a blast from the past in its setting and story. While the tools to get you where you need to go need a bit of work, Ali is an exceptional main character, and playing through her story is a lot of fun. It’s short, yes, but it’s definitely worth the price of admission for an entertaining jaunt through the ‘90s.

David Burdette is a gamer/writer/content creator from TN and Lead Editor for Gaming Trend. He loves Playstation, Star Wars, Marvel, and many other fandoms. He also plays way too much Call Of Duty. You can chat with him on Twitter @SplitEnd89.
Related Articles: The Big Con
Share
Tweet
Share
Submit