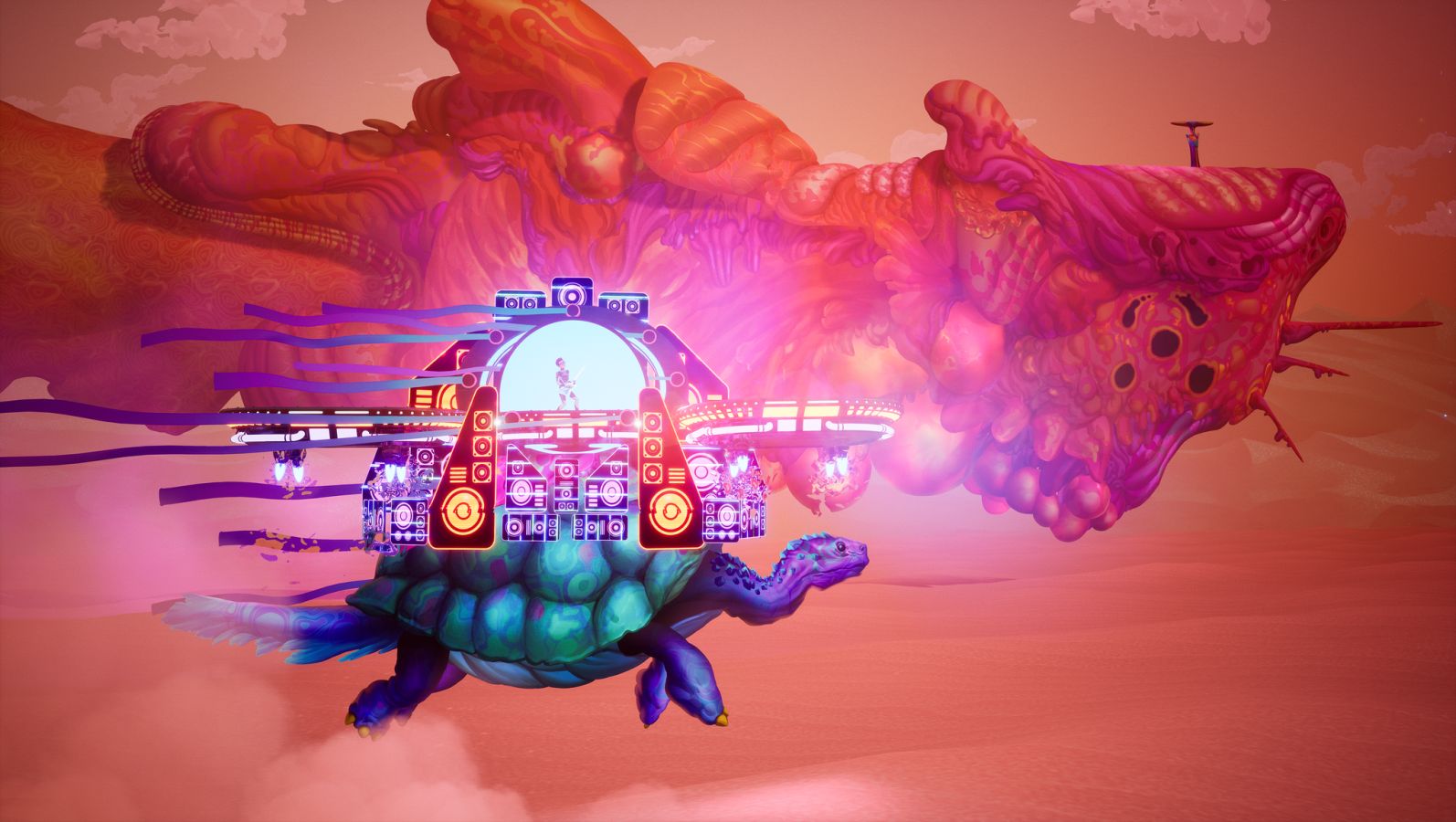 The Artful Escape is a truly beautiful video game, with one of the most unique art directions seen in gaming to this day. Each new location you visit on your journey through space in an effort to craft a rockstar persona pops with style and character. No location feels the same as any one you have visited before, yet each feels unified, like all the disparate planets you visit on your trip are part of the same crafted, curated world. Pinks, purples, bright blues, and deep greens dominate the color palette of this game rooted in glam rock and space opera. From the moment you step into space, outside your character’s hometown of Calypso, Colorado, you are visually bombarded as you make your way from set piece to set piece. Indoor locations are treated like dioramas, every place has the front wall peeled back so that you can look into the area and get a feel for the space as your character traverses whatever ship or celestial building he might be exploring. While this is not a unique choice for a 2-D platformer like this, the game does a good job of creating perceived depth where none really exists. The backgrounds always have a lot to look at and discover, even if you cannot directly interact with the things situated there. The art, from the character design to the animations to the environment, never gets old, and it always brings something new to the table. Along with the music, the visual aspects of the game are the best of what it has to offer. 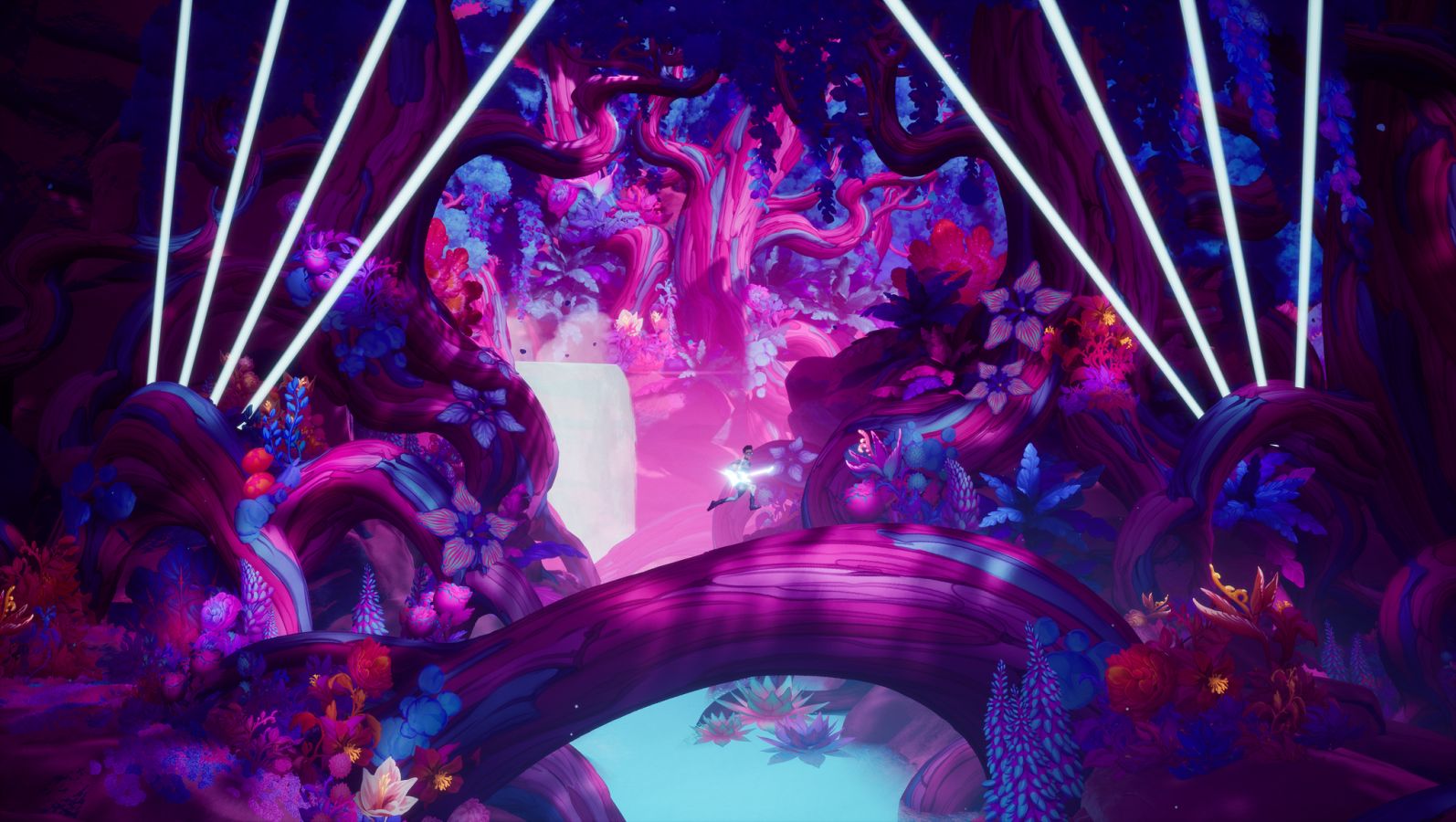 In a game that is largely about your character finding his sound and creating his own rockstar persona, it is important that the developers put care into making the sound – well – sound good, and they definitely achieve that. Each new destination has a track that dominates the score, and the player can augment that track by coming in with their electric guitar at whatever point they please simply by pressing a button. The track that plays in every level is generally orchestral in nature, so you might expect a clashing of sounds to occur, but that never really happens. Instead, no matter when you might start riffing on your guitar, it always seems to be the perfect moment to start shredding. The sound design and the visuals come together perfectly in the load screens between different levels where the player is assaulted with a fast-paced series of smash cuts reminiscent of experimental films or Darren Arronofsky’s Requiem for a Dream. I won’t say any more than that, but these smash cuts always got my attention and readied me for the next level.

The only problem that did occur, sound wise, was in some levels where the audio mix was slightly off. When I played the guitar in these levels, it was not audible as the score was already rising to a swell and was not mixed well to allow the electric guitar to shine just how I wanted it to. The other main aspect of the game’s sound is the voicework, which is absolutely incredible here. Each line spoken by the characters feels carefully crafted and delivered. Not to mention, the voice cast is stacked with heavy hitters straight from Hollywood, including Carl Weathers with a large part as well as Lena Headey, Jason Schwartzman, and Mark Strong all in smaller supporting parts. Every one of them sounds like they are having a blast with their roles and giving their all to breathe life into the different characters, and the material they get to work with is equally entertaining. 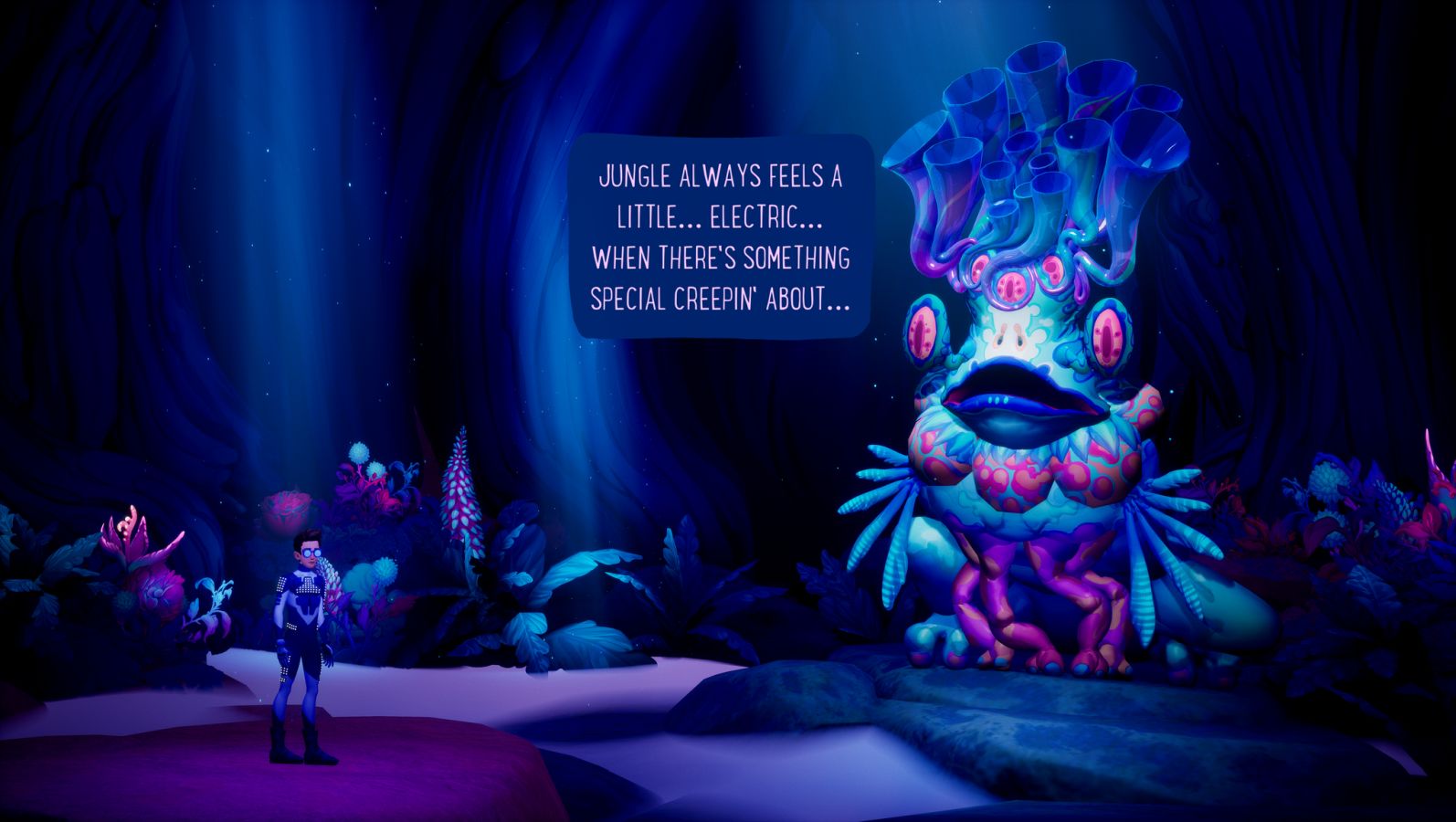 And that is how I would describe the writing on display in The Artful Escape; it is extremely entertaining. It is not necessarily deep nor does it offer some heretofore unheard of piece of wisdom, but it does tell a nice story with a good message with a fair bit of wit along the way. While the story beats never gripped me as much as another more narrative-focused game may have, I still felt myself wondering about how the ending would play out and whether my character would ever really embrace himself. There is a lot to like about the story and its themes of self-acceptance and realizing that you can make your own path, especially for modern audiences, however the story is really not the reason you should experience this game. The moment-to-moment dialogue, however, is top notch, and there are some side characters that really leave an impression even with the limited amount of screen time that they have. The dialogue is fast, quippy, and smart, bringing to mind the cadences of Wes Anderson’s or Edgar Wright’s characters. It even dips into absurdity at points, with some truly memorable character moments.

The Artful Escape’s worst aspect is its gameplay. The gameplay consists of the following loop: talk to people, go to a level, walk and sometimes jump through the level, do one or two miscellaneous things (conversing with characters, standing in a spot, giving yourself a makeover, etc.), wow the “boss” of the level with your incredible guitar skills, repeat. Now this would be fine if that loop was in any way engaging to the player, and, aside from the nuggets of dialogue that you get from time to time in between the major story beats, it is not. The platforming that takes up the bulk of each level is rudimentary. It involves you mostly jumping over small gaps, and sometimes double jumping and holding a glide like move to get past slightly larger gaps. Very rarely you will be asked to ground pound switches in the world that unlock paths forward, but that is as complex as this system gets. There are no secret pathways, no more complicated techniques to master, and no parts of the platforming that actually feel challenging or even engaging. 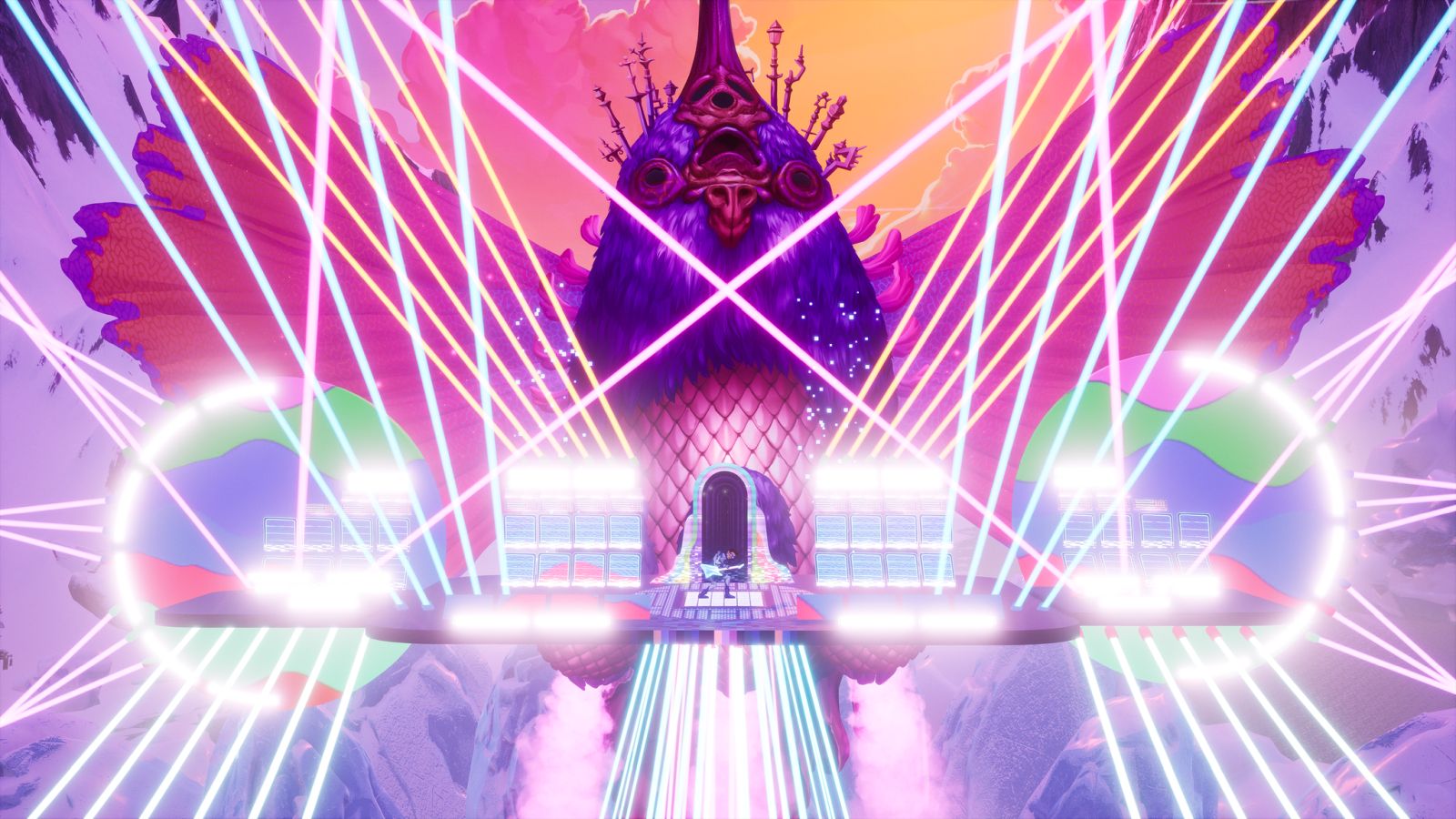 The “boss fights” in the game require you to play your guitar by pressing different buttons in the same sequence that the boss does. You essentially are just playing Simon Says, hitting the buttons that the boss telegraphs with nothing ever getting switched up even as you progress further into the game. This means all boss fights feel the same, save for their visuals and music, which was pretty disappointing. By the end of my play through, I was wondering when it would be over as a result of the tedium grinding away at me throughout my four and a half hour session with the game. The only other mechanic in the game is that you get to choose how your character speaks when he is asked certain questions, but this is never made more interesting than the surface level aesthetic choice that it is. Do you want to make your character a self-confident, almost mean pop star? Go ahead, but do not expect your character to act that way after he finishes uttering the line you give him. These dialogue choices do nothing to affect the end result nor even how people treat you in the moment, so they ring hollow.

The Artful Escape is not a bad game, but it certainly is not a game for me. I like a bit more agency in narrative-driven games than this one offers, but it is certainly a beautiful ride that it takes you on. Some may really enjoy the zen type gameplay this offers while they’re treated to a multitude of awesome locales and good music, but the gameplay is just too big of a burden for the sound and visuals to hold up.

The Artful Escape perfectly encapsulates the feeling of being transported away by a David Bowie track to a far-out world filled with colorful characters and wildlife and great music, but its gameplay falls flat, offering little depth past its first tutorial. While the game is short enough for its systems to never feel too egregious, it never reaches its full potential through its story or its mechanics. Fans of zen games, nice visuals, and quippy dialogue may want to pick this up, but do not expect a deep experience in playing The Artful Escape.

Noah Anzaldua is a game journalist, Twitch streamer, and a passionate fan of Apex Legends and Destiny 2. Writing and streaming are his passions, and he is carving a career path out for himself. He is a graduate of the University of Alabama where he is majored in News Media, History, and Political Science.
Related Articles: The Artful Escape
Share
Tweet
Share
Submit