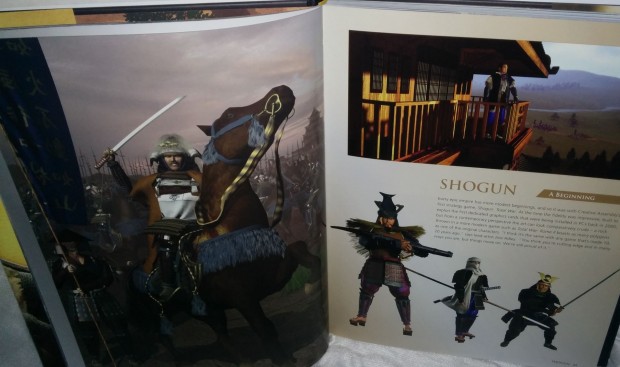 Total War Attila was just released (February 17th, 2015), but it is hardly Creative Assembly’s first march into battle.  The team has been honing their battlecraft since the first title’s release in June of 2000.  Shogun: Total War was a rousing success, leading the team to create ten more main titles and six expansion packs.   Their most recent effort was Rome II, and after the team ironed out the technical hitches with that release, it was far and away one of their very best.  Today we are taking a look at the long road from that initial game through the upcoming release of Attila and their most ambitious project yet, Total War: Arena.  Comprehensive and complete, welcome to The Art of Total War.

The humble beginnings of Shogun

The Total War franchise has been used a great deal by The History Channel to explain and demonstrate wars on several continents and across the ages.  While the show, Decisive Battles, has unfortunately ended, it is a testament not only to the staying power of the franchise, but also the amount of authenticity Creative Assembly has consistently built into each game.  That authenticity comes from a great deal of preparation and concept artwork.

The book kicks off with six gorgeous pieces of artwork that help set the tone for the titles they spawned.  Coupled with a forward from Lead Designer James Russell, Creative Director Mike Simpson provides a great deal of context and history for the Total War series.  Both provide a bit of a look into “how the sausage is made” before moving into the humble beginnings of Total War: Shogun.

Such a fantastic representation of Japanese art

Total War: Shogun is 15 years old, but the concept art doesn’t match the polygonal models that made up the in-game assets.  Pencil sketches and scenario panels give way to Shogun 2’s far more detailed approach to realism and more recognizable faces.  Jagged edges give way to smooth surfaces, and a vast improvement in the variety of character models shows Creative Assembly’s more refined second project.  The move to a Japanese wood block style immediately conveyed the feel of the time, even if it wasn’t always period accurate.  As the chapter continues, a great deal of detailed pieces show off the vast precision in every pencil-drawn sketch of the various pieces of architecture present in the iconic look. What caught me by surprise is that all of these sketches were made by the team, not copies from reference.  Naval craft and siege weapons get beautiful concept art to fully solidify the savage beauty of Shogun 2, as well as highly detailed maps and reference pieces.  Overall, the book spends nearly 50 pages on these first two titles — a great choice given the incredible beauty presented by the period.

The second section of the book focuses on Crusader: Total War — a game that was ultimately released as Medieval: Total War.  Set in the Dark Ages, Medieval and its sequel show the heavy religious influence of the time, but also focuses on the incredible elegance of the weapons and armor fielded in battle.  Little details like the proper underside-grip of a spear are correctly represented, as well as the correct side-strike method when used with a tower shield.  Holy wars and siege weaponry are featured prominently, as they did during this period.

Switching gears, the book moves into the Empire section with Empire: Total War.  As this title spelled an engine change for the series, the team at Creative Assembly was able to take their realism up a notch.  The bloody colonization of America, percussive naval battles, and sprawling cityscapes take the game from massive battlefields into the Age of Sail, as well as close-combat.  It isn’t iterative as much as transformative.  The team, as they were coming to grips with a new engine, describe it as “flying blind”, but it produced some of their best concept work.  Many of these pieces are true works of art.

Welcome to the War in America

Rome, the most recent setting (at least until Attila is released shortly), gets a rather large swath of the book, showcasing their most modern efforts.  This allowed them to bring some of history’s most recognizable locations and characters.  Cleopatra, Carthage, and the decadent downfall of Rome are shown with more detail than ever before.

The final, and ultimately shortest, sections of the book are devoted to the Attila expansion and Total War: Arena.   Arena represents Creative Assembly’s upcoming Free-to-Play 10 vs. 10 multiplayer-focused title currently in closed Alpha testing.  The art in these two sections are essentially photorealistic representations of the battlefields we’ll see in both of those games, as well as a few pencil sketch character variants and architectural examples.

The culmination of over a decade of work – Attila comes to power.

If there is one issue I’d point out with this book, it’s some of the pictures.  There are certainly larger pieces of art throughout, but there are a great many pages with scores of rather small versions of art that would have been fantastic to see in greater detail.  It’s a minor nitpick, honestly, speaking to a desire to see even more of Creative Assembly’s fantastic work than a fault with the product.  Still, selecting a few less of them and showing larger versions would have been better, in my opinion.

The Art of Total War

Overall, this is a must-have for any fan of the Total War series. It contains some incredible artwork, but it also showcases much of what the team felt about each game. It’s informative as well as visually appealing, and that’s always a great combination.

Ron Burke is the Editor in Chief for Gaming Trend. Currently living in Fort Worth, Texas, Ron is an old-school gamer who enjoys CRPGs, action/adventure, platformers, music games, and has recently gotten into tabletop gaming. Ron is also a fourth degree black belt, with a Master's rank in Matsumura Seito Shōrin-ryū, Moo Duk Kwan Tang Soo Do, Universal Tang Soo Do Alliance, and International Tang Soo Do Federation. He also holds ranks in several other styles in his search to be a well-rounded fighter. Ron has been married to Gaming Trend Editor, Laura Burke, for 21 years. They have three dogs - Pazuzu (Irish Terrier), Atë, and Calliope (both Australian Kelpie/Pit Bull mixes).
Related Articles: The Art of Total War
Share
Tweet
Share
Submit