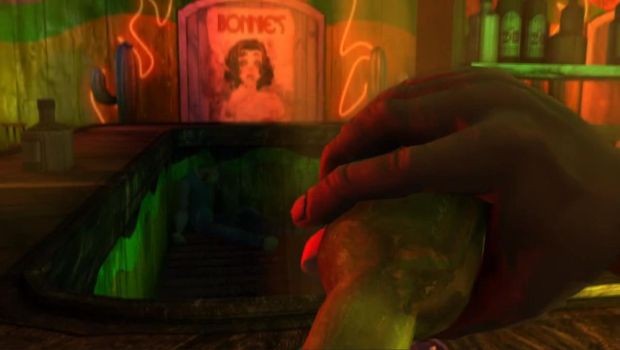 As some might expect, there is a polarizing shift between playing games for fun and playing games because it’s your job. There are several times and numerous examples when my time at Gaming Trend has reminded me of this, but few stand out as vividly and sourly as Zombeer.

You take control of ‘K’, a college student in the midst of what I’m sure someone imagined was a hilarious and gag-filled zombie apocalypse. After waking up in a bar, K receives a voice message from his girlfriend, Karen, revealing she’s been bitten by the zombified villain, Chancellor Colon Duty, and sort of needs your help. (But not as much as a new skirt to replace the one ruined in the attack.) In a round of dialogue that sounds out of love, but in a tone that stinks of spite, the already infected K sets off on his mission to save Karen and get revenge.

Prepare to see this a lot…

Conceptually speaking, this title actually has a pretty solid premise. Just going with the idea that the zombie infection which has gripped everyone around you is an understood and treatable phenomenon, K subdues the effects of his impending ghoulhood by drinking bottle after bottle of Zombeer (pronounced Zom-beer, for those of you who were saying zom-bur or zoom-eer at first glance), a miracle booze that inexplicably treats undead symptoms. As you progress through the game, you must continue to drink to maintain your humanity. Drink too much, and you will become drunk and your controls will suffer. Drink too little and you will start to become a zombie, where you also lose control, but in a slightly different way. This basically makes the relatively short game a massive speed run, which when combined with its other elements, should be pretty fun time.

But, as it turns out, this is where Zombeer drastically falls apart.

I will hand it to you Zombeer. Before now, this was not a combination of images I’d ever thought I’d see.

Zombeer goes to great lengths to let you know that it doesn’t want you to take it seriously. Nothing is explained and very little is developed. Around every corner or at the end of each hallway, there is either a silly sign, random cultural reference, or a burst of K’s contextual banter telling you Zombeer is just for laughs. And there is something to be commended in that, seriously. But, Zombeer takes this mission statement too far, and in the process doesn’t bother to create a very enjoyable game.

The controls are functional, but stiff as a gearbox set in concrete, making everything from combat to exploration a grueling chore. The only times the corridors you are wandering through aren’t entirely linear is when you are backtracking after hitting a dead end, thusly beginning one of the many tedious searches for a path to the next section. The zombies you are facing boast animation quality so rigid it’s creepy in a very unintentional way, and while you’ll encounter several variants throughout your journey to change things up they’re rarely dynamic enough to affect your tactics. There really isn’t anything to do here that you haven’t done before, better, in countless other first-person presentations. And since Zombeer relies so heavily on it’s referential humor, often regarding other games, it’s constantly reminding you of that and shattering any hope of immersion.

As the South Park creators would tell you, good satire is found in its nuance. Chancellor Colin Duty is not an example of this…

Still, even if the world that Zombeer presents to you is appealing, the method of interacting with that world is a passionless afterthought. Even as K readied the wobbling, pink dildo that would play the part of his starting weapon, I knew that what I was about to spend the next few hours of my life with was not something designed for the masses, or even a select demographic of toilet humor aficionados. This game, at best, was designed for a frat house living room full of friends, attempting to breath larger life into a whoopee cushion of inside jokes.

Oh Jessica, why don’t I care about you?

With effort, you can ring some positives out of this title. The game does manage to squeeze in a lot of Easter eggs in the form of both pop’ and geek culture, ranging from Jigsaw’s mask from the Saw flick to a wall mounted Flux Capacitor. Sometimes trying to see what iconic 80’s toy or movie monster is going to make a cameo next will be all that gets you to the next room, and if you haven’t completely checked out by that point, every one in three jokes K makes to himself will at least get a chuckle out of you.

But more than anything else, I spent most of my time with Zombeer unmotivated to the point of confusion, repeatedly psyching myself out into believing I missed something and running around in circles. That can’t be all there is, right? I would find myself thinking, only to discover that was exactly the case. To the title’s credit, it would try to give me some direction in the form of on-screen pop-ups, but these were often vague or with the assumption I was already familiar with the rat maze I was trapped within. The bland visuals, which smear into an endless canal of glowing greens, blues and pinks, and distractingly silent atmosphere, made it difficult telling the difference between an interactive surface or another, painted-on, faux exit.

You know, sometimes I wonder why they even bother putting in a door if it’s- Wait, what? The chicks? But they’re all corpsified and gross!

One section of the game so profoundly marred my experience, I honestly didn’t care about anything beyond it.

After wandering to an elevator I pressed the keypad, causing the doors to groan open and reveal it’s shuddering, burning interior. K, to my surprise, then moved into an animated sequence, making his way through the devastated contraption and toward the opposite set of open doors. Then, an icon flashed on my screen touting “Joystick Button”, something I had learned at this point meant “B’ or “Interact”. I hit the key as prompted, blocking a falling ceiling grate with K’s arm.

“Joystick Button” equals “B”, got it! Alright maybe I-

“Oh, a quick time event!” I thought, troubled by how refreshing it was. But then, almost as if to punish me for having a moment of excitement, another prompt appeared, which was entirely unintelligible.

Wait, what the hell?

Out of instinct I pressed the “Joystick Button” a second time, and was greeted to the sound of K’s screaming death. I shrugged it off; after all, there were plenty of other buttons to try, especially on a PC game. But after nearly 40 minutes of K’s death cries and having pressed, slammed, jabbed, and punched every input combination I could think of, I honestly forgot what happened when I appeared on the other side.

Was this a glitch? And if so, was it the glitch that held me back or had come to my salvation? In either case, I knew one thing for certain: I hadn’t had enough fun to ever want to do it again.

As I wandered further though the game, I couldn’t shake the feeling I had gotten from that time with the Elevator of Death. There was a sniping section that wasn’t terrible, and a quick balance-beam mini-game, but I really didn’t care. My interest had died inside that dangling, virtual box. And a couple hours later, the title was over for real.

Zombeer bombards you with so many references, so quickly, the value of any of them is lost in their own wake. It’s literally like taking a bucket of Easter eggs, painting them colorfully, and then dumping them in the middle of the lawn.

Plenty of titles have moments that gamers feel are broken or glitched, but in reality are just challenges we have yet to adapt too. Eventually, we overcome these obstacles, and to the developer’s credit we feel that familiar rush of virtual evolution. But, that fine line between Ninja Gaiden reflexes and Demon’s Souls endurance is a razors edge tempered by the fires of a player’s enjoyment. There is something about it, an X-factor, that makes the frustration fun. Indie title or not, Zombeer just doesn’t achieve this, and even though there are things about this title some may find redeeming, on the whole, there just weren’t enough for me.

Zombeer is, in all honestly, a cute idea stiffly marinated in Leisure Suit Larry sensibilities, Duke Nukem- like execution, and Stubs the Zombie inspirations. However, this title succeeds almost only in resurrecting those title's shortcomings while piling on some of its own. Stale at best and tedious at worst, Zombeer consistently feels like the guy who comes late to the party and spends the whole evening laughing at his own jokes. With its atrophied mechanics and lame narrative, you will need a beer of your own to wash away the memories of this rotted corpse.

I've been a huge fan and critic of games and movies ever since I had a voice to speak about them. I love power and influence of great storytelling, interactive and otherwise, and now want to be more than just a consumer. My biggest strength in this regard? Almost every time, I'm fair all the time.
Related Articles: Zombeer
Share
Tweet
Share
Submit