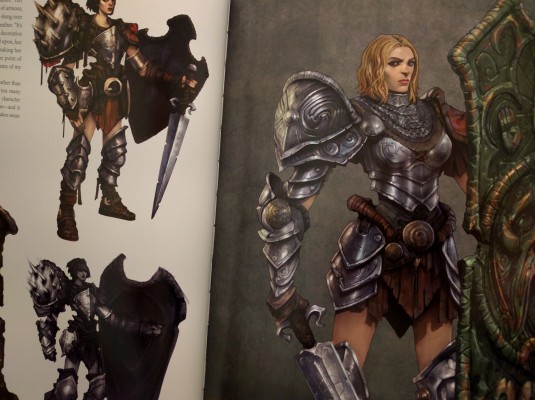 It’s hard to believe that we’ve been playing Fable since 2004. Sure, they might not always meet the outlandish and occasionally unrealistic goals that Peter Molyneux set, but there’s simply nothing else like them. It’s been over five years since our last visit to Albion, but the team at Lionhead are taking the franchise in an entirely new direction. Absent Peter, it will be interesting to see how a cooperative free-to-play Fable experience might come to life when it’s released in 2016.

To understand Fable Legends, and to get the context for this review of The Art of Fable Legends, you have to understand the fairly significant change to the tried and true Fable formula. Most prominently, the game is based around four heroes and a villain. Players can experience the game solo, filling in the remainder of the slots with AI-controlled sidekicks or enemies, or each slot can be filled by friends. The heroes of Albion must use their unique skills to team up and defeat the player tackling the villain role and the army of creatures that person controls. Surprisingly, the gameplay is accessible cross-platform, allowing a mixture of Windows 10 and Xbox One players, allowing players to switch back and forth at will.

Options or iterations, these are your characters to make.

As Fable Legends embraces the free-to-play model, they are giving a nod to several games in the MOBA space, offering up a few heroes on a rotation for players to select permanently with an unlock via in-game currency or real-world money. It’s with all of the above said that it’s no surprise that the first 97 pages of The Art of Fable Legends are devoted to heroes.

We’ve not seen a final count (and I believe that all of the examples in this art book are just the tip of the iceberg) of the number of heroes in Fable Legends, but the 14 depicted in the book provide a great assortment of character types that players might be able to choose and customize. In true Fable fashion, you’ll be able to adjust a great many aspects of your character, from their clothing and emotes to their weapons and skills. It seems publisher Titan Books worked hard with the Lionhead team to represent all those pieces well in The Art of Fable Legends.

I always enjoy the pencil-sketch looks at how art evolves.

The team at Lionhead put a lot of work into each piece of art here, but the insights including alongside them are equally interesting. They tell stories of how specific pieces came together, thoughts that guided their work, and overarching style and design choices that would eventually inform on every aspect of the game. These insights are a real highlight, and I greatly appreciated their inclusion.

Moving into the next section of the book, we see the monsters that villain players will control. One of my favorite pieces is the section on the scrawny-but-deadly Redcaps. Replacing the usual Hobbes we’ve killed by the score, the Redcaps are odd, little creatures, nailing their hats on with a nail for each hero they’ve killed. We’ll have to see how they play out in gameplay, but they look scary in profile and frankly goofy facing forward, as their eyes are big as their snarly overbites. Some of the iterative bits showcase a far more comical look (and one of them looking completely derpy) than the final form. Hopefully we’ll get a chance to see some of the goofy ones as well.

Every time I see a Red Cap, I’m gonna think of this picture and laugh.

Beyond the Ogres and Balvarines lie the Pucks. Pucks remind me of Pan from Guillermo del Toro’s incredible Pan’s Labyrinth. Loosely based on the Green Man legends from Europe, these creatures are mischievous, treating humans as toys and playthings to be broken. We saw the Rosewights in the E3 trailer for Fable Legends, and here they are depicted in various forms. Ranging from disembodied trees with clawed limbs, to large bush-creatures with a face resembling a medieval doctor’s mask; The Rosewights look like they’ll be one of the larger creatures we might face in Albion.

Representing the darker tone the team is taking with Fable Legends, we also get a good look at the Lady of Rosewood. Tired of people stealing her roses, she sets out to stop them. Her blood spilt in the forest, she becomes a part of that forest — a vengeful spirit. The artwork here is intricate, giving a near sugar skull level of detail in for her facial features, with the final white-eyed form being somewhat less delicate and more terrifying. Whether or not we’ll get to see it in-game, the team also provided a full backstory for the Lady of Rosewood, showing us her human-maiden form, and several possible looks for her.

The Lady of Rosewood is a very detailed haunt.

While there is a hunched masked and hooded beast to represent the Villain that one player can play, this Art of Fable Legends book reveals that we won’t actually see this creature. In fact, the player won’t have an avatar per se, instead adopting a sort of unseen Dungeon Master sort of role to command the denizens of Albion.

One of the things I look for in a good art book is a solid mixture of artistic representations. The Art of Fable Legends has a great cross-section of pencil sketches, 3D renders, and inked digital pieces. The characters the player might select have all three for each of them, clearly showcasing how much of a focus there is on style and cosmetic choices.

It’s amazing how detailed the 3D renders are in The Art of Fable Legends.

A large portion of the latter section of The Art of Fable Legends is devoted to the locations we’ll explore, including the various shops we might frequent. It’s still unknown whether or not we’ll be able to build or own shops like in previous iterations, but it’s clear that the team put a lot of thought into the architecture of these places, right down to the signs that swing out front.

One of final sections of the book is a familiar face, literally. Demon Doors are the often-mischievous riddlers in previous iterations of Fable, and that looks like it’ll continue with Fable Legends. Behind them lies great treasures, but this time around the Demon Doors will be providing narration as much as puzzles.

The Art of Fable Legends

From the foreword by Art Director Kelvin Tuite to the afterword by David Eckelberry, and the warm acknowledgements that follow, it’s very clear that this game is a labor of love. It’s a drastic change from its predecessors, but The Art of Fable Legends shows a great mixture of solid tradition mixed with a whole new experience. If you are a fan of Fable, and you are excited about this new chapter, you’d be hard pressed for a more thorough look at the new Albion.

Ron Burke is the Editor in Chief for Gaming Trend. Currently living in Fort Worth, Texas, Ron is an old-school gamer who enjoys CRPGs, action/adventure, platformers, music games, and has recently gotten into tabletop gaming. Ron is also a fourth degree black belt, with a Master's rank in Matsumura Seito Shōrin-ryū, Moo Duk Kwan Tang Soo Do, Universal Tang Soo Do Alliance, and International Tang Soo Do Federation. He also holds ranks in several other styles in his search to be a well-rounded fighter. Ron has been married to Gaming Trend Editor, Laura Burke, for 21 years. They have three dogs - Pazuzu (Irish Terrier), Atë, and Calliope (both Australian Kelpie/Pit Bull mixes).
Related Articles: The Art of Fable Legends
Share
Tweet
Share
Submit