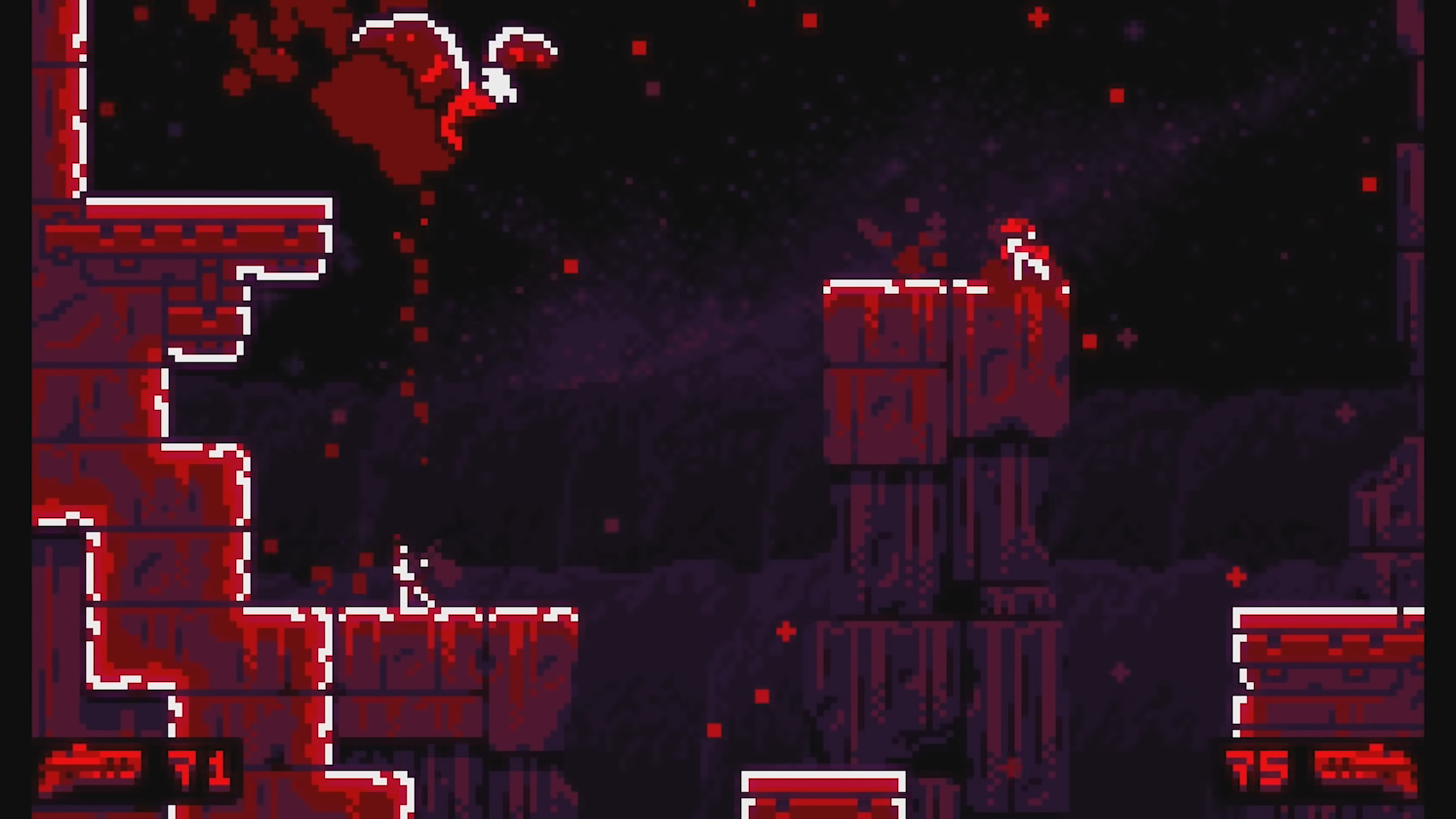 Overwhelm will test you. It will test your skill, your reflexes, and a little too often it will test your patience. This miniature action-horror platformer flips the some of the conventions of the Metroidvania genre to create a mounting sense of dread, pushing you further and further out of your comfort zone, as the landscape and its inhabitants become ever more hostile and alien. Overwhelm pits you, a single spacefarer, against a hive of alien beings which live in a cave system on a far-off planet. Your goal is to traverse this network of rooms and kill five bosses. The twist comes in what happens after each victory: upon defeat, each boss grants a special ability to every other enemy in the game, making them stronger the more you succeed. What starts out as a difficult game becomes a nightmare as you descend, creating an experience that is consistently tense while not being so consistently fair. Abram and I took a look at the game and came to grips with its many strengths and few but palpable weaknesses.

The basic moveset is tight and extremely efficient. You can move, jump (with a minor wall-jump available to help you navigate), and shoot a weapon you aim with the right control stick. You also have a punch ability, which carries some momentum with it; this carries some risk, as it will bring you closer to your foes, but can also help you make some quick adjustments in air. Your weapon has limited ammunition that only gets refilled before boss battles, so you will want to use the punch on smaller creeps or skirt around them entirely. Movement is fast and precise, which makes it easy to master. As the game progresses, you will need every one of its intricacies to succeed. 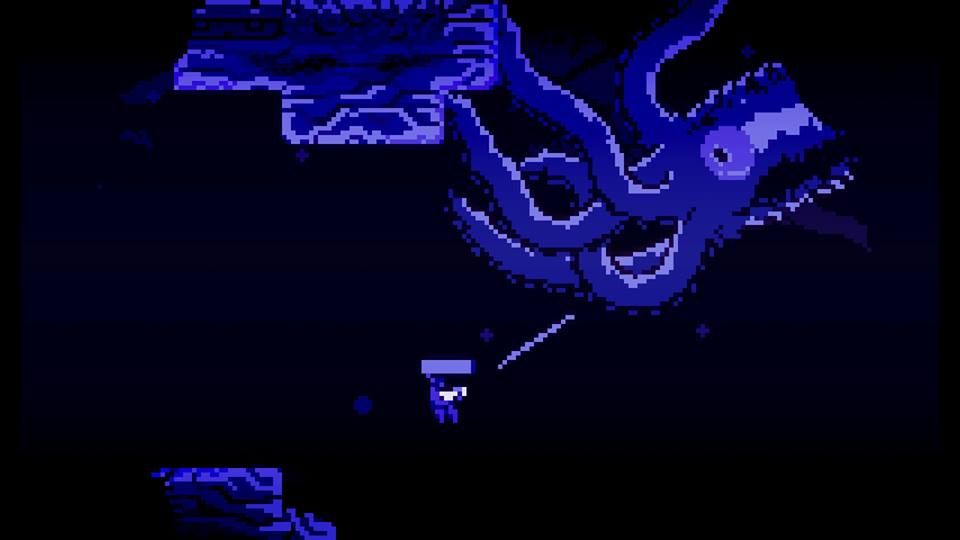 The strategy is not only in defeating enemies, but learning how the map and bosses feed into one another. Certain sections of the map have large open spaces, which leave you safe from above…unless you have defeated the boss which grants its allies the flight ability. The map is hostile as well, being comprised of a set of large, somewhat interconnected zones that slowly fill with enemies. Navigation is a key skill to survival, especially as the hive becomes more lethal. However, there are points where the map’s size becomes less an asset to Overwhelm’s horror theme and more a morass you have to slog through. These areas are large, and traversing them involves some backtracking, so you find yourself not feeling so much threatened as annoyed. These moments aren’t too common, and they become less so as the game progresses, but they are a consistently frustrating part of the experience.

The boss battles are hectic, multiphase fights, as bosses push you to master the best tactics against their singular abilities before passing them on to the rest of the hive. Unfortunately, they also go on far too long. Your weapon, which dispatches other enemies almost instantly, feels like a slingshot against the main bosses. You will find yourself hammering away at them for minutes at a time, having learned their movesets cold and just…waiting to see when your mastery will actually matter. There is a distinct point in every fight where you know what to do and the rest of the battle is purely a matter of playing it out until the end.

Not to say that Overwhelm isn’t difficult. Even removing the maximum number of handicaps, you are as fragile as the housing market in 2008. Every will kill you instantly, and you only have three lives. For a game with challenging fights and evolving enemies, this means beating your head against a wall for hours on end if you want to improve. Just learning the map is a challenge, and on the base difficulty most gamers simply will not be able to complete this game. I’m fine with difficulty and having to learn a game’s intricacies, but this seems like a blunt way to pad the game’s length, and its difficulty doesn’t feel perfectly balanced your low lifecount. Even worse is how often these deaths come not to lack of skill, but the claustrophobic camera. It focuses close on your character, making it difficult to see incoming threats until they are already in your face. The common enemies tend to zoom in out of nowhere, while the bosses often teleport, leaving you no idea of where they are or where is safe. Past a certain point, the difficulty is less satisfying than frustrating, but luckily there are a lot of options to help. 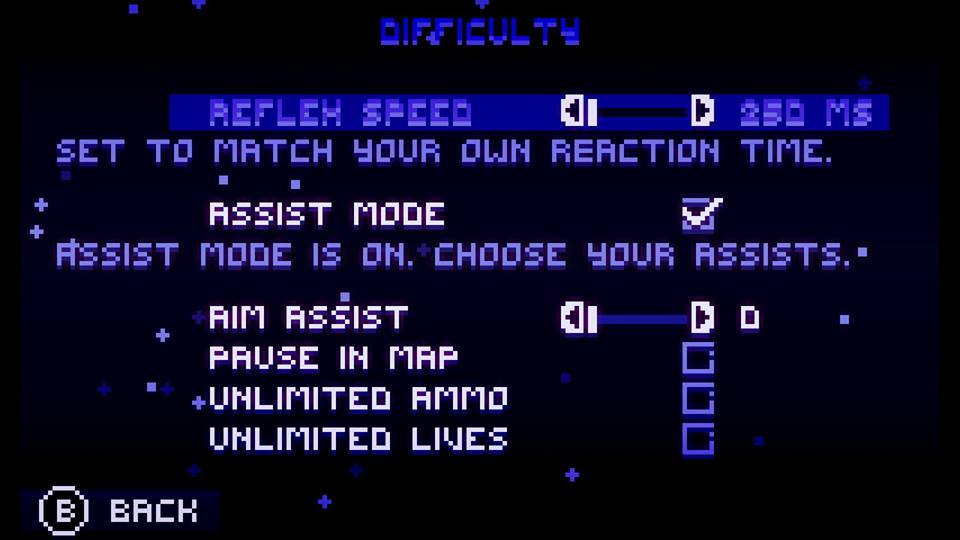 If you want, you can give yourself infinite lives, infinite ammo, the ability to pause while you are looking at the map, and aim assist. Of course, you can also play Overwhelm via local co-op, which adds to your damage output and threat coverage, as well as the fun depending on your partner. Infinite lives is almost more useful for learning the map than the boss fights, but the extra edge is a major boost for those who want it. It will still be a long time before you can jump to the game’s base settings, but even with these assists, Overwhelm is a ton of fun.

The visuals and sound help enforce a feeling of hostility and dread. With cool red (or another color, if you want to shift it) and white against stark black. There is little detail, but designs are clean and precise. The moody alien soundtrack only comes into play during boss battles, at other times the dread-filled silence is punctuated by your own movements and your enemies’ attacks. Much like 2015’s Downwell, this retro-style minimalism lends a ton of atmosphere to the game’s aesthetic.

Overwhelm features a New Game Plus mode, which rearranges the placement of enemies and mirrors the game’s map. The varying levels of difficulty and new game plus add in some replay value, but that doesn’t change the fact that Overwhelm remains a short experience. A full run, depending on number of deaths, should take you around half an hour. That half hour will be a tense struggle for survival, despite a few moments of frustration that may come along for the ride. 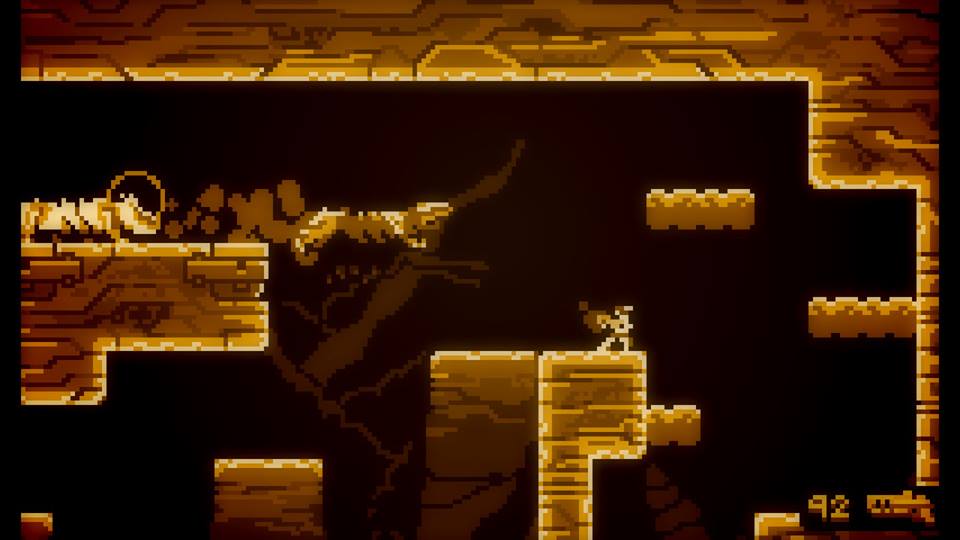 Second Opinion–Abram Buehner
Overwhelm is a digital firecracker. From the first moment I booted up Ruari O’Sullivan’s Overwhelm, I was immediately and intrinsically connected to the game’s stark, frenetic action. Essentially, Overwhelm is a bite-sized, action-platformer that is equal parts Metroid and DOOM, and the game wears its influences boldly on its sleeve. In fact, DOOM feels less like an influence and more like a template, as Overwhelm feels, in many ways, like a 2D-iteration of id Software’s high-octane shooter. Considering my taste in games, this is far from a negative. Overwhelm, to me, felt like a hit of pure adrenaline for the roughly hour it lasted, even with its obvious camera issues that drag the game down.

The game just feels so right to play–after reworking certain aspects of the experience, that is. Luckily, Overwhelm is an incredibly flexible game and I took advantage of this immediately. My controls were rebound and I enabled infinite lives just minutes into my time with the game. The former is just about the given, and the latter I feel, makes the game’s challenge feel a lot more organic. While Overwhelm is an inherently challenging game, its difficulty is artificially worsened by its claustrophobic camera that often leads to enemies attacking you from off-screen, thusly truncating your reaction-time to the point in which the game just feels unfair–especially because your Knight dies in one hit. For me, this decimated Overwhelm’s pace and made it unnecessarily frustrating to learn and improve a particular area or boss, because three deaths sent me back to the starting chamber.

In many respects, this issue of difficulty reminded me of my time with Wolfenstein II: The New Colossus. Much like that game, Overwhelm’s difficulty leans far more in the direction of punishing than challenging. At the normal difficulty for both, the games certainly can be beaten, but they require decidedly mundane and defensive playstyles to surmount their challenge. When I’m playing an action game, I want to be able to play with bombast not caution, especially in a title like Overwhelm which clearly has such raw energy.

As such, enabling assist mode accomplished two things. First, it offered me a fairer challenge. More importantly, however, it gave me the room to take risks and play aggressively. Just like how a lowered difficulty in Wolfenstein II allowed me to leave the sanctity of cover to Schockhammer and stab my way through the Reich, opting to turn on infinite lives allowed me to rip through Overwhelm with manic speed and energy. This room for risk and dynamic combat coupled with the game’s incredibly fluid control let me really vibe with Overwhelm.

I fell into a sort of trance, barrelling through areas, leaving a trail of carnage in my wake. I almost never stopped moving, relying on a frantic chain of jumps, punches, and gunshots to reach the game’s (admittedly underwhelming) crescendo. I still found myself dying repeatedly to several tenacious boss encounters that slowed me down, but I was able to learn and adapt to the opposition after a few attempts. Overwhelm’s gameplay mechanics are just so precise and snappy that, in conjunction with the game’s tight enemy design, these white-knuckle boss fights were nothing short of memorable. Unfortunately, this mechanical success made the technical failures of the game all the more frustrating to me. 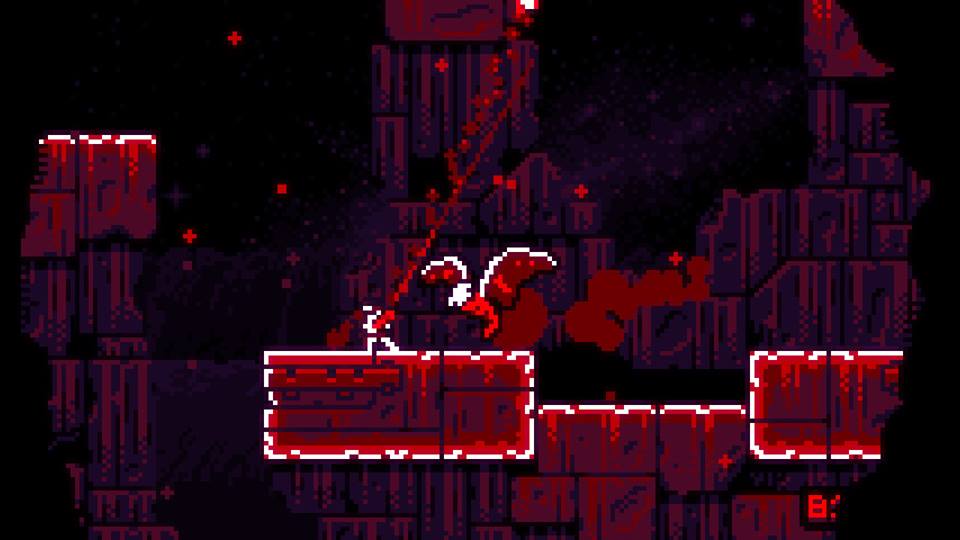 Even with assist mode on, these aforementioned surprise deaths randomly broke the game flow. I was able to get back into the groove after just a few moments because of how snappy things in Overwhelm are, but these little blips add up to a larger issue. Iin an experience that so heavily depends on a raucous pace for gameplay satisfaction, it is seriously grating to be constantly buffeted by out-of-sight enemies. I feel like a badass when things are going smoothly, but as soon as I get interrupted, my focus and connection to the game is broken. It’s the equivalent of trying to watch John Wick, but after every few kills the movie has to buffer for a second. The underlying experience is still there, but it is choppy to the point of annoyance.

On the whole, I enjoyed my time with Overwhelm, but that enjoyment certainly bears a caveat. As a lean, frenetic gameplay experience, there is a raw, intrinsic satisfaction to Overwhelm. But, I found this severely undercut by the game’s unfair difficulty due to its camera. Even though I was able to make the game feel decidedly more fair by enabling infinite lives, I still had to contend with these frustrating, surprise deaths–just with a lesser punishment than intended. It certainly dampened my experience, but not to the extent where I wouldn’t recommend Overwhelm. For gameplay purists, there is a fun evening of twitch 2D-combat here, even with its clear design issues.

Overwhelm’s dark, intense action makes for a fantastic yet occasionally frustrating horror experience. When you are in the game, leaping around enemies and using your limited ammo to deal with evolving threats, you will be experiencing an immensely satisfying challenge. It’s only a shame that some of the technical aspects can make death too easy and navigation a chore, because the roots of Overwhelm’s concept design are exemplary.

John Farrell is a legal aid attorney specializing in domestic violence, living in West Chester Pennsylvania. You can listen to him travel the weird west as Carrie A. Nation in the Joker's Wild podcast at: https://jokerswildpodcast.weebly.com/
Related Articles: OVERWHELM
Share
Tweet
Share
Submit