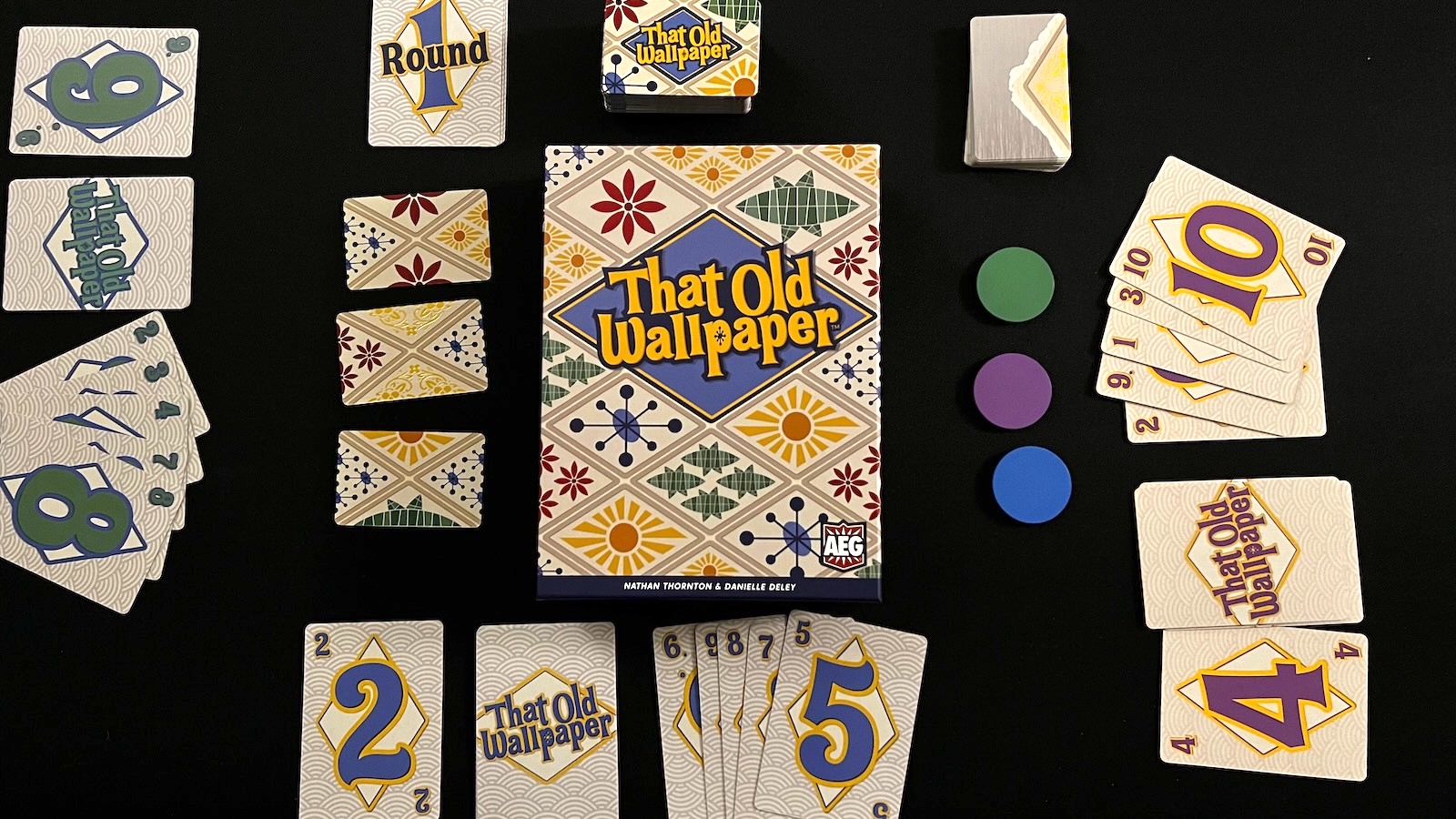 We’ve all been there. You walk into a room, take in the decor, the paint colors, the knick knacks on the sideboard, and immediately wonder whether you stepped straight into another decade. That Old Wallpaper takes the aesthetic of your grandmother’s dated, mid-century home decorating style and brings it to the table in a somewhat lackluster card drafting and matching game.

That Old Wallpaper is a game from AEG games for 2-4 players that involves re-wallpapering a surface with a variety of crazy patterns. Over the course of three rounds, players will bid on action positions, draft wallpaper tiles, and build a tableau of matching sides and patterns. Players will then score matching patterns and symbols to determine the overall winner. 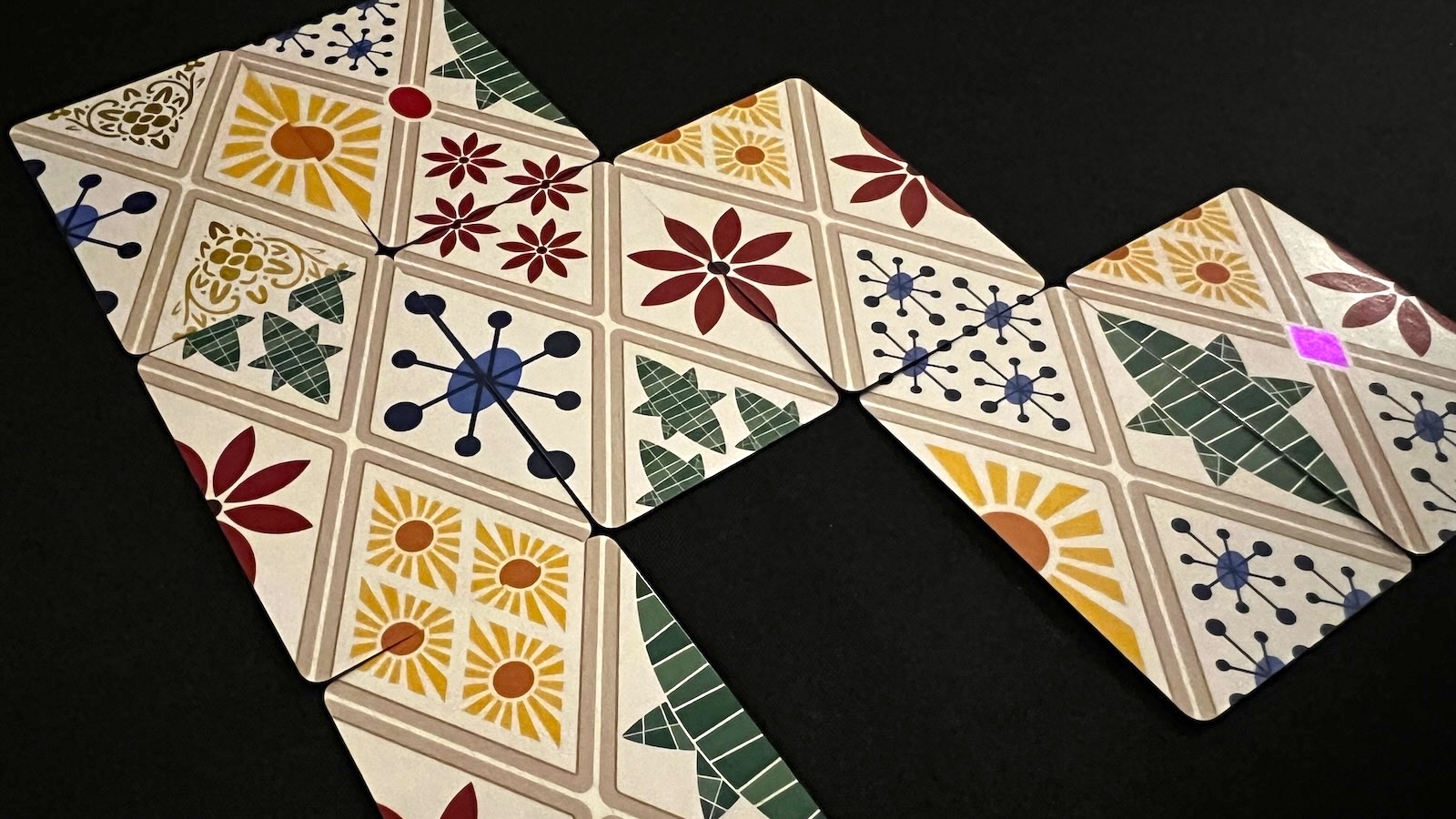 Each player in the game is given a deck of cards and a matching colored token. Players  shuffle the deck and take 5 cards each. These cards are used to bid on the wallpaper tiles displayed in the center of the table. Each turn, three tiles are placed out, with extra tiles placed when certain conditions arise. Players then take a card from their hand and place it face down on the table. When players reveal their cards, they will take a tile corresponding to the order of the bids. When players match, the player in the highest position on the scoring track, indicated by the colored tokens, will get to choose a tile and the other player then gets a “hazy memory” tile, which features a wild pattern to be placed at the end of the game. 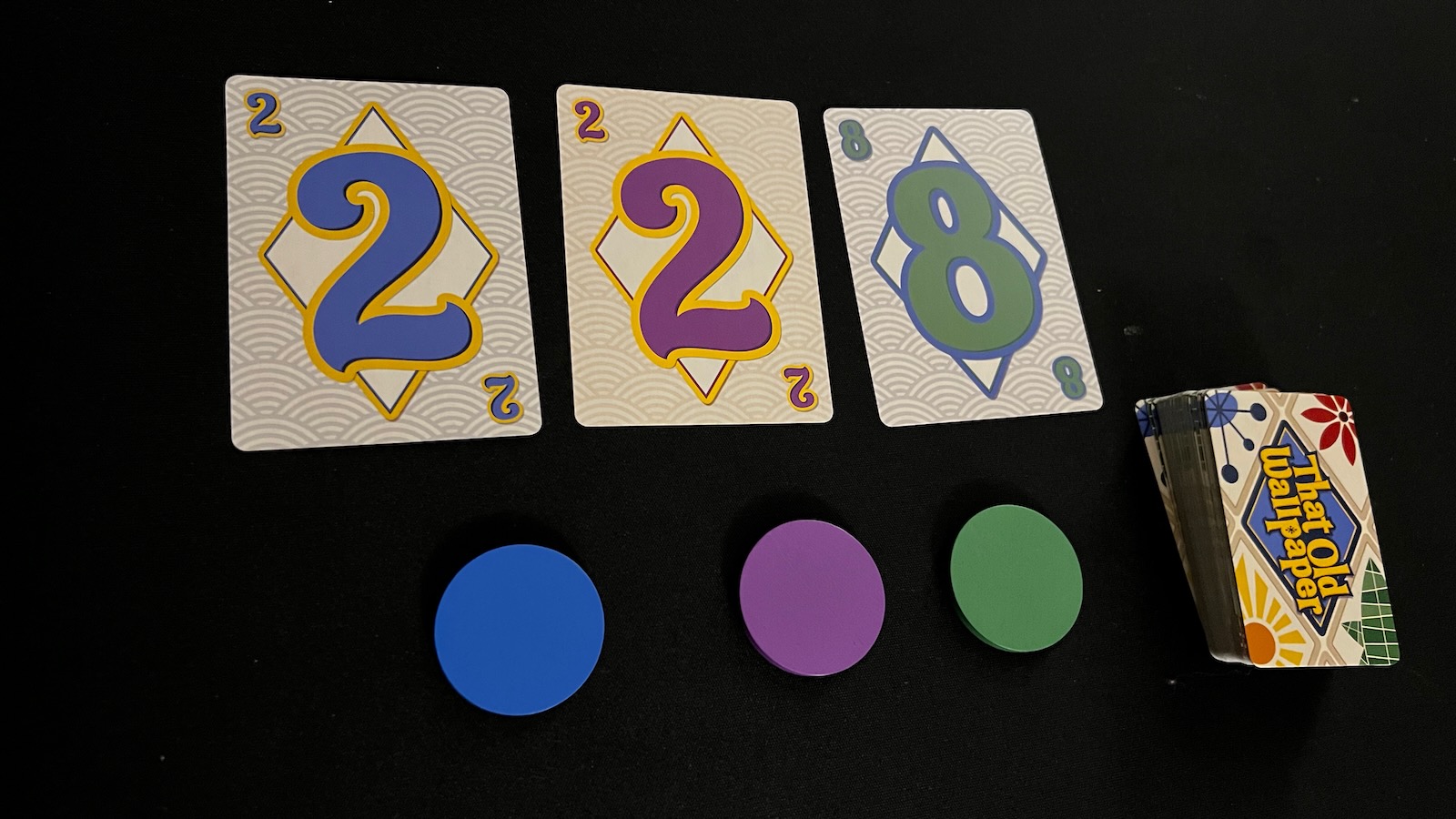 Players that bid the same number, use the tokens to determine the winner.

The tiles in the game feature eight different patterns in four different colors and one special wild pattern/color. Each of the four colors contains two different patterns, one with a single large item and one with multiple small items. The goal for the players is to try and get the same amount of matching patterns in each color category. For example, having four large blue patterns and four blue patterns featuring the smaller items. Once drafted, players try to match patterns on their wall with cards being placed adjacent to another tile. Wild patterns will complete whatever they are matched up with, with the exception of other wild tiles. 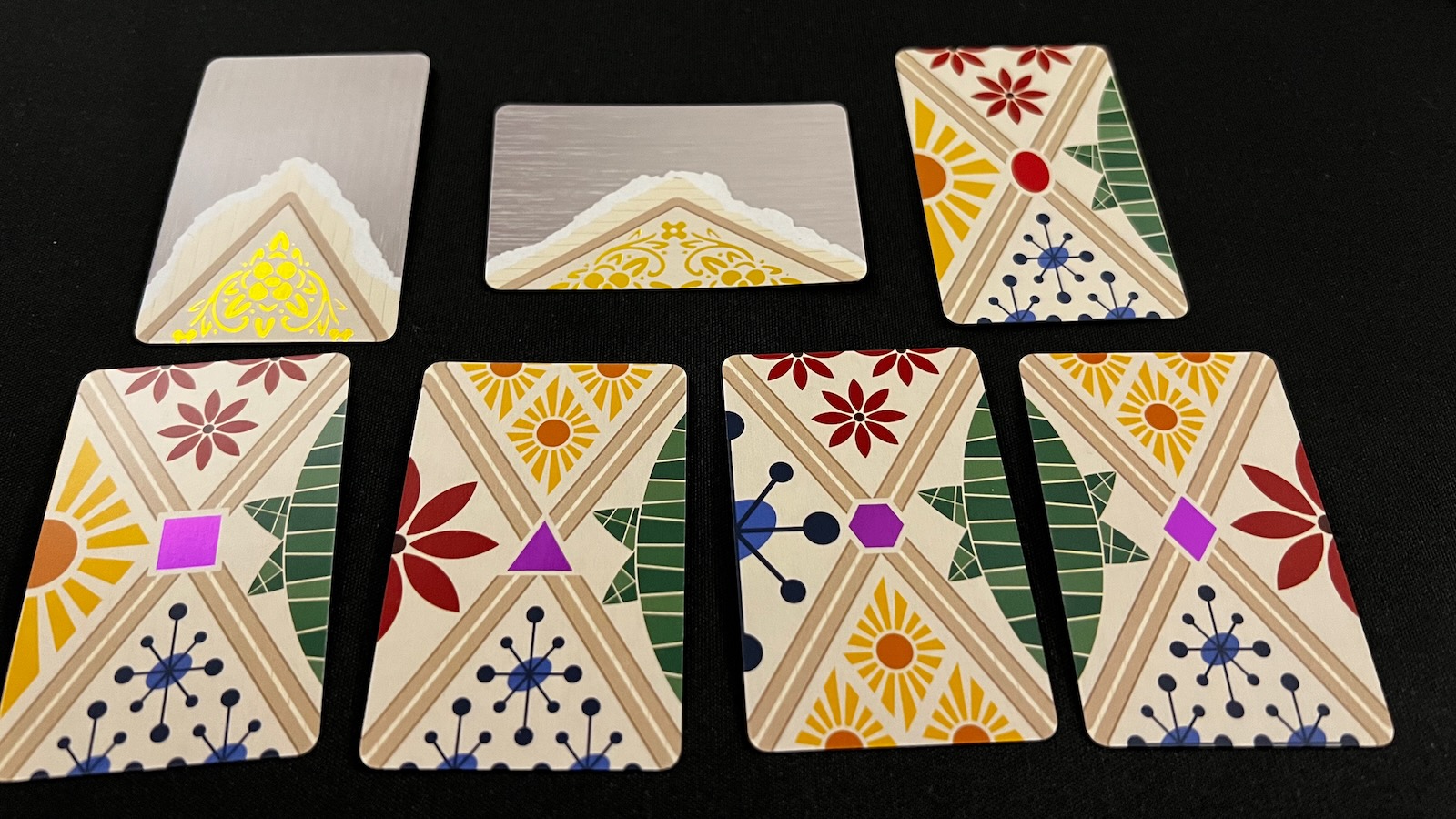 All of the icons and patterns featured in the game…except for the small green.

Players continue to bid on cards, draft wallpaper tiles, and redraw to their hand a limit of five cards each turn. When players run out of cards to draw, the round ends and players are able to reset their decks. Play continues until the end of the third round.

Scoring can be somewhat confusing. Players will count up the number of matching sets in each color/pattern to get eight numbers. Players will then compare the two values at each color and pick the smaller number. They then multiply this smaller number by two and repeat for all four colors. Some tiles feature unique symbols in the center that will affect scoring. Red circles allow more cards to be dealt in the first phase for players to pick up, but players will get penalized for having the most red circles on their wall and rewarded for having the least. Purple symbols give players points for each unique symbol on their wall. Finally, the player in first place in turn order tokens will score an extra two points. The Player with the most points wins. 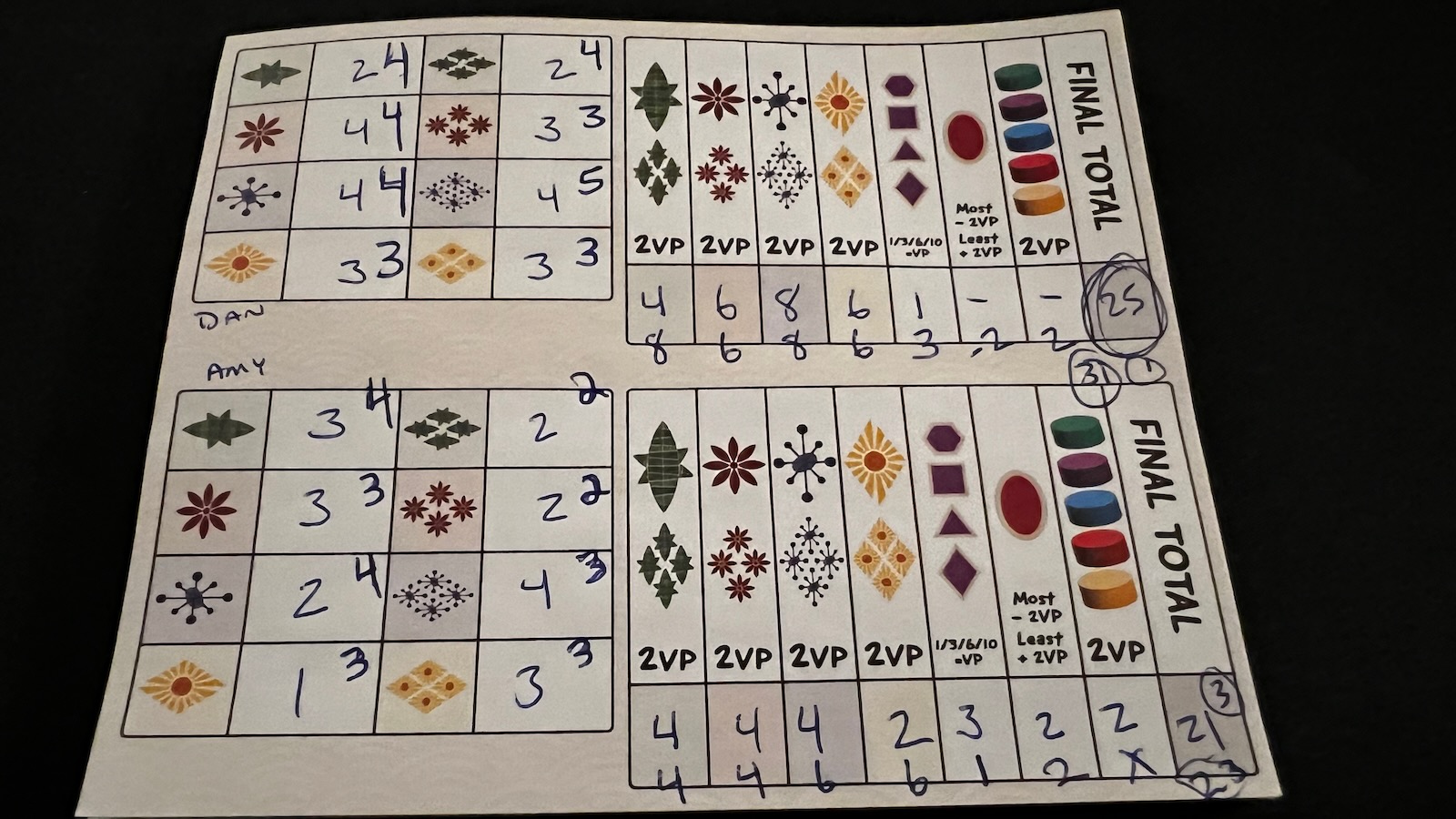 For a smaller game, the production value was on point. The cards are of a good quality and the gold reflective finish on the wild patterns, the hazy vision cards, and the special purple symbols was a nice touch. The colored player tokens were light and I would probably have wanted them heavier if they had a more prominent role in the game, but they are fine for their role.

Some parts of the game do suffer from the presentation. The artwork on the cards was a little much. The patterns chosen on the cards clashed quite a bit and made it difficult to keep track of how many of each pattern you had on the board. There were numerous times that players lost track of their pattern counts, which caused some end game scoring difficulties. The symbols placed in the middle of some of the cards were hard to see and distinguish at times as well, causing some errors in how rounds were played. I know this is a small thing, but the scoring sheet could also be better. The scoring table comes with two to a sheet and each player needs their own. In a four player game, you are sharing a small sheet of paper between two people and using up paper like crazy. 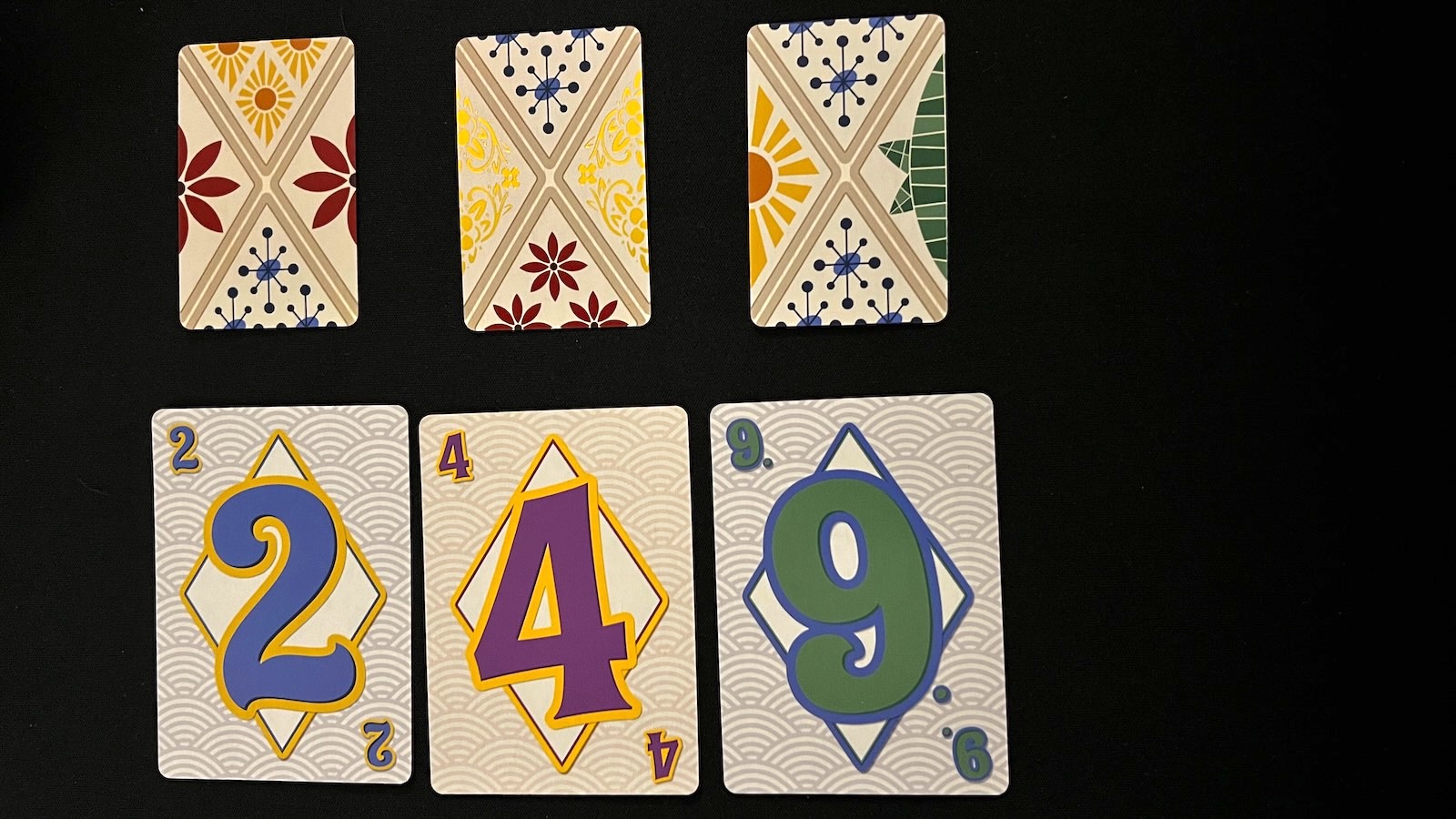 Players bid to take cards to add to their tableau.

The gameplay is definitely on the lighter side. The first phase is really the only part that involves player interaction and any real tension. You have to strategically think about what card you would like to bid to get the tiles you want off of the board, but can be thwarted if someone is going for something similar. Play a mid range card to pick the middle column and then someone plays a lower mid range card and a low card to shift you into top position. After getting your tiles, it’s a simple matter of placing it to score points. Without restrictions on how big your wallpaper tableau can be, you can usually avoid problematic placements. The scoring at the end can be a little confusing as well for newcomers. Taking the lower number of two patterns of the same color and multiplying by two can be a mouthful and hard to grasp.

At the end of the day, this game was fine for those who like matching style games and would be great for someone looking for a filler or something without much depth. For me, in a world of filler card games, I wouldn’t see myself reaching for this one very often.

A card drafting, matching game of patterns and colors that may fill a small niche, but not one I would come back to time and time again.

Dan is a newly married educator from Colorado. Growing up as an Air Force dependent gained him lots of new perspectives on the world and a love for making new friends, especially over a good board game. When not at school or playing a board game, Dan is probably at the gym or a local sporting event. Dan loves heavy euros, adventure, and living card games.
Related Articles: Tabletop, That Old Wallpaper
Share
Tweet
Share
Submit