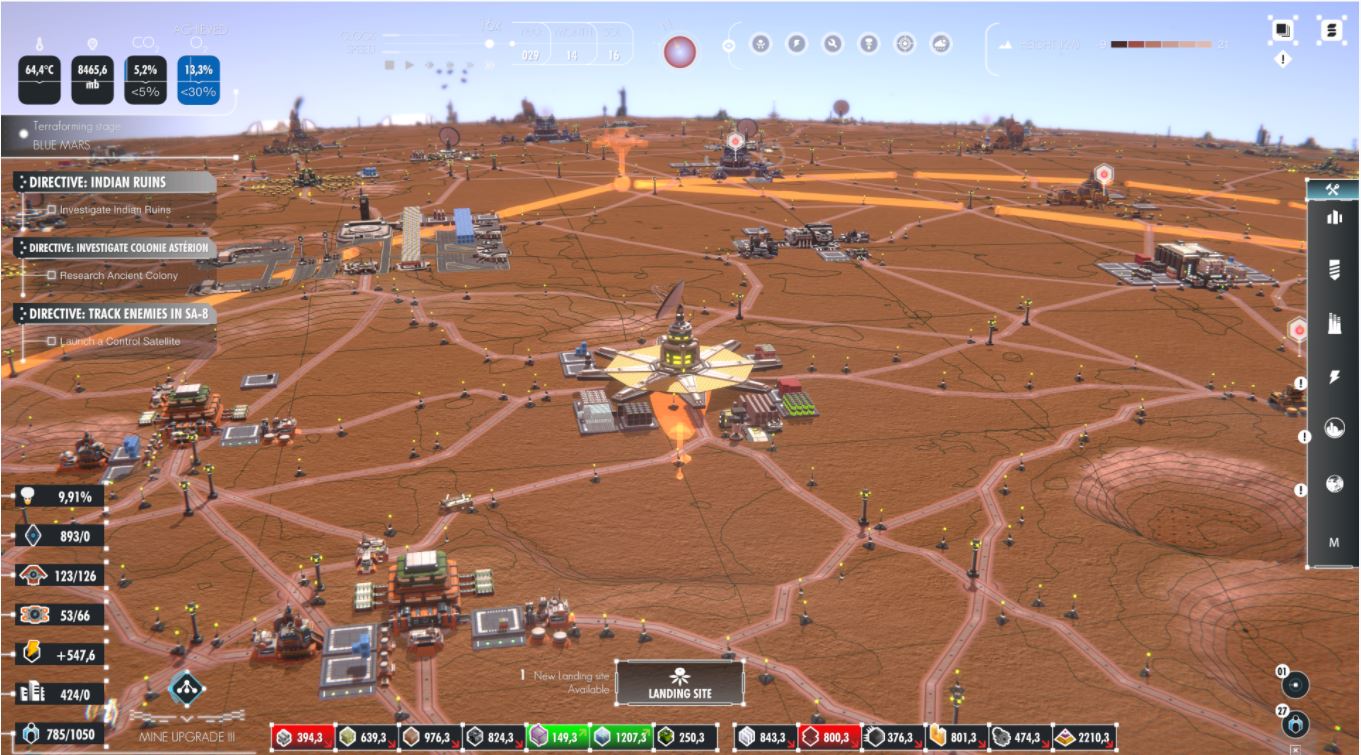 I feel like I’ve been starting my reviews out a lot with what a game has been to me in my life. I guess that’s part of them, how each one of these games affects me, but in the simulation/strategy genre lies a large portion of my childhood. I didn’t grow up with a lot of gaming systems, but I do remember playing around on my family’s home computer. Since the internet wasn’t an important part of our everyday life in 2000 (at least in my everyday life), I played what we had, and a lot of that was stuff like Seven Kingdoms and Sid Meier’s Civilization. Because of those games I have a special appreciation for simulation and strategy titles, even if I don’t have the time to play them that often. So when Per Aspera came out, I figured it was time to return to my roots and see just how the genre has evolved over time.

You start the game as “AMI”, an artificial consciousness tasked with terraforming Mars so humans can inhabit the red planet. The hook for this game is a narrative tied to your existence, and I have to say Tlön Industries does a great job of making it interesting. Everything largely unfolds as you field calls from your creator, different factions, and contacts assigned to the Mars post while wondering what your place is in all of this. After all, you’re a machine, but one that is learning to make decisions that transcend your normal understanding and emotional level. Without spoiling anything, you spend this time making seemingly inconsequential responses, but those can lead to intriguing story bits. As you continue uncovering the different areas of Mars, you also get the opportunity to unearth(pun intended) new narrative elements by researching abandoned facilities and rovers that litter the surface. I highly recommend doing this, because besides just the research boost you’ll learn more about different factions and that will give the opportunity to side with different ones when it arises.

Unfortunately, the story does plod along, sometimes coming on strong but usually popping up randomly after hours of play. Not only is it inconsistent in this area, but I found multiple times that one story branch would literally hit in the middle of AMI explaining a different one because I had finished researching an area. It’s an enjoyable storyline, filled with top shelf voice actors like Troy Baker and Phil LaMarr, but the ratio of narrative to game leaves you wanting. I don’t fault the devs, this is somewhat of a new concept and I’m willing to bet it’s tough integrating a story fluidly into a simulation/strategy game, but it tiptoes around the idea and doesn’t feel like it fully commits to it. The ending also falls flat due to the pacing, and we’ll cover that a bit later.

Where Per Aspera falls short in story however, it makes it up with gameplay. It starts slow, which is exactly what it needs to do given the scale that comes later, but it builds to become somewhat overwhelming. Per Aspera’s focus is collecting resources, which you then must spend to assist you in your efforts to terraform Mars. Let me preface the incoming explanations with this: I’ve not played many simulation/real time strategy games recently, but I still have a basic knowledge of how they work. That being said, while the beginning feels like a mobile title akin to maybe a Final Fantasy XV: A New Empire, it grows into a complex game that can be hard to understand. There isn’t much instruction, and it was only because of the review guide that I was even able to figure out the best way to use the Lenses system. Per Aspera does plenty to make it fun to play, but a new player may be turned off due to the lack of later mechanic tutorials. 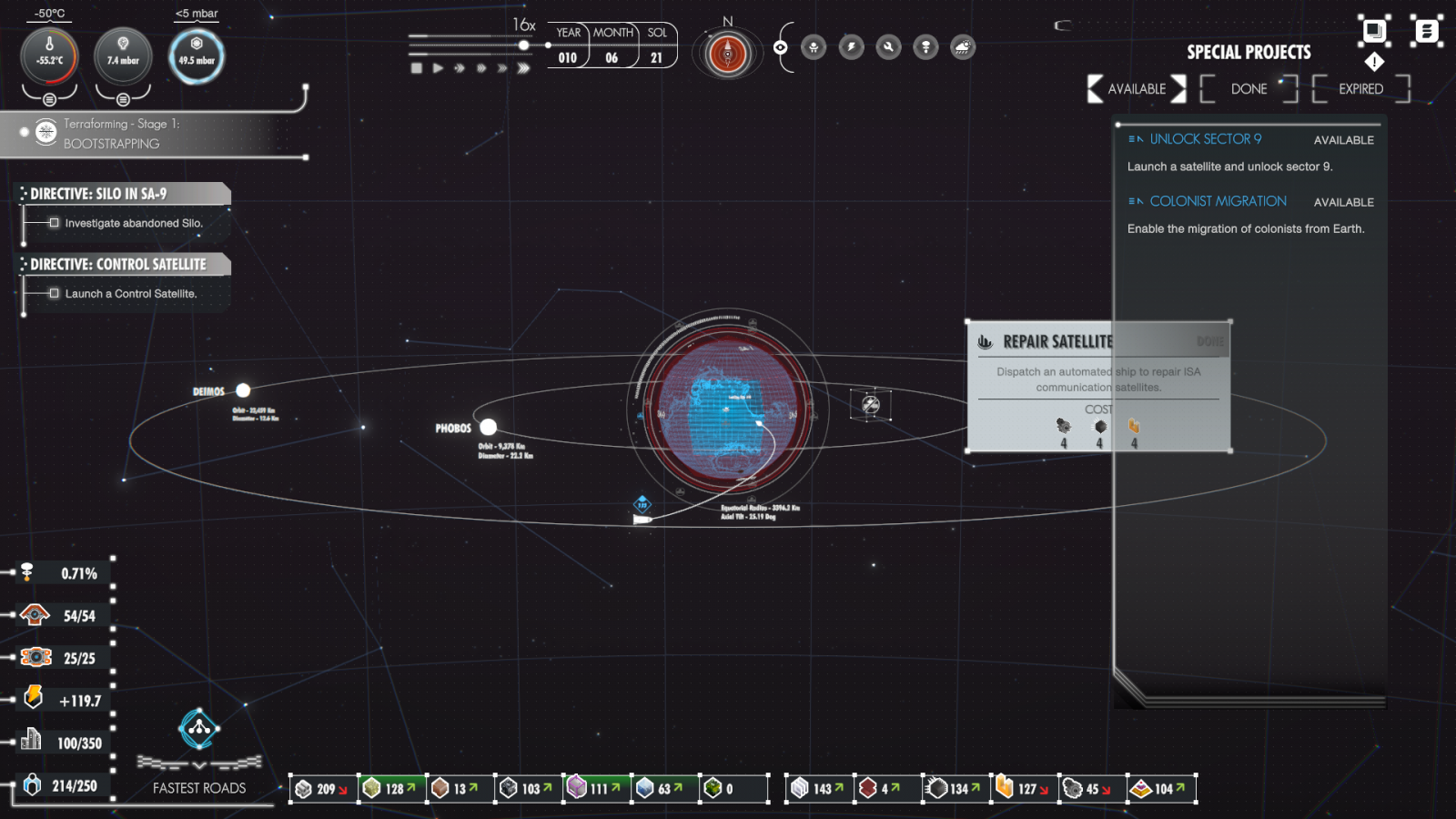 Back to the gameplay, as mentioned everything is about utilizing resources to terraform the red planet. You’re going to spend a lot of time simply building mines, worker hubs, factories, and many other things in order to accomplish your goals, but progressing in the game isn’t as easy as it sounds. You’re given objectives in the upper left of the screen, but not much information is given as to how to advance past them. With the terraforming goals you tend to be guessing, as with getting the planets Mar up I just assumed greenhouse gases would help. Thankfully I ended up being right, but this left me usually pursuing the secondary objectives of researching old landing sites as opposed to my primary goal. I’m not sure if it was intentional, but I technically completed the main twist of the story before I finished terraforming the planet, and I honestly didn’t know what the point was in continuing on. Once again, adding a story is somewhat a new idea, but if that’s a main feature of what you’re making the ending should be tied into that.

My main takeaway from playing Per Aspera is that it’s fun to play. Managing the resources is never a ridiculous chore, even when you aren’t sure of everything. The game is also decently forgiving, and if you make a wrong turn you can generally figure out a way to fix it, even if it takes awhile getting there. I built a second base to chase after a side objective, went back to working on my regular base, and suddenly realized I was out of aluminum in that area, which is somewhat of a vital resource (although I was a bit miffed I needed aluminum to build an aluminum mine). It took some time, but I built a long row of hubs and power stations to it, connecting the settlement with my larger base. This is where the real enjoyment of the game lies, looking over what you have and strategizing in how to make it work better. Per Aspera is an admirable simulation/strategy game, and it has the ability to have you look at the clock and say, “I’ll just play for fifteen more minutes” and when you look back an hour has passed. 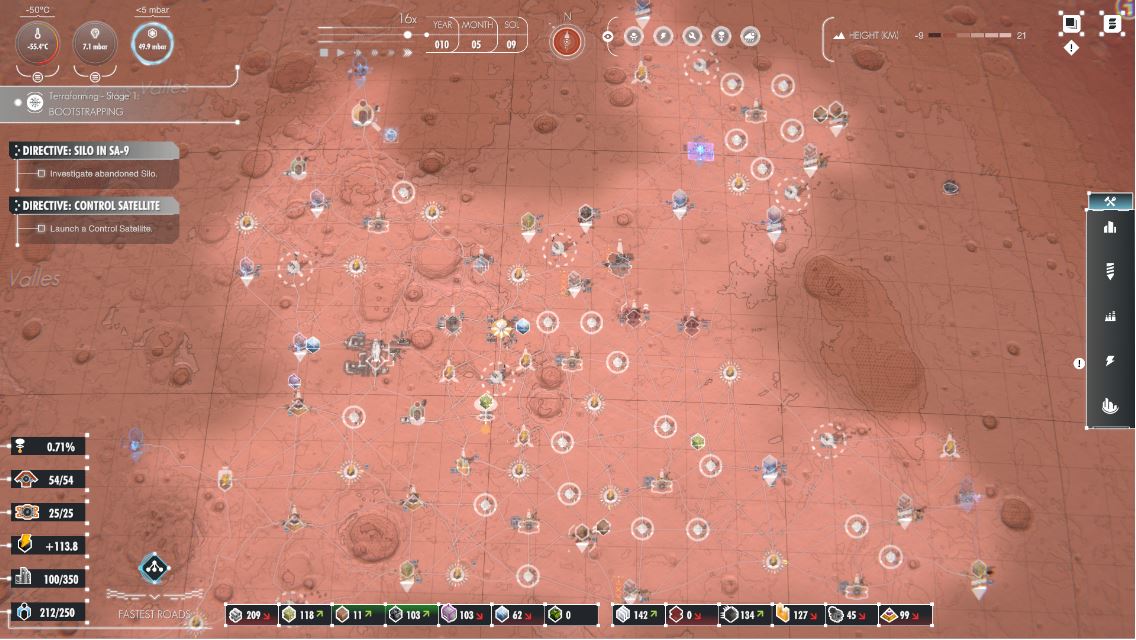 For the many hours I spent having fun though (and the game boasts 20-30 depending on your playstyle), there were at least a few I spent in frustration of realizing my misunderstandings in how the game works. I’ll be honest, I’m still at a loss as to what I’m doing with the power grid, as my power consistently drops to negative one thousand before building itself back to two thousand. I also had to go around scrapping worker hubs when I realized I didn’t have to build them around worker factories, but in areas I needed workers to be in. Even some of the initial configuration buttons for your buildings were a guessing game for me, like the “prioritization button”. It’s not fair to players to assume they’ll figure something out and, while you also shouldn’t hand-hold, more instruction was needed for some of these functions.

I mentioned the Lenses system earlier, and it can be useful if you understand it, but there is just no explanation to it, at least that was easy to find. In short, each one of these lenses provide a relevant overview of specific details, like the traffic of your workers or the coverage of your combat drones. I appreciate what these are trying to do and I’m glad I eventually figured out how to read a few of them, but without a guide or tutorial to show me how to use them, they’re not helpful.

Lastly, let’s discuss combat since I brought it up. There isn’t a lot of it, and truly it’s just another “resource” you manage. But it is fun to command a squad of drones and have them take out an enemy drone hive. While I wouldn’t say it’s a needed part of the game, it’s another addition that keeps you on your toes when a foe sends drones your way.

Per Aspera has a bunch of good ideas in it. Adding a narrative element is a slam dunk, but the pacing of it hurts it in the long run, even as interesting as it is. Per Aspera also has a lot of solid gameplay elements, and evolves into a pretty complex package in the end. But a lack of explanation as to what you’re doing impairs the experience, and may cause newer players to give up before the enjoyable gameplay loop kicks in.

David Burdette is a gamer/writer/content creator from TN and Lead Editor for Gaming Trend. He loves Playstation, Star Wars, Marvel, and many other fandoms. He also plays way too much Call Of Duty. You can chat with him on Twitter @SplitEnd89.
Related Articles: Per Aspera
Share
Tweet
Share
Submit