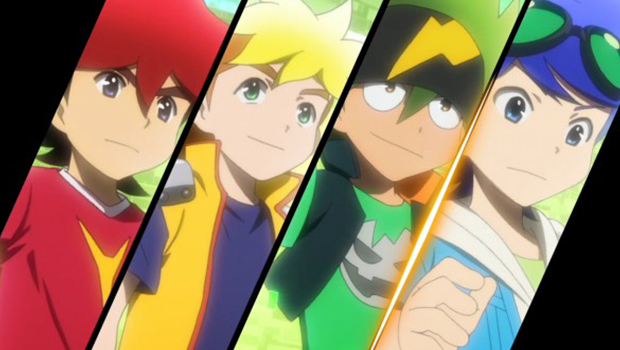 Tenkai Knights Brave Battle is a video game adaptation of the Canadian-Japanese anime series by the same name. Viz Media has produced other children’s anime that you might be a little more familiar with (Pokemon, Sailor Moon), while the animation studios, Bones, is responsible for animating plenty of widely-loved animes such as Fullmetal Alchemist: Brotherhood and more recently, Space Dandy. With two highly renowned studios producing the anime, it should come as no surprise that an equally accomplished game design studio would develop and produce the game. The studio in charge here is Bandai Namco Game, known for developing plenty of extraordinary games that are in some way inspired by anime. The .hack//G.U. series, the Tales of Series, and Ni No Kuni all come to mind. Given the track record and talent behind the game, Tenkai Knights Brave Battle should’ve been another great game to add to that list. Sadly, that’s not nearly the case.

At its core, Tenkai Knights Brave Battle is a fighter with a touch of platforming on the side. The game utilizes its mission mode in order to tell the story of the Tenkai Knights and, quite frankly, the pacing is terrible. Without going into too much plot detail in the interest of not spoiling the story for those who wish to experience it first hand, the story begins with a retelling of the legendary heroes known as the Tenkai Knights and how they triumphed over the evil Villus on the planet of Quarton. Generations later on the planet of Earth, Gurren Nash and his friend Ceylan Jones wander into a strange antique shop where they buy a couple of strange blocks which the two boys soon learn are capable of transforming into mechs and have strange dreams of fighting on Quarton. The children are soon informed that they must save the planet and are quickly thrown into battle.

As soon as you start each mission, you’re presented with cutscenes which utilize small portraits of the characters and text boxes for dialogue. While, this isn’t an inherently bad way to tell a story and has been done very well in the past, Brave Battle drops the ball here by using voice acting (typically at points where the story is considered most important) in a pretty strange way. The problem here is the inconsistency of how the voice acting is handled. Occasionally, there are  scenes where one character will speak but another will only have a text box to read from, giving the scene and character development an unnatural flow. Another major problem is just how fast the story is told. Cutscenes use minimal dialogue, which makes the story events that much shorter and in turn leaves you with almost no emotional attachment to the characters, completely losing any sense of care as far as how the story plays out.

That’s just the tip of the iceberg as the game does an even worse job in the gameplay department. As a fighting game, this is where I hoped Tenkai Knights would redeem itself. The game places the player in a small square box with platforms and enemies in set places. The goal of the missions given here are typically to destroy a certain number of enemies, collect a certain amount of loot from fallen enemies and sometimes its simply to survive for a set amount of time. As you’d expect, you dash and jump around the platforms with your mech in order to maneuver your way around the stage, while battling hordes of enemy robots which you must defeat in order to clear the mission. The starring Tenkai Knights from the anime are all here and playable. Bravenwolf, Tributon, Valron and Lydendor all wield a specific type of weapon as seen in the anime, such as swords, spears and even a chain knife. Each Tenkai Knight uses a different weapon in combat so the way they control will vary slightly  from mech to mech and on top of that, they all have differing stats which makes the way they are handled even more diverse. As a further level of customization, you’re able to change which weapon, shield, and booster your fighting robots have equipped. For example: If you enjoy playing with the chain knife but don’t like playing as Lydendor because of his abysmal HP or you prefer to play as Bravenwolf, being the mech with the most balanced stats, you can change their equipment around if you choose to, allowing for a level of customization that the player might enjoy.

The basic gameplay mechanic isn’t completely terrible and occasionally does offer some hints of challenge. However, there are a couple of crippling problems with it that stop the game from being more than passably enjoyable at first but painfully boring after a while. The first of these problems is just how unnatural and difficult it feels to play Tenkai Knights with the standard 3DS circle pad. I found that using the d-pad here is a little more tolerable but the controls still feel pretty wonky overall. A huge factor that adds another level of frustration to the game’s controls is the platforming which requires you to be incredibly precise with your jumps which in turn makes something as simple as moving around the level more difficult than it needs to be. As previously stated, most of the missions you acquire involve killing a certain amount of enemies and these missions are ridiculously dumbed down thanks to the game’s respawn system.

Once you’re dropped into the battlefield, there are set areas where enemies will appear and, typically, they appear on opposite sides of the map as they wait for you to attack them. Destroy one and you can simply dash away to the next checkpoint which saves you a lot of time, as opposed to taking your time to try and engage the rest of the enemies. This gives the player zero incentive to try and confront other enemies on screen when you could simply dash for the exit and move on. However, say you do choose not to play the game this way, there are an extremely limited number of enemy soldiers to fight which eventually makes the monotonous task of finding an enemy and destroying it as you move on to the next feel like a chore. Titan Mode battles (which are few and far in between) don’t do the game any favors either as they feel just as repetitive and can be defeated with just as much effort, or should I say, lack thereof. Attack, back away during their invincibility frames, attack again. Rinse and repeat.

With the studios behind it, on paper Tenkai Knights looked like it could have had a solid chance at being something better than the sluggish and repetitive button masher we ended up with instead. The dialogue is uninteresting and the missions you embark on are almost all identical. Tenkai Knights fails to meet expectations in every department and as a game based on a kids T.V series that is based on a children’s toy line-up, those expectations weren’t very high to begin with.

What little fun Tenkai Knights Brave brings during the mech-on-mech battles is almost entirely overshadowed by the game’s incredibly repetitive nature. Even the surprisingly robust customization that the game offers isn’t enough to warrant the rest of the package.