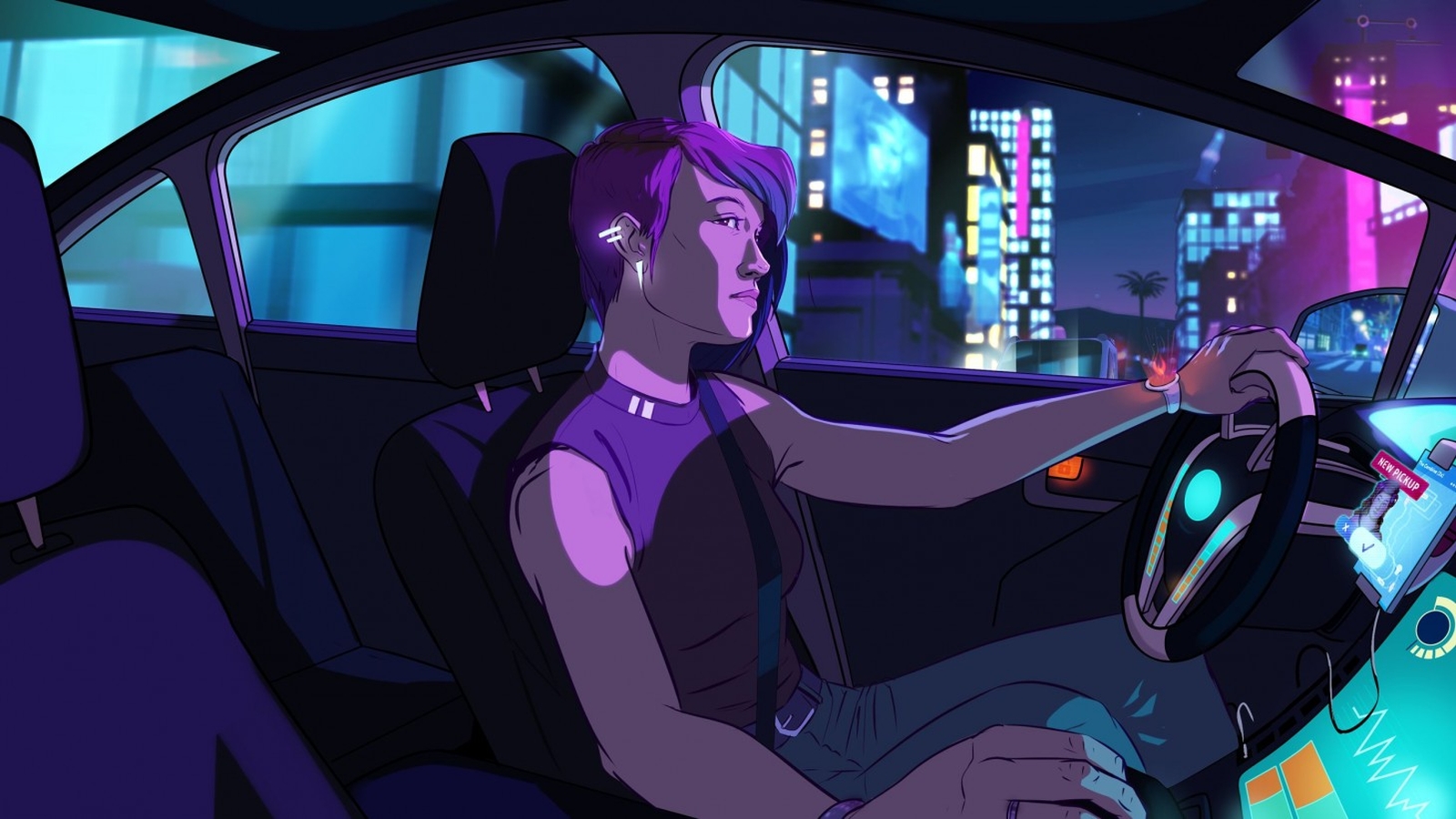 Lina is part of the gig economy. She’s a driver for Neo Cab, one of the last remaining non-AI cabs. After reuniting with her close friend Savvy, she drives to the neon-bathed city of Los Ojos with stars in her eyes. Before she can settle into her bright new life her friend Savvy disappears. Lina must balance her need to earn enough to stay on the road, search for her friend, and navigate a world full of colorful characters. Drop the flag, and welcome to Neo Cab.

At its most basic, Neo Cab is a noir-Otome. While Neo Cab takes place at an unspecified time in the future, developer Chance Agency’s intention is immediately apparent. Every interaction with your passengers (coined “Pax” in the game) brings a fresh sprinkling of crazy technology into Lina’s life, but underneath all of the neon and tech lies real human beings with real human problems. The world of Neo Cab, while futuristic, is also very much now, and that isn’t the only connecting thread to our real world. 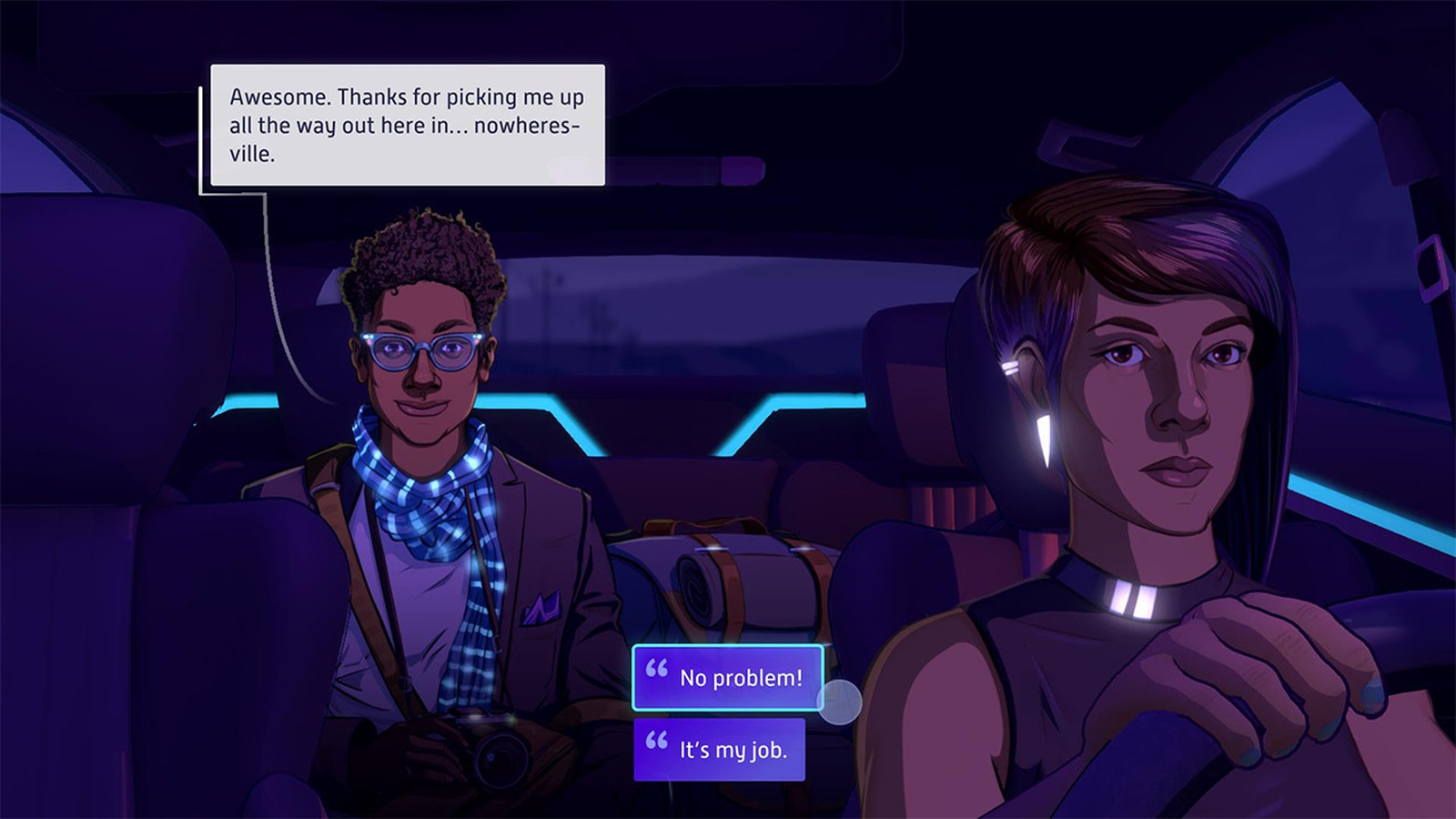 There’s always a whole host of characters just waiting for a ride.

Lina’s cab is one of the last human-driven cab services in Los Ojos. Replacing them is a mega-corp called Capra that has a.) replaced the currency, b.) flooded the streets with AI-powered cabs, and c.) own all of the electric car infrastructure that everyone must use. If this sounds like Facebook’s Libra currency, Tesla’s AI-powered cars, and Tesla’s charging infrastructure, you are getting the picture. Components of what makes Neo Cab real are deeply rooted in our own reality, and just like our reality, every person you’ll interact with has their own self-validated opinions on the changes in their world. All of this to say that, while Neo Cab looks like a cab driving mystery solving game, the subtext is far more deep.

Mechanically, Neo Cab’s core gameplay loop is straightforward. Lina opens up her Uber-like app, selects a passenger (each with their own rating out of 5 stars), and then takes them where they want to go. As Lina relies on her own star rating for tips and to retain her job (remaining under 4 stars for extended periods will cause her to lose her job), how she earns those stars relies on the quality of the conversation she offers. To help, Lina’s brief reunion with Savvy results in her getting a special wristwatch called a “FeelGrid” that visually represents her emotions. It sounds easy enough, but the reality is not so simple. The best part is, at least on PC or Nintendo Switch, you can try it out for yourself — check out Steam or the Nintendo eShop for a short demo. 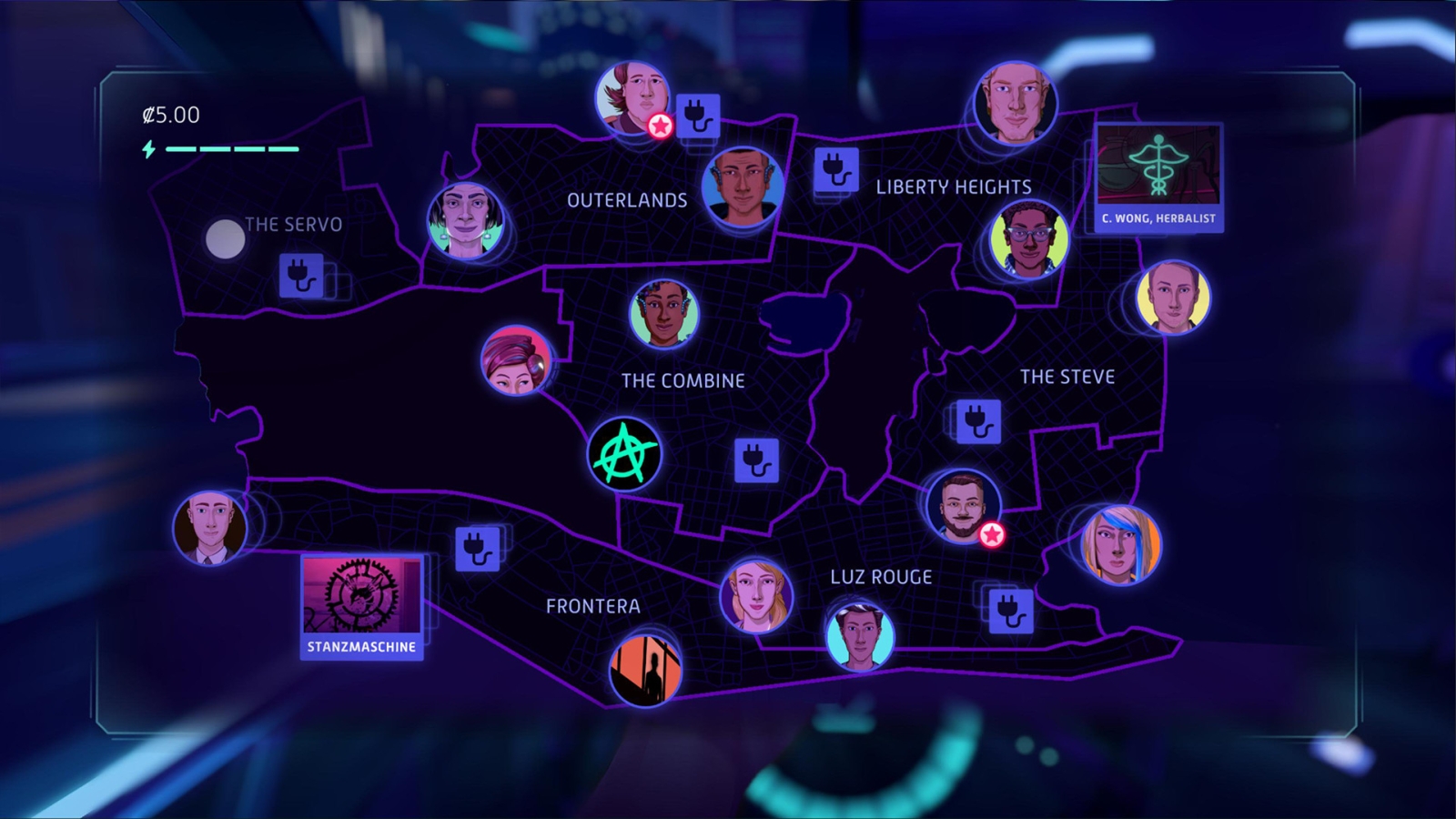 Who will you pick up and talk to? The choice is entirely yours.

Over the course of a week, Lina will pick up a completely crazy cadre of people. One ride might be a lady who I came to affectionately call “the math magician”, an overly sheltered (but not the way you might imagine) debutant, no shortage of crazy cultists, and even tourists who debate (at length) whether you are a robot or not. These people each have their own agenda, and the bite-sized interactions with each of them culminate with Lina getting paid, and whatever rating they might provide. The problem is that sometimes Lina’s attitude can get in the way.

The FeelGrid indicates a general idea of the intensity of Lina’s feelings on a subject, but it’s not as black and white as “angry, sad, or happy”. When Lina’s attitude pushes out to the edge, she’s no longer allow the player to select certain dialogue options, even when those options are the only right choice for the situation. It makes the story feel forced in sections, especially when she’s trying to solve the two primary mysteries that serve as the motivation for Neo Cab. Do I make a “voluntary” donation to the Policeman’s Ball, receiving an accompanying sticker on the back of your car for all to see, or do you knuckle down and keep your integrity, risking what little bit of Capra Credits you managed to scrape together from your past few fares? Do I mouth off to the rude person in the back seat? Knowing that my five star rating is at stake, and that the right answer might be to be quiet, occasionally Lina pushes you down a path you wouldn’t otherwise choose. I felt this most during one ending when I made a single decision that caused an inexorable slide towards an undesirable outcome where Lina wouldn’t even engage in honest conversation. It was frustrating as it devalued the moments where Lina could stand on her own two feet. In all, there are three endings for the game, with each run taking roughly three hours to complete. 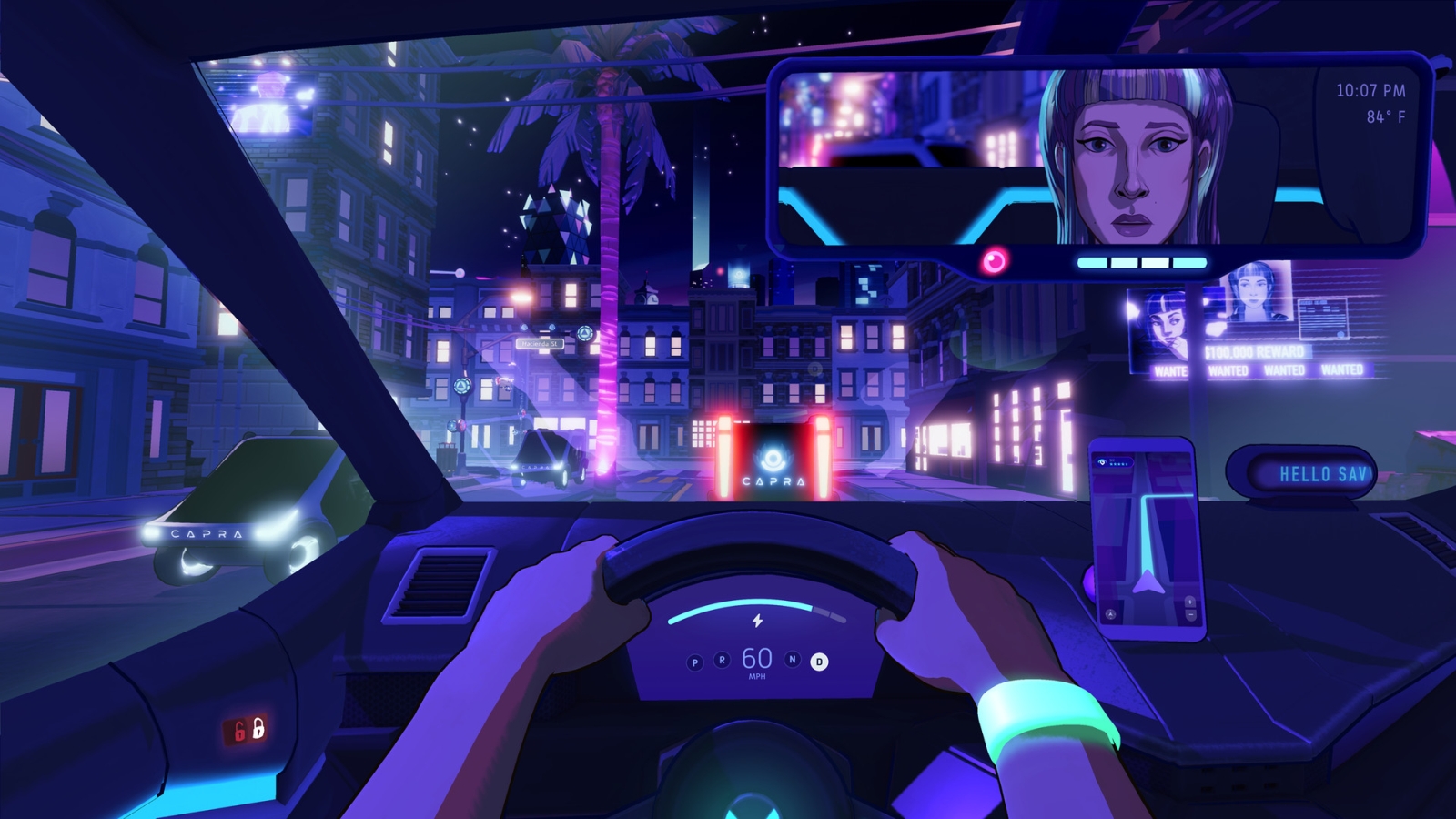 Savvy is the least interesting part of Neo Cab.

Truthfully, the three hour runtime is my chief complaint with Neo Cab. The worldbuilding is fantastic, but it’s all a bit crowded. Lina’s adventures intersect with the crazy backstories of her fares, but there are also several far larger story elements to tackle over the course of the game. It’s hard to say if the gameplay would overstay its welcome if the storyline had more room to breathe, but there’s so much packed into Lina’s week long adventure that by the time you settle in, the credits are rolling.

Lina's week-long adventure is a brief but intense adventure in technology, human nature, and all the ways those two can intersect. Where it lacks in length, it makes up for with compelling deeper stories about people.

Ron Burke is the Editor in Chief for Gaming Trend. Currently living in Fort Worth, Texas, Ron is an old-school gamer who enjoys CRPGs, action/adventure, platformers, music games, and has recently gotten into tabletop gaming. Ron is also a fourth degree black belt, with a Master's rank in Matsumura Seito Shōrin-ryū, Moo Duk Kwan Tang Soo Do, Universal Tang Soo Do Alliance, and International Tang Soo Do Federation. He also holds ranks in several other styles in his search to be a well-rounded fighter. Ron has been married to Gaming Trend Editor, Laura Burke, for 21 years. They have three dogs - Pazuzu (Irish Terrier), Atë, and Calliope (both Australian Kelpie/Pit Bull mixes).
Related Articles: Neo Cab
Share
Tweet
Share
Submit