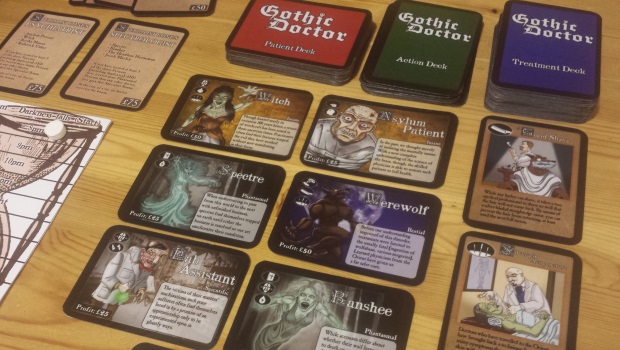 Medical school never prepared you for this. You are well versed in state-of-the-art 1850s medical treatment – prescribing arsenic for cholera patients, or a generous application of leeches for typhoid. But if you want to be a partner in this practice, you’ll have to do better than that. You need to show that you can earn more profit by any other doctor, and the only way to do that is by taking the patients no one else wants. As you enter the cramped examination room, your eyes widen as your gaze falls upon the afflicted. Before you is a fearsome WEREWOLF, clearly suffering from his ailment. You proceed to recommend a three-pronged treatment: Fang Extraction, Silver-pin Acupuncture, and a Good Shave.

GOTHIC DOCTOR is a medical/horror themed card game for 2-4 players from newcomers Meltdown Games. In this set collection game, you gather Treatments, such as Bandage Removal or Holy Water. Then you use the Treatments to cure any of the horrific Patients in the Waiting Room – Mad Scientists, Vampires, Witches, even “Legends” like Jacob Marley. Each patient earns you Profit from 25-75 pounds, depending on the number of Treatments required. The doctor who has earned the most Profit by dawn is the winner. GOTHIC DOCTOR is on Kickstarter until July 22.

The medical profession represents untapped potential for board game design. Outside of Pandemic and the childhood favorite Operation, there are no medical games of note. The theme of this game could have been anything – collecting Resources to build Buildings instead of collecting Treatments to treat Patients. Despite that, I’m happy to see an innovative theme.

Gothic horror fiction of the Victorian era is another underused genre. Blending the themes together is a stroke of genius. It is so refreshing to see a horror game that isn’t dominated by zombies. (Zombies must have jumped the shark by 2011 at the latest.) Many of the “Legend” Patients are somewhat obscure characters from British novels. Well read players will enjoy finding all the Easter eggs hidden among the cards.

The one place where the theme falls flat is in the flavor text. The game has a humorous, tongue-in-cheek tone (“curing” a werewolf with a good shave) but the flavor text on all the cards is written in a serious style. Putting some gags on the cards would reinforce the theme and make the game more enjoyable.

The game consists of about 160 cards. About a third of them are Treatments (Fang Extraction, Exorcism, Laudanum, and so forth). A third are Patients (Vampire, Banshee, Lycanthrope, etc.) with icons indicating what Treatments they need, and the Profit (points) they earn the player. Most of the rest are Action cards, which either change up the Patients in the Waiting Room or interfere with the other players. There are a few Specialist Bonus and Generalist Bonus cards that award extra points for treating certain types of patients, and four player aid cards.

Because my copy is a print-and-play prototype, I will not comment on the component quality. I am sure the retail version will be acceptable. I will however criticize the artwork on the cards. My friends and I all agree that it is not very good. It looks like the publisher asked a friend to do the illustrations, rather than hiring a professional. That is unfortunate, because the poor artwork detracts from the game experience.

As I mentioned above, the theme is unique, although the game itself is quite familiar. The main actions you perform are 1) collecting Treatments in your hand, and 2) turning in Treatments to claim Patients which are worth points. Several members of my gaming groups have noted the similarity to Ticket to Ride. The main difference is that each Patient requires one of each of several different Treatments, instead of several copies of just one type. Even the mechanic of selecting from one of three face-up Treatment, or a face-down card from the draw pile, (with a face-up wild card counting as two draws) is the same.

The only thing this game has that Ticket to Ride does not is the deck of Action cards. You can draw them in place of Treatment cards, but they count against your hand limit. There are a few good ones which allow you to manipulate the Waiting Room or attack your opponents, but a lot of them are situational and end up just taking space in your hand. In my experience, new players use Action cards enthusiastically at the start of the game, but midway through decide it isn’t worth drawing them.

When a more lucrative patient like Dr. Jekyll or Count Dracula enters the waiting room, there can be a push-your-luck element to the game. If you don’t have quite enough Treatments to claim the bigger cards, you can gamble that your opponents don’t either. You try to treat the big patient on your following turn instead of taking a smaller one now. Pulling this off is immensely satisfying.

Beyond that, there aren’t a lot of choices in this game. Usually it is best to treat a patient every turn, even if it does not earn much profit, because there are only ten turns. There isn’t much opportunity to catch up if you get behind. Figuring out the right moment to play an Action card is sometimes an interesting choice. Most of the time you will want to get them out of your hand quickly so you can collect more treatments instead.

One other element of the game is the Specialist Bonus. Two of these Bonus cards are dealt out at the beginning of the game, depending on what Patients first enter the Waiting Room. The Specialist Bonus cards give a bonus to the doctor who treats the most patients in a given category – mad scientists, beasts, etc. One of my opponents suggested dealing one Specialist card face-down to each player, so everyone has a secret objective. This might be an interesting house rule to spice up an otherwise ordinary game.

GOTHIC DOCTOR has no aspirations to be anything more than a light filler, and I do not expect anything more from it. The game is better than it looks, but it looks terrible. It has a great theme, but the gameplay isn’t very interesting. I suppose it might appeal to people who have an interest in the subject matter.

It is a rather innocuous little game. It could be a good choice for those who don’t like Coup because they aren’t good at bluffing, or Hanabi because they hate memory games.

Bottom line: Gothic horror readers, Victorian enthusiasts, and medical professionals might derive more pleasure from this filler game than is inherent in the cards themselves. For everyone else, the bland flavor text, poor illustrations, and lackluster gameplay make GOTHIC DOCTOR more of a miss than a hit.