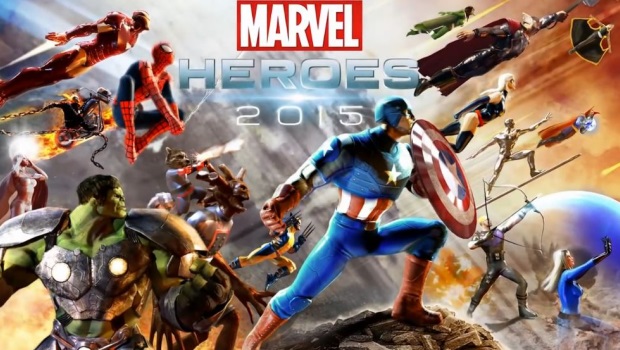 Marvel Heroes 2015 isn’t a new title so much as a patch to Marvel Heroes, so why are we reviewing it? Well in fact the changes have been significant, from assisting higher level characters with the new Omega System to boosting higher level skill points to the new raid system. Engaging daily interest with shared quests and gifts, Gazillion Entertainment is aimed at pleasing their existing customer base and bringing them into the world of Marvel Heroes.

If you’re unfamiliar, Marvel Heroes 2015 is game that plays much like Diablo–it’s an action RPG, however, it takes place in a massively multiplayer online world. Using the free-to-play model, you are given a character to start, and if you didn’t end up with the hero you wanted, you can simply buy credits and purchase whoever you want. In my case, Storm got put into mothballs for the Hulk. The review copy provided, also unlocked most of the other characters–something I didn’t delve too much into.

[singlepic id=19258 w=620 h=350 float=center]Each hero has their own skill tree, and rather than approach an MMO in the maddening effort to experience all of it, I went a different direction. You can go and play the game right now at no cost–so instead, I’m looking at the value of whether it’s worth your time to check out. Along with all the content available since last year’s release, there has been a massive list of changes and tweaks applied to each character. Most notable is the inclusion of a simplified team buff system, and ensuring each hero would have a role to play in larger groups.

I played Marvel Heroes in beta just before it was released on June 4, 2013, and while the game looked nice, it really failed to capture my imagination and I lost interest. With Marvel Heroes 2015, however, I found the gameplay to be both fun and engaging. The enemy spawns seemed to be more in line with the heroes present in the game world, where before you’d transport in only to find no enemies left to fight as higher level characters had wiped the place clean.

[singlepic id=19260 w=620 h=350 float=center] Unlike a lot of MMOs, Marvel Heroes 2015 offers the option of going completely solo throughout the game. To help support that method, each character can engage a special hero in a team-up, where they can either appear and follow you around, be called into battle for short periods, or simply offer support stats boosts.

Each hero also comes with distinctive skill trees and can be reset using a retcon device–well played Gazillion! There are also respective storage containers in what amounts to be your town chest,a common location to store goods and pass them from one character to another.

Unlike a lot of MMO’s out there, Marvel Heroes 2015 comes with PvE endgame events,basically, there is a story being told, and you have an end. With the update, Gazillion has helped keep the higher level characters playing with additional challenges, including the aforementioned raid level.

The game also boasts an array of buffs and boosts via items, and a robust crafting system whereby you can donate unwanted equipment to improve the crafter’s skill level. I found this part to be initially daunting and there was always a half-dozen people standing around the crafter.

[singlepic id=19262 w=620 h=350 float=center] Speaking of crowds, I found that combat on my highest end PC was beautiful with every setting cranked up, but on a PC like a Surface Pro 3 (i5, 8GB RAM, 256GB model), the game was playable, but choppy, even turned down to the lowest setting. That particular hardware has an Intel 4400 chip in it, so it was more an experiment than a measure of the game’s capability, and isn’t being used to benchmark the game itself. Regardless, it was refreshing to know that I could at least play it on the go if I needed to log in to get the daily gift.

I’m not a big free-to-play fan; the games that come from this model are severely hampered. In this case, the game itself and the customer focus that Gazillion has put into their redesign makes really good sense. Listening to customers and updating their product keeps it fun, fresh and relevant. Since there is no initial cost, and even other characters and costumes can be unlocked for free, we highly recommend you give it a spin. Even if you ignore all the crafting, and extras, the games’ storyline and artwork are worth experiencing.