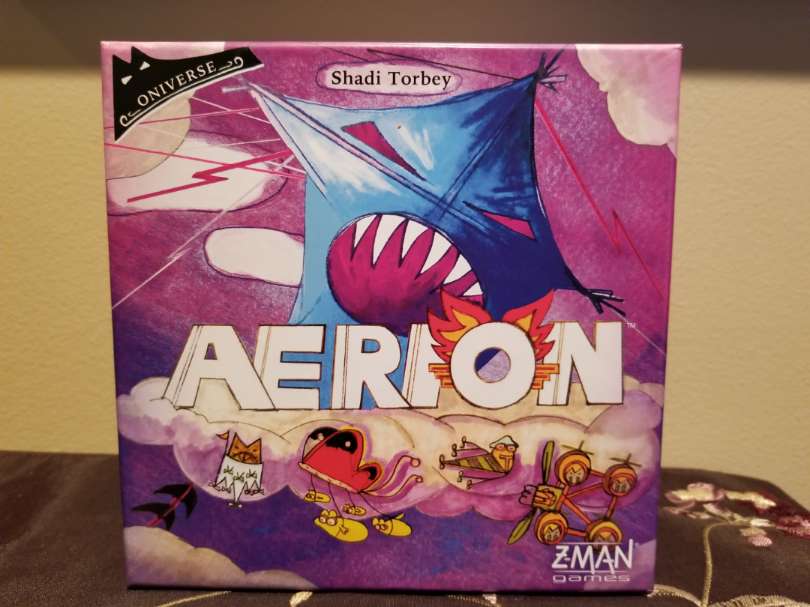 In the past, humanity wanted to achieve the wonder of flight. Visionaries such as the Wright Brothers made this possible. What if there was a tabletop based on building your own flying machines in order to achieve this goal yourself? Aerion lets you do just that as you combine groups of cards in order to build specific flying machines. It looks complicated at first, but after getting into the game, the biggest obstacle you’ll have to face is luck. Other than that, the game is an artistically gifted treat to play.

Aerion can be played solo or with a friend. The only differences between playing alone or with a friend are that you are trying to build all six flying machines yourself when playing alone and that you have nobody potentially stealing cards that you need from you. When starting the game, each player randomly picks three of the six flying machines; these are the machines that you’ll be tasked with trying to build during the game. There are also six different decks that need to be shuffled and placed facedown. Each deck is separated by a series of letters. These letters represent the dice rolls that you’ll need in order to purchase them, but more on that in a minute. The final step to setup is taking the top card from each deck and placing it face-up next to the deck. These are the obtainable cards for the time being. 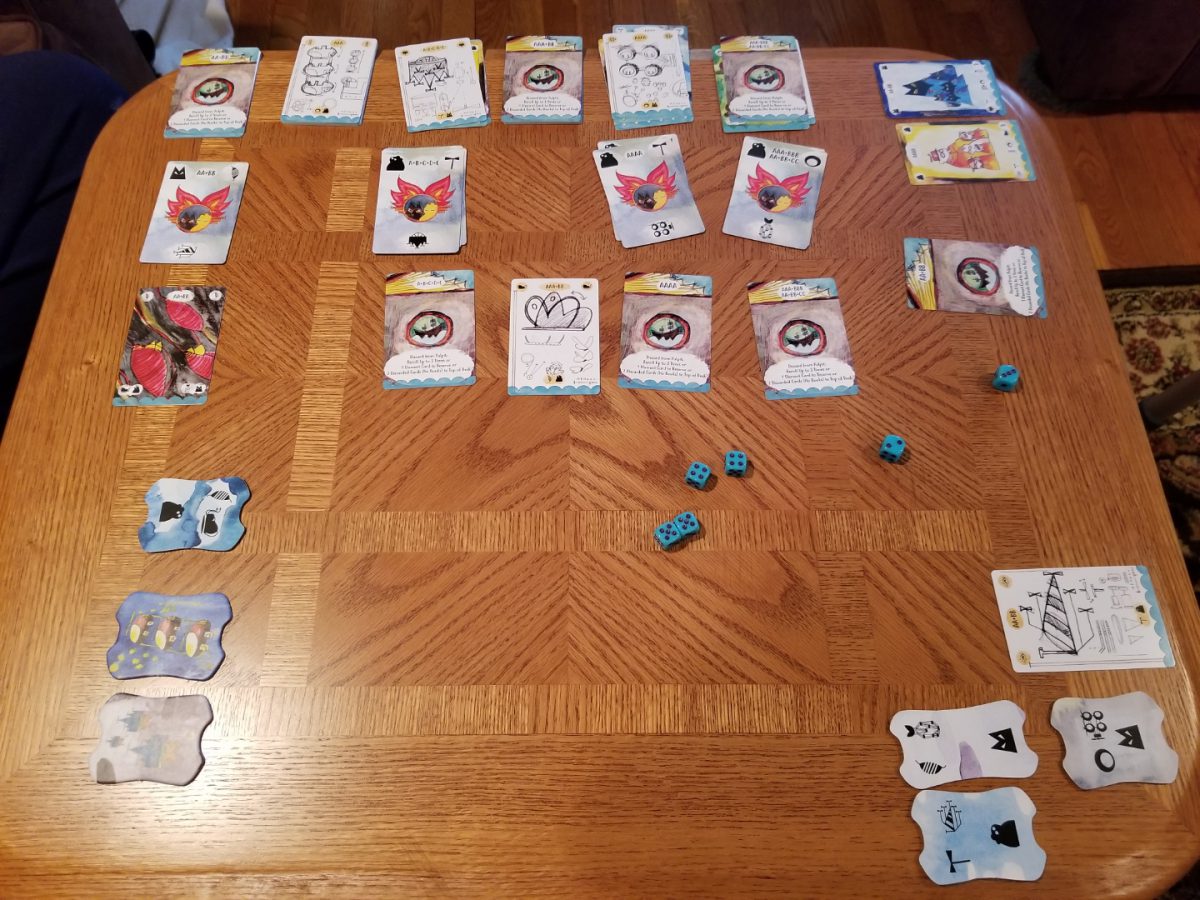 The core of each turn is rolling the six dice. After the roll, you see if your rolls match up with any of the cards available for purchase. At first, it doesn’t make sense to be able to use number rolls in order to pay letter costs, but it functions like Yahtzee. For example, if the cost is AAAA, it means you need four of a kind. Another example is AA+BB+CC, which is three pairs or AAA+BBB, which is two three of a kinds. Also similar to Yahtzee is the ability to reroll. You can decide how many of the dice you want to save, then you can reroll the rest. Before you do so, you need to discard one of the available cards as payment. If your reroll doesn’t let you obtain a card, then you can repeat this process until either you’ve obtained a card or all six cards have been discarded. Once either of these two results have occurred, then the obtainable card spots are refilled with the top card of their respective decks.

Each of the six flying machines that need to be built have symbols on the back of their tiles. These symbols represent a specific blueprint, a certain collection of parts, and a specific crew. Each machine needs one of each in order to be built, but can only be built with their designated cards. There are multiples of each type needed, so don’t worry about only having one chance to complete your machine. When collecting cards to build, you place them in your workshop. You can only have one of each type of card in your workshop, so you can only work towards one machine at a time. For example, if you already have a blueprint in the workshop, you have to either place a new one in the third workshop that both players share or save it in your reserve for later. In order to save a card in your reserve, you must have obtained a book on a prior turn. You can only hold one book at a time, but the book allows you to discard it in order to save a card in your reserve for later. The third workshop works like your primary one, but both players can set cards there. This can be good and bad; it means you have an extra area where you can try to build a machine, but it also means that your opponent can do the same. If you want, you can intentionally sabotage this workshop in order to hinder your opponent some. 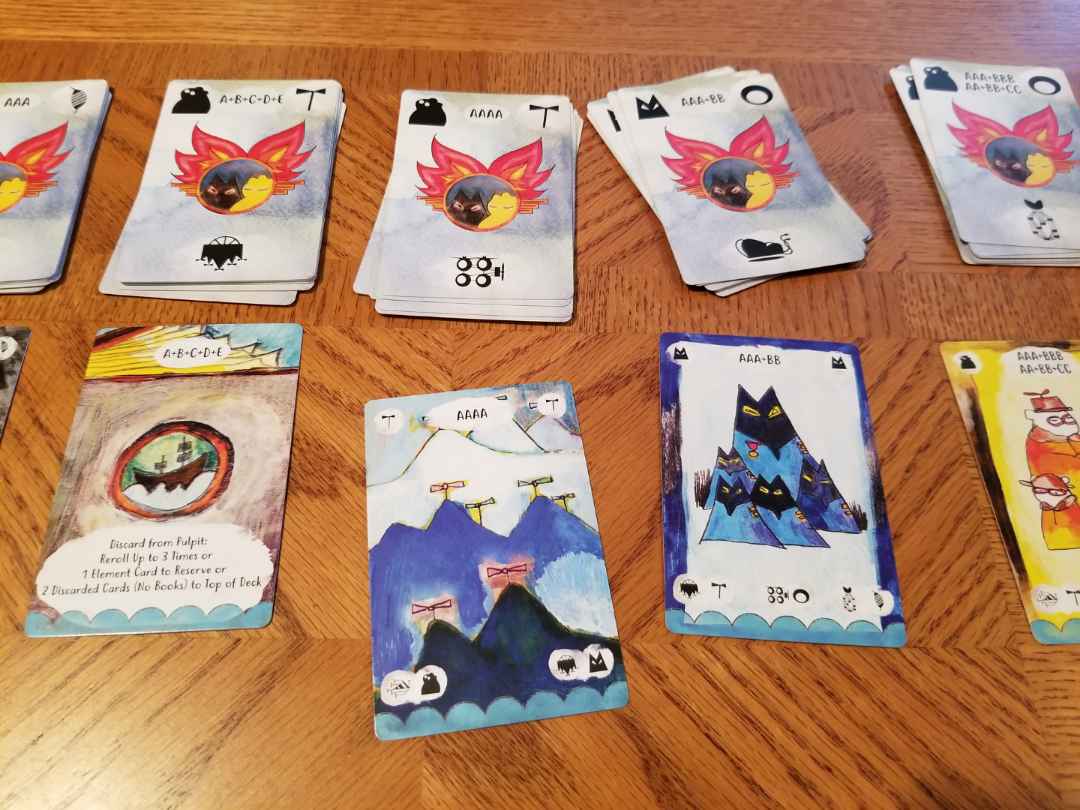 When obtaining cards to build a machine, you can place the blueprint and part cards in any order, but the crew can’t be placed until both other cards have already been set. This makes it tough if early in the game there are mostly crew cards to obtain. If you don’t get a book to save a crew card for later, you may end up having to discard one or more crew cards to make room for more viable cards. Speaking of the reserve, you can have an unlimited number of cards saved up, so take advantage of that if possible. Once all the pieces have been collected for a machine, you can flip over the designated ship token to represent its completion, and then discard those cards to their respective discard piles. This matters because one of the book’s other effects is being able to take two cards from the discard pile and place them at the top of its deck. You can’t use this to move other book cards, but you can bring cards that you need back into play. As with reserving a card, you still have to discard the book to activate the effect.

The game ends once either player has built all three of their machines (or the solo player builds all six) or if all cards have been discarded from the decks. Whoever builds all of their machines is the winner, but in an interesting twist, if nobody builds all of their machines, then there’s no winner. You’d think that whoever got more work done would be the winner, but that’s not the case here. Victory in Aerion is an all or nothing situation, and as harsh as it may sound, it encourages you to try and succeed. The downside to this is that the game relies almost completely on luck. If you get some good rolls to grab the cards you need, then you’re set. If you have bad luck, then you may end up discarding a ton of cards quickly. My friend and I had a few times where we got garbage rolls and had to keep discarding in order to get a semblance of a helpful result. This extreme focus on luck may end up turning off some players or even just annoy those who were having a good time playing previously. 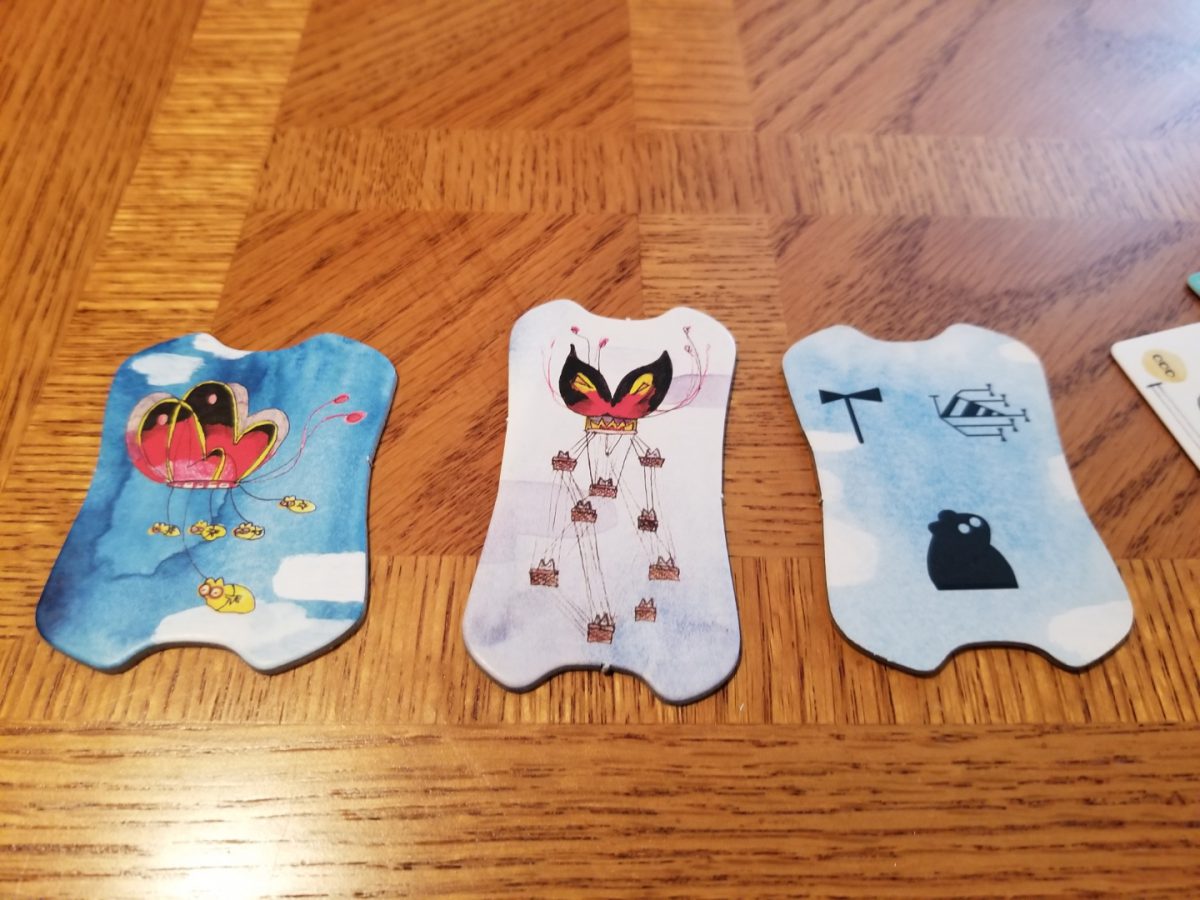 Now, the art design itself is fantastic. It looks so unique and gives off an air of whimsy and joy. It doesn’t look high-grade or anything, but there’s something about it that feels professionally artistic in its own way. If I’m being honest, the art style is what drew me to the game in the first place. You can’t help but want to just look at the images on the cards and tokens. Along with this wonderful visual appeal, the unexpectedly simple gameplay is refreshing. All of the letters make it look daunting at first, but it’s quite easy to understand after reading the rules and remembering Yahtzee. As mentioned before, the luck of the roll plays a huge role in the game, so keep that in mind. Even so, Aerion is a wonderfully crafted tabletop that I recommend to anyone looking for a short little game to play with a friend where luck is the deciding factor.

Aerion is a visually compelling tabletop where the goal is to obtain cards that help you build flying machines. The core gameplay relies on lucky dice rolls, which is interesting, but can ruin the mood if rolls aren't turning out well. At the same time, it's a charming game, even if there's a possibility that nobody will win.

Codi loves to play video games and watch movies. He will watch almost any kind of movie just to experience them. His ideas take inspiration from the shows and movies he watches, and games he plays. He also loves a good pun.
Related Articles: Aerion
Share
Tweet
Share
Submit