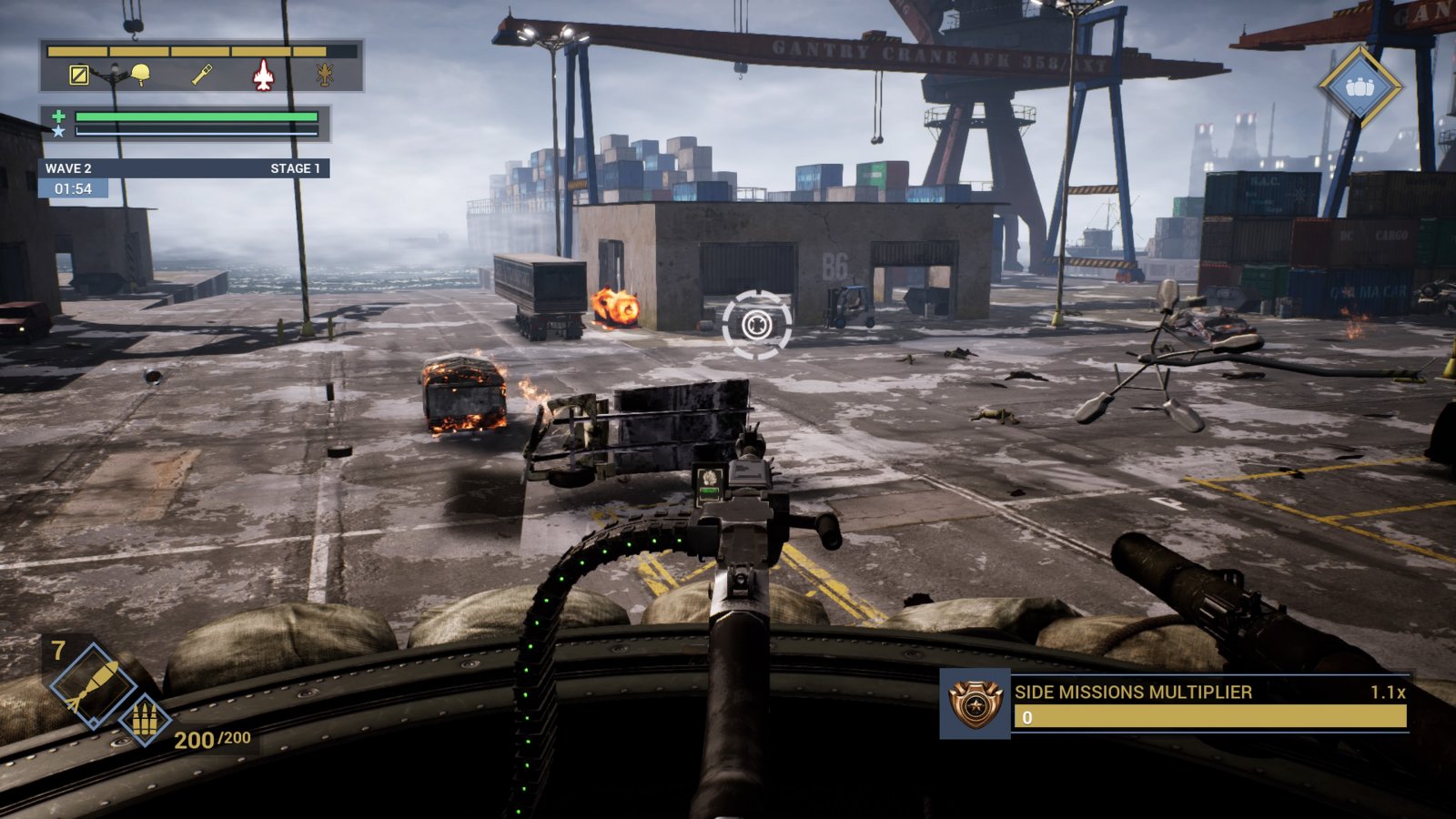 Have you ever played a shooter that has the inevitable turret sequence, and you think it’s fun and exciting for a few minutes as the game shuttles you through explosions and drama while you’re strapped to the back of endless power fantasy? Well, Heavy Fire: Red Shadow aims and misses even that seemingly easy target. The entire game has you mounted in a turret that can swivel 360°, valiantly warding off waves of attackers. Within that narrow gameplay framework it manages some novel ideas, but nearly everything about this package underwhelms and disappoints.

I’d like to start with the areas where this game succeeds, as it’s a small list. First and foremost, playing a turret sequence in full 360° is genuinely more interesting, and it forces you to be on your toes, managing threats from any angle as the firefights get more and more frenzied. But I feel like I’m stretching my generosity to grant a point in Red Shadow’s favor by attributing inventive game design to being able to turn around. It’s simply that it adds some much needed variety to what could have easily been an even more unsatisfying good versus evil fetishistic war fantasy. Sorry, I said I’d talk about what I liked first.

As you mow down your plentiful enemies, you’ll earn experience that earns you skill points which can be spent on a bevy of upgrades for your character, turret, rockets, and support skills. You can quickly earn the ability to never reload, earn health back on enemy kills, make your rockets more explosive, and so on. It never took long to earn enough points to get a new ability which made me feel like I was constantly becoming more powerful. It’s tuned that way most likely because the game is only a couple of hours long to make it all the way through the campaign. There is such a dearth of content that you are fortunately able to unlock every skill by the time you make it to the end of the game’s eight measly levels. Dang, I’m doing it again. Hang on, I can do this; I’ve got one more.

Killing also quickly fills a gauge that unlocks five support skills. You need all five bars full to unleash an attack helicopter or you can use just one bar and call in supply caches with health and rocket ammunition. It was the most interesting aspect of the game. When the fire was a bit too heavy, it gave the game a nice strategic layer. I would stock up on the supply caches so I’d be flush with rockets and have some health to spare, then I could safely work my way towards the always helpful “whirlibird” or infantrymen meant to add a few more targets for the North Koreans to aim at. It didn’t turn the game into XCOM, but it did keep it from being absolutely pointless.

The developers put in a slight nod to their local Polish supermarket chain, Biedronka. But oddly, neither the game’s setting, Guam, nor Poland uses the euro.

Okay, let’s get into why you should not play this game. Like I mentioned above, there are only eight levels in this game, but even that is not as impressive as it sounds. There are actually only four levels, but the game has you play through a day and a night version of them as eight distinct levels. You’ll play through a level and then invariably play the night version before moving on to the next proper environment. It is one of the most singularly outrageous aspects of this game that they thought it was a good idea to stretch the campaign by simply turning the lights off on a level. It’s not like those levels are so interesting or unique that it’s worth the return trip; every level is precisely the same. There are 15 waves of enemies—progress checkpointed every five—then it’s nighttime and you do it again. Plus, you’re completely planted in one spot, so it’s not as if you’re given a different vantage point in the same environment. You do each of the four areas twice and then the game kicks you to the main menu and unlocks Endless Mode. Considering how the main game’s brief two hours felt like an eternity, I’d suggest that you don’t play Endless Mode under any circumstances.

The controls are straightforward and generous enough that you never get stuck trying to pick off a single enemy. You swivel the turret with the left stick and then fine tune where you’re aiming with the right stick. There’s an indicator encircling your reticle that lets you know where off-screen threats are, but as fun and arcadey as the game can seem at first blush, it devolves into 20 minute levels of nonstop gunfire that made my ears go numb. This constant pulsing staccato noise is only broken up by an enthusiastic soldier yelling about promotions or incoming waves of enemies to your impossibly adept turret gunner, Sgt. Will.

Sgt. Will’s sole mission is to stop the newly unified Korean Peninsula from taking over Guam and starting a war with the United States. This is communicated in shoddily produced, lazily written—but fortunately brief—cutscenes between each transition to a new area. It’s a weird near-future war fiction that is based on the premise that North and South Korea magically unify under the North’s terms. It’s clearly meant to be an easy premise for the game to allow you to kill thousands of people, but I’ve already talked about the story more than it deserves.

The game will sporadically give you side missions to accomplish such as getting a set number of headshots or avoiding any damage from the cartoonish, Serious Sam-style kamikaze enemies (whose presence is always made known by their constant screaming) that will regularly rush your position. Completing enough of these would grant you temporary bonuses like infinite rockets or invulnerability, but they are almost completely unnecessary. I would ignore them altogether until I’d hear someone shout “Side Mission Failed” over and over again.

It’s hardly worth mentioning that Heavy Fire: Red Shadow looks only slightly better than the WiiWare original, but staring at the bland, undulating waves off the coast of Guam for an hour did nothing to help the already weak package. I had come to accept that the game wouldn’t even be an on-rails tour through a Korean invasion of Guam, but considering they are only modeling four different locations total, I’d have liked the game to at least look better than a 15 year old Time Crisis game.

Honestly, the nicest thing I can say about Heavy Fire: Red Shadow is that it’s over in two hours. It is at least technically playable with some interesting mechanics. But even if you are specifically looking for a wave-based, arcade-style turret game, I’d still stay away. This game offers little of value and is fun only if I stretch that word beyond its absolute limit.

Nathan lives in Colorado catching Pokemon on the Go and at home. He previously spent three months interning for Game Informer before coming back to Gaming Trend to spread the good word on video games. His real passion, though, is collecting different versions of the 3DS and other weird Nintendo garbage. It's a never-ending quest for less space in his house.
Related Articles: Heavy Fire: Red Shadow
Share
Tweet
Share
Submit