Most first person shooter games involve run-and-gun situations, tactical firefights, and a variety of guns, such as assault rifles, SMGs, shotguns, sniper rifles, and more. Even so, there are some games that switch up the formula and offer a new take on gunplay. One such series is the Sniper Elite series, where the typical firefights are replaced with precise, strategic shots and stealth. Sniper Elite 3 Ultimate Edition has made its way to the Nintendo Switch, offering players a chance to take their sniping skills on the go. Even on the go, sniping bad guys never felt so good.

Sniper Elite 3 Ultimate Edition is the complete version of Sniper Elite 3, containing everything from the base game along with some additional missions outside of the campaign. The campaign is broken up into eight missions where you take on a variety of tasks while infiltrating enemy territory. You may be eliminating soldiers in order to steal classified information, sabotaging artillery that is bombarding your comrades, or even just clearing an area of hostiles. No matter the task, your goal is to be as stealthy and precise as possible. 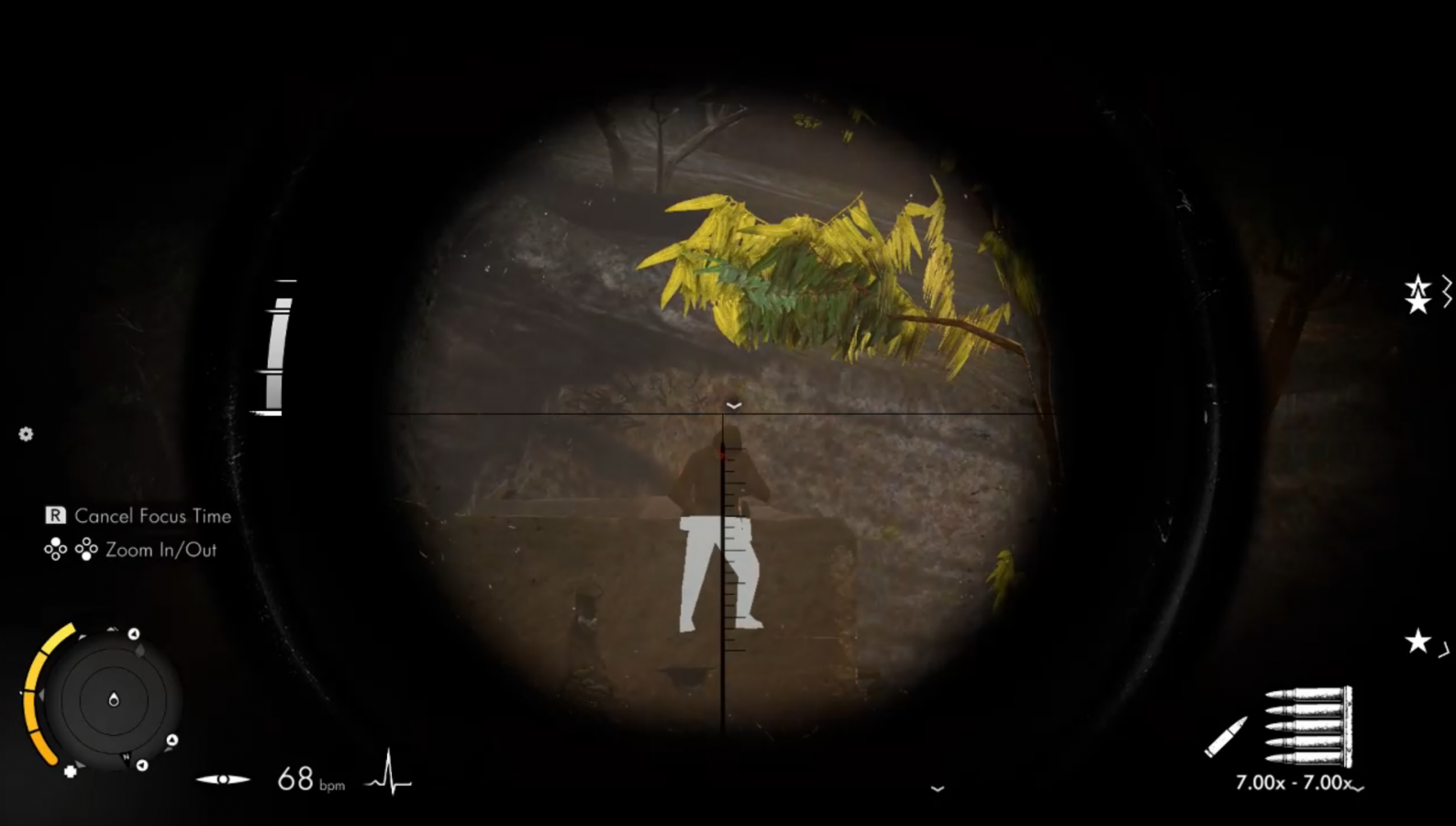 Combat boils down to being as quiet and hidden as possible. Besides sneaking around and sniping enemy soldiers, you can also creep up behind them and kill them with your bare hands. As long as you aren’t seen doing so, you’ll quietly muffle and eliminate your target. It’s a nice way to get rid of a threat without drawing attention to yourself. You can also search their corpse for ammo or other useful tools. If you have time, you should also pick up the body and carry it to somewhere that it won’t be found. If someone sees it, they’ll obviously get concerned and walk over to check it out. Once they realize one of their comrades is dead, they’ll be on alert and start looking for you. For a stealthy sniper, that’s a no-go.

The biggest allure of the game is sniping, so you’ll want to do as much of that as possible. When aiming down sights, you can hold down a button to empty your lungs and focus your shot. This steadies your aim and slows down time for a few moments. A red diamond also appears to indicate where your bullet will hit if you fire. All of these things together make it much easier to line up a shot and explode the skulls of your targets. If it’s a kill shot, you get treated to a cinematic of the bullet launching out of the gun, through the air, and finally into their head. You even get to see an X-ray shot of their head as the bullet destroys its contents. It adds an air of epicness to an already incredible shot. 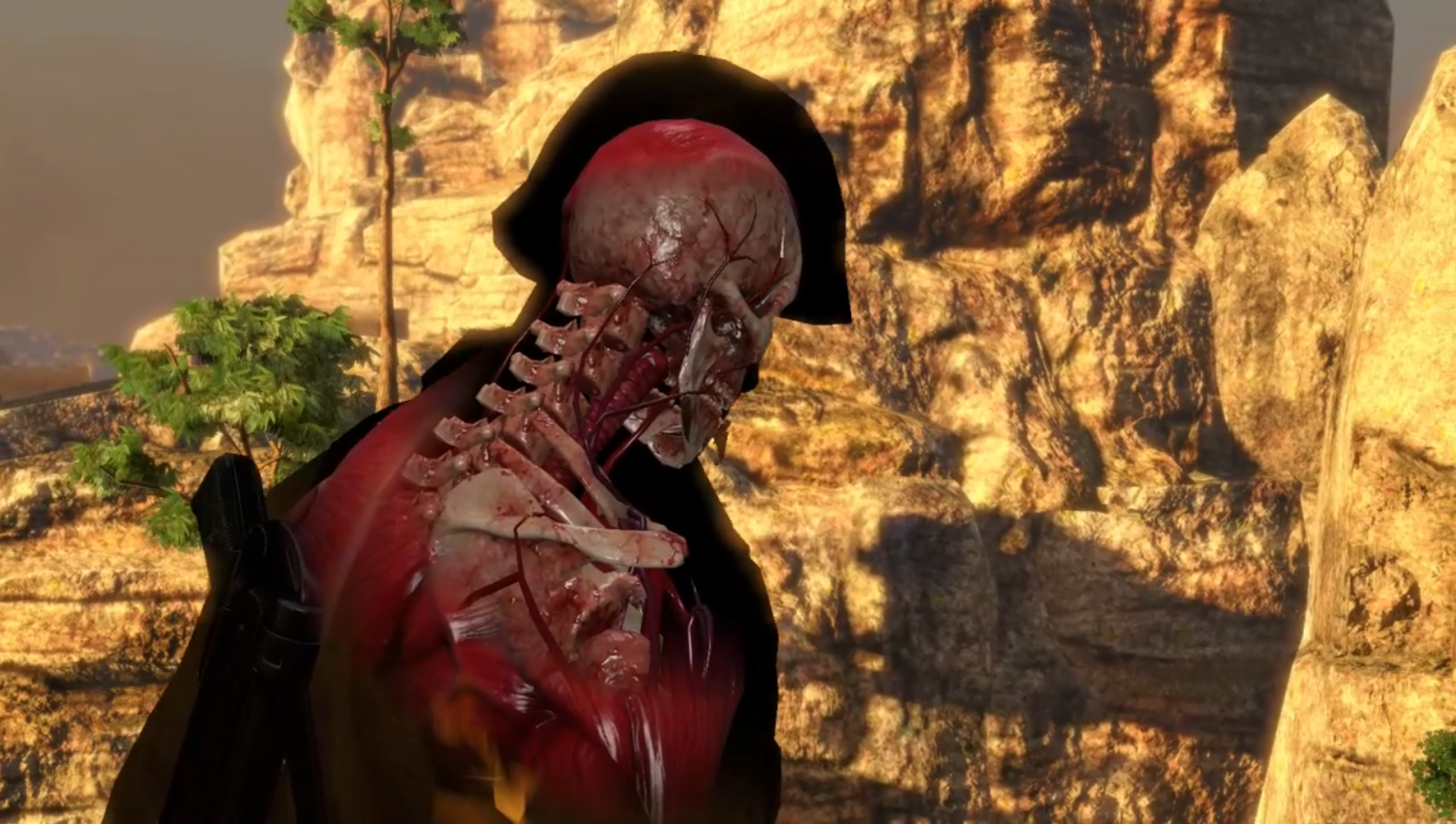 Before doing any of that, you need to lower your heart rate. Your heart rate shows up in the bottom left and it must be at about 60BPM before you can successfully pull off your shot. You can fire before it lowers that much, but it’s harder to hit your mark. Your heart rate raises as you run around, but lowers when you stop or slowly sneak around. The realism is pretty neat and it forces you to move more strategically.

Don’t worry, you aren’t only equipped with a sniper rifle. You also get a silenced pistol for relatively close quarters shots, an SMG for emergency firefights, some medical supplies, and even tools such as land mines and grenades. I used the pistol a lot because it is very helpful, and I’ve also used the SMG more times than I’m proud of. If you nail a headshot, the pistol lets you silently take out someone that’s too far away to be grabbed without being caught. Having a middle-ground between sniping and performing a stealth takedown is incredibly useful. For a sniping game, resorting to close quarters firefights feels wrong. That just means that I need to become a better sniper. Grenades are great for destroying machines if necessary or taking out a group of bad guys if you want to cause some chaos. Land mines are perfect for laying traps or even protecting your backside while you take aim at people from afar. 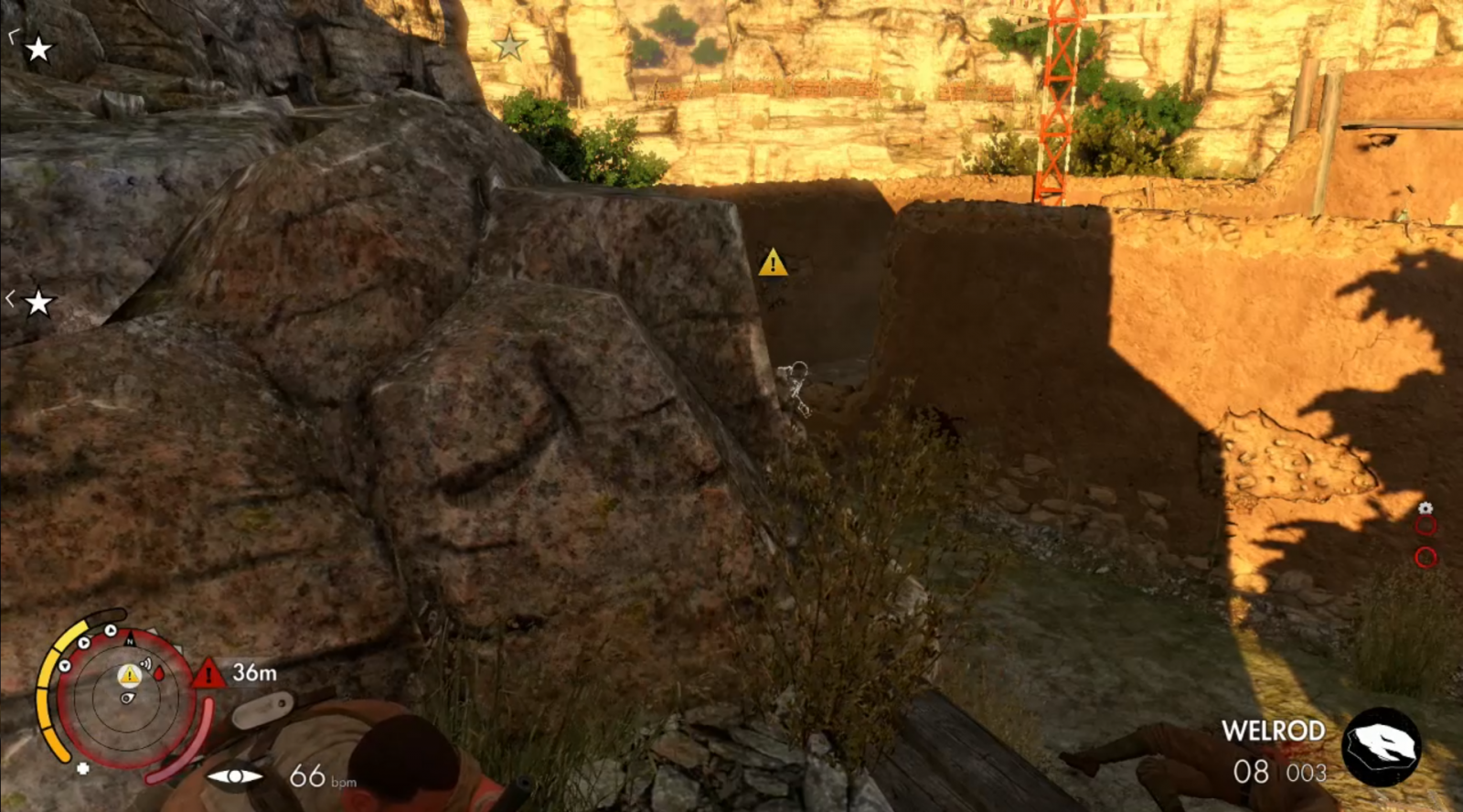 As previously mentioned, you want to be stealthy, and unfortunately your sniper shots aren’t silenced. If you fire a first shot without getting spotted, then you’ll only put the remaining enemies into an alert state. Firing a second shot before the alert goes away will reveal your location to them. Basically, they determine where you are based on the sound of your shots. When you’ve been discovered, a ghost-like version of yourself remains at the last location the enemies found you. This helps you see where the enemies will be rushing to and where you need to get away from. If you successfully escape and wait out the attack or kill everyone who knew of your presence, then you can go back to business as usual. In the end, relocation is important to your survival.

Besides the campaign, you also have four additional missions you can complete, a solo survival mode, co-op modes, and multiplayer. The additional missions are just extra levels that you can prove yourself in. Solo survival sets you in a limited area and challenges you to fight your way through 15 waves of enemies. It’s a nice challenge, but you definitely need to be careful and not get too bold. Co-op lets you take on the campaign or survival mode with a friend, while multiplayer is your standard multiplayer matches. Unfortunately, as of writing this review I haven’t gotten any experience with the co-op or multiplayer modes. I attempted to find other players or servers, but due to the game not being released to the public yet, I had no luck. I had a feeling this would be the case, but it doesn’t hurt to try. Hopefully these modes are as smooth and tactical as the single player modes. 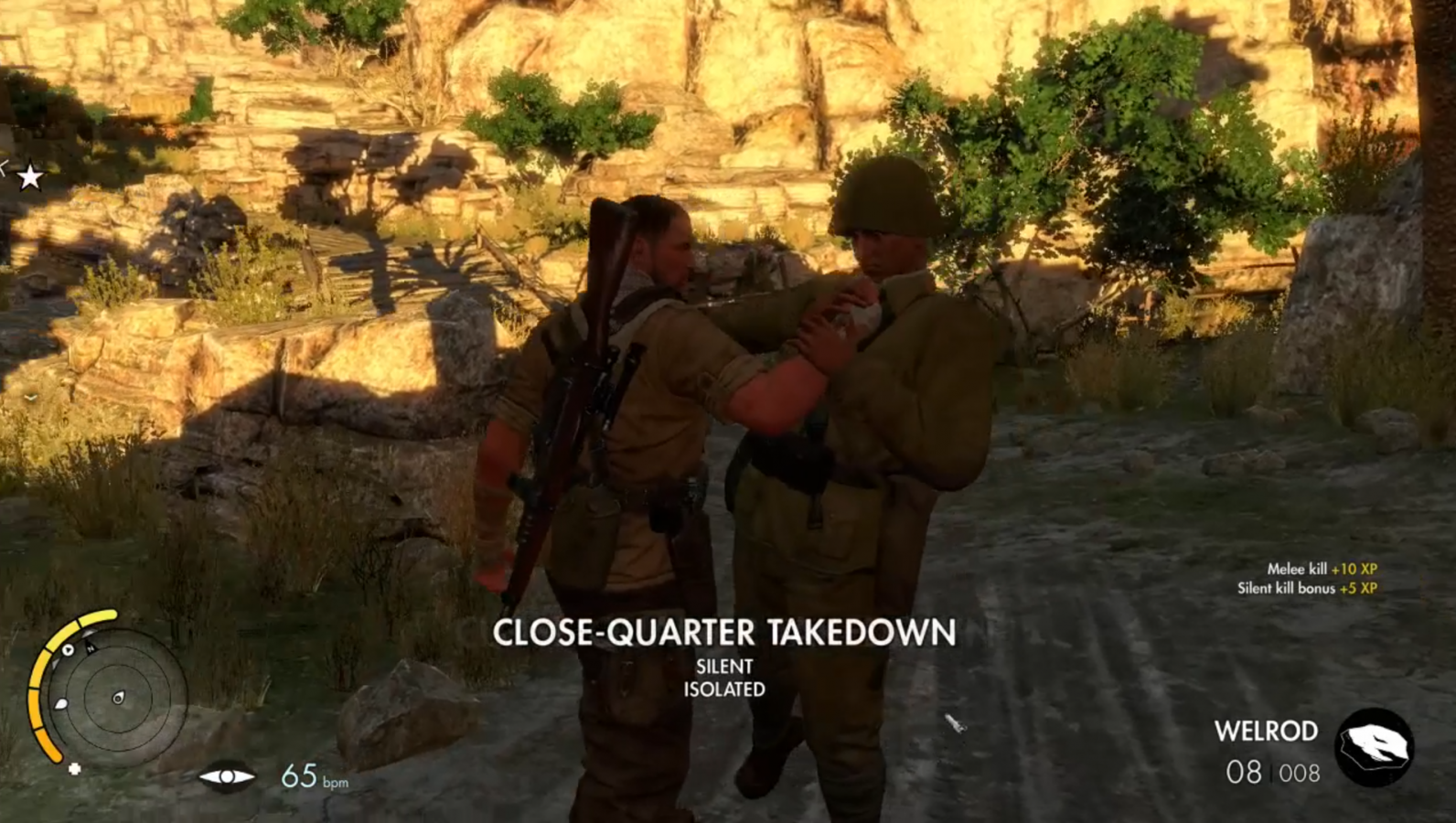 Considering the fact that the game was ported to the Switch, I have to say that the graphics aren’t bad. They aren’t as good as they could be, but ports to the Switch tend to get some sort of graphical downgrade, so it’s not unexpected. It isn’t enough to hurt the game in any way. In terms of difficulty, there’s a good challenge, but it does get frustrating at times. This is either due to small mistakes that you may make as a sniper or due to mission requirements. For example, one mission tasks you with destroying a moving tank with your sniper shots by hitting exhaust vents multiple times. So you not only have to predict the tank’s actions, but also avoid its shots if it sees you, fight off soldiers that may swarm you, and hit the small targets on the tank’s backside. Even so, Sniper Elite 3 Ultimate Edition works pretty well on the Switch. For Switch owners interested in the Sniper Elite series, but never got a chance to try it, this may be your shot.

Sniper Elite 3 Ultimate Edition is a nice port of Sniper Elite 3 with all the DLC included. The gameplay is tactical and requires patience, which may not be for everyone. Some tasks and situations can be frustrating, but you can still have a good time.

Codi loves to play video games and watch movies. He will watch almost any kind of movie just to experience them. His ideas take inspiration from the shows and movies he watches, and games he plays. He also loves a good pun.
Related Articles: Sniper Elite 3 Ultimate Edition
Share
Tweet
Share
Submit