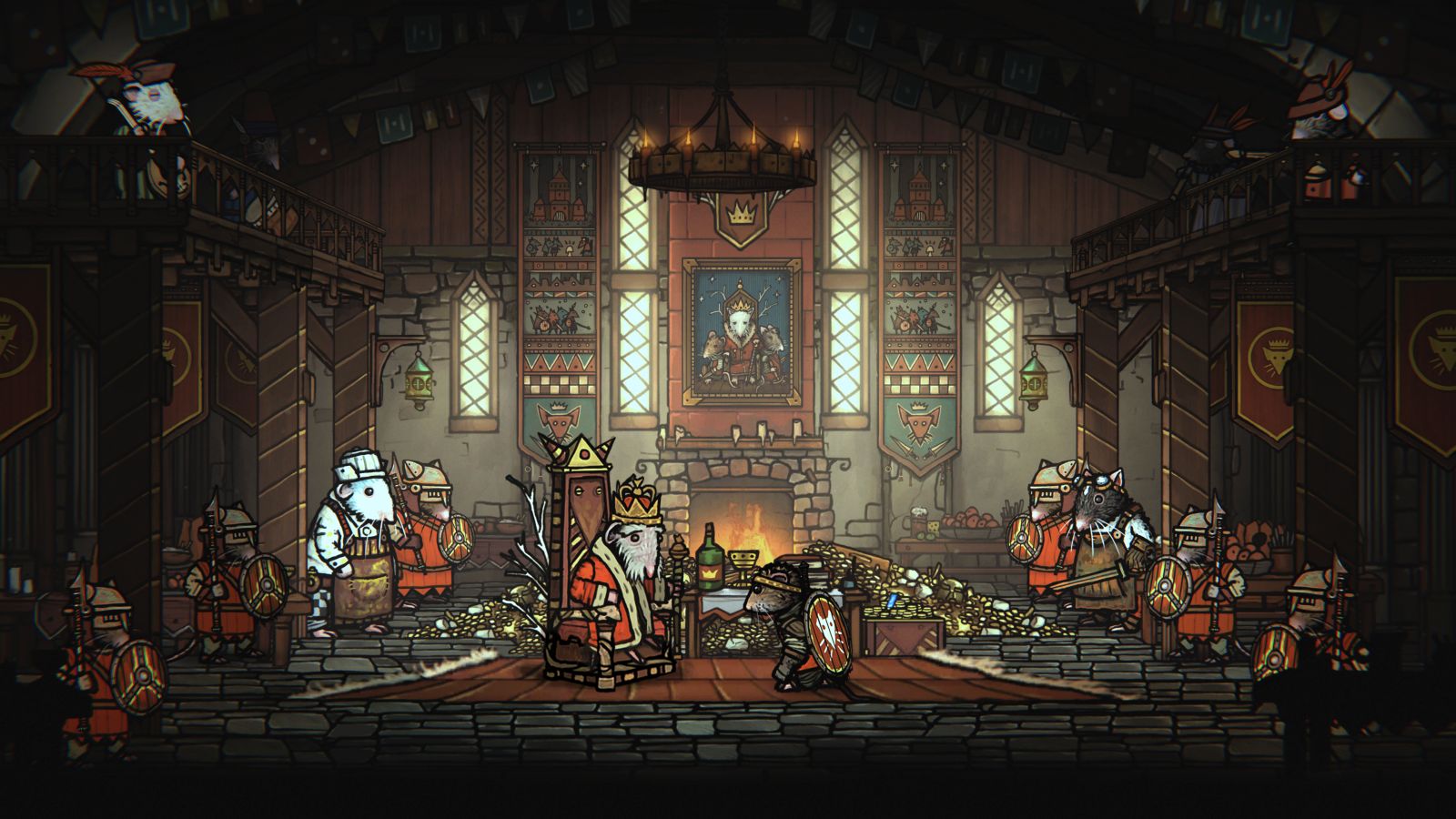 Rats are misunderstood creatures.  Sure, they’ve helped spread some of mankind’s greatest illnesses, but that can’t really be attributed to them. After all, they didn’t do it on purpose. Despite the negative connotations associated with rats, they make great pets. Dan Robinson, Team Leader over at Odd Bug Studios thought as much, so he and his team set to work creating a game where rats were the heroes.  That idea became Tails of Iron, and many of the in-game characters were named after the teams’ pet rats.

Tails of Iron begins in the past, with the rat kingdom nearly decimated due to an ongoing frog invasion. Edging closer to defeat, the rats clung to one last hope – a young monarch, King Rattus. Brave and fiercely loyal to his kingdom, King Rattus united the rat kingdoms and pushed Greenwart, leader of the frogs, into hiding. Peace flourished once again in the kingdom, and King Rattus built a castle worthy of the throne, named the Crimson Keep. Unfortunately, time passed and King Rattus began to grow old and weak. Greenwart, sensing his nemesis’s decline, decided that it was time to come out of hiding and launch a new attack against the Kingdom. King Rattus, aware that his time on the battlefield had long passed, decided to crown a new prince. Redgi, after a fierce competition, won that honor and immediately took to the battlegrounds to save his kingdom, rescue his family, and defeat Greenwart for good. 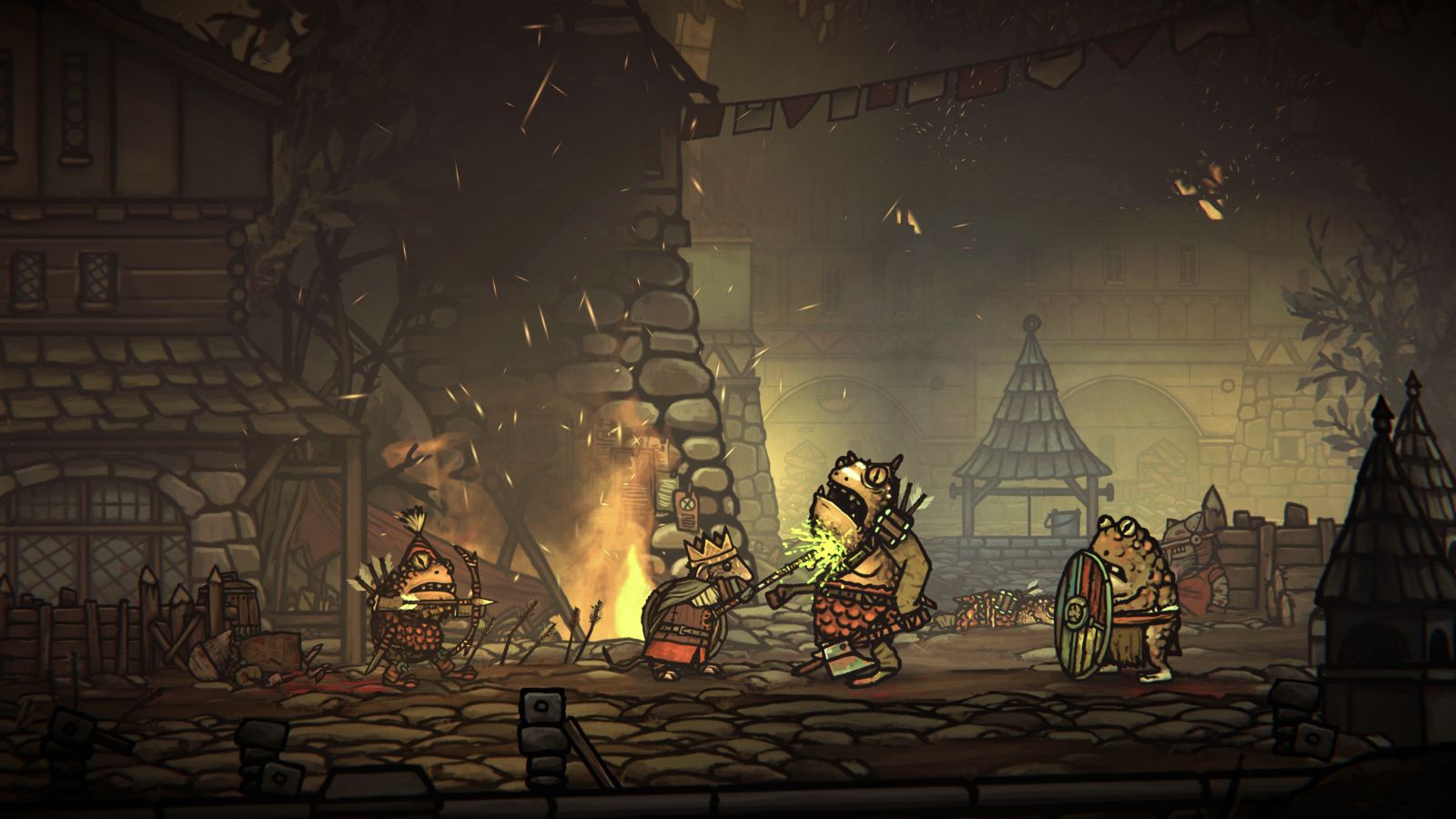 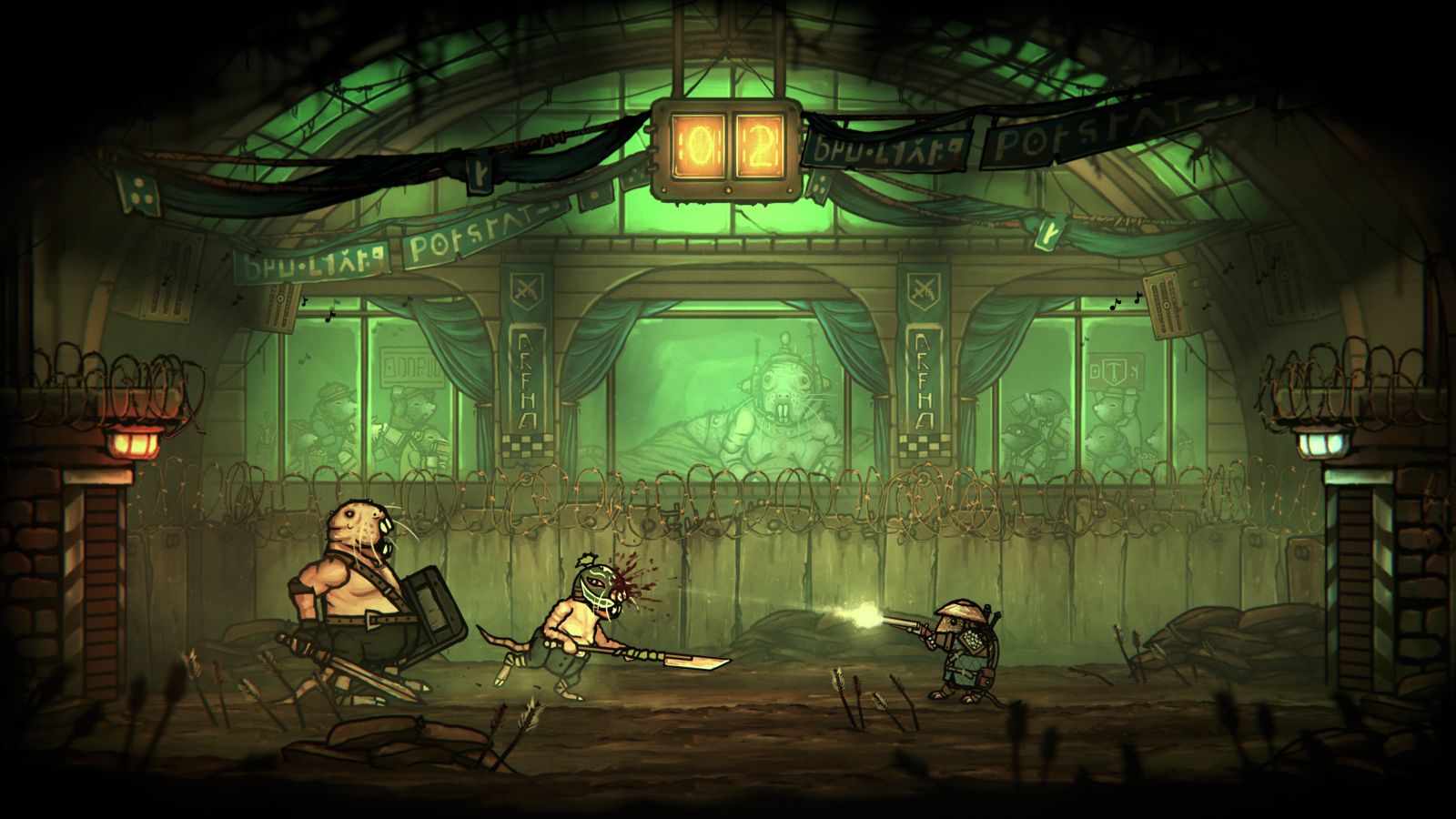 Tails of Iron labels itself as similar to Dark Souls, at least in terms of combat difficulty, and that holds true throughout. But don’t confuse the game as being a souls-like, as the combat is really where the similarity ends. That’s not a negative though; I found the game to be incredibly creative, with a distinct style, and strategic combat. I’m glad they didn’t try to shoehorn in more souls’ mechanics aside from difficulty. Each enemy you meet can kill you, and many will, at least until you learn the intricacies of the combat system.

Enemies hit hard, deal a ton of damage, and have multiple unblockable attacks. Redgi, on the other hand, deals a nominal amount of damage in comparison to enemies – at least until late game. Surviving is contingent on patience, learning attack patterns, knowing when to swing and when to run, and making use of the various items on hand. Early on in a training room you will learn the basics: a red circle over an enemy’s head means they are about to launch an unblockable AOE attack – your only defense is to get out of the way. Red lines around the enemy means an unblockable attack is coming, while white lines mean the attack can be blocked. Yellow lines means you can parry, which involves blocking the attack, throwing the enemy back, and then taking a few stabs as they regain their footing. 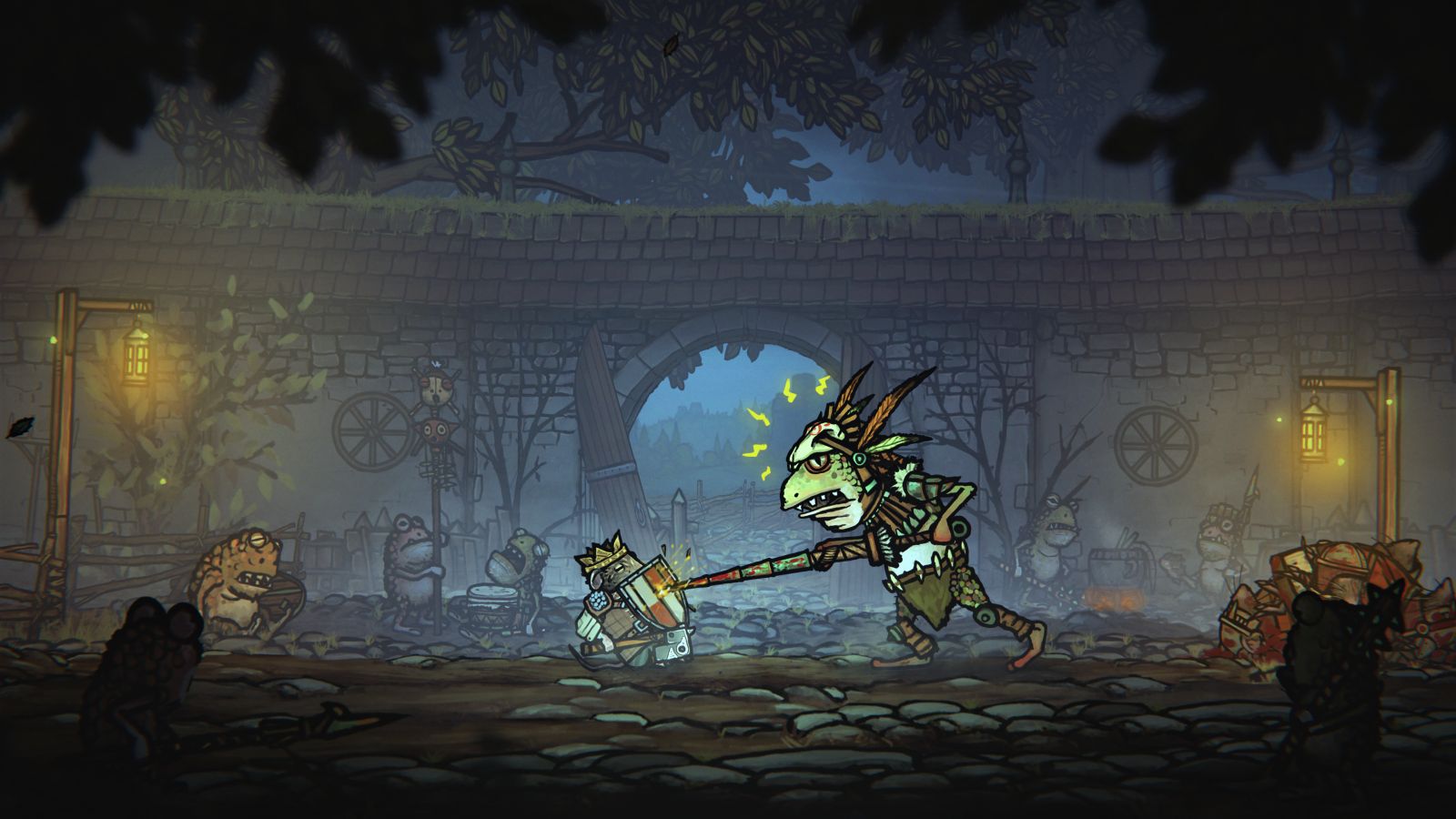 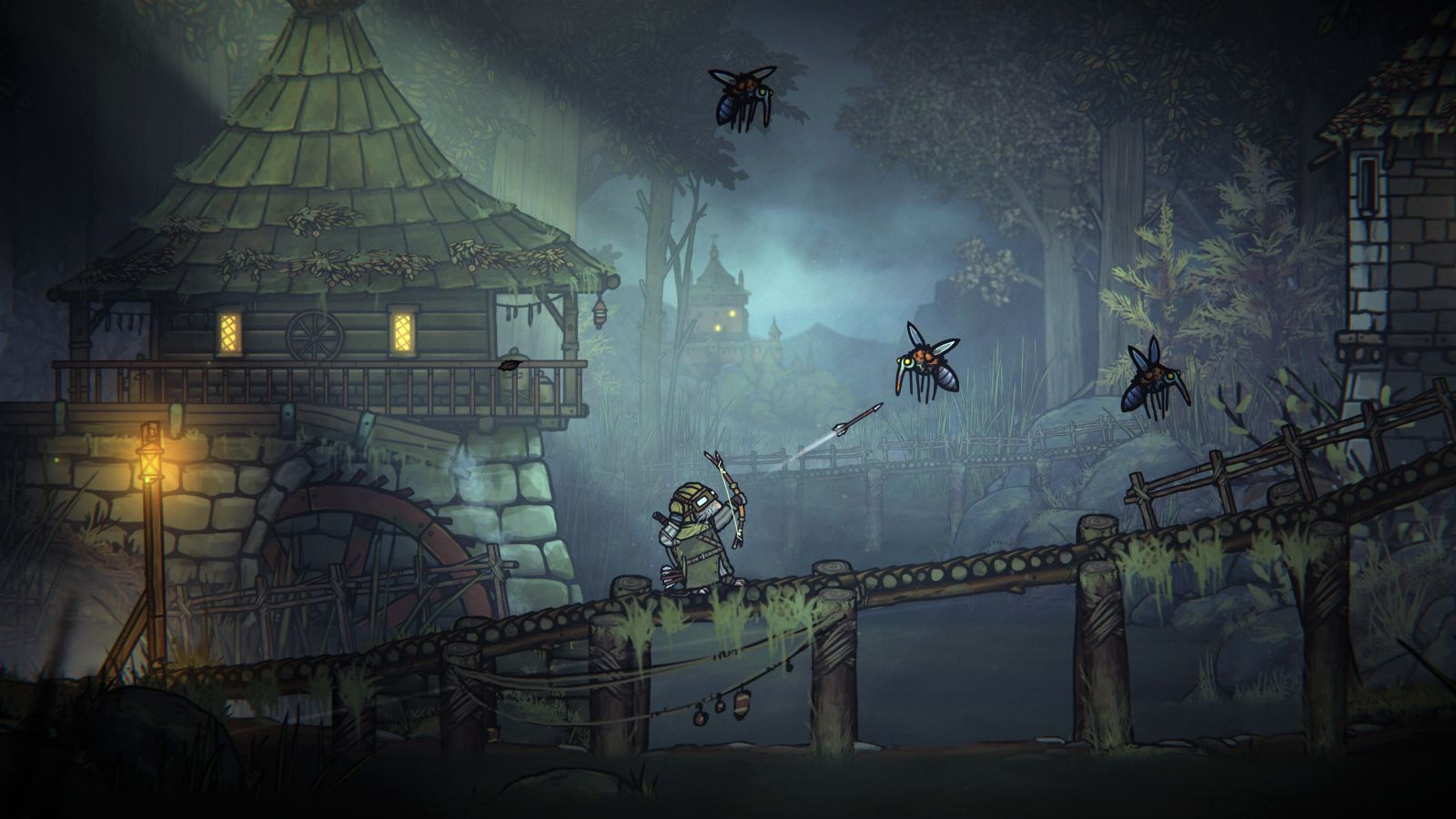 Each enemy has their own attack patterns, and the bosses will almost certainly kill you on your first few attempts as you learn their move set. The color system seems relatively simple to learn, but attacks come at you fast and varied, making it hard to quickly decide the right choice to make. Managing rolling at the right time, parrying when necessary, attacking, blocking, and when to heal during lulls in combat requires a good bit of strategy. It is a system that is at once easily learned, but hard to master. Eventually, multiple enemies will attack at once, even during a few boss fights, meaning you’ll have to keep track of everybody’s patterns. It is quite chaotic, but never unfair.

To help Redgi gain an advantage in fights, you will have poison which can be applied to your blade, a bottle of bug juice, a ranged weapon, a one-handed weapon, a two-handed weapon, shield, armor, and a helmet. Ranged weapons vary in damage output, speed, and capacity – with a simple bow and arrow having the largest ammo capacity, while the crossbow and the gun hold far less but are more deadly.  Your choices for one-handed attacks are either a sword, axe, hammer, or spear. The sword is balanced between speed and damage output, while the axe and hammer are both slow but incredibly powerful, and the spear is extremely quick but deals the least amount of damage. 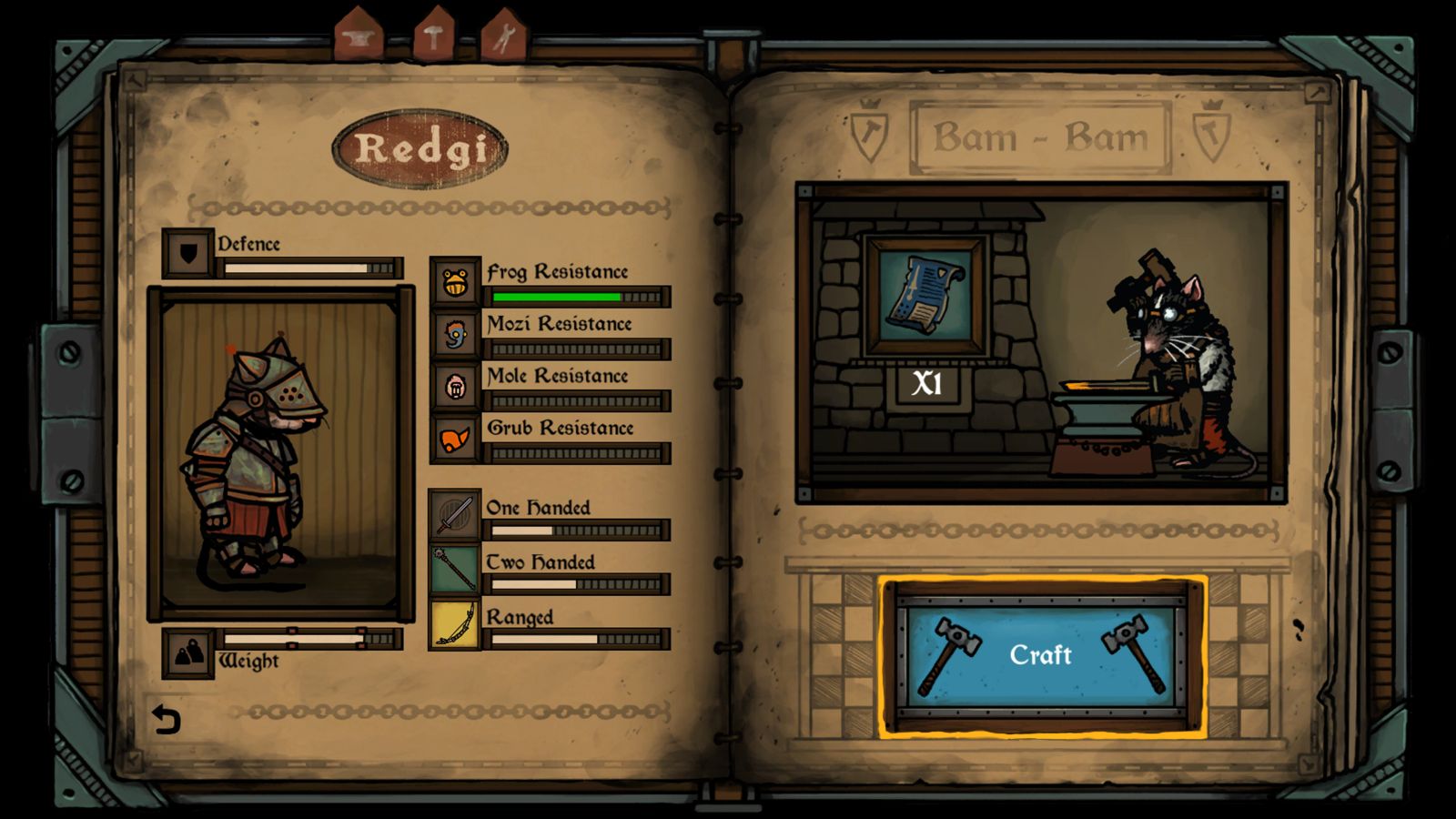 In terms of equipment, you can choose between light, medium, and heavy versions of helmets, armor, and shields. You’ll need to watch your equipment weight, as the more weight you are carrying, the slower your roll is – and the roll is an essential move for survival. Each piece of armor also provides various protection against specific enemies, so you’ll want to change your loadout multiple times as you meet new foes. Bug juice can be refilled from casks or from certain downed enemies, and serve as your only means to heal, while poison can be applied to your weapons to cause enemies to take additional damage from attacks.

When a game presents you with this many customization choices, there’s always a slight fear of choosing the wrong equipment for a fight and being trapped. Thankfully, that is not the case in Tails of Iron, as changing your entire loadout is as simple as finding a storage chest. These are scattered all over the maps, along with an extremely generous save point system. To save, simply sit on a bench – there’s one in nearly every section of the game so backtracking is rarely necessary. Many areas feature a save bench, storage chest, and refills for your arrows, poison, and health, making these great spots to test out different builds against the tougher enemies with little punishment if you die. 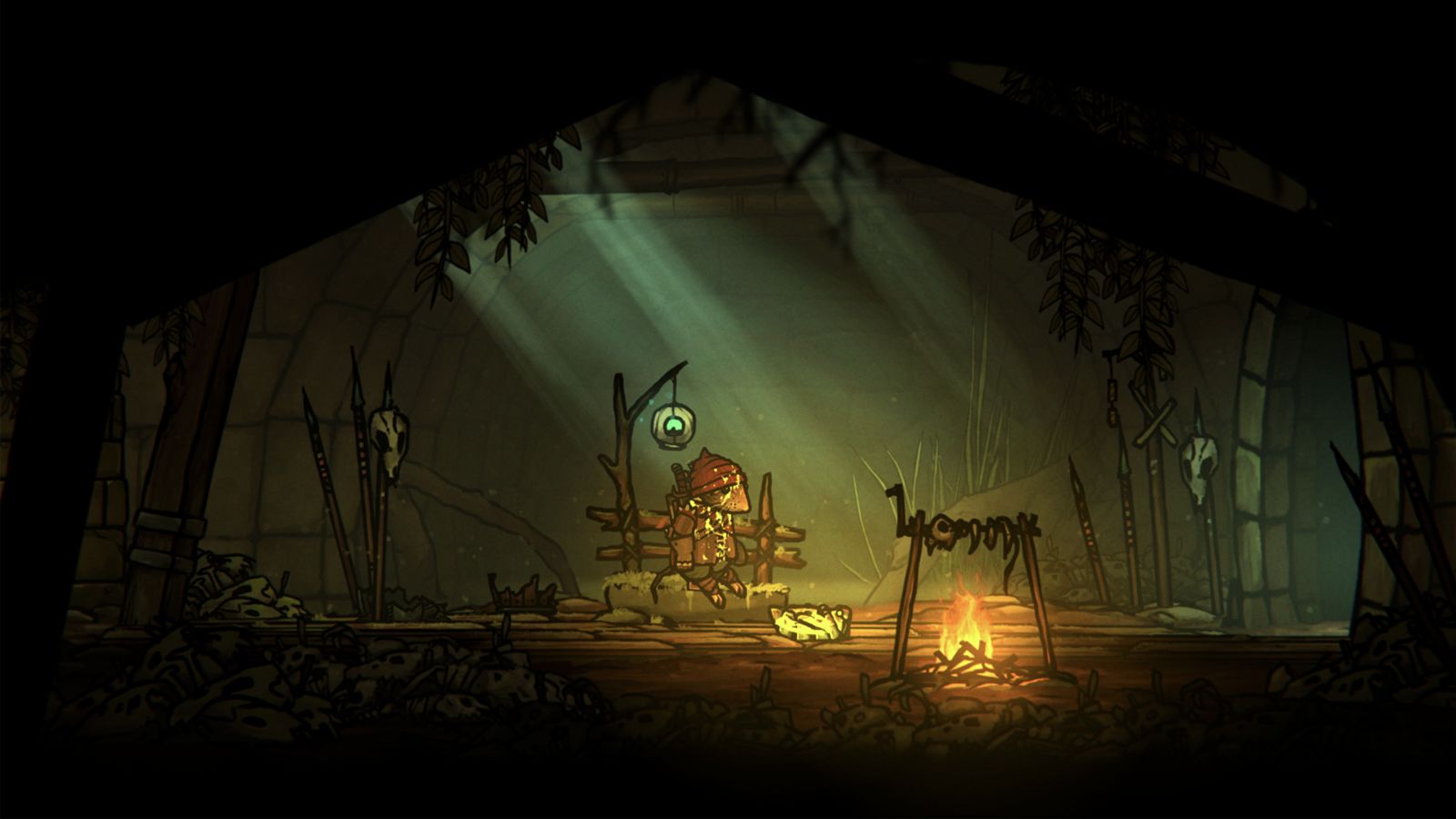 I appreciated the generous save system as it balanced out the extreme difficulty. As much as I enjoy the Souls series, sometimes it is frustrating to die, only to have to fight your way through five minutes of enemies just to reach the boss again. In Tails of Iron, that rarely happens. Almost always you’ll only be a room or two away from the boss, able to quickly switch out your gear and hop back into the fray. This will make many players far more likely to try out new gear and to not become frustrated at a particularly challenging part, as the punishment for death is only a few seconds of load time. It also helps that those deaths never feel cheap – if I died, I knew it was due to my impatience or lack of attention, which only pushed me to do better on my next attempt.

Many players will ultimately struggle early on, but take the time to explore, purchase blueprints, tackle any chances to help NPCs, and be sure to take on any side missions you encounter, and you’ll eventually find gear that suits your playstyle. There are hidden boss fights you can stumble upon, and multiple secret areas with new gear or items necessary to complete achievements or side missions. Many of these secrets will in no way impact your playthrough if you avoid them, and are merely there to add more meat to the game. Various NPCs you’ll encounter in the towns you save will ask for help in return for granting you with special items, some NPCs will have valuable items they can sell you at specific points in the game, and boards throughout the towns you visit will list any side quests that you can tackle. Some side quests are necessary to gain the gold needed to rebuild your kingdom or to purchase a specific item to progress, but a few are there solely for your enjoyment. 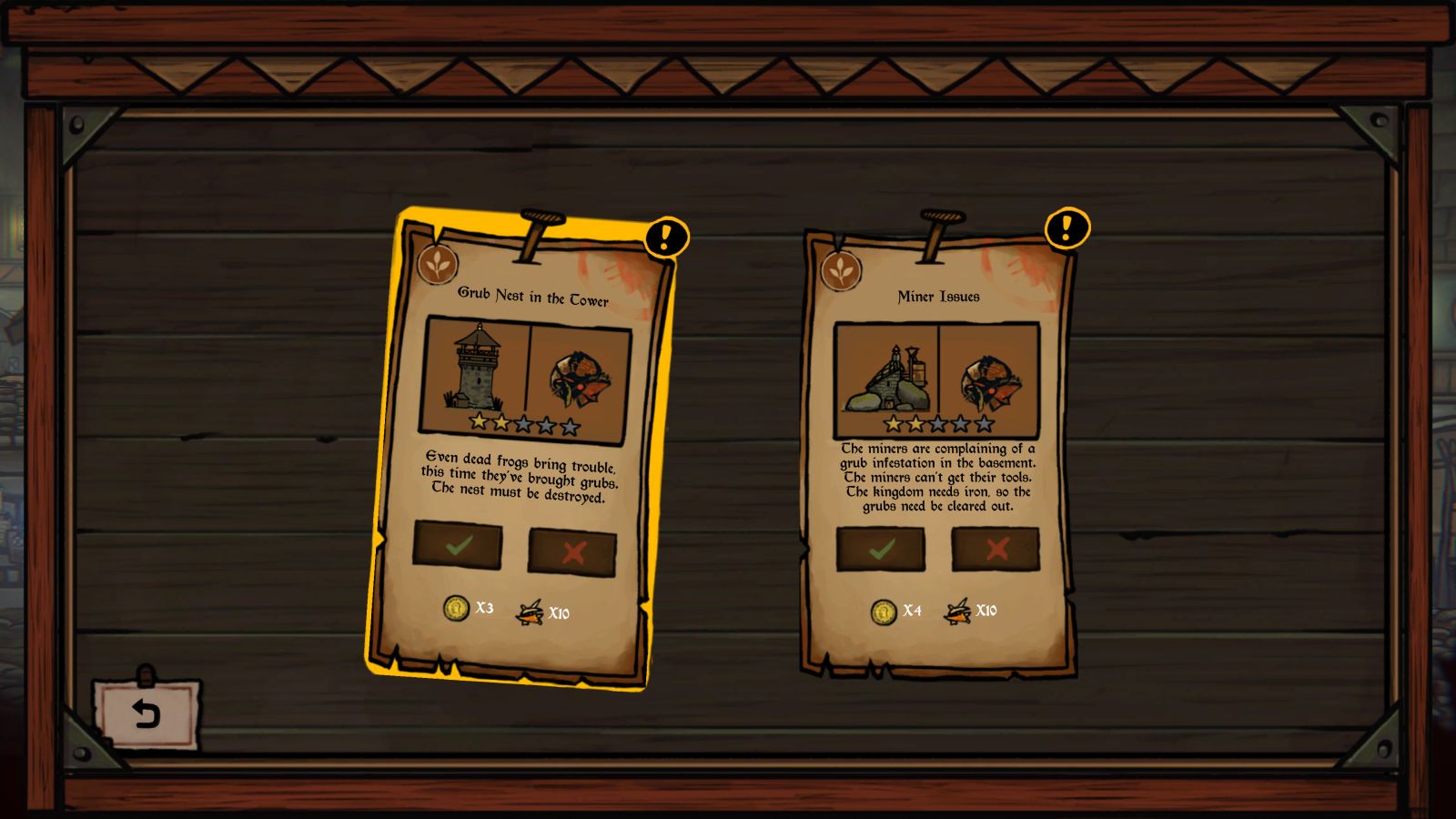 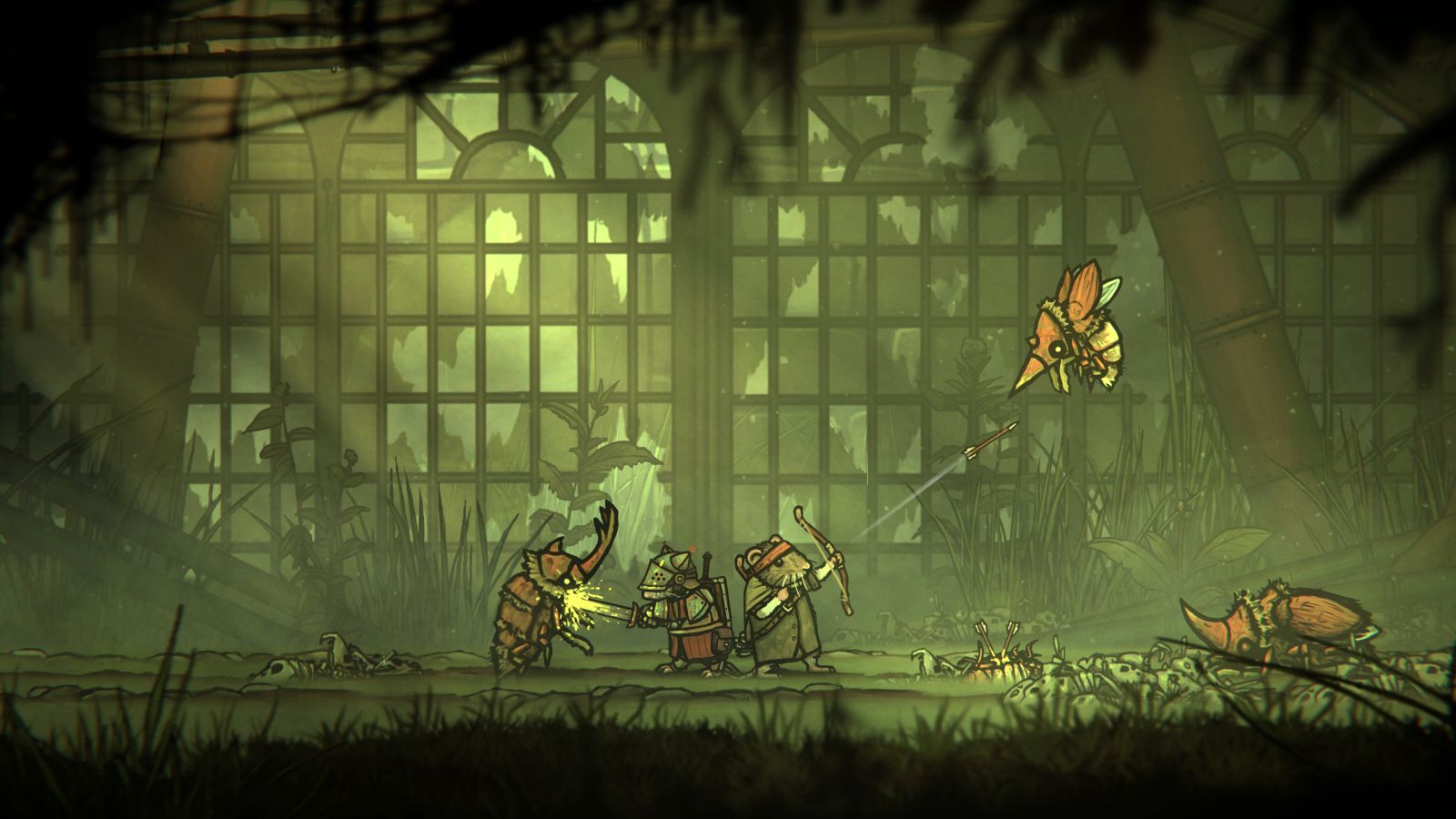 As you progress, the towns you visit and your own kingdom will slowly rebuild. Your kingdom rebuilds by you rescuing your brothers, a blacksmith and a chef, and then rebuilding their kitchen and workshop, before rebuilding the rest of the castle. The chef will use ingredients you find to provide you with permanent health upgrades, while the blacksmith will craft new weapons and armor for your use. Anytime you stumble upon or craft a new piece of equipment you have the option to store it or immediately equip it, but there is no option to hang on to any unequipped items in case mid-fight you would like to switch loadouts. So plan accordingly.

At any time you can check out a map of the area you are in, and see where you’ve explored, what has yet to be searched, and where points of interest are. This helps for completionists, like me, to search every nook and cranny, while also being sure that I am never far from the items I need to stay fully stocked. It is a welcome addition. 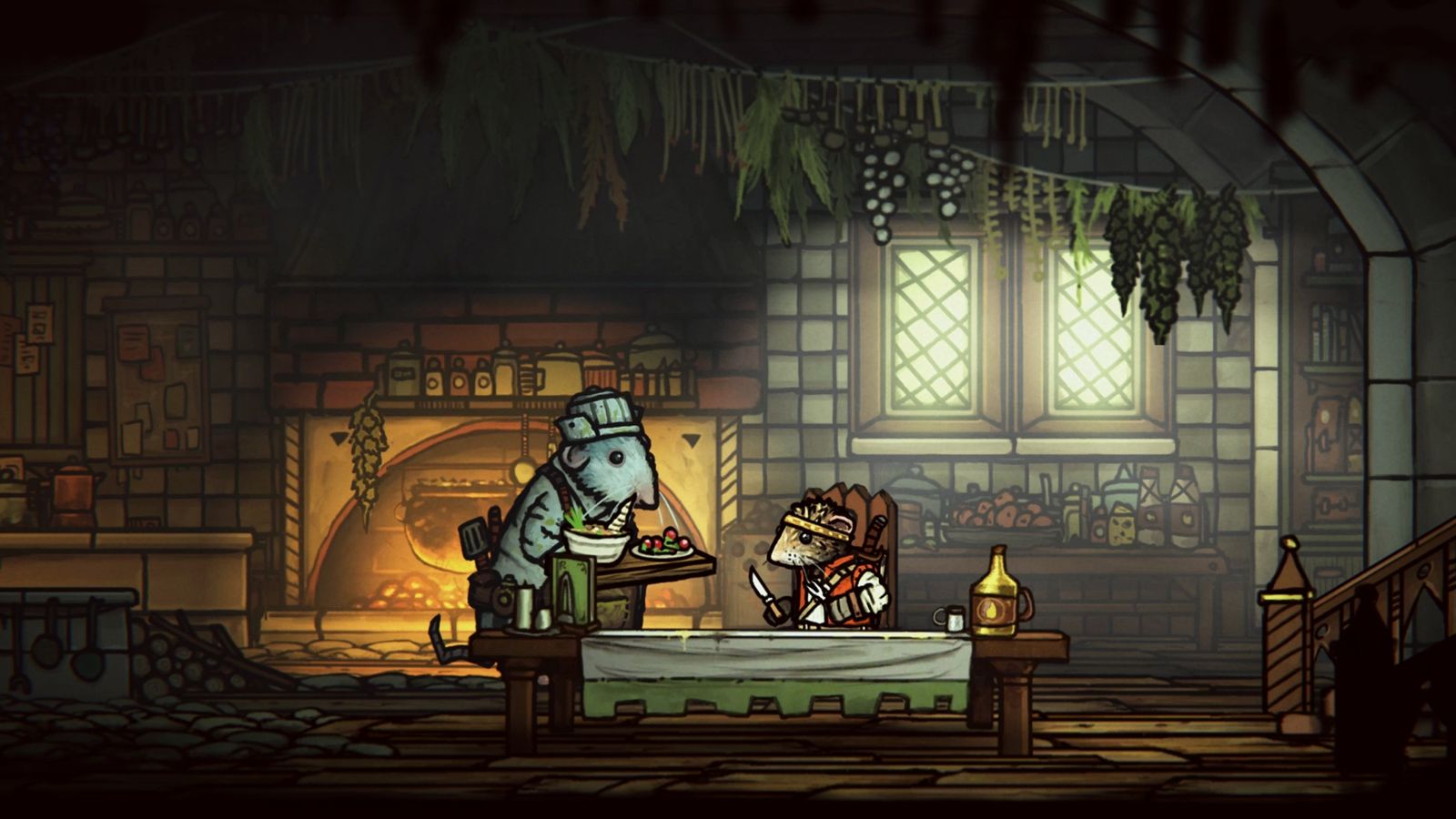 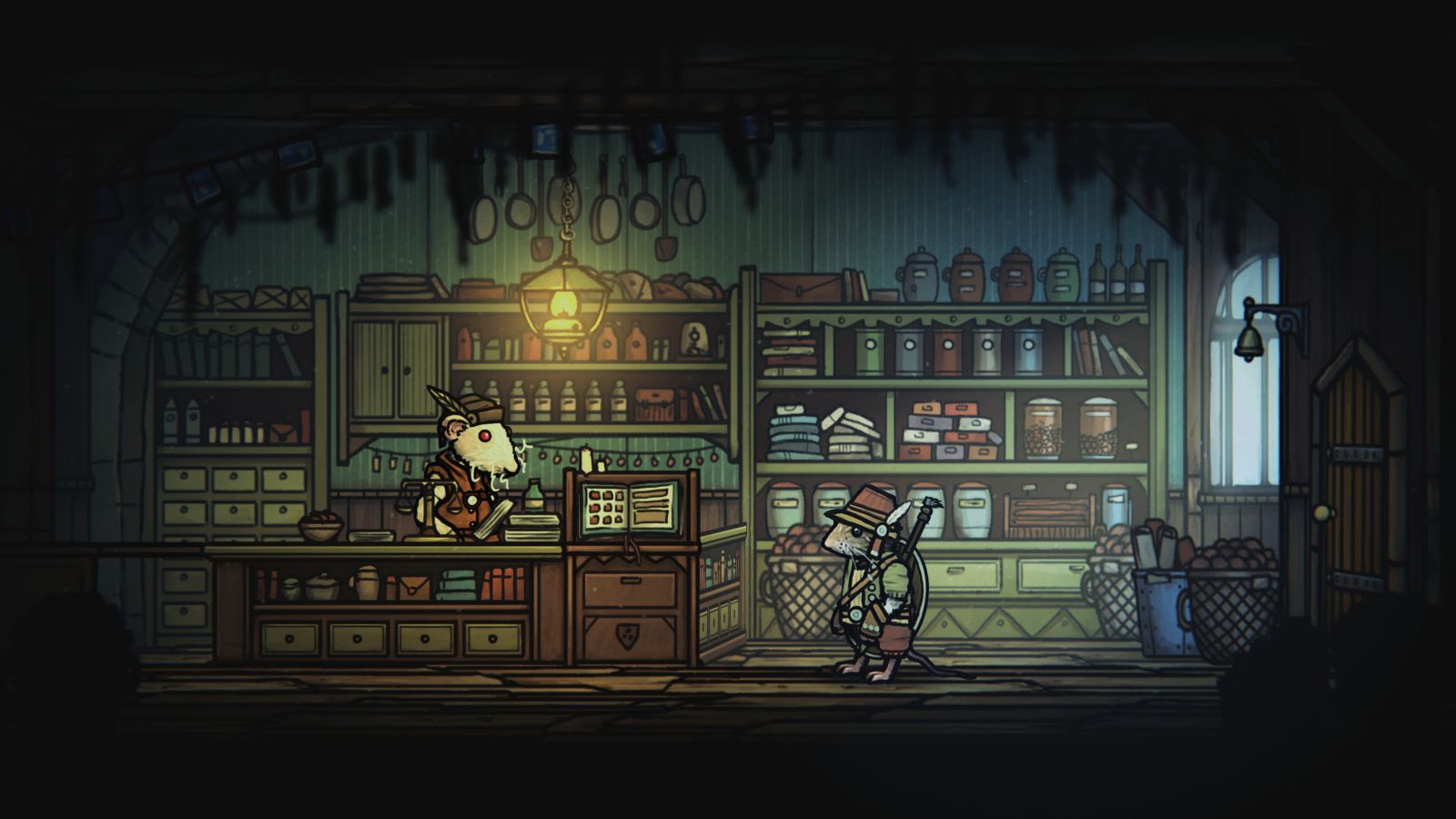 To speak of Tails of Iron without giving credit to its art style would be criminal. The game is a cute, yet bloody mixture of 2D/3D levels, with the immediate foreground being where the action takes place, but impressive backgrounds will often show you what is happening behind the scenes, or even show enemies on their way to your location. The rats are adorably ferocious, at once charming and deadly; while the frogs are incredibly detailed and deadly. Frogs are covered in scars and other battle wounds, making them appear as formidable, battle-weary foes.

You’ll encounter many characters during your journey, none of which are voiced. Instead, all in-game dialogue is told through pictures, but easily conveys your next task. Despite their lack of dialogue, the characters are still endearing – a huge testament to Odd Bug Studio’s story and character design. During times when more information is necessary, it is provided by Doug Cockle, a.k.a. Geralt of Rivia from The Witcher, who takes on the role of the narrator. 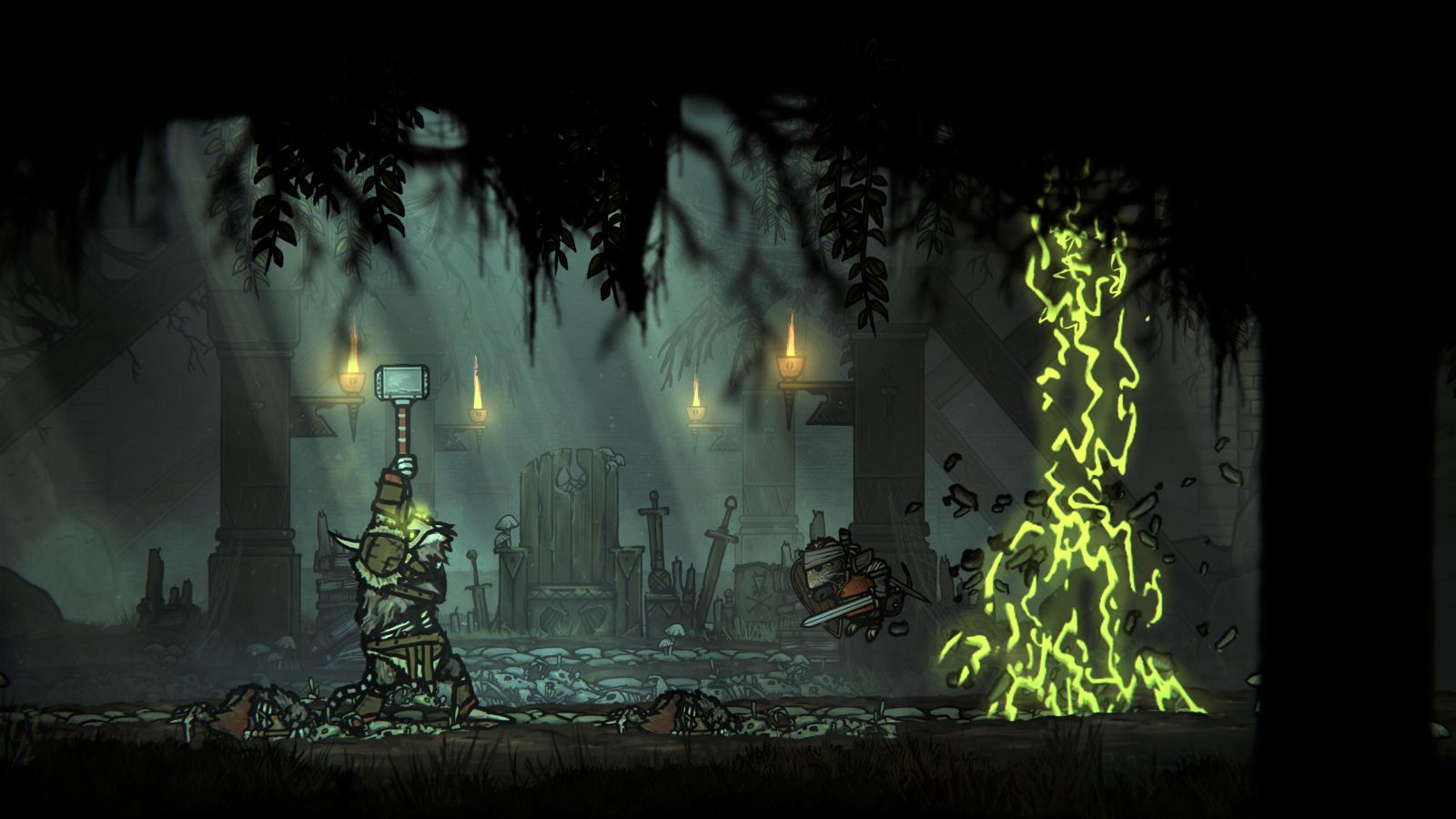 I only wish that Tails of Iron was longer, as my playthrough was complete in about 9 hours, and that was with my many deaths and getting the platinum trophy. Of course, players’ mileage will vary depending on how good they are at combat, as boss fights are frequent and relentless, with players being unable to progress until they overcome their enemy. For those who love more challenges, there is an arena in a late area which provides you with unlimited fighting opportunities.

Tails of Iron is a fantastic, brutal, and gorgeous game. Placing rats at the forefront of an adventure game was a bold move, and serves the world that Odd Bug Studio has created immensely. The battle between the frogs and rats is intense, the combat is challenging - yet fair - and the wide variety of equipment is sure to make any RPG fan excited to experiment with new loadouts. I enjoyed every moment spent in the Rat Kingdom, and can only hope to see more from Redgi, his brothers, and this fantastic world.

Richard Allen is a freelance writer and contributing editor for various publications. When not writing for Gaming Trend you can find him covering theatre for Broadway World, movies and TV for Fandomize, or working on original stories. An avid retro gamer, he is overly obsessed with Dragon's Lair. Chat with him via @thricetheartist on Twitter and @richardallenwrites on Facebook and Instagram.
Related Articles: Tails of Iron
Share
Tweet
Share
Submit