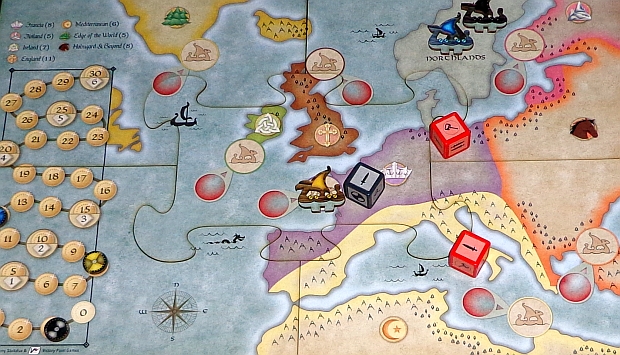 Victory Point Games has impressed me again. Following the release of Villainous Vikings in August, and the subsequent series of negative reviews which fell like hammers, VPG suspended release of the game. And then they fixed it. I have never heard of a game company pulling a release so quickly, openly admitting mistakes were made, and then responding promptly and comprehensively to all the complaints. This demonstrates two things. First, the gaming community really liked the premise of the game and many aspects of the original product, and gave honest feedback encouraging improved execution. Second, Victory Point Games isn’t out just to turn inventory; they are in business for the right reasons – to create reasonably-priced games with compelling themes and solid mechanics. This collaboration between the company and the community is truly extraordinary.

Having already written a review of this game, I decided not to recite the common elements. Check out more screenshots and my original review here: Villainous Vikings. This review focuses on the key aspects of the game and the improvements made for the 2nd Edition.

The instruction manual has better flow, and all the rules are thoroughly explained. Throughout the booklet, pictures and examples illustrate game situations. A handy summary of turn actions, combat, and the costs associated with maintaining a Viking longboat are conveniently located on the back page of the manual.

VPG managed to stuff a big game scope inside that little red box – players will not be wanting for things to do on their turn. In addition to sailing the known world, Viking Captains may Trade, Raid, or Attack settlements, from sea-side villages to regional capitals like Dublin, Constantinople, or Paris (funny to think of a longboat of unruly Vikings pleasure-cruising up the Seine on their way to topple Charlemagne). In this edition, combat against fellow Captains is encouraged, and it is even possible to attack locations already conquered by other players. Trade is fixed as well. Gone is the clunky mechanic to buy the allegiance of a Location, and improved game balance requires players to occasionally make peaceful landfall to repair their ships and hire mercenaries.

Speaking of combat, the revised game has teeth! The five Sovereigns (previously referred to as “bosses”) are the equal of any Viking Captain. I laughed out loud when I saw the Emperor Basil card. He can assail your puny Viking longboat with as many as 15 swords! Good luck against that kind of firepower. And then there’s the Sultan of Cordoba, whose static ability automatically destroys a longboat section before the battle! And what of Charlemagne, you ask? His static ability negates all Viking Heathen Hammer effects. Great job, Victory Point Games – you nailed it.

While it is still possible for a player to take on a regional Capital and Sovereign in the first age and win, the cost will be steep in terms of damaged ship segments. Assuming the player is victorious, he must then decide whether to Conquer or Raze the Capital. Conquering is worth victory points, but only if he can protect or rebuild it if enemy Captains try to Raid. Risk-reward, my primary issue with the original version, is now very well balanced, forcing players to make tough decisions throughout the game. It is no longer a given that players will collect Location cards every turn. Given the added complexity and balance, Villainous Vikings has graduated from light-weight to medium-weight game.

Overall, the improvements to Villainous Vikings are significant and impact all aspects of the game. The components look much better, receiving more paint to distinguish player longships and gold counters. All of the cards feature additional graphics and color depth, and the introduction of blue to the palette makes all the visuals more dramatic. This is most evident on the gameboard, which looks fully realized, as opposed the the original board which felt like a beta test.

Almost no sore spots remain. I would have been tempted to score the game a perfect 100 if VPG would have figured out something better to do with Ragnarok. Another lingering complaint is that you’ll still have to apply all those darn stickers to the dice. Oh well, go get a cold one and sit down in front of the TV for half an hour and the chore is done.

I can’t recommend this highly enough. The game is visually and mechanically compelling, finally living up to the rich and vibrant thematic elements. Hobbyists will love Villainous Vikings, and it is just the sort of game that can inspire young people to a lifelong interest in serious board games.

Mechanics: Strategy Card and Board Game

The 2nd edition resolves almost all the issues from the original, finally combining dramatic gameplay with an appropriate amount of complexity and compelling theme. Highly recommended for hobbyists and casual gamers alike.