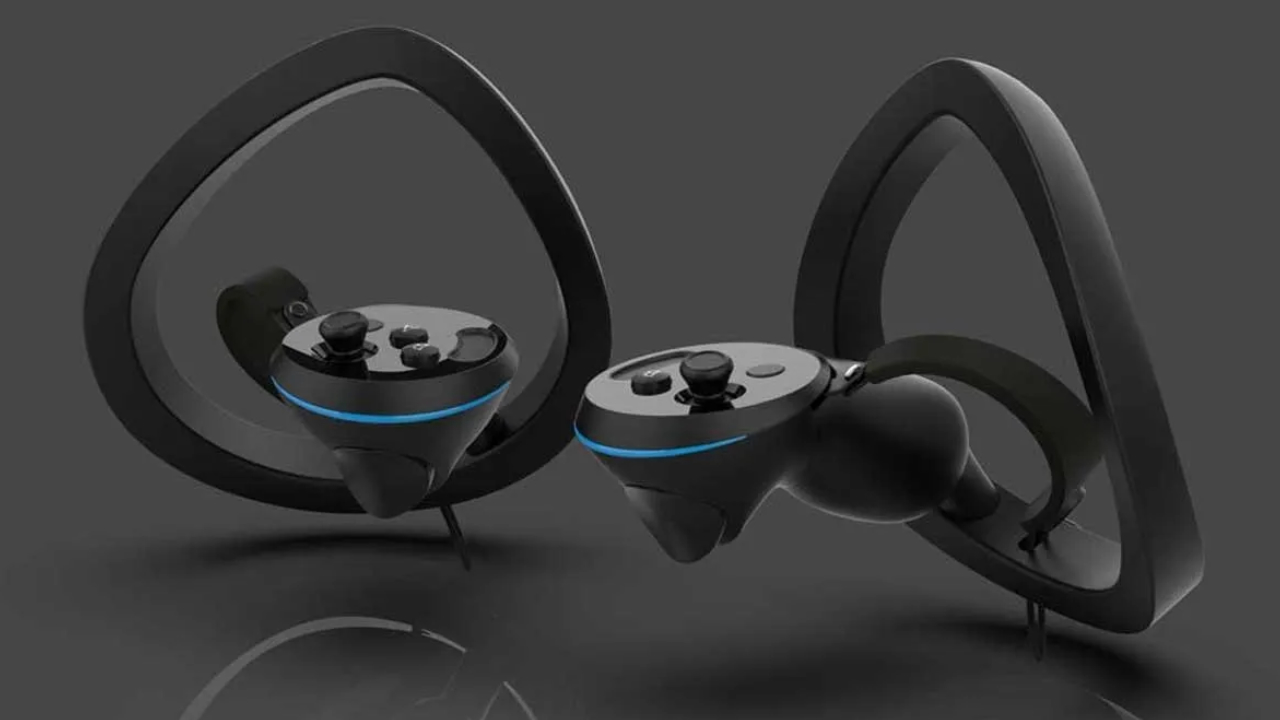 There are a lot of options when it comes to VR headsets, with manufacturers like HP, HTC, Samsung, Facebook, Sony, Pimax, and even ones you might not have heard of like Varjo. The key differentiators on these headsets are resolution, refresh rate, battery life, and comfort, but other than the Oculus headset which uses a proprietary controller, your choices are few when it comes to controllers. The HTC Vive wands that shipped with the earliest headsets were decent enough, but they were also bulky and had non-replaceable batteries – mine hold about half the charge they had at launch. A few other companies have made minor tweaks on the formula, but none of them have been able to dethrone Valve’s Index controller. Well, Pimax is looking to challenge their supremacy with their brand new Sword controllers. Could this be the new controller to carry us into the next generation of virtual reality? Let’s find out.

You can’t review the Pimax Sword Controller without comparing it directly to the Index as there’s simply nothing else out there that has a similar feature set. As such, expect that much of this writeup will be head-to-head, calling out both similarities and differences throughout.

Ergonomically, the devices feel very similar, featuring a near-identical wrist strap system, with one minor difference. Closest to the center of the Valve Index is an adjustment bar that you can press in to lock it into four positions. On the Sword this is replaced with a spring-tensioned system that keeps the strap tight against your hand. As a result, if you have a hand size that lies in between those four set positions, you’ll appreciate the Sword as it will feel more secure. At the bottom of the Sword and Index is an elastic strap that you can pull with your other hand to lock it in place, with a small release button to free your hand when you are done playing. They may be in slightly different positions, but both do the job. The biggest difference, however, comes from how it feels in your hands.

The Vive’s original controller felt like a huge wand with a large circle up top. The Index changed things by making it strap to your hand in a way where you don’t have to constantly grip it, though it still feels like you are holding a curved-hilt light taber like Count Dooku’s from Star Wars, or a hand-and-a-half sword (aka “Bastard sword”). The Sword controller, on the other hand, feels more like a single handed traditional sword. More than that, it has more in common with the Oculus Quest 2’s smaller controllers in terms of size and shape. This is where you’ll notice a few of the largest departure’s from Valve’s controller. 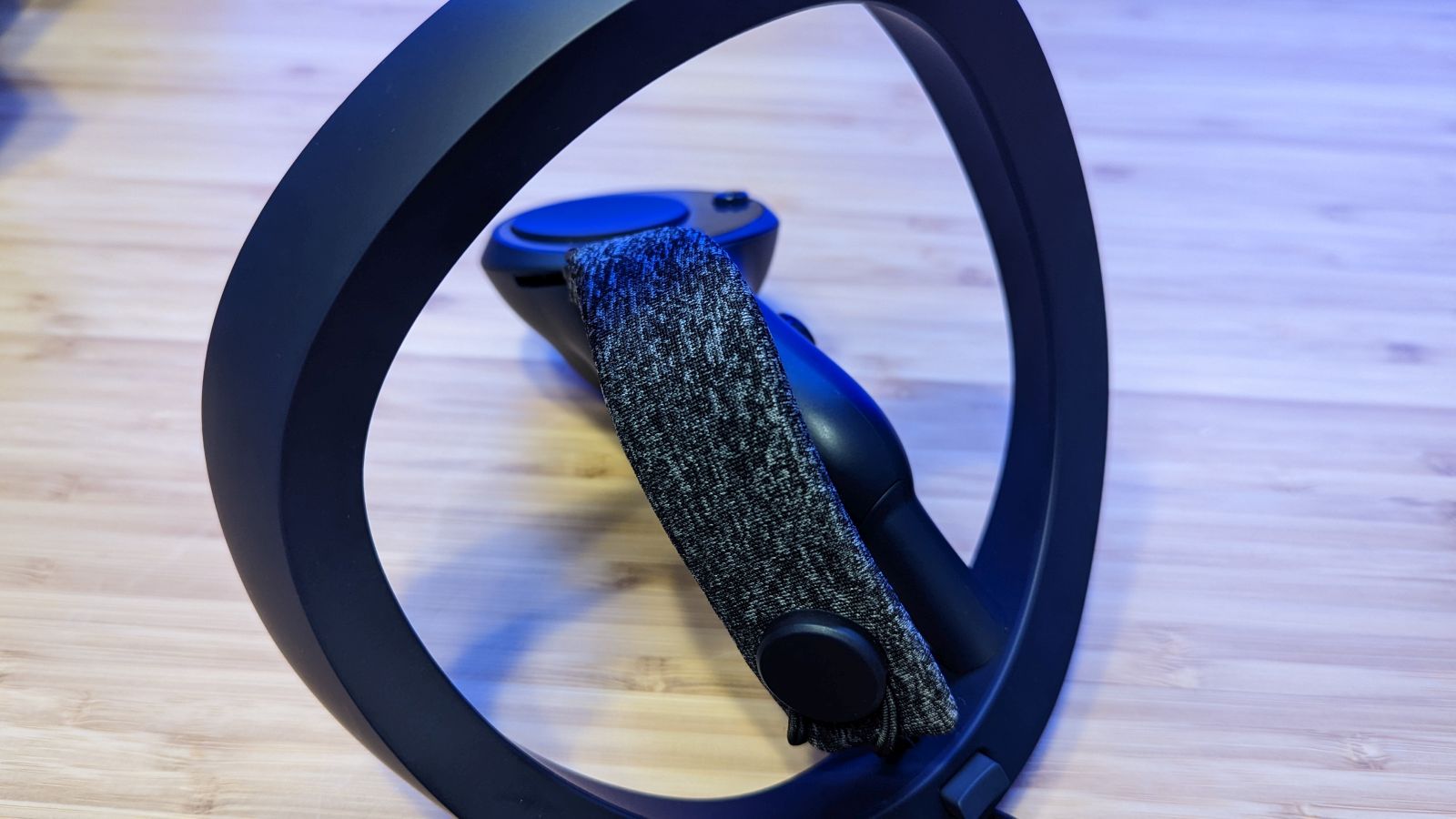 Nearly every controller on the market has a thumbstick, but Pimax has replaced this with a large trackpad. Next, they’ve relocated the second button down to the middle finger on the grip. Ergonomically it makes sense as you can keep your fingers in position without having to move to actuate them, but track pads have been problematic in the past – we’ll get back to this in the testing portion of this review.

It’d be impossible to miss the last major physical differences between the Sword and the Index controllers. On the Index, the outside edge of the controller is protected by a large protective half circle shape. This prevents damage to the controller or the user if you were to overswing and smack a wall. The Sword controller kicks this up a notch with a circle that encompasses the entire device, but around the wrist as well. After several thousand hours of VR hand waving, I can say I’ve certainly smacked my wrist more frequently than my hand so I appreciate this change. In terms of buttons, both have a similar pressure feel, including the triggers. 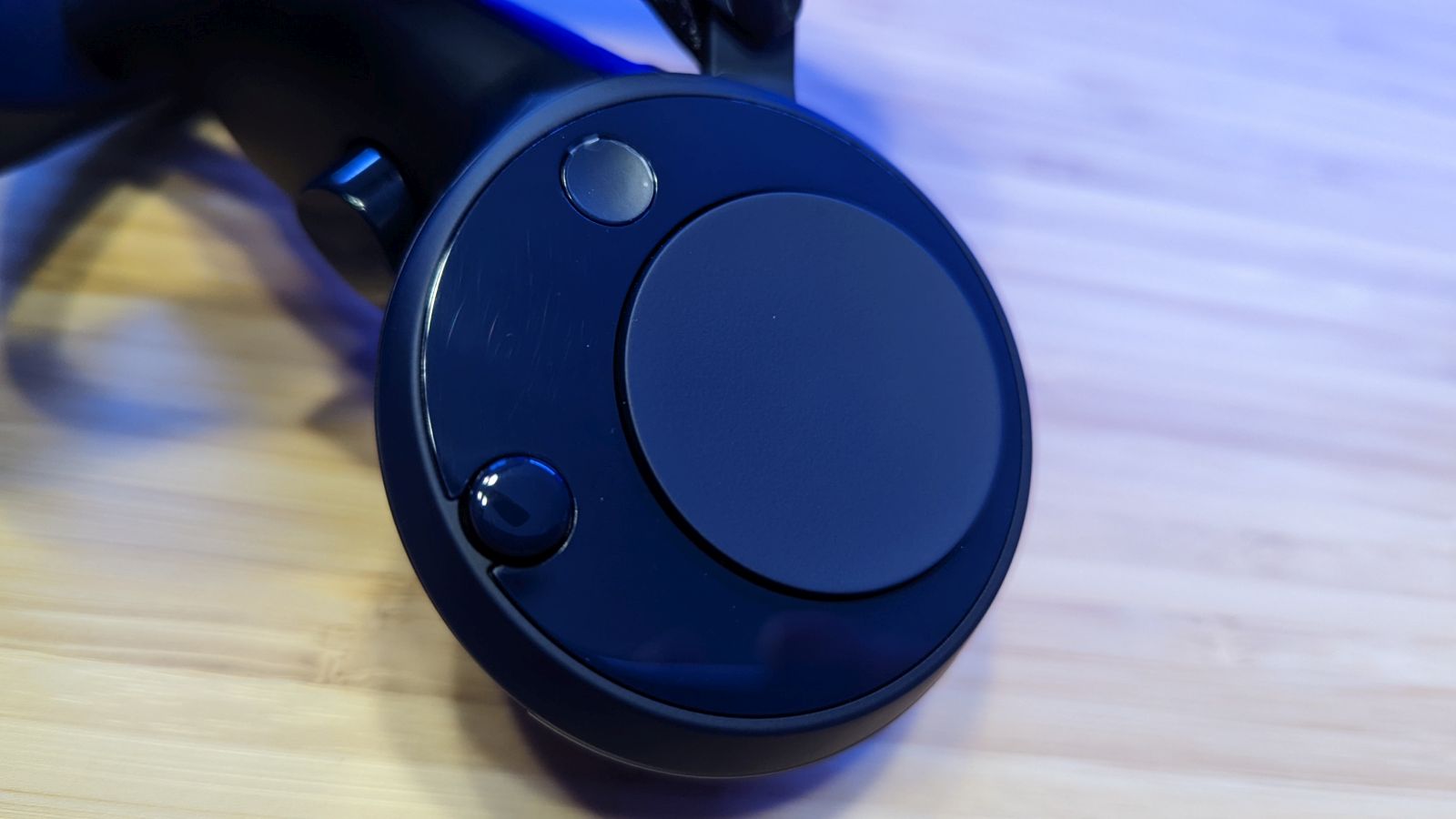 Pairing the Sword controllers is just as simple as any other input device, holding down the pairing button to allow Steam to search for it. Here, you have a second option – Pimax’s own configuration tool called PiTool. I have to admit that PiTool was a bit of a mess in the beginning, riddled with UI problems and bugs, but it has come a very long way. Now you can adjust a ton of options within the Pimax series of headsets, including resolution, framerate, field of view and far more. You can also use it to pair the controllers with SteamVR, giving you a one-stop shop to set up your entire VR rig – headset, controllers, and lighthouses. Simply select “Pair Device” and you’ll find a heading labeled Sword controller waiting for you. Two button presses puts the Sword controller into pairing mode, and it should immediately connect. No more setup is required, so you are free to get to sword swinging in virtual reality.

The last visible difference comes in the form of two lights on the front of the Sword controllers. On the PlayStation VR headset these lights are used for positional tracking, but as far as I know this isn’t necessary with SteamVR lighthouses. Still, they offer a more visible indicator of charging, with the front wedge of the Sword turning orange. Pairing, they’ll flash blue, and when connected and ready to use, the lights turn green. When power gets low, they flash red, though you’ll need somebody else to tell you – you won’t see them inside the headset, of course. In practice, I didn’t notice any difference in my controls or controller detection, so they are likely just aesthetic in nature.

Using the Sword controller on a variety of games, my only real complaint comes from the trackpad and relocating the second button, though I wanted to try a wide variety of popular games and genres to get the full effect. The relocation of the second button doesn’t affect gameplay in any meaningful way in most games, merely changing the position. The trackpad on the other hand, is going to require some adjustment. In ultra popular music-based or rhythm games like Beat Saber, Pistol Whip, Synth Riders, Audica, Superhot VR, and Electronauts, the trackpad is irrelevant, but the comfort and the way the controller rests in the hands certainly is. The Sword controllers are crazy comfortable for these games, frankly putting every other controller (including the Index Knuckles!) to shame. 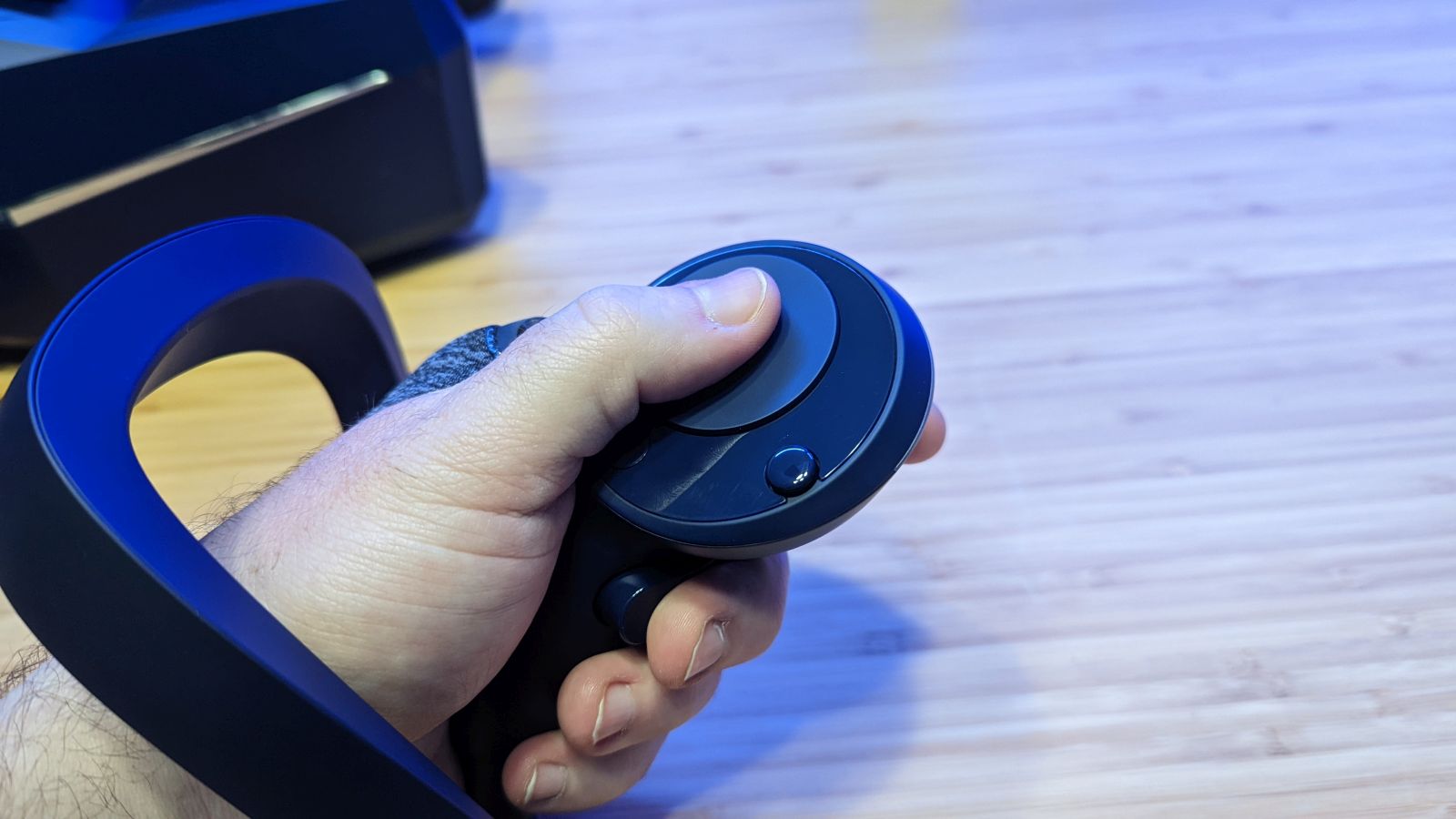 Switching gears to another popular game, Blade & Sorcery is a mix of movement and swordfighting, leaning more on motion controls than movement. The Sword controllers live up to their namesake here, again feeling like a traditional single-handed weapon grip. It adds to the immersion as the circular wrist guard feels almost like a basket-hilt weight of a basket-hilt Scottish longsword or a fencing foil.

Half-Life Alyx is easily the best VR adventure game on any platform anywhere, so that’s an obvious choice to test. It also involves a wide variety of motion types, individual finger detection, complex reload actions, and plenty of rapid movements to avoid pesky headcrabs. The controllers suffer a bit as there is a lot of movement in the game, and you’ll want to remap that left middle finger trigger – by default it opens the game menu.

No Man’s Sky is an absolute treat in VR. The Sword controllers worked well on the ground, but the excellent motion controls were downright exhilarating in space combat. It’s not going to beat a HOTAS setup in a game like Elite Dangerous, but it does provide a different kind of experience. It’s one thing to hit a button to fling open your cockpit, it’s another thing entirely to reach behind you and actually open it with your hands. 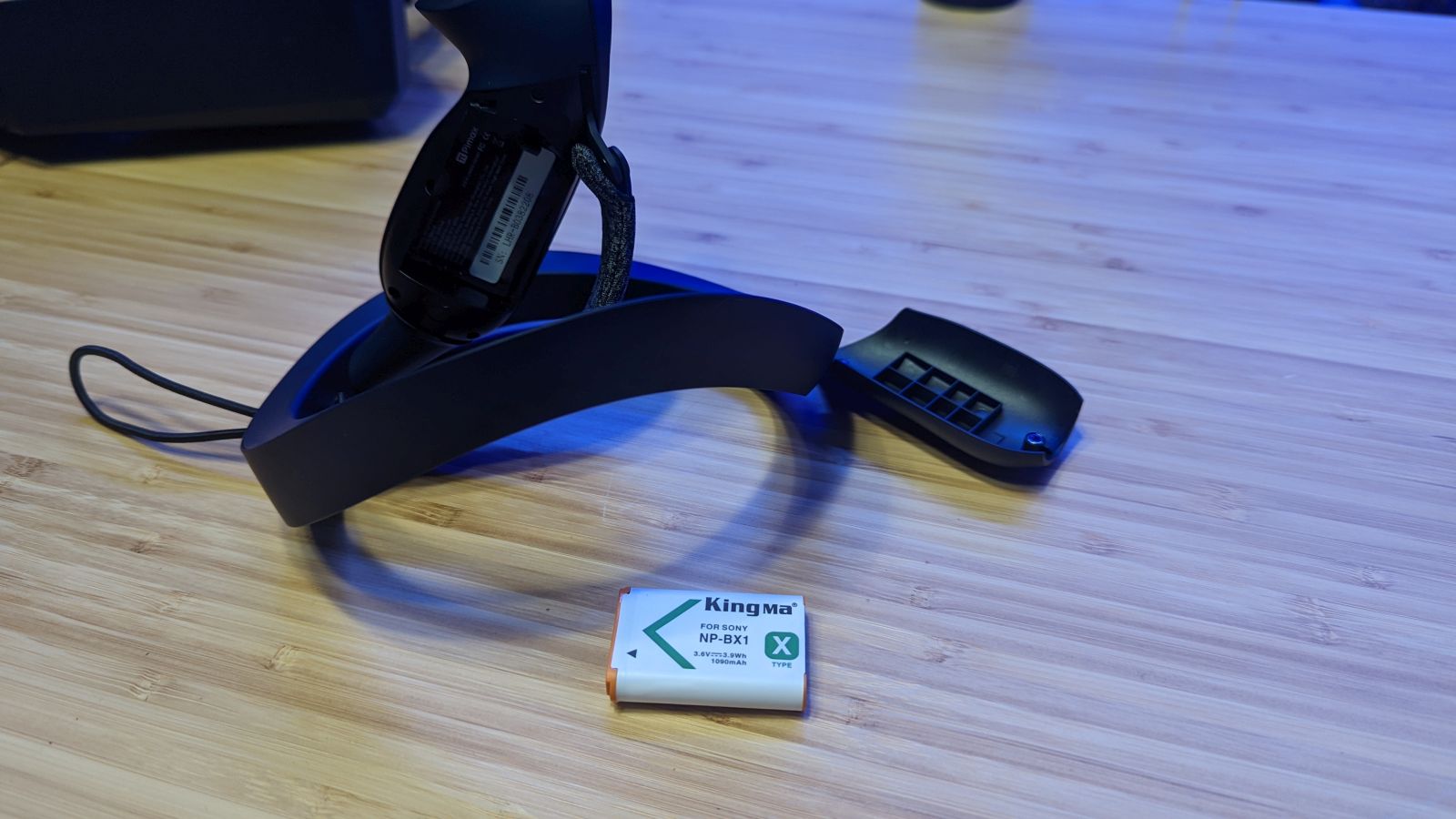 In point of fact, in general, these secondary trigger buttons are just buttons, but you’ll need to remap them. In The Walking Dead: Saints and Sinners I couldn’t enter the game as it wanted me to recalibrate, but I didn’t have a button mapped to that by default. Similarly, Synth Riders wanted me to tap a similar button but to no avail. It’s a bit more fiddling than you’d find with another controller, though it’s a minor nuisance at best if you simply take care of it up front. Map all the buttons at the controller level in Steam and they’ll work just fine when you load up your favorite game.

It is worth noting that, at present, the Sword controller doesn’t support individual finger tracking. That isn’t to say that it can’t, in fact it has all of the sensors present in the controller already – the Pimax team just needs some additional time to perfect the software necessary to utilize it. At present the list of games that support individual finger tracking can, ironically be counted on two hands or less, and the ones that do support it do so to almost zero effect, so I find this to be a non-issue.

After all this testing, it was time to talk about battery life. The Sword controller uses a Sony NP-BX1 battery – a commodity battery you can find on Amazon for 22 bucks for the official one, or 20 bucks for a charger and two Wasabi batteries. Put simply, jumping back into VR was a matter of popping out the battery and dropping in a new one. With each battery lasting about 4 hours a piece (something I confirmed over multiple sessions), you can put in an entire day of VR by simply buying a pair of spares. With my Index Knuckle controllers, once they are dead, it’s the end of VR time till they charge up again. Points go to the Sword on this one – I will play as long as I want – just avoid the Wasabi batteries, they seem to be substandard.

What it all comes down to is your tolerance for trackpads. Trackpads have mostly been phased out of most devices, so it’s a surprise to see it here. I personally prefer thumbsticks, though the propensity for drift on anything with a stick is real. On the other hand, trackpads can be inaccurate, especially at high speeds. I find the ones used on the Sword controller to be adequate and reachable, and I can’t say I had any issues with movement beyond my preference for a thumbstick. You’ll have to make up your own mind – just know that the trackpad works, and it works better than you might think.

While the trackpad may be divisive, the Sword controller is a fantastic alternative to Valve’s Knuckle controllers. With a commodity-replaceable battery, it’s well-designed, comfortable, and excellent for most genres. Just know you’ll need to do some button remapping before you play.

Ron Burke is the Editor in Chief for Gaming Trend. Currently living in Fort Worth, Texas, Ron is an old-school gamer who enjoys CRPGs, action/adventure, platformers, music games, and has recently gotten into tabletop gaming. Ron is also a fourth degree black belt, with a Master's rank in Matsumura Seito Shōrin-ryū, Moo Duk Kwan Tang Soo Do, Universal Tang Soo Do Alliance, and International Tang Soo Do Federation. He also holds ranks in several other styles in his search to be a well-rounded fighter. Ron has been married to Gaming Trend Editor, Laura Burke, for 21 years. They have three dogs - Pazuzu (Irish Terrier), Atë, and Calliope (both Australian Kelpie/Pit Bull mixes).
Related Articles: Sword Controller, VR
Share
Tweet
Share
Submit