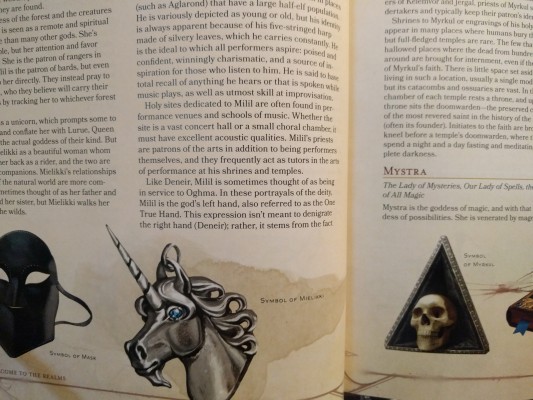 If there is a setting in Dungeons & Dragons that deserves its own book to showcase the amazing stories found therein, it has to be The Sword Coast. The Baldur’s Gate and Icewind Dale series of games, recently-released Sword Coast Legends, Neverwinter Nights, and its MMO counterpart Neverwinter are all set in this fabled and dangerous portion of the Forgotten Realms. Well, the team at Wizards of the Coast agrees, and they’ve build the Sword Coast Adventurer’s Guide as a reference to craft worlds of adventure.

The Sword Coast and all of Toril were imagined all the way back in 1975 (though the first books were released a decade later) and has been constantly refined ever since. The mythology of the Forgotten Realms came to life through books such as The Elminster Series, The Harpers, and The Knights of Myth Drannor Trilogy just to name a few. Deeply integrated into the roots of the original releases of Dungeons & Dragons, this book updates the setting and mechanics to operate with the Fifth Edition ruleset.

A pantheon of gods

The first two chapters of the book focus deeply on the setting of the Realms, as well as the Sword Coast, surrounding islands, and even The Underdark. The next two are likely where most players will start, detailing the races of the realms including Dwarves, Elves, Gnomes, Dragonborn, and Tieflings. If you’ve not played Dungeons & Dragons in a while, the last two will certainly require the primer presented in this book.

Religion plays a large part in Dungeons & Dragons, and nowhere is that more true than in Toril. I was very pleased to see an in-depth look at the Pantheon of gods worshiped by each race, what sorts of bonuses each bestows, but most importantly the background for each. If you are designing a module, or simply want to properly roleplay your character, it is a must-have.

A diverse cast of characters.

Moving further into the book, the full range of classes are represented here. Again, if you’ve not played for a while, bumping this against the Fifth Edition Player’s Guide will set you straight on the new rules and class rules. When combined with the potential sub-race archetypes, you can craft a pretty fantastic backstory. Want to build an adventurer around a mixed-heritage half-orc Barbarian walking the Path of the Totem Warrior who, thanks to a seaborn upbringing, worships Umberlee — the Bitch Queen of the Depths? Perhaps a Human Harper Bard focused on the Glaur (a curved set of marching pipes that look like a cornucopia) who grew up in a house aligned with Waukeen, the Merchant’s Friend, provides a better and more privileged backstory? With this much information at your fingertips, it’s hard not to create a compelling story.

To help with crafting your world (or if you are a player, living in it), there are small green sidebars and detailed artwork throughout the book. These sidebars have snippets of specific history, including songs, flavor text, or legends you might integrate or encounter in your journeys. The artwork can also be translated into reference for your adventure, giving examples of symbols, traditional garb, language translations, and beautiful examples of how a particular type of character might appear.

Old classes are made new again

The final chapter in the book provides backgrounds that you can use as a kickstarter framework. It covers characters, places, the sorts of skills those people might possess, equipment they might carry, and languages they might speak. There are also included dice-roll charts that can provide a randomness to a character’s personality, ideals, motivations, and more. If you need a kickstart to creating your background, or if you are building a run of your own, it can give you that creative spark to push your imagination.

So…I guess the question is whether the book is worth it. That’s a tough question without a campaign run. Much like I did for my Out of the Abyss review, I went to my local geek shop and plunked down my hastily-cobbled module. All in all, my impromptu friends enjoyed the setting, and even with years of rust I was able to put together a convincing, but short, run. Veteran Dungeon Masters and players will, naturally, get more out of it. The price is a little more reasonable at $39.99 MSRP, which is expected given its 157 pages of content versus the 256 in Out of the Abyss, but I’ve found it at Amazon for just over $26 which is likely more palatable.

Whether you intend to gather your party and venture forth into the Sword Coast, or if you are designing your own campaign as Dungeon Master, Sword Coast Adventurer’s Guide is a fantastic companion guide. A little shorter than anticipated, but a solid inclusion in any Faerûn adventure.

Ron Burke is the Editor in Chief for Gaming Trend. Currently living in Fort Worth, Texas, Ron is an old-school gamer who enjoys CRPGs, action/adventure, platformers, music games, and has recently gotten into tabletop gaming. Ron is also a fourth degree black belt, with a Master's rank in Matsumura Seito Shōrin-ryū, Moo Duk Kwan Tang Soo Do, Universal Tang Soo Do Alliance, and International Tang Soo Do Federation. He also holds ranks in several other styles in his search to be a well-rounded fighter. Ron has been married to Gaming Trend Editor, Laura Burke, for 21 years. They have three dogs - Pazuzu (Irish Terrier), Atë, and Calliope (both Australian Kelpie/Pit Bull mixes).
Related Articles: Sword Coast Adventurer's Guide
Share
Tweet
Share
Submit