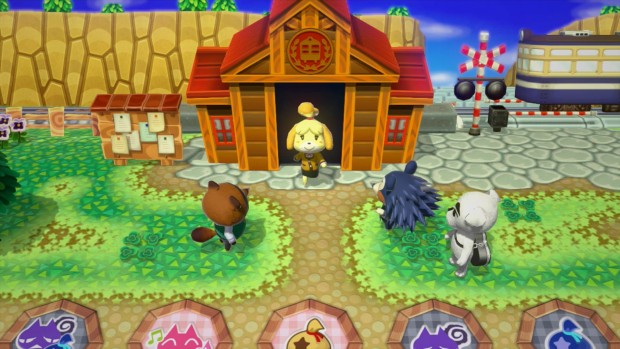 Animal Crossing: amiibo Festival shares many similarities with traditional Animal Crossing games. It’s serene, slow-paced, and lighter, much like its life-sim roots. More importantly, the game puts little focus on goals, choosing instead to place its emphasis on the value of smaller moments. But while traditional Animal Crossing games succeed at highlighting the value of menial day-to-day tasks, there is far less success when this formula is translated to the competitive nature of digital board games. Animal Crossing: amiibo Festival retains the spirit of its brand, but never manages to entertain in the process, resulting in a dull and uneventful bore that is full of life but lacking any sort of fun.

The ultimate goal of amiibo Festival is to be the player that collects the most Happy Points. As traditional as board games come, players take turns rolling dice and moving about the game board. Various different space types litter the board, bringing good or bad fortune wherever a player lands, offering light elements of strategy and luck. The player with the greatest amount of Happy Points at the end of the game is crowned the winner, and moving around the board is all that comprises this simple task.

As straightforward as amiibo Festival is, it is still unmistakably an Animal Crossing game. Aside from the colorful visual style and charmingly squeaky sound effects,many of Animal Crossing’s familiar gameplay elements still factor into amiibo Festival. Game sessions are played on a monthly calendar, and it’s common to see limited-time events pop up on particular days. This calendar also affects the weather, as playing in December can yield a snow-covered game board, and playing in July can be bright and sunny. These events and happenings vary from month-to-month, helping amiibo Festival to live and breathe as an Animal Crossing game.

One of amiibo Festival’s familiar elements comes in the form of journal entries. Every space on the board comes with a mini story that details an activity that would be found in traditional Animal Crossing titles. These can range from mailing a letter to hosting a video game party. While these routine tasks come with entertaining results in a normal Animal Crossing game, they are little more than filler in amiibo Festival. Part of the fun of Animal Crossing comes from living in your town, with these small moments being part of a greater, expanding relationship. Without anything to build upon, amiibo Festival’s journal entries are just mundane one-offs that provide no real gameplay value.

That lack of any sort of gameplay value is an unfortunate constant in most of amiibo Festival. The mechanics are sound in their execution, but amiibo Festival feels largely uneventful without any real gameplay hook. It plays a lot like Mario Party, but without mini games between turns Animal Crossing: amiibo Festival is really just an hour of rolling dice without any excitement. There is a void of any kind of skill or strategy involved, and therefore none of the friendship-ruining competition that Mario Party is known for. It’s dull, boring, and feels like buildup to a payoff that never comes.

The way that amiibo Festival plays feels gimmicky and somewhat forced, as well. Players use an amiibo as their playable character and roll the dice by tapping their figurine to the GamePad and quickly lifting it. All players share the GamePad rather than their own controller so playing amiibo Festival with friends is ultimately a lot of tapping and passing. Nothing in amiibo Festival could not have been done without amiibo and there is ultimately no real value in their forced inclusion. Outfits and items can be stored to the figures, but there’s no real reason why this could not have just been selected from an in-game menu. Two amiibo are thankfully bundled in, but it’s still an unnecessary requirement for a game that gets no gameplay benefit from using it.

Also included is a set of amiibo cards which can be used to access mini games outside of the main game mode. The cards can be read from the GamePad, just like the figures, but never really add anything to the gameplay. Removing cards at a precise moment, or quickly putting down the right card based on visual cues are among a few of the surface level mini game tasks available, but these interactions never manage to feel anything more than gimmicky. As monotonous as these mini games are, though, it’s a shame that they weren’t at least injected into the main game to provide a greater sense of competition and purpose.

It’s rare to see a game that is bad solely based on its methods. Bad games are usually marred by flawed controls and broken mechanics, rather than the quality of their premise. Animal Crossing: amiibo Festival has a clean and familiar presentation with a strong execution, but is entirely comprised of fluff rather than substance. Younger audiences may find a very basic enjoyment of amiibo Festival, but its methods are extraordinarily humdrum and way too frequently building up to nothing. Animal Crossing: amiibo Festival may be full of life, but is ultimately unexciting and tedious.

Animal Crossing: amiibo Festival retains the charm that the series is known for, but is uneventful and boring. Move out of this town.

Gaming Trend's resident amiibo collector, Matt's a lifelong gamer with a soft spot for Nintendo. As a new father, Matt often struggles to stay as involved as he has been in years past but can always be counted on to come back for some engaging geeky conversations. A resident of Philadelphia, he is currently working on building up his Man Cave with all things Marvel, Star Wars, and Video Games. As an old-school gamer, Matt firmly stands by his belief that gameplay will always be more appealing than story.
Related Articles: Animal Crossing: amiibo Festival
Share
Tweet
Share
Submit