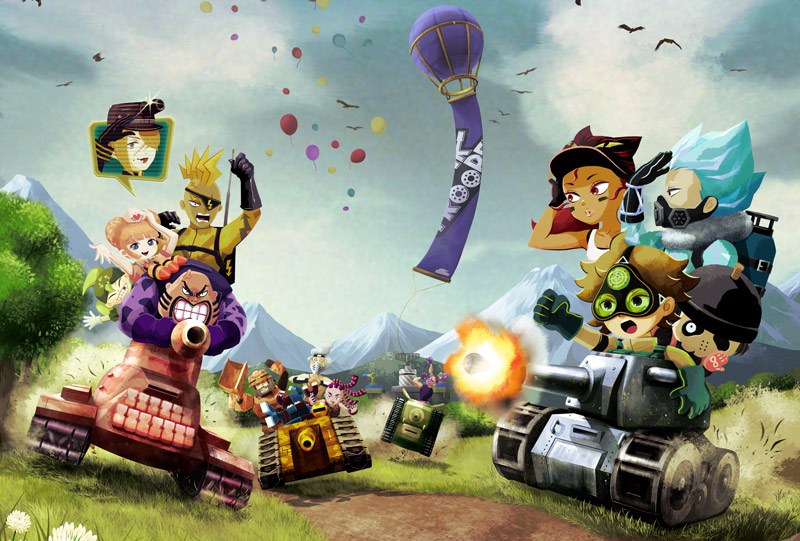 Tank Troopers isn’t presumptuous. It features sizeable arenas, but it never attempts to create its own world, and it’s populated by endearing characters, but it doesn’t give them any sort of backstory. It’s a focused, to-the-point tank combat game, and it succeeds because it never tries to be more than it is.

This means that jumping into the game takes no time at all. A brief tutorial teaches you how to commandeer your tank and how to exploit each of the Tank Troopers — eccentric, cartoony characters that grant your tank a unique power-up on the battlefield. After that, you’re prepared to duke it out in the game’s single-player campaign and multiplayer modes. The campaign features 30 missions scattered across six colorful worlds, each with a unique objective that requires thoughtful employ of the Troopers assigned to your tank. Felicity, for example, will give you a handy speed boost, and for tougher fights, Medica is critical in keeping your health bar high. Each stage grades you on your performance, and to achieve the highest rank, you’ll need to learn how to use each Trooper effectively, which added an appreciable level of difficulty to a title that feigns simplicity at first glance.

Stunner gives you the ability to hurl lightning bolts at your enemies from long distances, inflicting them with confusion. Cold Warrior, on the other hand, is your go-to-guy for close-range ice attacks.

Early on, the campaign isn’t too difficult, with simple missions pitting you against paltry enemies that make easy cannon fodder, but this gives players the opportunity to get a grip on the controls before the mission difficulty ramps up. Eventually, enemies have Tank Troopers of their own and come in larger numbers, and sometimes you’ll need to contend with them on top of your primary objective — a feat that feels earned after you’ve spent twenty-plus stages perfecting your tank badassery. That being said, there are a few duds in the bunch, including one particular grenade of a mission where you have to prevent enemies from reaching any of the four entrances to your base. In that level, as in one or two others, enemies spawn unrealistically far from you, and success is determined more by where they spawn rather than how well you’ve mastered the tank.

These design gripes don’t extend to the game’s notably enjoyable 6-player multiplayer modes. Tank Troopers touts three different game modes — Team Battle, Bomb Battle and Free-For-All, and if you can get the bodies together for it, it’s darn good fun. Team Battle and Free-for-All are pretty standard — blow up some of your friends or blow up all of your friends, respectively — but the third mode, Bomb Battle, is a standout, requiring your team to blast an Epcot-sized ball across the map into your enemy’s base. This mode throws all of Tank Trooper’s mechanics together — power-ups, mobility, some physics — giving the player a surprising volume of strategic options for a 3DS multiplayer feature. Should you take point and rush the bomb to the enemy base? Or should you target your enemies themselves? At one point, I perched at the top of a hill with a wide line of sight of the bomb, and anytime my opponent tried to snag it, I’d shoot the bomb away from them, watching them struggle to reorient themselves. (Because, why not?)

For all its fun, it’s a shame the game only features local multiplayer. I only played with one other person, and I had a *ehem* blast, but I can only imagine the fun I could create with a full team. The game touts Download Play, but it limits you to only one of the single-player’s six maps and completely removes the mode’s customization options, so to get the full experience, every player will need to own the game. Tank Troopers is only $7.99 right now on the Nintendo eShop, and while that’s a good bargain for a bite-sized game packing both solid single-player and multiplayer modes, good luck trying to wrangle together five friends to play it with you.

Tank Troopers is, at most times, everything you want in a downloadable title. It fires you right into the action, quickly introducing you to its simple tank-based mechanics then forcing you to test your mettle in increasingly difficult challenges that never take more than a few minutes to conquer. But for longer, more social gameplay sessions, the game also sports multiplayer modes that are accessible for both competitive mode newcomers and strategy-minded gamers alike, albeit a challenge to round up the people to play it.

Hunter Wolfe just graduated with his B.A. in Communication/Journalism from Shippensburg University and has nearly four years of professional writing experience. His content has been featured on sites like Rolling Stone's Glixel, Destructoid and The Artifice. You can check out his full portfolio at: www.hunterawolfe.com.
Related Articles: Tank Troopers
Share
Tweet
Share
Submit