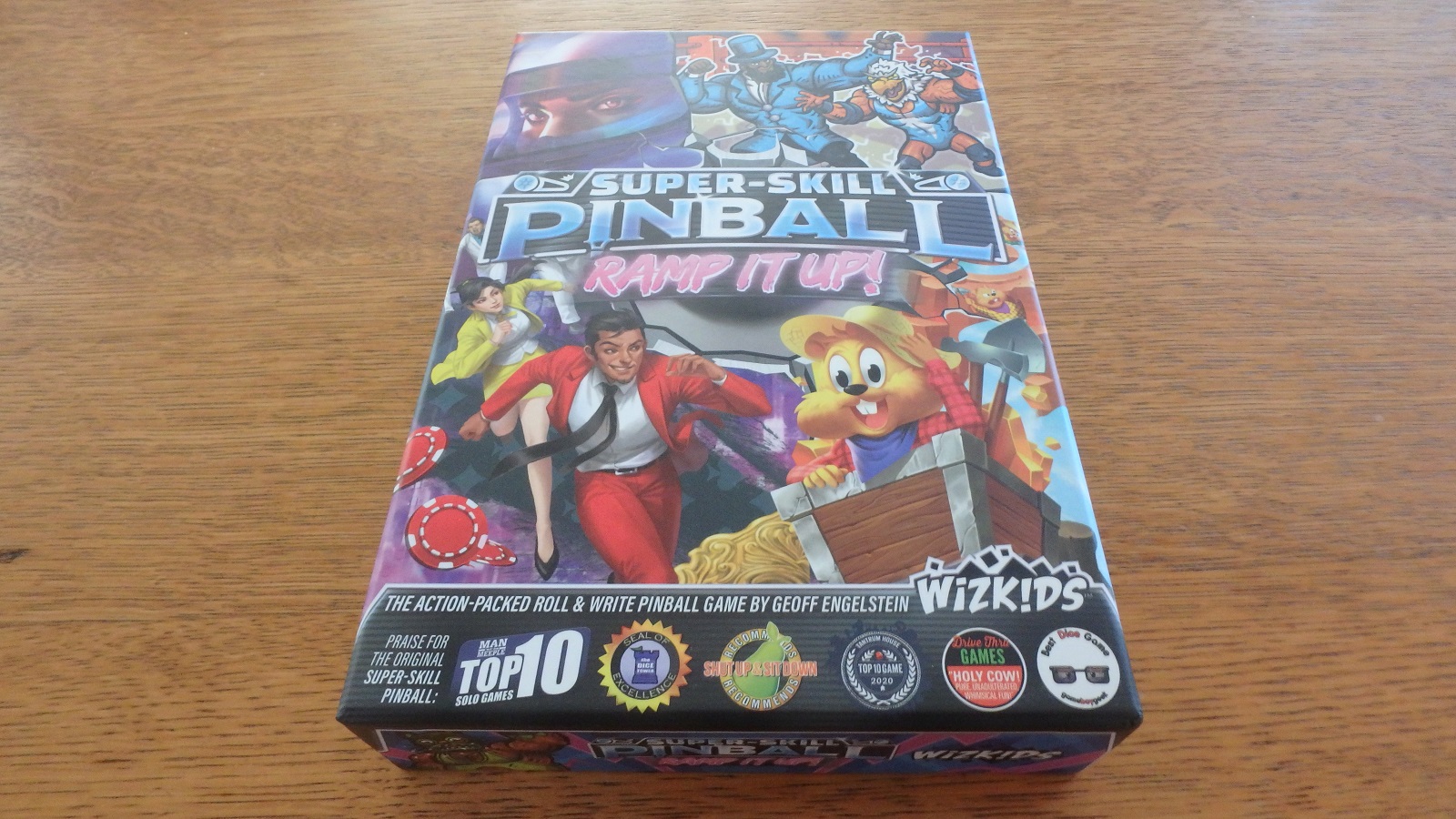 I’ve always found the development of different series within gaming to be extremely interesting. By frontloading a decent amount of mechanical framework and expectations, developers create a foundation that they are then able to riff off of, which creates some really cool ideas. In video gaming, the evolution of Creative Assembly’s Total War series has been a delight to watch over time. In the board game space, this is reinforced by similar core rules that games within a series typically share, like in the hefty 18XX series. It is in this light that I assert that the four boards contained in Super Skill Pinball: Ramp it Up are actually four separate games within the Super Skill Pinball series, and as such, this is by necessity going to be just as much me recounting my journey through four games as it will be a review.

Super Skill Pinball starts players off gently with Gopher Gold, a smooth and beginner-friendly game. While the box does contain a perfectly acceptable beginner’s guide, that isn’t really my style, so I immediately threw it aside and delved into the full rules. There I met the first thing I love about Super Skill Pinball: the book and the rules therein are simply wonderful, from the abundance of illustrative pictures to the marriage of theme and mechanics that made everything not only make sense, but easy to remember. After the initial chapter explaining the core rules, there’s a brief section that explains how each game differs, and since Gopher Gold is the beginner game, this mostly just reiterated core rules; how specially colored arrows and certain bonuses work and the like. And while my first game was still kinda rough (which will be a recurring feature in this series), starting with my second play I started to understand all the critical acclaim.

For those uninitiated into the roll and write genre (the most mainstream example is Yahtzee), it can be summarized by its core loop of players rolling dice and then deciding how to commit those dice to their personal player sheets. In this way, Super Skill Pinball doesn’t diverge too much from the genre’s basic formula: someone will roll the table’s pair of dice, and then players choose one die, with which they activate a feature on their board with the corresponding number available. However, this is also where Super Skill Pinball also elevates itself with its production values, ranging from “oh, that’s nice” (my reaction upon first seeing the pink and powder blue dice the box comes with) to the truly immersive. You see, you’re not just marking out little squares from your boards, you’re also sliding a shiny ball token around between the features. The boards themselves are gorgeous pinball machines, which leave you truly feeling like you are playing pinball, just with dice and dry erase markers. 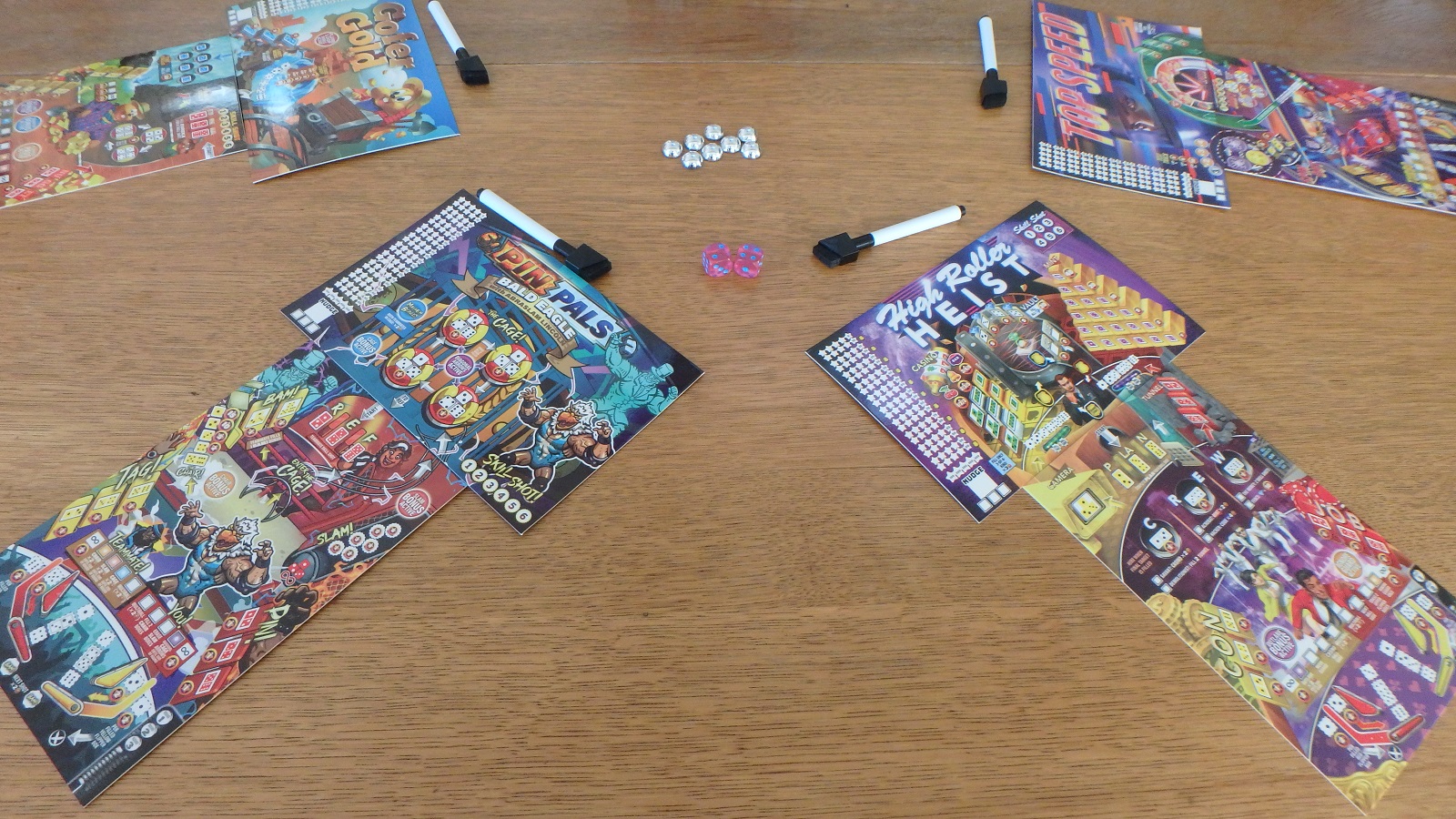 Once you get the basic rules under your belt, Gopher Gold becomes a simple puzzle of risk management and deciding when to activate which features, with or without bonuses. That isn’t to say it isn’t rewarding. Once I really mastered Gopher Gold and the strategy to approach it with, it became simultaneously chill and exciting, with easy enough decisions that always contained a nip of danger, and ultimately final scores so large they would blot out the sun. And so, having felt accomplished, I graduated to High Roller Heist.

Thinking I had the way to play Super Skill Pinball down pat, I approached High Roller Heist with the same strategy I had been doing well on Gopher Gold with. High Roller Heist proceeded to slap me in the face with a horrendous score, leaving me feeling like a big silly dumbdumb idiot moron, because of course High Roller Heist is a different game and I should approach it differently. And that was the second time I was impressed by this box: by simply tweaking the features that a game has, different installments of the Super Skill Pinball series have a wildly different feel. I’m not going to be revealing the strategies I came up with for any of the games, since figuring those out are part of the fun; but I will say that High Roller Heist has a unique shoot-from-the-hip opportunism that I learned to really enjoy once I got used to it.

Skipping over Pin Pals for now, the only game in Ramp it Up I really bounced off of was Top Speed. The features themselves are arguably even more simple than those in Gopher Gold, but Top Speed adds a speed mechanic, which will add a set number to all die results. You manage speed by hitting either the gas or brake features. The general rule of thumb here is that flippers require lower results, but scoring features need higher results, often even seven or higher (astute readers will realise seven is higher than a normal d6 will roll). In the end, Top Speed plays a lot like Gopher Gold but with more moving parts to juggle. This isn’t exactly my cup of tea, but could easily be someone else’s. 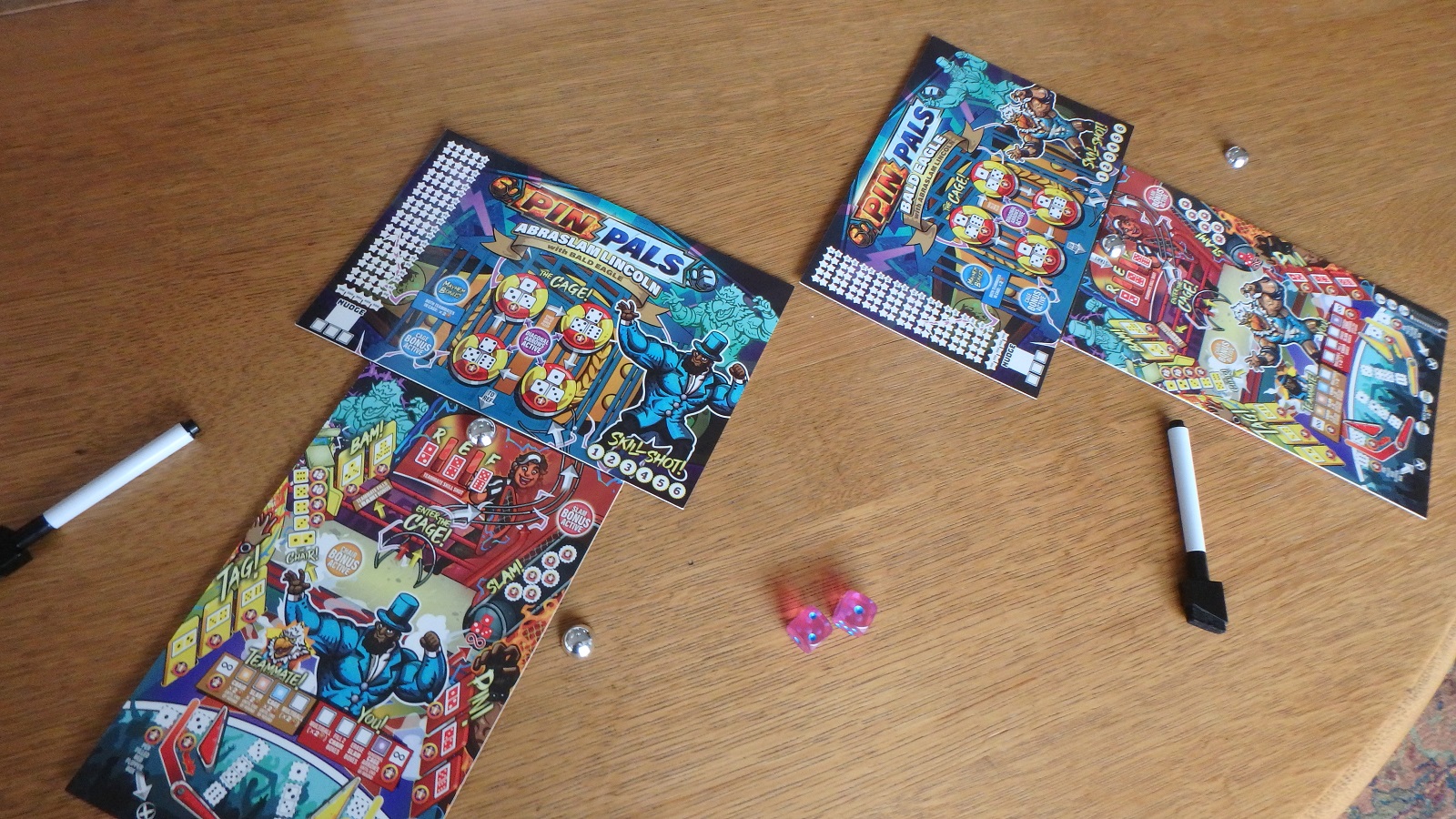 So, let’s talk about Pin Pals. If Top Speed is Ramp it Up at its lowest, Pin Pals is the game at its highest. With the exception that it’s meant to be played in pairs, Pin Pals is also a relatively simple board, and though I generally dislike co-ops, this works so well. Part of it is that turns in Super Skill Pinball are so quick that it feels counterproductive to talk over every single move and play the game by committee like how so many co-ops devolve. The other part is, outside of trying to coordinate your entrances to “The Cage!”, the only interaction between partners is just handing each other sweet bonuses randomly. Unfortunately, Pin Pals is also when Super Skill Pinball’s faults are most on display.

When you’re in the groove playing Super Skill Pinball, it can be a tactile montage of great board gaming moments. Before this game, I was a solo board gaming skeptic, but even after this review, I’ll still be pulling out Gopher Gold after particularly stressful gaming sessions, ones where I perhaps didn’t perform at the top of my game. It’ll give me a hug, tell me to slow down, take it at my own pace. It’ll tell me “good job, here’s some big numbers,” and make me feel competent again. 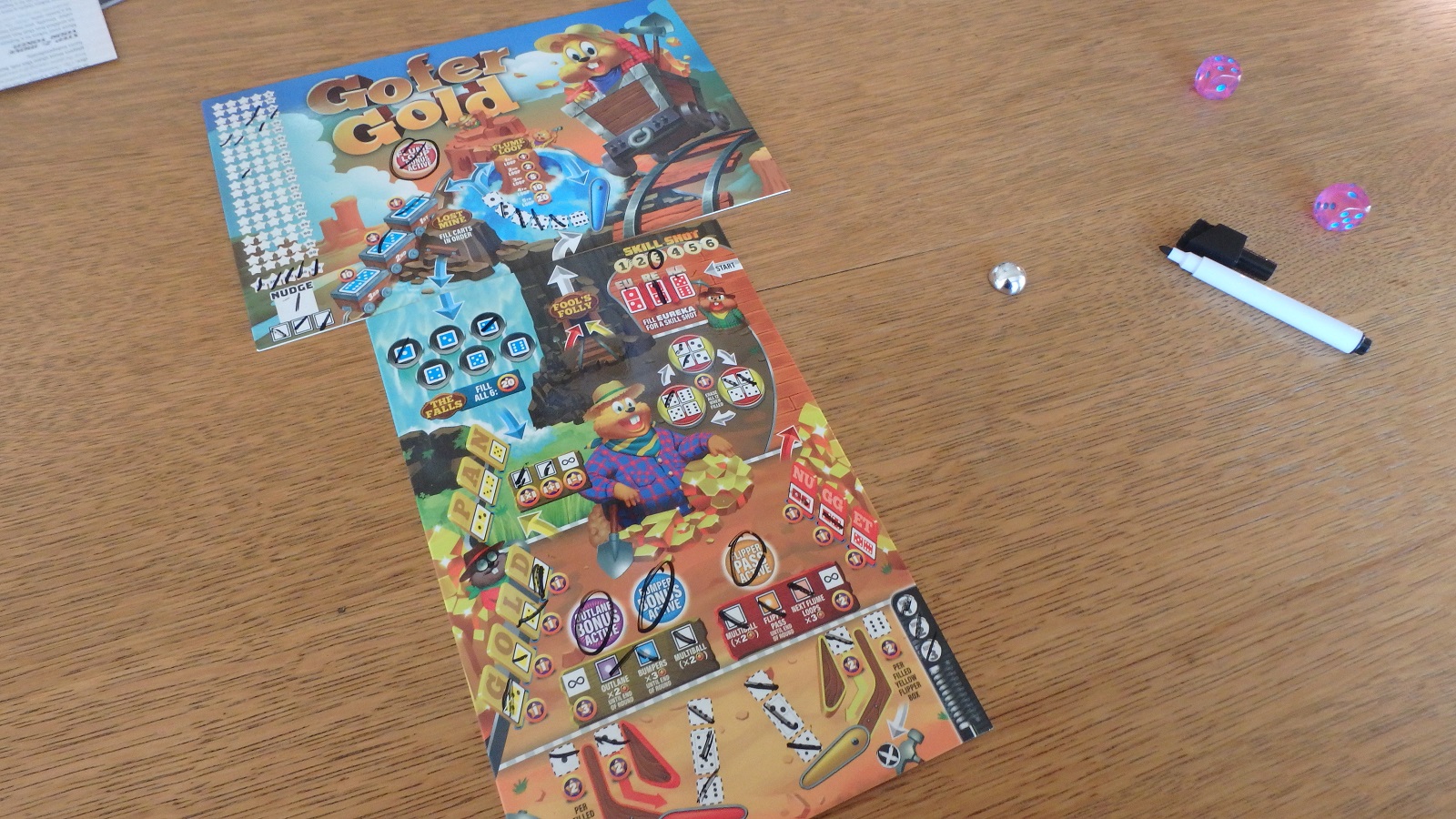 But Super Skill Pinball may actually be best as a solo game. Remember back when I mentioned that most first games of most of these boards are pretty rough? Well, it’s entirely possible for someone to go through all three of their balls and just be sitting at a metaphorical Game Over screen while  the other player is already a hundred points over their score, and still on their second ball. When compared to other roll and writes, which do a much better job of obfuscating the leader and will generally have everyone end at the same time, Super Skill Pinball can too easily create feel-bad moments for multiple players. As much as it pains me to say it, combined with other nitpicks, like the 45 minute playtime being kinda long for a roll and write I’m trying to play with others,  Super Skill Pinball is at its best when played solo.

Super Skill Pinball: Ramp it Up

Super Skill Pinball: Ramp it Up is a beautiful series of games; a nigh-perfect marriage of roll and write mechanics and pinball theme. While there are some unfortunate flaws that I feel could easily sour players on the experience, I feel like playing solo remedies them all.

Nick grew up reading fantasy novels and board game rules for fun, so he accepted he was a dork at an early age. When he's not busy researching the intricacies of a hobby he'll never pick up, Nick can be caught attempting to either cook an edible meal or befriend local crows.
Related Articles: Super Skill Pinball: Ramp it Up
Share
Tweet
Share
Submit