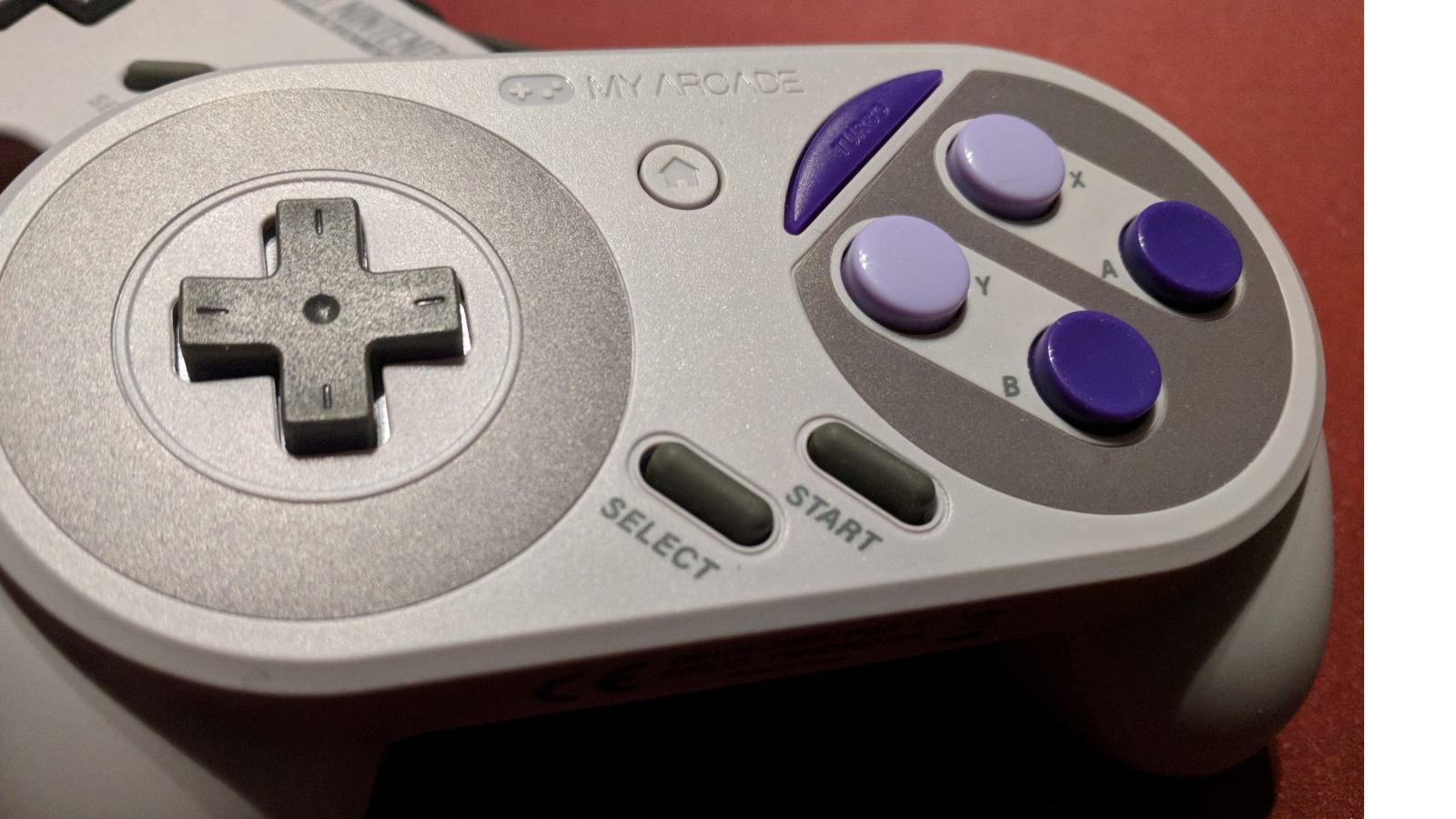 My Arcade has been making controllers for retro gaming for a long time. They make input devices for the NES Classic, and a long list of retro gaming all-in-one portables. Now, they are solving the short cable issue I called out in my review for the SNES Classic Mini — the short cords. Could the My Arcade wireless controller be the update Nintendo’s updated retro console needs for modern gaming on a big screen?

Let’s crack this puppy open and see how it plays…

Unboxing the Super Gamepad, there’s really only two components in the packaging — the controller, and a dongle. As the SNES Classic uses the same port as the Wii and Wii U, you might assume that the controller works for all three platforms… and you’d be right! Using the included adapter lets you use the Super Gamepad for all of the games on the Super NES Classic Mini, as well as all of the Virtual Arcade games on the Wii and Wii U. That said, it’s pretty clear from the retro paint job that this baby was built for the SNES Mini.

Given that we are talking about the golden age of controllers, it’s all about the buttons. Comprised of four primary face buttons, a D-pad, four bumpers, a select, and a start button, — there are no analog sticks to contend with. True to form, however, the A and B buttons are concave, and the X and Y buttons are convex. (Truth be told – on the original the X and Y were concave, with A and B being convex. Not for nothing, the start and select are also reversed as well) Why aren’t they A, B, C, and D? Who knows, but Nintendo’s efforts in this space were the start of all of that nonsense.

On the rear of the controller lie the four bumpers, though here the ZL and ZR buttons are set up as triggers. The L and R bumpers have a satisfying amount of throw, but the triggers feel rather shallow. I never had an issue with them through the course of testing, but it does make me wonder how they’ll hold up over time. I have to wonder if a heavier grade of plastic, filling them in, or adding a second spring would have helped with the weight and feel. You’ll only use these triggers on the Wii or Wii U, so this could be a non-issue for you if you are only picking this controller up for your SNES gaming.

Back in the day, if you wanted turbo buttons, you had to invest in a third party controller. The team at My Arcade threw in a turbo toggle that comes in handy in games like Contra or Gradius. Holding the button you’d like to fire repeatedly, and then tapping the turbo button makes every subsequent press of the face button rapid fire.

A little less width than the official controller, but with a few more features.

One thing I’ve noticed about playing the SNES Mini over time is that it becomes inconvenient to have to get up and hit the physical button on the control to switch games, which I realize may be the laziest statement ever uttered. The Super Gamepad helps you embrace that lazy thought with the addition of a Home button in the center.

Playing classic games on the SNES Classic is fantastic, but having to sit extremely close to the TV brings back childhood memories I’d just as soon forget. Sure, you can order extension cables, but in a house with three dogs, that’s a bit of a non-starter. The Super Gamepad makes the whole affair completely wireless, and I was able to enjoy classic games like The Legend of Zelda: A Link to the Past on my 65” TV at a distance of over 10 feet away, all from the comfort of my couch.

As you’ll see below, the Super Gamepad is slightly smaller than the original Nintendo controller. I feel that the wing arms like modern controllers make it more comfortable, but the half inch less width is likely to make people with larger hands feel cramped. Having a few friends try it, everyone noticed that it was smaller, but nobody complained, for whatever that’s worth.

If there’s one hitch that might give people a moment of pause, it’s the price. The MSRP on the Super Gamepad is $24.99, whereas a two-pack of cable extenders is just $7.99. If your goal is to pick up a pair of these for classic fighters like Street Fighter II, it’ll cost you almost as much as the controller itself. For me, it’s a no brainer — there’s simply nothing better than introducing new generations to classic games coupled with modern convenience and comfort.

The Super Gamepad delivers a classic controller feel, but with the convenience of a dedicated home and turbo button, and wireless connectivity. While there are some cosmetic oddities, it nicely fills a gap that the official product left behind.

Ron Burke is the Editor in Chief for Gaming Trend. Currently living in Fort Worth, Texas, Ron is an old-school gamer who enjoys CRPGs, action/adventure, platformers, music games, and has recently gotten into tabletop gaming. Ron is also a fourth degree black belt, with a Master's rank in Matsumura Seito Shōrin-ryū, Moo Duk Kwan Tang Soo Do, Universal Tang Soo Do Alliance, and International Tang Soo Do Federation. He also holds ranks in several other styles in his search to be a well-rounded fighter. Ron has been married to Gaming Trend Editor, Laura Burke, for 21 years. They have three dogs - Pazuzu (Irish Terrier), Atë, and Calliope (both Australian Kelpie/Pit Bull mixes).
Related Articles: Hardware, Super Gamepad
Share
Tweet
Share
Submit