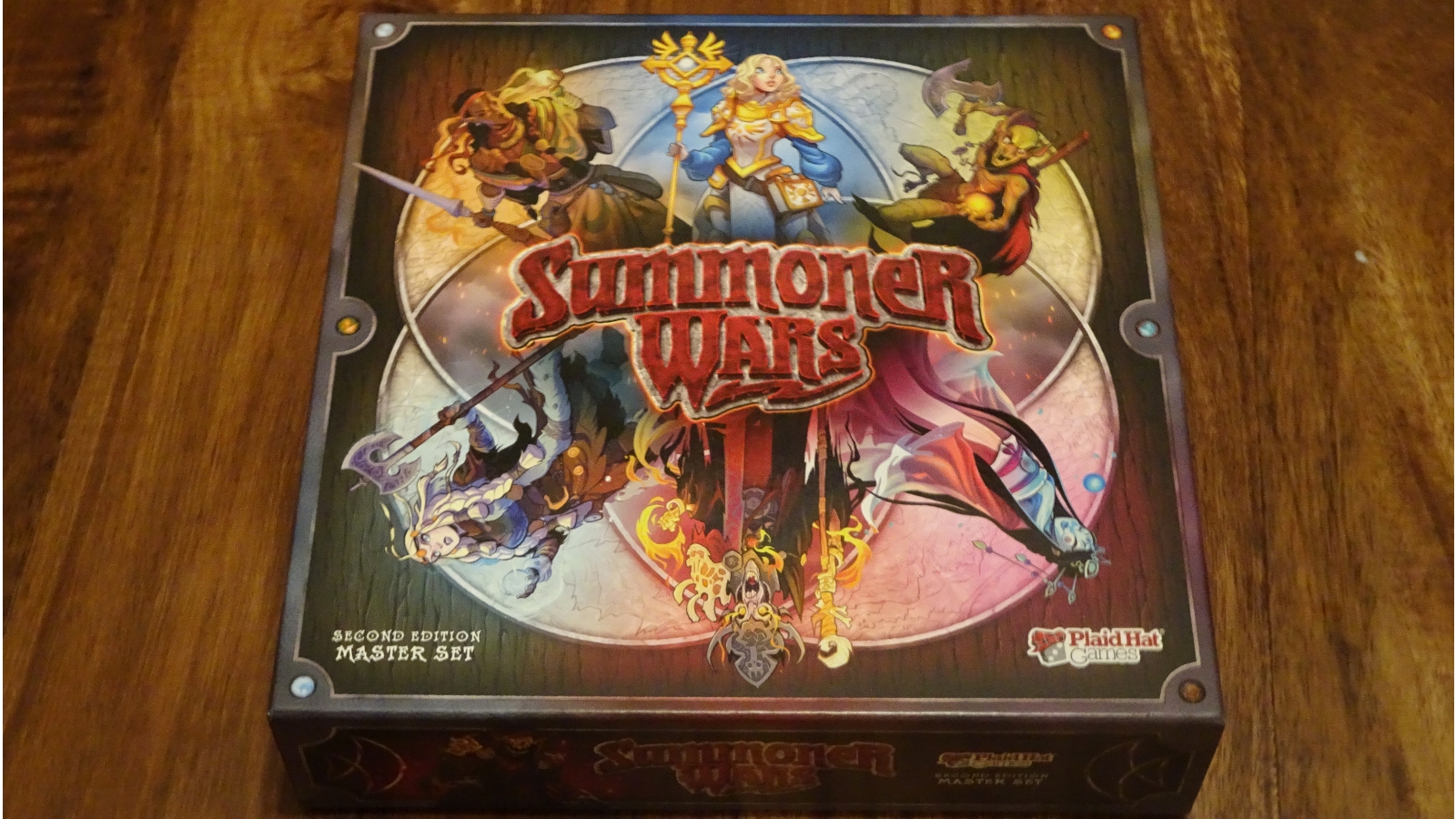 Summoner Wars (Second Edition) is a 2 player game that is a remake of the previously released game of the same title where players summon various creatures represented by cards to a simple tactical board to battle to the death. From here these creatures maneuver around and attack, with the eventual goal of trying to take out the enemy summoner. Players manage a very limited deck, mana pool, and units as the game drives them towards the inevitable end of only one victor. 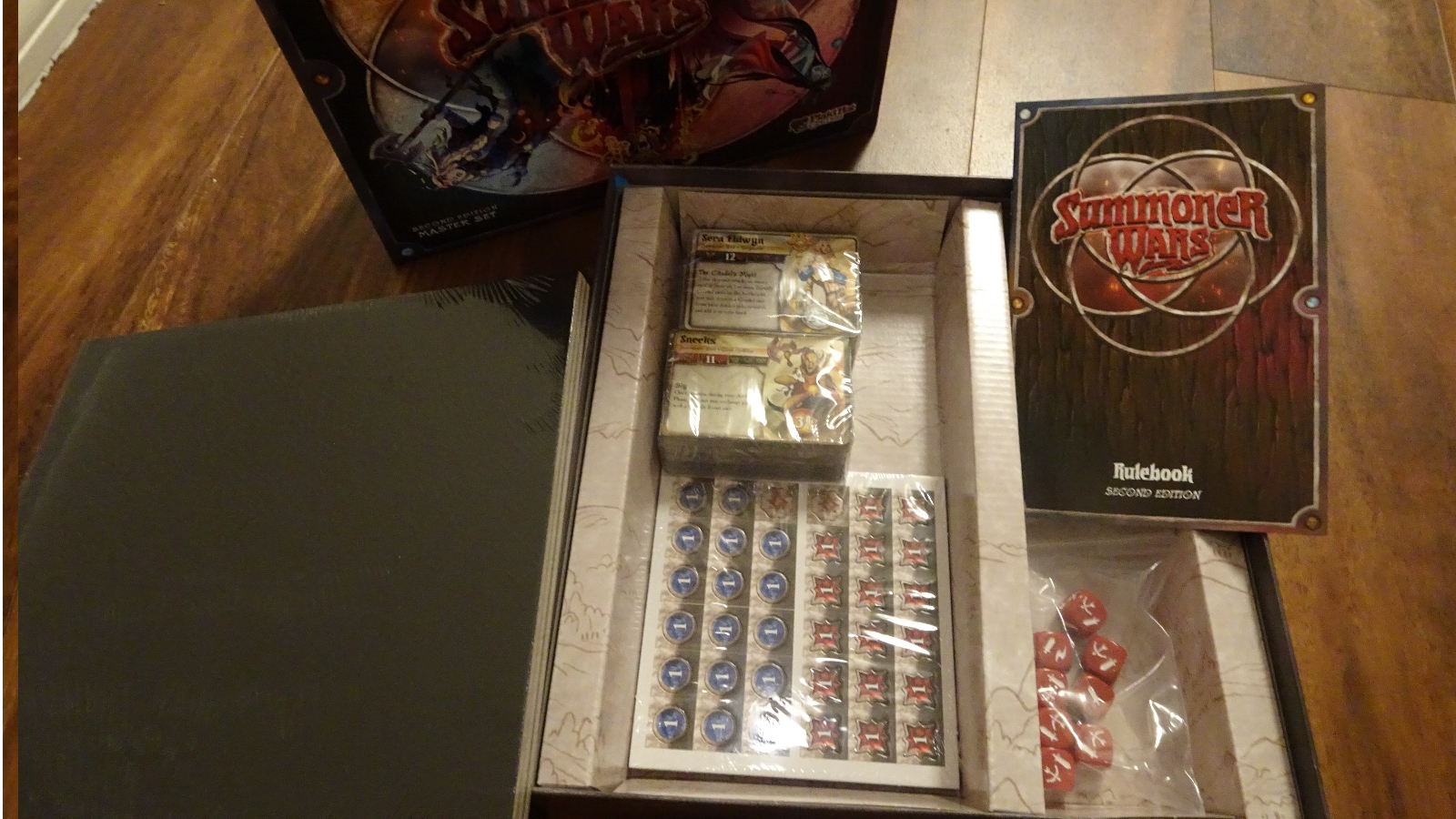 The entire game is built around driving players to combat and the end of the game. From the beginning it is obvious the game is trying to get you to go fight. There is a very limited number of cards and you receive damage if you do not attack. While these are set up to make an aggressive game, as will be covered in more detail below, many of these feel somewhat tacked on, and it is hard to escape from the feeling there is some sort of design flaw the game is attempting to mask with such rules.

From the beginning, players will have their deck of cards, and while the game comes with preconstructed race/faction decks, you have the ability to make your own deck out of the cards. From here, players take opposite sides of a board where they set up their starting summoner, a summon gate and a unit or two. Naturally a battle to the death is the only result of entering this 1v1 pit. 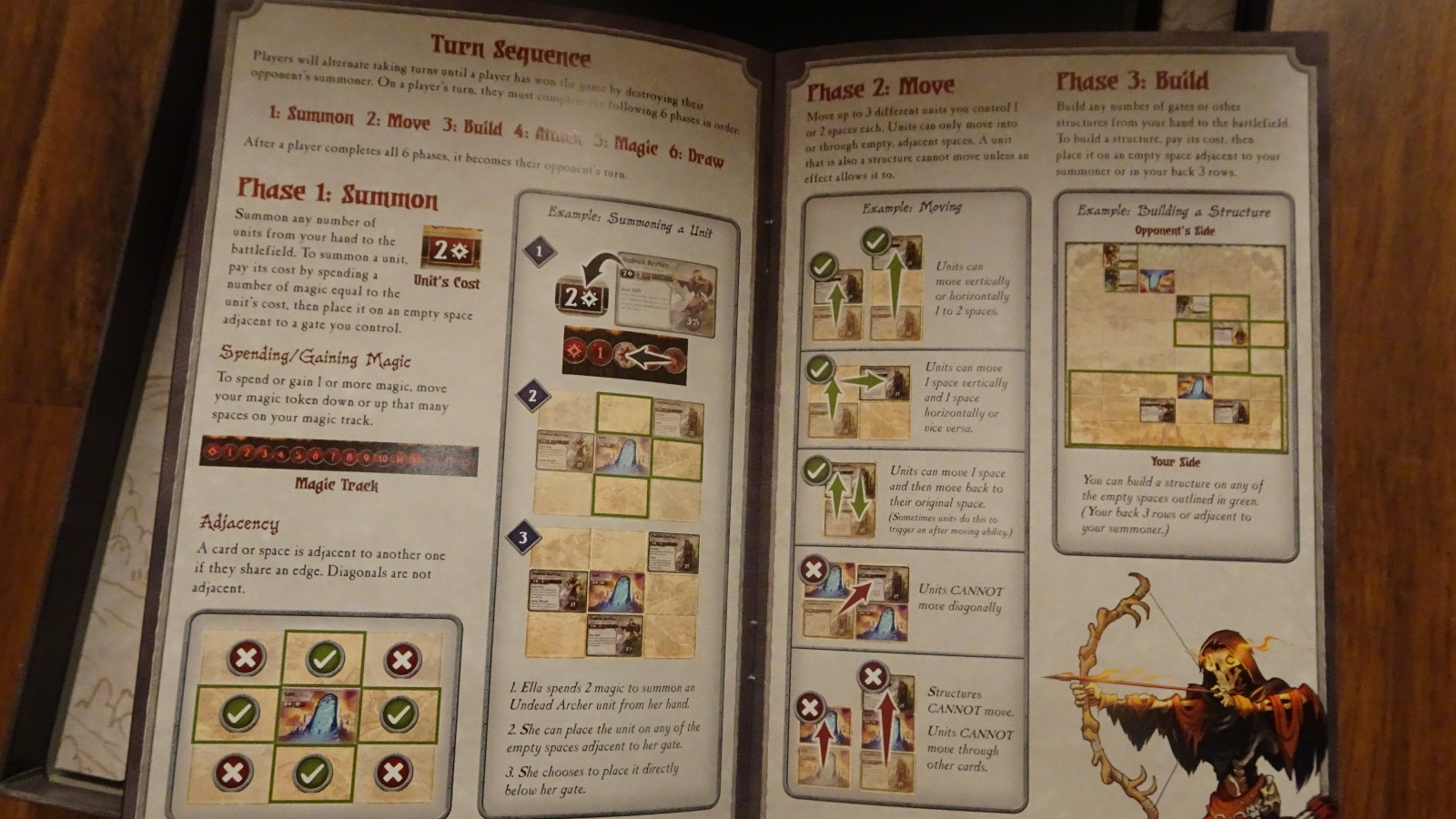 One thing Summoner Wars does very well, and they have to be given good accolades for this is how precise the language is, and mostly how good the rulebook is. Coming off a game like ‘Magic’ where the rulebook borders on a tome for how many exceptions and rulings have been added over the years, this is trim, specific and leaves little room for error. The rule book is an example of a task largely well done, with the sole blight being some ambiguity about range shots and events – an odd oversight given how clear everything else was.

Having some of these pedigrees to draw from, they have the advantage of retrospect to have a concise set of rules. As it is, the turns are very simple, so much that the instructions printed on the board cover pretty much everything that needs to happen. At the beginning of the turn, each player will have 5 cards, from here they must discard one at a time to gain manawhich can then be spent to summon a remaining card from the hand. The only ways to gain mana in this game are to discard the very limited cards from your deck, or any enemy kill gets you one mana.

As soon as you summon the creatures to the board – either next to your summoner or a summon gate – you can move and fight. Here is where the tactical element comes in of maneuvering units and getting into position. While it is interesting in theory, largely it just becomes a melee, largely positioning or facing does not matter, which is almost always a missed opportunity. Because units can fight the turn they are summoned it leads to a fun back and forth experience where one side is winning only to have the next side come back huge on their turn. This actually becomes a problem though with how swingy the game is; prepare to have your side wiped out, only to wipe their side back out. It is fun in a random way, not fun in a strategy or tactical way. 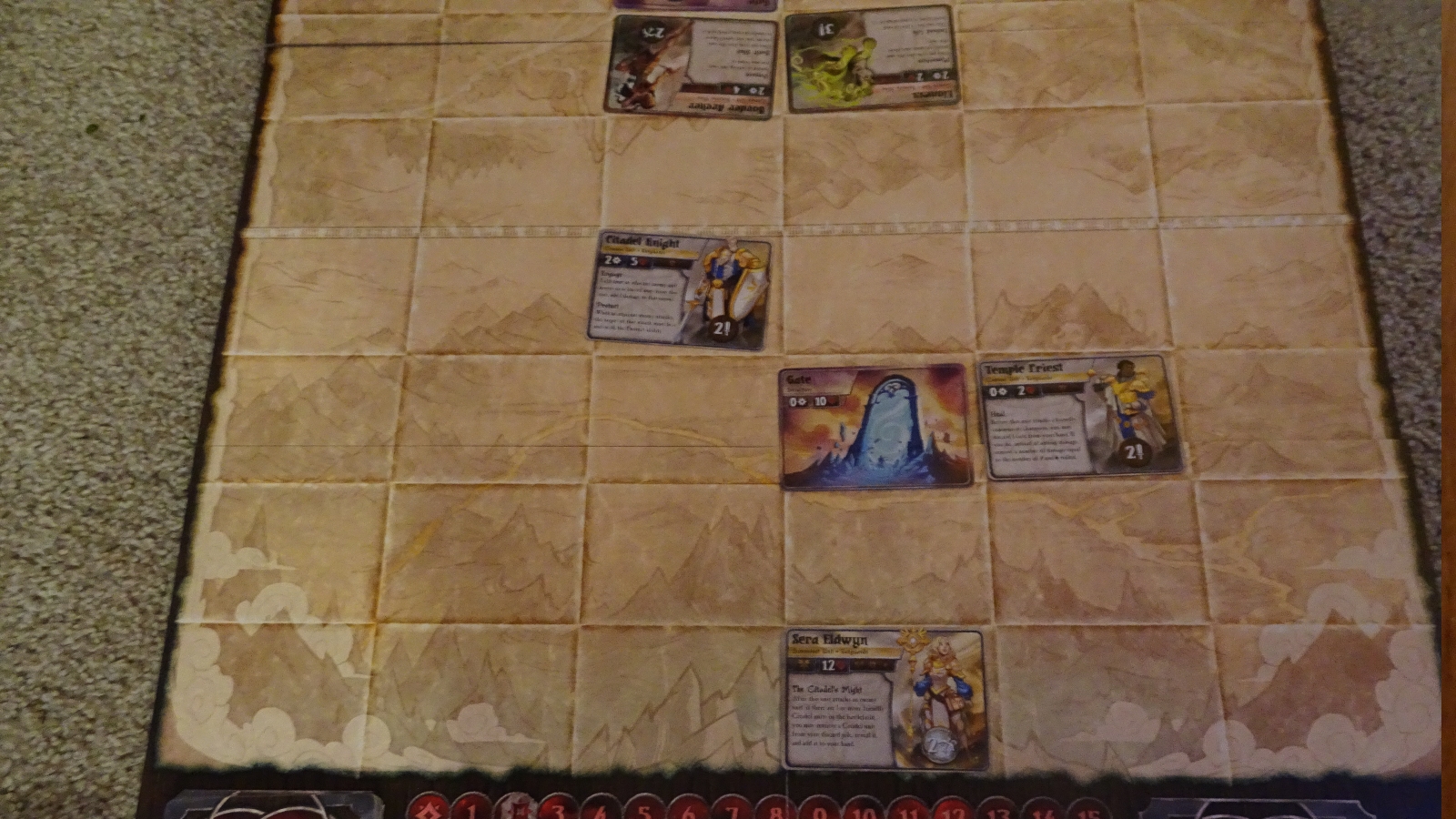 The way combat is done is simple and satisfying. Each unit has their attack value, which equates to how many dice they throw on an attack. The dice are six-sided, but all have different symbols on the faces. The melee symbol is on 5 faces, the range is on 4, and the ‘special’ is on 3 faces. So any melee attack will almost always hit for the damage, but there is enough doubt to have some degree of chance. Damage is done at a one to one, up to the unit’s life at which point they are removed from play. Range units can attack a few spots away, and the special symbols come into play with various spells, healing, etc.

Amidst all this chaos, there is a feeling that the whole experience is a little too chaotic. Yes, someone very good will know all the units and use them to the best ability, but for the most part even a basic understanding of what you are working with is good enough. It turns into a jumbled mess of units smashed around each other, and replacements being summoned in. While it might be cool to imagine small tactical battles occurring in different pockets of the board, it doesn’t happen in practice.

Adding to this, each unit has its own special rules. The core game is very easy to teach, but new players are going to be a little put off by ‘what does that guy do again’ or just get hit with some random special they forgot the unit can do. There is a little too much complexity right out the gate as far as new players, and it’s going to be intimidating simply because there’s a lot to keep track of despite the simple rule structure. 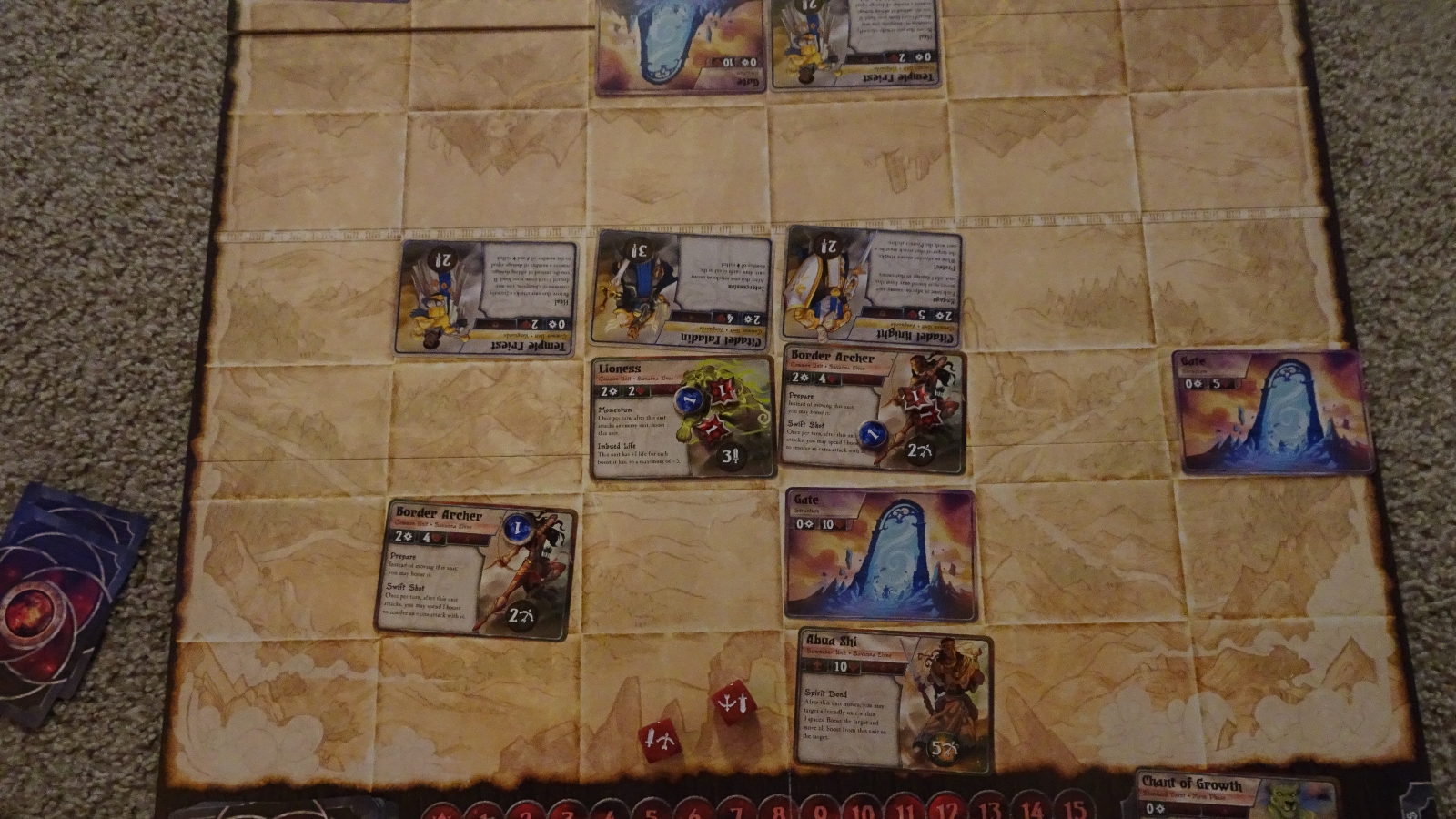 It is obvious from the sacrificing cards for mana, or the taking damage if you don’t fight the game means to inevitably drive the player towards the finish. But as a player, it is hard to not feel like these are a little ‘gamey’. In chess there are no rules that you lose a pawn if you don’t kill something each turn, yet the games still come to a conclusion. Further, it would be more interesting if there was perhaps a natural mana gain in addition to the sacrificial way to gain it, such that cards might see more use rather than burning through them. It is kind of like hurting yourself to hurt the other player more, it doesn’t feel right.

The game occupies a strange location. Largely the components and artwork are all very good. The art is highly enjoyable. The basic game rules and loop is very easy to teach. Yet, there is a feeling in the background that is hard to shake. From there being just a few too many specials taking the game beyond ‘simple’ difficulty, to the mana gain and forced damage, it is almost like the game is in an identity crisis with itself. On one hand it wants to be a deep, tactical battle, yet on the other hand a simple, approachable and quick play, and in some ways falls in the valley between them.

For a lighter version of summoning monsters and a tactical experience this game works very well. While the roots to other better known games are evident, it stands on its own as a different enough experience. Having a tactical aspect to otherwise simple card battles is largely unique and fun for that reason alone, yet the game does not leave one with the sense of wanting to haul it out over and over because it’s a little too swingy, a little too chaotic, and lacks tactical nuance.