What would you do to bring back the one you love? Legend has it that a Necromancer forged a blasphemous sword, allowing them to live forever and to raise the dead. After the priestess Koko is killed, Tama’s love, she brings her to the ancient Necromancer’s lair. Retrieving the Sword of the Necromancer and discovering it has no effect on Koko, the former thief enters the crypt to defeat the Necromancer and take their power for herself.

Sword of the Necromancer is a unique rogue-like in many ways. The titular sword allows Tama to resurrect slain monsters and summon them to fight at her side. It took me a bit to figure out, but you mostly want your resurrected minions to do your dirty work. Your character is very weak and slow compared to your foes, so it’s best to sit back and occasionally jump into the frey if needed rather than try and take everything on yourself. To encourage this, your sword attacks are slow and don’t deal much damage. It’s a very novel gimmick, and you’re essentially playing a nuzlocke run of Pokemon as you replace monsters who die once more. 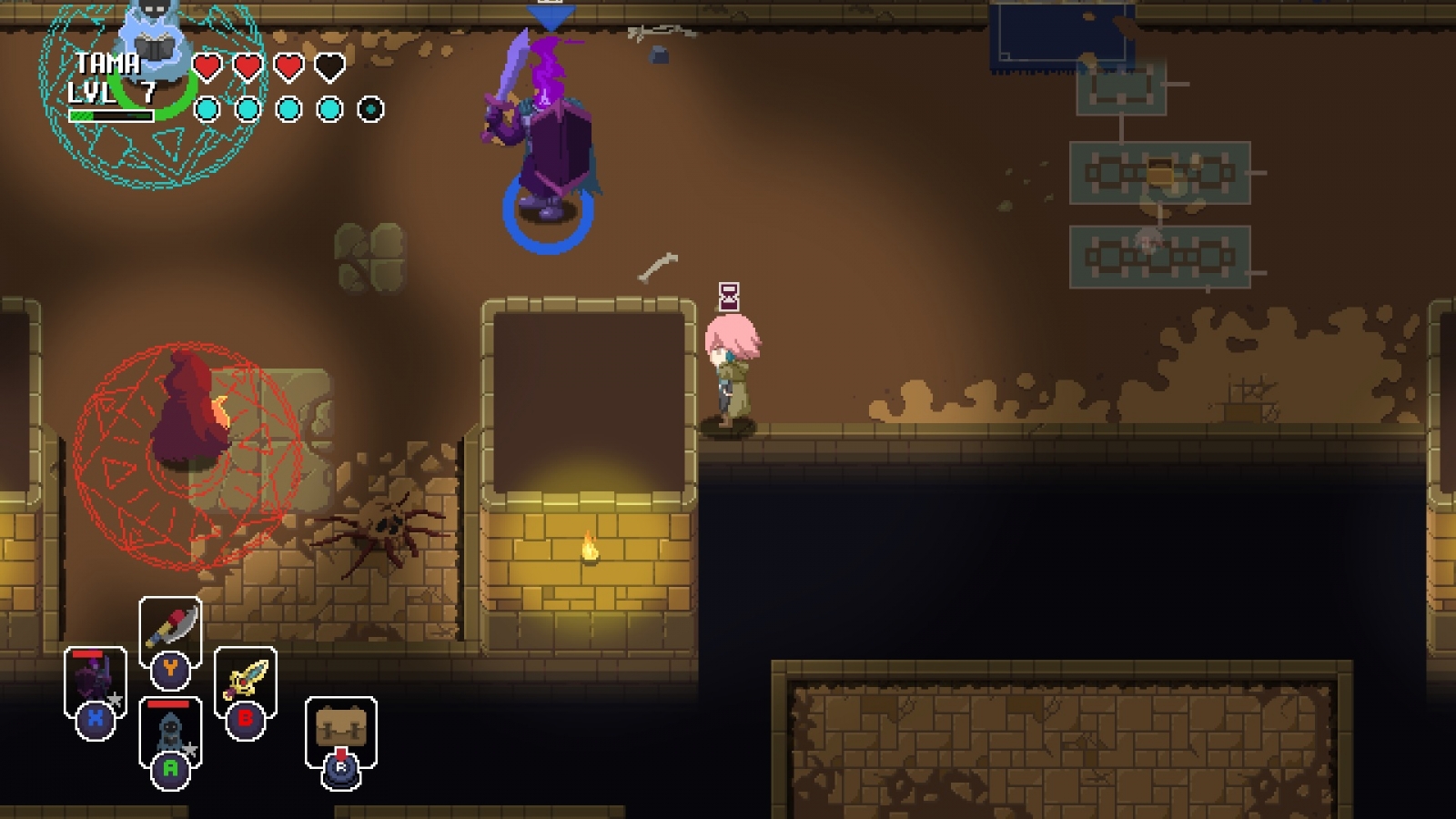 After defeating a monster yourself, you can stand above them and hold B to add them to your inventory, which then allows you to assign them to a button to summon them in battle. Leaving the room or opening your inventory will unsummon them, and given their AI is pretty dumb you will want to spawn them as close to your target as possible. Aside from monsters to summon, you can also find various equipment in the dungeon, such as more swords, spears, axes, bows, spellbooks, and more. Everything you can equip, including monsters, have attributes that either affect their attacks or your stats, for example, later on in the game I found a shield which gave me an extra heart. You can also forge some of these items at your base in the temple to add even more attributes to them, provided you have the materials. There’s even the ability to game harder for yourself by adding negative status effects to equipment.

Speaking of difficulty, Sword of the Necromancer can be as similar to the original Rogue as you want. In the options menu at your base, you can adjust various difficulty options like overall difficulty, if you lose items and levels upon death, or whether you can unsummon monsters from anywhere. Having been spoiled by Hades and wanting to progress the story quickly, I set most of these options to their easiest difficulty. 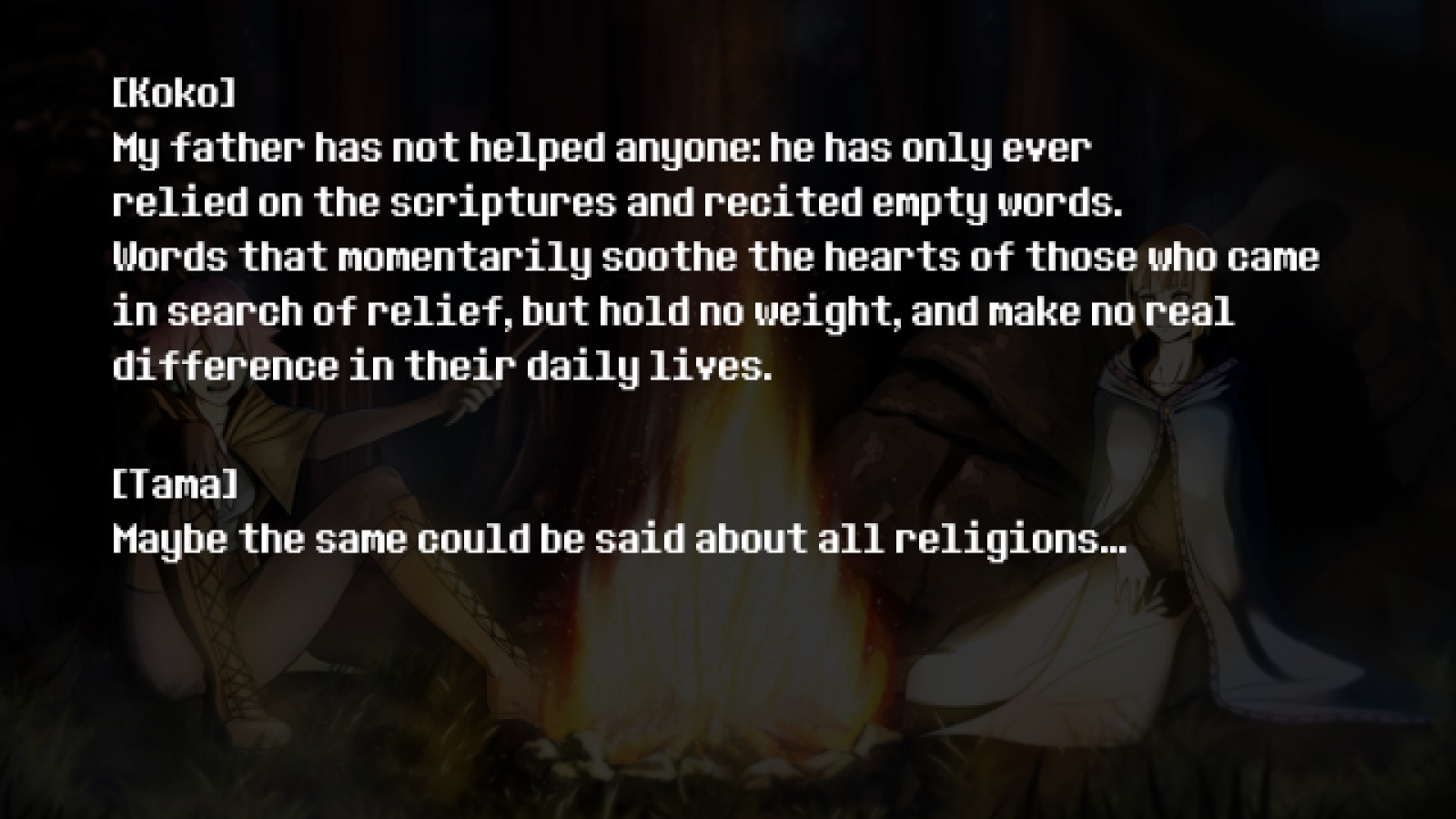 After defeating the boss at the end of each floor, you’re rewarded with a visual novel style cutscene showing Tama and Koko’s relationship before the latter died. While these moments rely a lot on anime tropes, I still really enjoyed them. Tama is a typical tsundere while Koko is naive and lacks knowledge about the world. The writing isn’t anything special, but the two actors voicing these characters really put their all into their performances and makes them instantly likable. Getting to know how they grew to like and eventually love each other feels natural and raises the stakes of the adventure.

The art in those visual novel scenes is excellent, but the character sprites during gameplay feel bland and lack personality in comparison. I think they could have used a bit more detail in some way as they look a bit flat. The music is likewise generic fantasy, save for a truly incredible track for the credits and final boss with vocals by Emi Evans, who you may know from NieR. To hear this song in its full glory though you need to beat the game three times, and during the final one you can’t resurrect any monsters. Initially I thought that run would be a disaster, given the slow and clunky sword attacks, but it was actually the easiest run by far. I had accumulated some very powerful equipment by that point so I blasted through the game once more in one try. It felt great knowing how much I had progressed from the beginning by that point.

Sword of the Necromancer

Sword of the Necromancer manages to bring something new to the flooded rogue-like genre while providing a heartwarming story. It has a multitude of options to allow players to tailor the game to their liking. It’s breadth of mechanics allow for tons of experimentation that will keep you coming back until you finally get the true ending.

David is the kind of person to wear his heart on his sleeve. He can find positives in anything, like this is a person who loved Star Fox Zero to death. You’ll see him playing all kinds of games: AAAs, Indies, game jam games, games of all genres, and writing about them! Here. On this website. When not writing or playing games, you can find David making music, games, or enjoying a good book. David’s favorite games include NieR: Automata, Mother 3, and Gravity Rush.
Related Articles: Indies, Sword of the Necromancer
Share
Tweet
Share
Submit