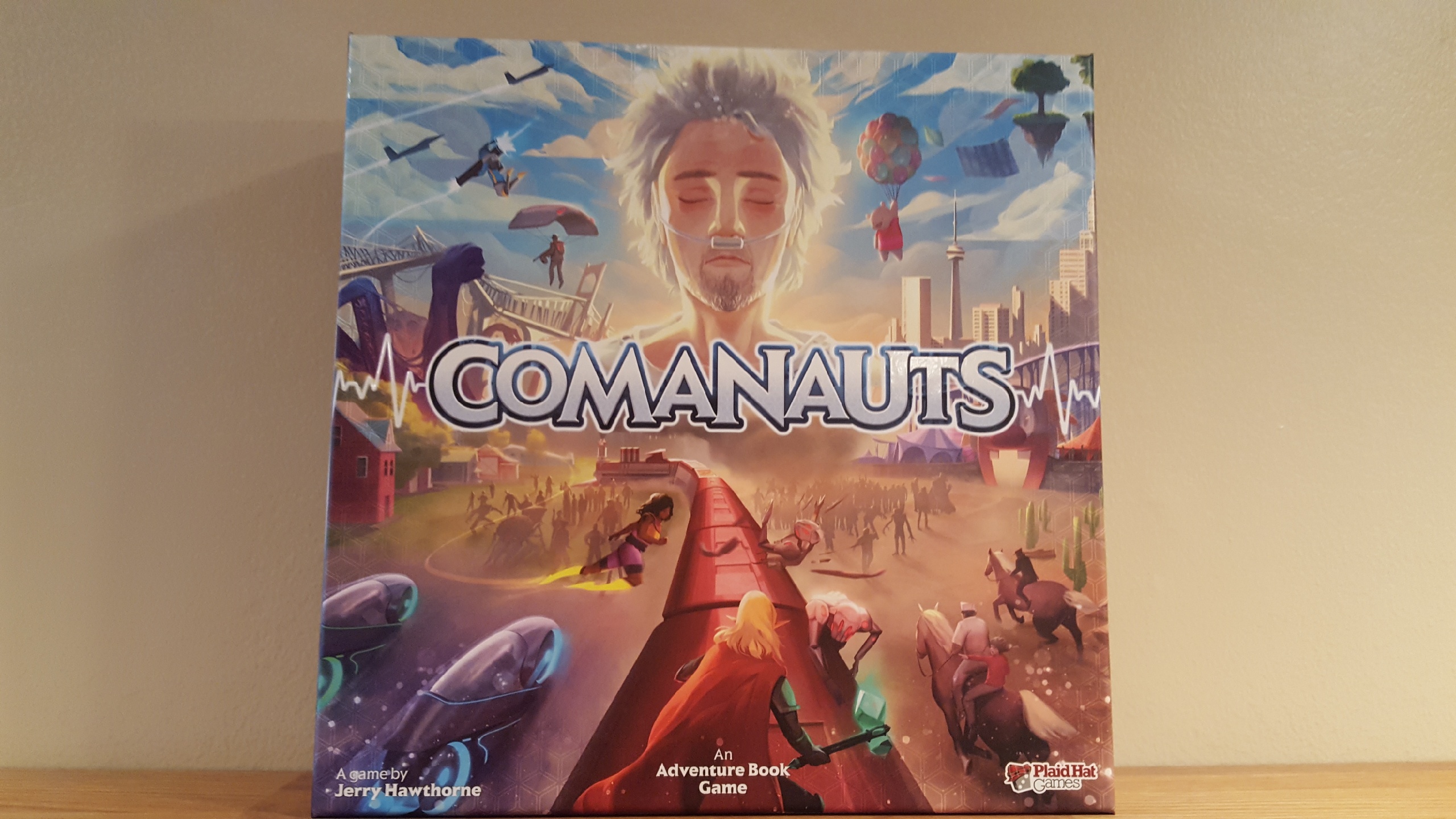 The world is in danger and the only man who has the knowledge to save everyone is stuck in a coma. How can we wake him up and get the information we need to prevent a catastrophe? Turns out using technology to enter his subconscious mind is the best course of action.

Comanauts follows the story of several brave people as they take the form of avatars while entering the doctor’s mind. Their goal is to travel through the various dreamscapes as they hunt down the Prime ID. There are multiple IDs but there is only one that holds the key to success. As players traverse sections of the doctor’s mind such as Jankyland and New Metro, they’ll encounter challenges and enemies standing in their way.

Players start off by grabbing one of the player inventory mats. These lay out sections for avatar cards, their inventory, equipped cards, clarity tokens, and more. The avatar deck is shuffled and players grab two random cards each; the cards must be left face down when they are placed in the avatar area. These are each player’s backup avatars. Once this step is done, players look through the rest of the deck and choose their starting avatar. After everyone is ready, they look through the item deck and grab whichever cards are included in their starting avatar’s item list. For example, Carl starts with a flashlight and a fedora. There are a bunch of avatars to choose from, all with their own items and effects. Characters all have their own unique effect that can be activated by spending clarity. Clarity tokens are earned by rolling for clarity each turn or as the result of some story events. 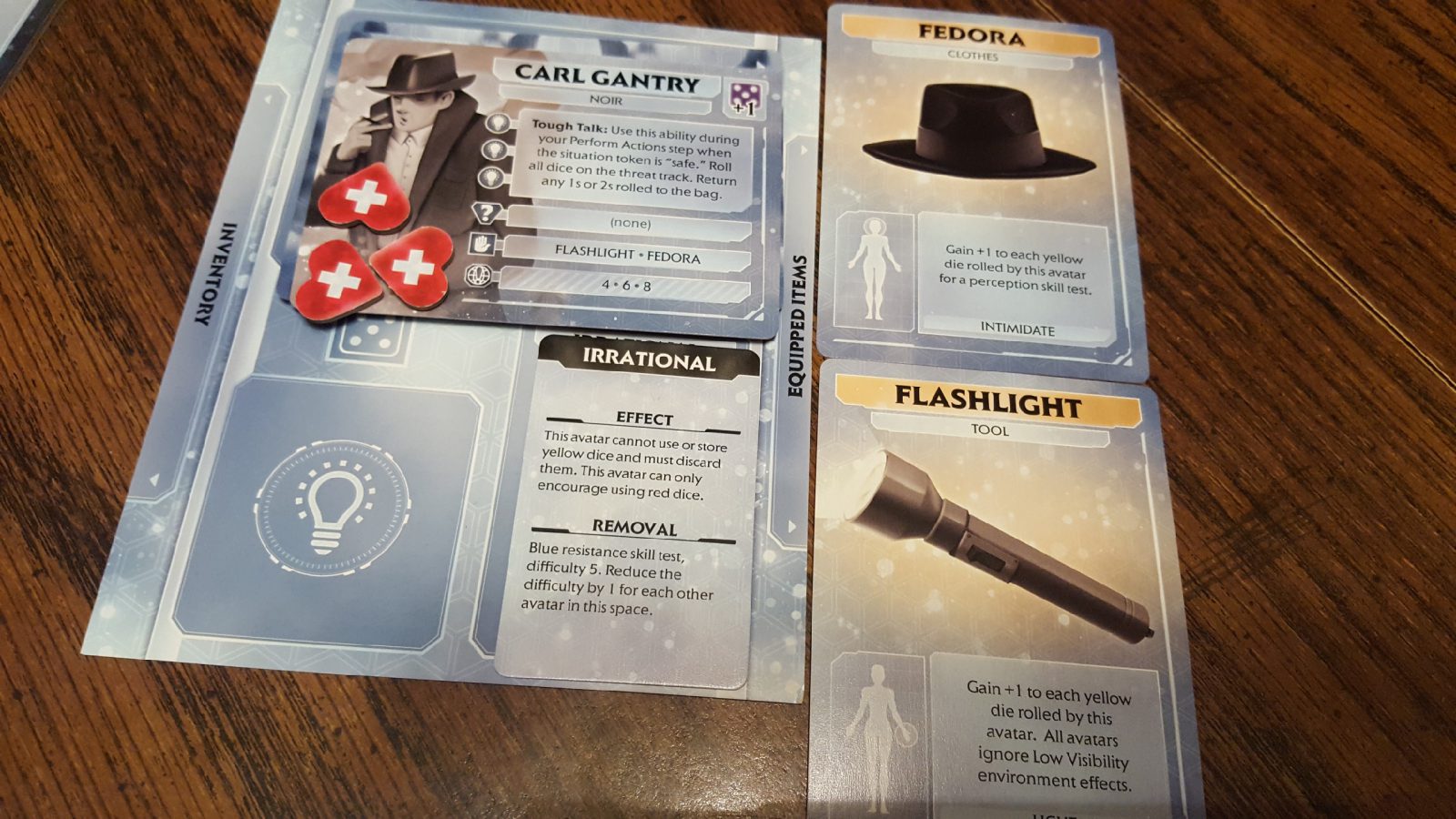 Once the player side is ready, it’s time to set up the story and IDs. First, you take the ID deck and shuffle it; then you grab five cards from the deck. These five will be the IDs that you may encounter during your game. Each ID has a comazone that they call home, so you need to grab the comazones that correspond to the five IDs. After they’ve been collected, you must select one at random. This is the starting comazone, which shows you which page to turn to in the adventure book. The fact that the adventure book is also the game board is really cool. It creates an interesting Dungeons and Dragons type of feel. Take the remaining four ID, shuffle them, and choose one at random; keep that card face down because it becomes the Prime ID for the game. Search through the clue deck for the five cards with a code corresponding to the one on the back of the ID card you just grabbed. Place those clues on top of the Prime ID and set the pile to the side. Take the other comazones you grabbed and line them up, plus place the remaining ID cards you found in a pile for later. The same thing needs to be done for totem cards that go along with each comazone. Finally set up all the various tokens that you’ll need in the game later on.

The game starts on the page of the starting comazone, which is a representation of memories and thoughts within the doctor’s mind. Players read and follow the plot and actions laid out on the pages to play the game. On their turn, a player first grabs five random dice from the dice bag. Any white dice can be rolled for clarity; if the number on the dice is higher than the number of clarity tokens you have, you grab one clarity token. Then you take any black dice and place them on the threat track of the sideboard. If four or more dice get placed on the track, then you must perform the action stated on the current page. Next you can perform actions based on the other colored dice from the bag. You can move one space for every die you discard, plus perform actions such as attacking, searching, and skill checks. Melee attacks use red, ranged attacks use green, searches use yellow, blue are for resistance checks, and purple can be used for anything. Dice rolls typically have a number that you need to roll equal to or higher in order to succeed. For combat, it depends on the defense value of the enemy, while searches require a four or higher. 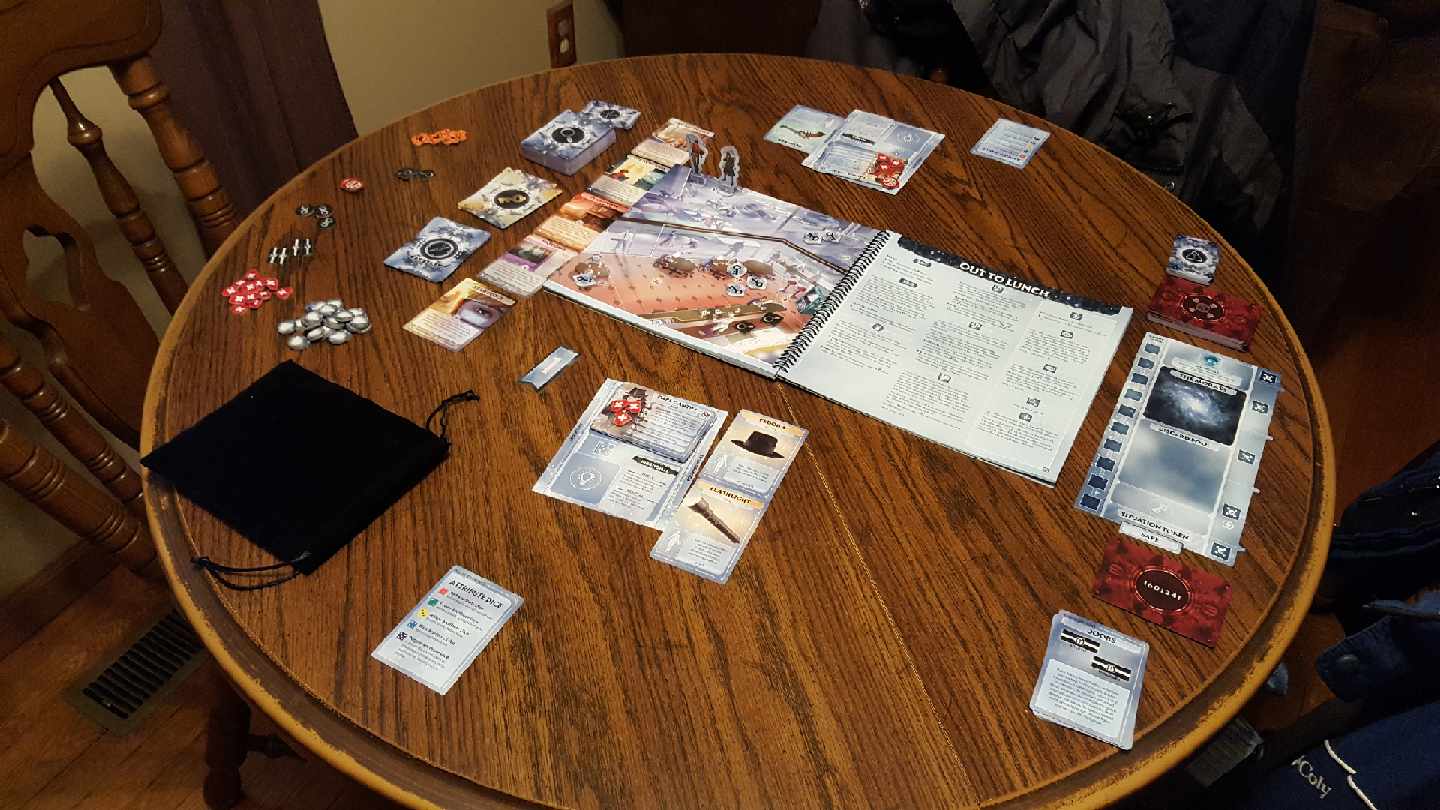 If enemies appear as a result of the plot or the threat tracker, they get a turn as well. Each enemy gets to roll one die from the threat tracker and take actions based on the number rolled. The enemy’s card lays out how many spaces they move, the range of their attack that turn, and how much damage it can do depending on the dice roll. Enemies move towards whichever player is closer to them. The defending player can roll the die that they’ve chosen to save on their card (if they’ve saved one from a previous turn). If it is higher than the value of the enemy’s attack, then the player is safe. If it’s lower than the attack, that player loses one of the three hearts that they start with. Every enemy takes a turn, which can be brutal depending on how many enemies are currently out. It can be especially bad if you don’t have a die saved or if you already lost it that turn due to a failed defense. Successfully guarding against an attack lets you keep that die, but failing causes you to discard it. During our first game, my friend got rushed by three enemies on our second turn and his first avatar was killed quickly. Sure, you get one of the backup avatars to replace your main avatar later, but it was crazy losing someone that fast.

The gameplay is reminiscent of Dungeons and Dragons, so fans of those games might be more comfortable with Comanauts. There are a lot of aspects to keep track of in the game, including items, clues, dice, effects, clarity, and much more. It can be overwhelming for some, and I unfortunately am one of those people. My friend and I followed the rules to the best of our ability, but it got to be a bit much for us. That’s not to say that Comanauts is a bad game; in fact, it’s clearly a good game, but it’s geared towards those who are more familiar with roleplaying tabletop games. There’s a lot to follow and a lot to comprehend, which I appreciate. I’m disappointed to say that I couldn’t understand everything to the extent that the creators intended, but I feel like that’s more on me than anything. On the other hand, the standee designs for the characters, the art on the cards and in the adventure book, and the designs of the cards themselves are all beautifully crafted. A lot of effort was put into them and it clearly shows. That being said, I would only recommend Comanauts to veteran tabletop players or at least those who are familiar with Dungeons and Dragons. If you’re looking to get into tabletop games, I recommend starting with something much simpler. If you get the hang of things and become interested in more complex games, that’s when I think Comanauts might be right for you. When that time comes, gear up for a journey into the dreamscape.

Comanauts is a fantastical role-playing tabletop game with some interesting concepts. The gameplay can be complex and sometimes brutal, which can be overwhelming for some players. It's geared more towards veterans of the genre.

Codi loves to play video games and watch movies. He will watch almost any kind of movie just to experience them. His ideas take inspiration from the shows and movies he watches, and games he plays. He also loves a good pun.
Related Articles: Comanauts, Tabletop
Share
Tweet
Share
Submit