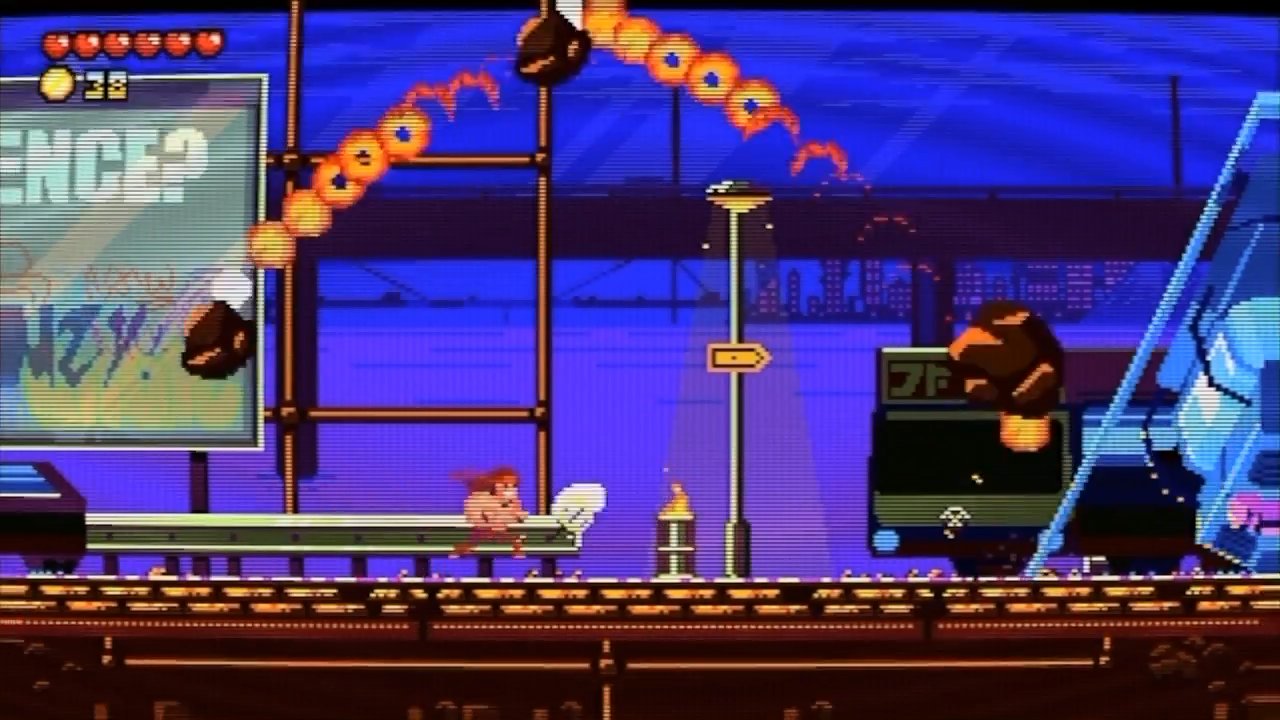 Nostalgia has long been a major part of video game culture. The 1980s and ‘90s in particular represent for many people a time when games were somehow more pure — free to challenge a hardcore audience, less corrupted by corporate greed. But this assessment, like all claims of purity, is tenuous to say the least. Hardware limitations and the desire to artificially extend playtimes were often as responsible for a game’s design as creative decisions were. There’s still plenty to love about decades-old games, and combining their sensibilities with modern mechanics can yield fantastic results (games like Rogue Legacy and Shovel Knight are a testament to this). However, taking the wrong lessons from retro games or applying their principles haphazardly can lead to a game that works as little more than homage. Despite its colorful graphics, catchy music, and satisfying challenge, Cybarian: The Time Travelling Warrior too often prizes its retro feel over enjoyable gameplay.

As explained in its opening cutscene (which is as brief and ridiculous as any mid-’90s arcade game’s), Cybarian casts you as a barbarian catapulted from prehistoric times to a far-flung future by a magic sword. From there, you’ll hack your way through a dystopian metropolis full of cyber police and weapon-toting street gangs. The action is a pretty even mix between combat and platforming, both of which are highly challenging and a bit clunky. Though you start off with nothing but a basic three-attack combo, you earn a dodge roll and a ranged attack by completing the game’s first two levels. That’s about as complex as the game gets, though, as it comes to an abrupt end within around an hour and a half. It’s clearly meant to be finished in one sitting, as evidenced by the lack of any save system.

If you want a game that feels like a long-lost SNES or Genesis title, Cybarian will certainly satisfy that itch. Its soundtrack, while not very memorable, is a solid recreation of Genesis-era chiptune and its graphics are equally authentic, though maybe too devoted to an older aesthetic to be very interesting. While I played, I frequently slipped into a sense of deja vu for the games of my childhood. Sometimes that brought back fuzzy feelings of Saturday mornings in front of the TV; others it reminded me of the powerless frustration of getting stuck on a game that seemed impossible to beat. A lot of decisions about the game seem to have been made specifically to evoke a feeling of nostalgia for older games, with much less consideration for how they’ll play out in practice.

Take the lack of a save system, for instance. There’s no good reason not to implement one, even for a game this short. You don’t have a finite number of lives, so you can start from the beginning of your current level whenever you die, but if you exit the game, you start back on the first stage. This isn’t telegraphed in any way, except for a cheeky intro screen in the style of those old “winners don’t use drugs” splash screens, warning you that “winners don’t use saves.”

To a lesser extent, the game’s difficulty overall seems to be caught in this nostalgia trap. Cybarian is a challenging game, but that challenge is cranked up and transformed into aggravation by some “old-school’ choices about how your character moves. To start, you have a three-hit combo that has to be precisely timed to work. If you try to attack out of its rhythm, you’ll be stunned for a brief moment. That’s not so bad on its own, but the range of your swings is deceptively short, so you may find yourself starting a combo, then needing to inch to the side to actually connect with an enemy. There’s also a perceptible pause around every action you take, so swinging your sword directly after moving, rolling, or jumping takes just a brief moment longer than it feels like it should. Again, not a huge issue, except that your enemies don’t suffer from the same lethargy. Mistiming an attack or movement by just a fraction of a second will leave you open to counter attack. Once you take damage, it’s easy to fall into a death spiral. You’re knocked back by attacks and stunned often long enough to take another hit. That becomes especially true when you’re dealing with environmental hazards. Platforming challenges in Cybarian frequently involve jumping from moving platforms over spouts of flames. Miss one of these jumps, and you may be knocked into a wall of fire, continuously stunned until your meager health is drained.

The game’s levels are repetitive and forgettable, but its bosses are burned into my brain. Each one presents a challenge formidable enough that they all made me want to give up on the game. That may sound like I hated the bosses — and I sometimes did as I was fighting them — but they were the best part of the game by far. One boss in particular, which can split into two at certain points, seemed absolutely impossible the first time I encountered it (and every time up until about the tenth), but slowly revealed its patterns and the highly specific ways to counter each of its multiple-projectile-spewing attacks. Others are much simpler, but still require learning and mastering attack patterns to defeat. While they were significantly more frustrating than the levels preceding them at times, they felt much more like a fair challenge. Defeating bosses provided the only sense of accomplishment the game held; fighting through the levels themselves held something closer to relief at not having to tackle them again.

All in all, Cybarian: The Time Travelling Warrior is a potentially interesting game buried under the weight of its references. Its reliance on recreating a bygone era keeps it from doing anything truly original while tying it to mechanics that fell out of fashion for a reason. It emulates a certain era of gaming without bringing anything new to the table, and its extremely short playtime will leave even players who enjoy its core gameplay unsatisfied. I can appreciate a game that rewards players for overcoming a tough challenge, but for all its challenge, Cybarian is woefully light on reward.

Cybarian: The Time Travelling Warrior is a difficult, often frustrating retro action platformer that values its old-school aesthetic over all else. Everything from its graphics and sound to its difficulty and controls recall an earlier era of gaming, but it does nothing to expand on that legacy. Players looking for a challenge may take some pride in conquering Cybarian, but its short playtime and mostly empty levels leave very little to sink your teeth into.

A committed indoor kid, Bryan moved from Pittsburgh to Los Angeles for a prettier landscape to ignore. They can be lured outside with promises of taco trucks and film festivals, and enjoy trawling through used book stores for works on the occult. Bryan has been gaming since the SNES era and is a sucker for good pixel art.
Related Articles: Cybarian: The Time Travelling Warrior, Indies
Share
Tweet
Share
Submit