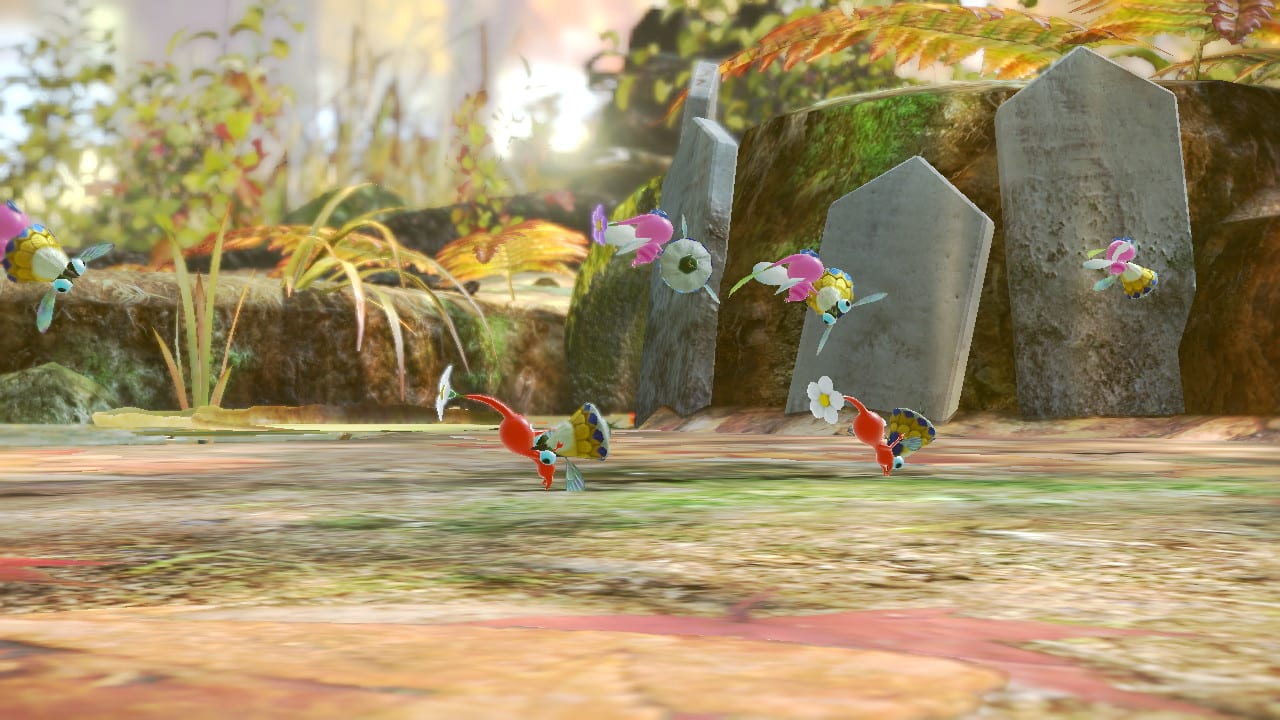 Pikmin has always been a strange series for Nintendo, as unlike their other franchises, there is almost always another entry on the horizon. Said entry also takes an extraordinarily long time to be released. Pikmin 3 was first released in 2013 on Wii U, and there was some buzz around a fourth mainline entry being worked on since even before Hey! Pikmin’s release in 2017. Now, whether to gauge interest in Pikmin 4 or bring another underappreciated title over from the underperforming Wii U, Pikmin 3 Deluxe has been released on Nintendo Switch. And unlike other ports, Pikmin 3 Deluxe underwent changes that made it the definitive way to play Pikmin 3. 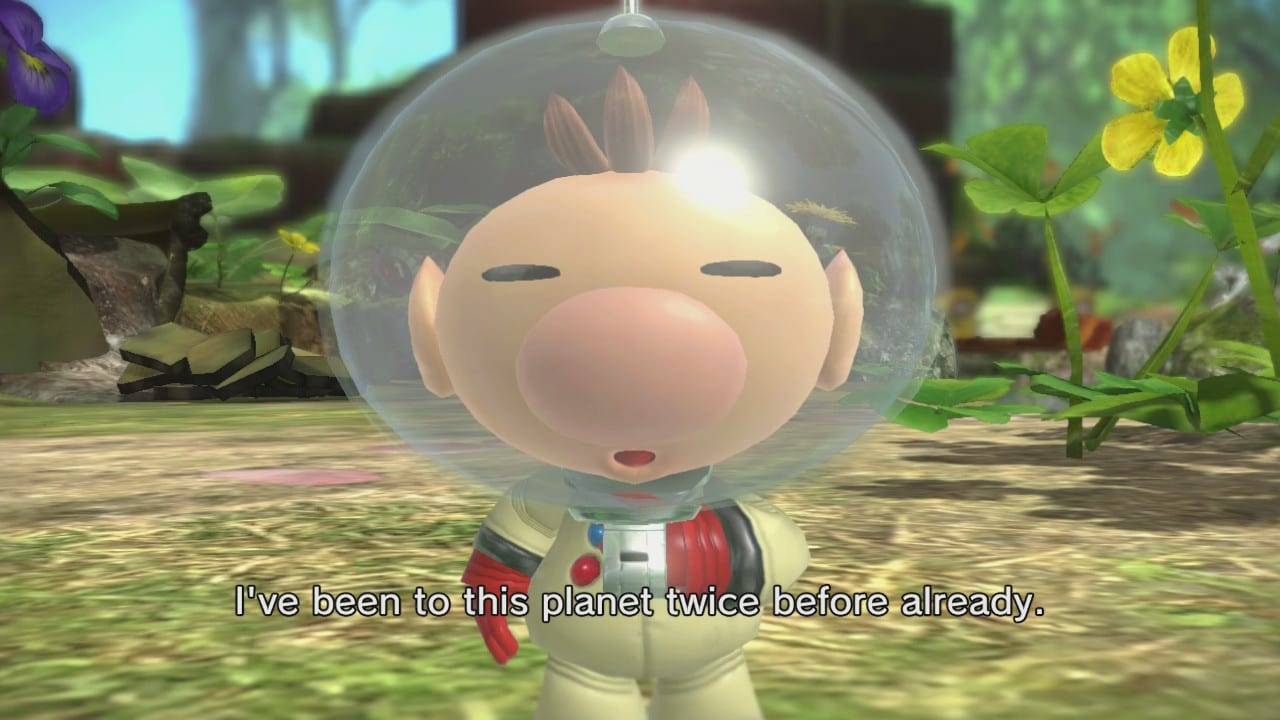 First off, I’ll have to talk about the controls, which is one of the biggest differences between Pikmin 3 and Pikmin 3 Deluxe. Buttons have been moved around, as ZR no longer calls your Pikmin, but B does. In addition, there is no button to dismiss your Pikmin, as that has been mapped to Y with a radial menu that in addition lets you choose between switching to another captain and powering up your Pikmin with Ultra Spicy Spray. It also doesn’t dismiss all of your Pikmin, but dismiss all but the group you have in front (unless they’re the only group, of course). This saves a lot of time, especially in Mission Mode which I will talk about later on.

Lock-on is leagues better than it was on the Wii U. The screen doesn’t focus entirely on the target and there isn’t an intrusive hub that makes it harder to see your Pikmin army. It’s just a simple lock-on that’ll allow you to throw your Pikmin quickly and precisely. Another change is that you don’t have to lock onto an enemy to charge your Pikmin. 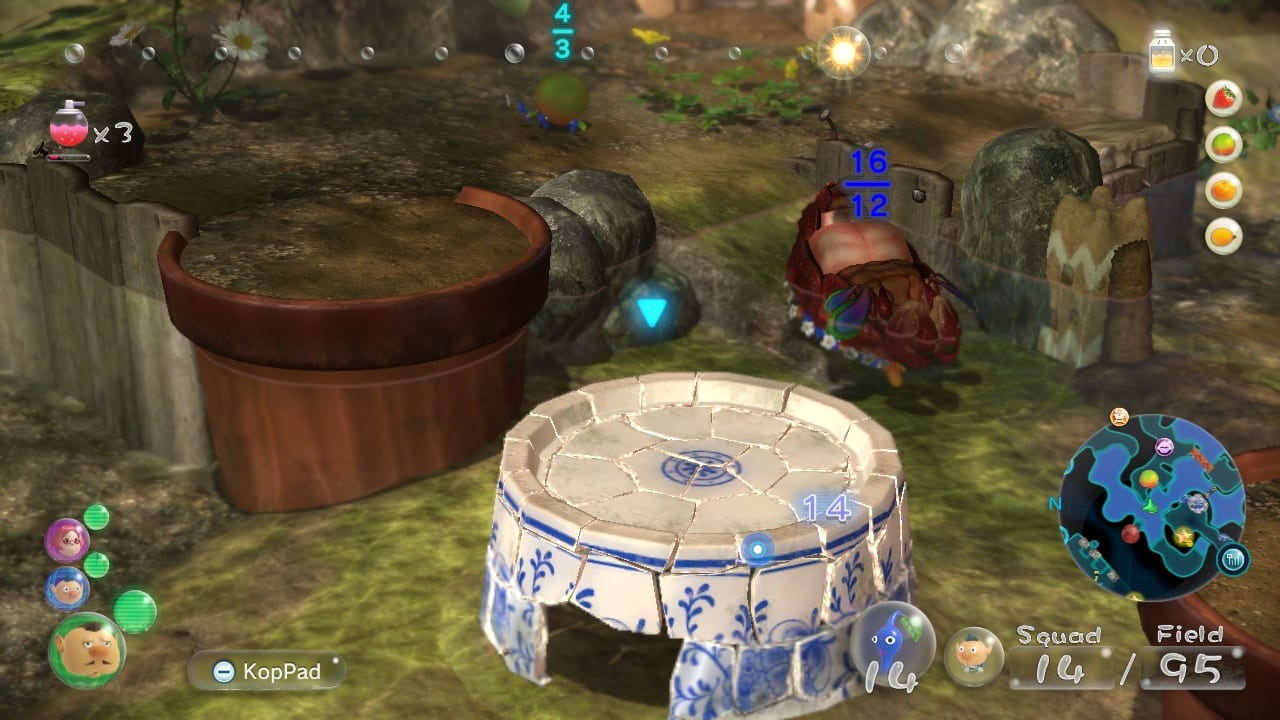 Pikmin will automatically stop at the weight number when you charge. Charging again adds more.

Charge is its own button, and locking onto an enemy first sends out only the front wave of Pikmin. I thought this would be annoying, but it wasn’t a problem at all to mash the charge button when I wanted a full-on assault. When you aren’t locked onto a single target, your Pikmin will charge towards whatever is in their path. There is a certain enemy that requires you to take out both of their eyes to expose its weak point. If you take out one eye, then take too long to take out the other, the first eye will come back. Charging in between the eyes will split your Pikmin between them and it’s incredibly satisfying to watch.

There’s also an emphasis on multiplayer this time around. Originally, you could only play with two players in Bingo Battle and Mission Mode, but this time you can play through the story and the new side missions with another player as well. It’s something I’ve personally wanted from the series since Pikmin 2 came out in 2004 when they introduced the captain switching mechanic. 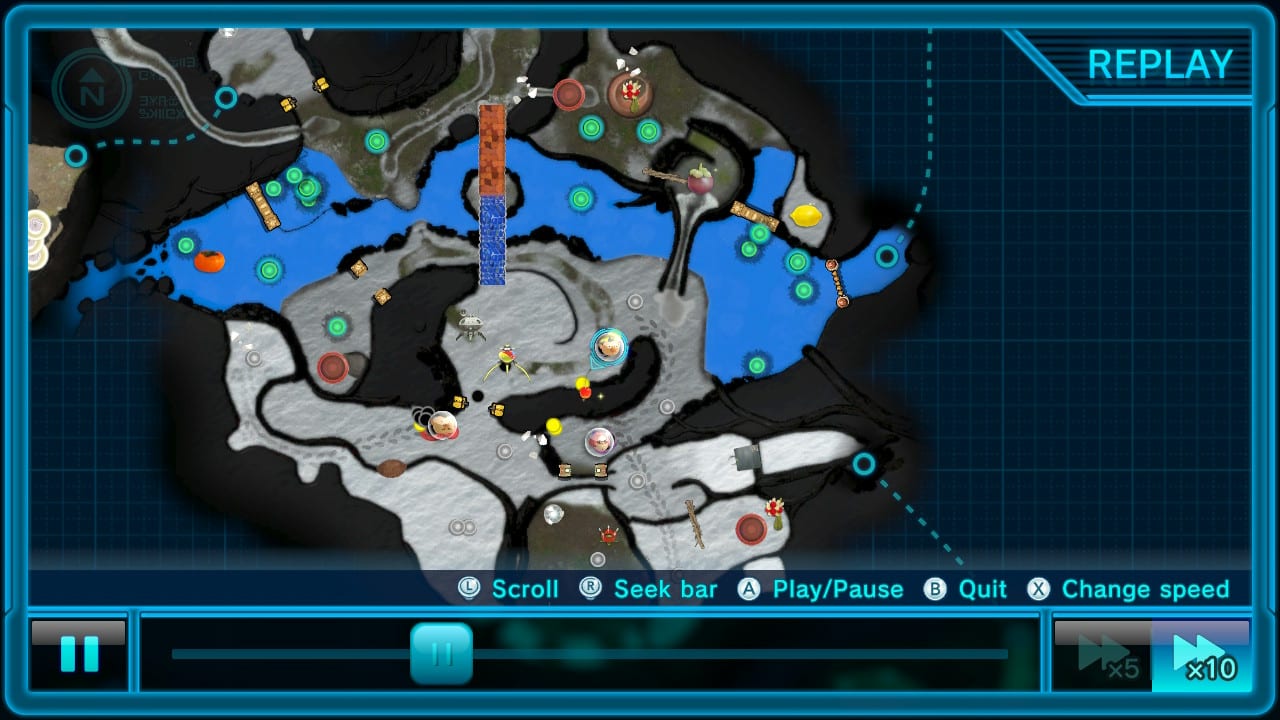 The second screen is gone, so you have to go to your map by pressing minus. At the end of the day, it’s cool to see your progress throughout that day.

The story remains mostly intact. You control three captains from the planet Kopai, which is on the verge of disaster due to a food shortage. You’ll have to use the Pikmin to collect large fruit to convert into seeds and take back to your home planet. The sense of urgency feels in-between the first Pikmin’s “find 30 ship parts in 30 days or die” and Pikmin 2’s “find the treasure to pay off your boss’s debt before loan sharks beat him up.” Though, it’s unfortunately much shorter than Pikmin 2 and streamlined. You don’t have to get a certain amount of fruits to win, you have to follow the signals and get the “Cosmic Drive Key” back to get home. Getting all of the fruit doesn’t really change the ending too much, either, making it feel less rewarding than getting all of the treasure in Pikmin 2. 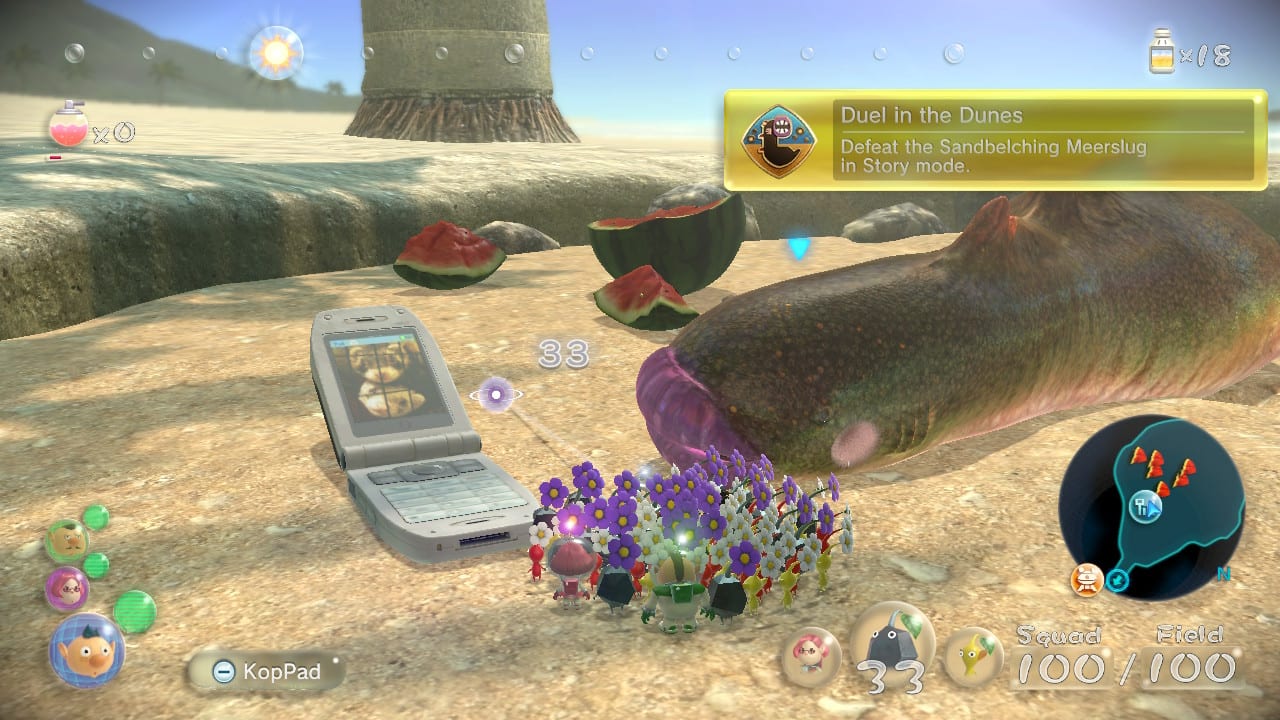 I never felt the pressure with my juice count, as save for one instance, I never had it dip below 10.

The relatively short length for story mode has some new difficulty options to compensate. At first, there are only normal and hard options, but beating the game (or playing the demo) unlocks Ultra Spicy difficulty. Normal is more of an easy mode, consisting of longer days and weaker enemies while hard is closer to the Wii U version in terms of difficulty. Though, it felt like enemies were still easier to take down, especially ones armored that require you to throw rock Pikmin at. Ultra Spicy difficulty changes things a bit, taking all of the changes with hard mode while limiting the maximum number of Pikmin on the field to 60. With this and the fact that you get less juice from fruit, which you need to drink every day to progress to the next, it felt down to the wire every day while I had to fight between finding fruit to give me more time to accomplish the main goals and going straight to the end. 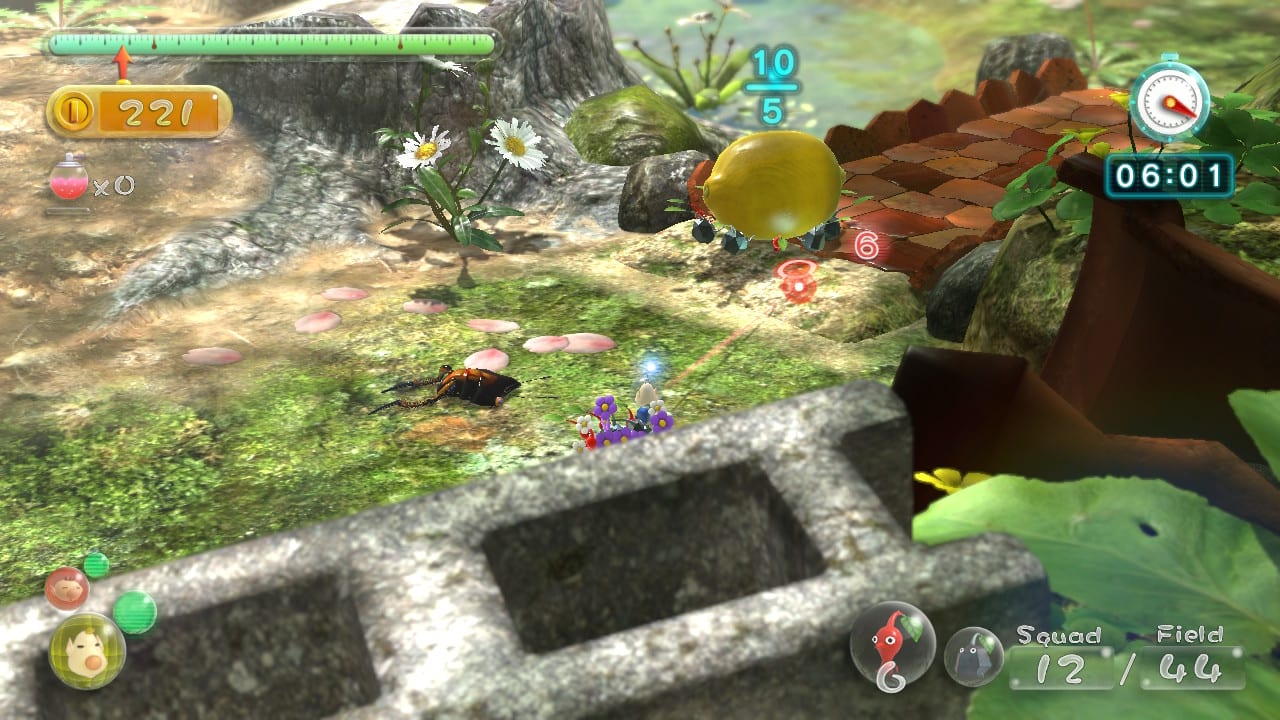 Honestly, it just feels good to play as Olimar and Louie again. They’ll even have little moments of monolog where you can learn more about them.

To help fill in the gaps in the story, Pikmin 3 Deluxe contains “side stories.” These consist of a short burst of mission-based levels that take place during the main story and a longer epilogue where you control the protagonists of Pikmin 2, Olimar and Louie. Nintendo repurposed the secret “Olimar log” videos from Pikmin 3 and put them in the side stories while giving the epilogue entirely new scenes and assets. These were nice, but I was hoping they’d at least tease Pikmin 4. In the end, they felt like glorified Mission Mode levels. 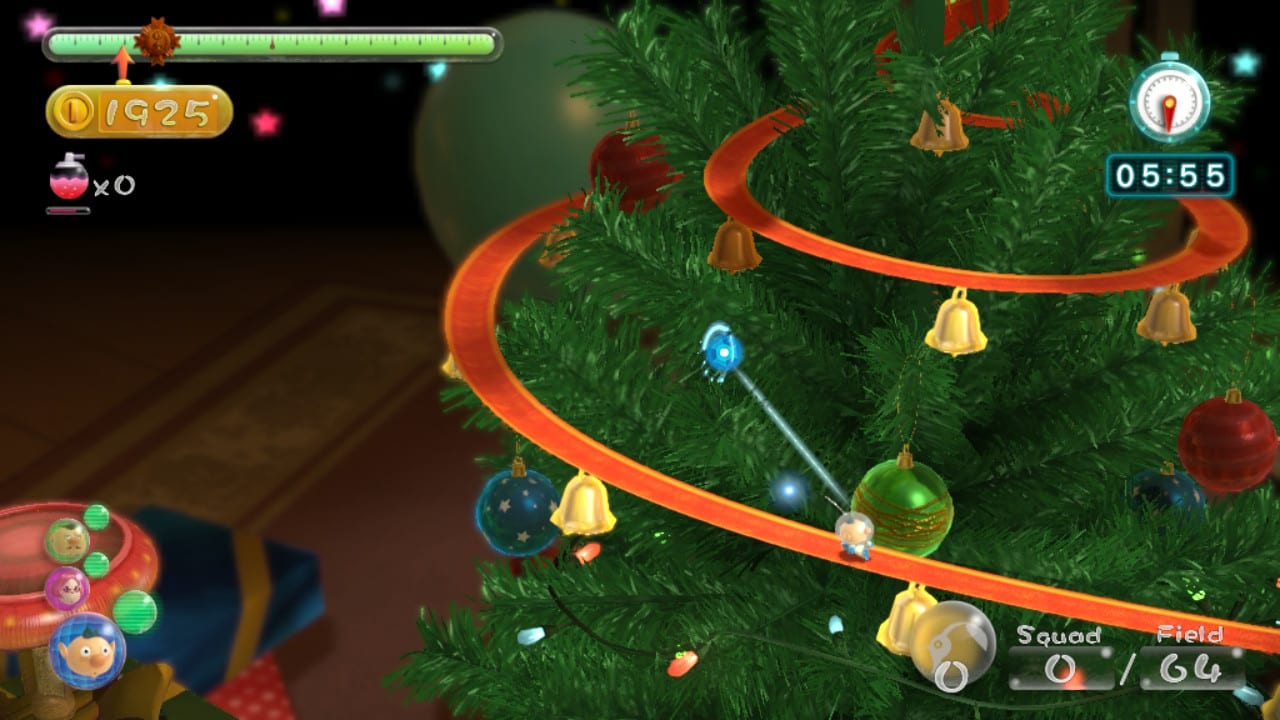 This mission was originally DLC. Playing it on Halloween was… interesting.

This isn’t a bad thing, Mission Mode is fantastic. There are three different kinds of missions: collect treasure, battle enemies, and fight bosses. Collecting all of the treasure or beating all of the enemies before the timer runs out gives you a platinum medal, while the medal for bosses is determined by how fast you beat them. Missions are addicting, and I can’t help but try over and over again to get a platinum medal. Even when I get that elusive medal, there is a global ranking board that shows the highest score, as you get bonus points for time remaining. And if you fail to collect or beat everything in time, you can go into “After Hours” mode to finish up the map to get experience in planning your past path.

Then there’s Bingo Battle, which I, unfortunately, didn’t get much time to toy around with. Bingo Battle is a two-player battle mode where each player will try to collect certain objects to fill out a bingo board. The first bingo wins. It can be fast-paced and there is room to sabotage your opponents, but the issue is that it’s only local multiplayer. During this pandemic, it’s difficult to find players willing to play from my home, so it would have been nice if they upgraded this mode to be playable online. 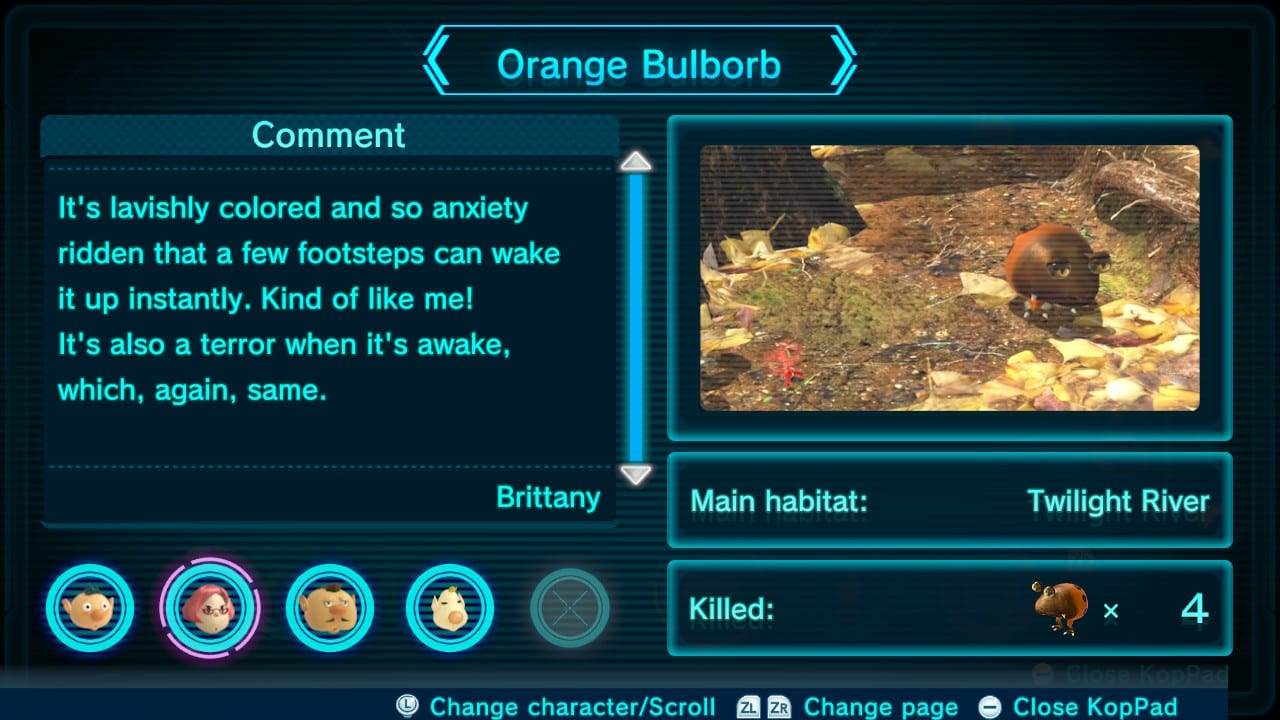 Brittany’s are always charming. This was one was one of my personal favorites.

Another addition to the game is personally one of my favorites, the Piklopedia. Returning from Pikmin 2, this has every captain in the game remarking on every creature they encounter. Alph, being the engineer that he is, often talks about the structure of the creatures and their weakness, while Brittany’s are a little more silly. Charlie will often talk about the creature’s fighting power, being the strong captain he is. The other two are unlocked over time, but they are equally enjoyable. 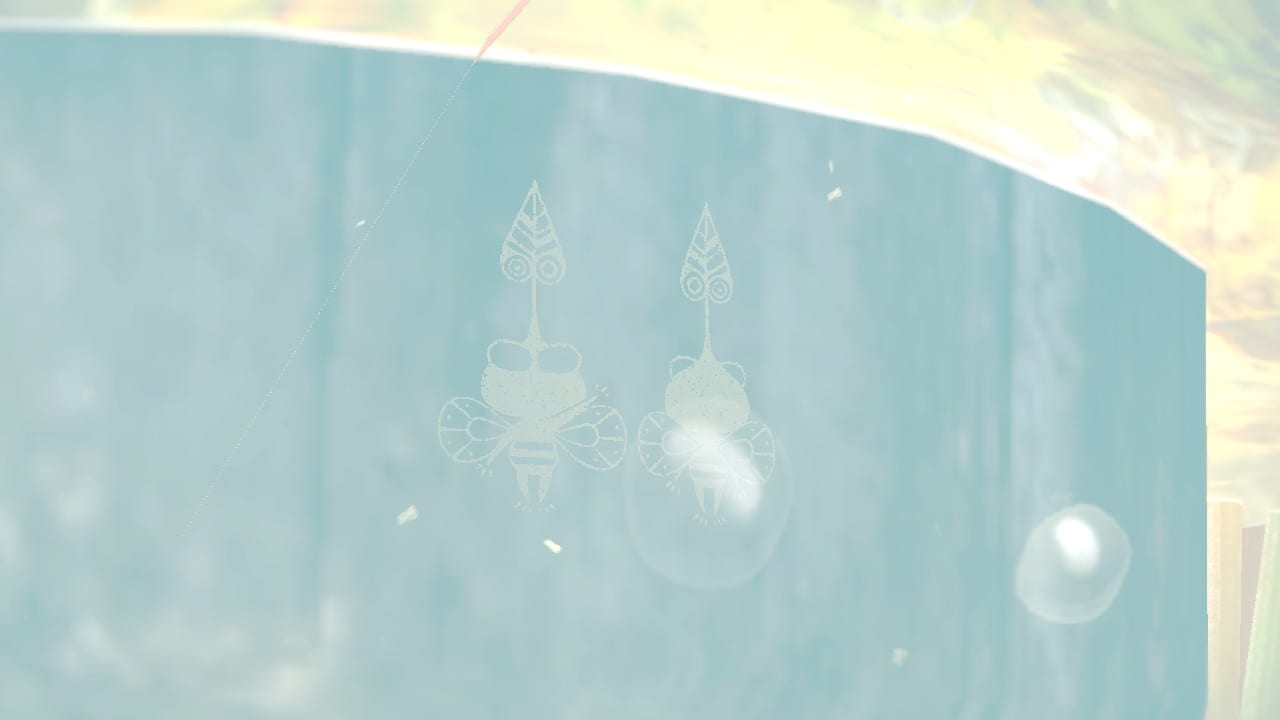 There are a lot of these murals hidden around the world, and finding all 15 gives you a badge. They are hard to spot.

Lastly, the game has an achievement system in the form of badges. As you accomplish tasks, such as complete missions or grow a large amount of Pikmin, you’ll unlock badges. There are different categories ranging from story to multiplayer, and some are simple to get, but there seems to be a problem with them currently. Upon beating the main story, I earned a badge for it. However, when I went back into the game to read the Piklopedia entries I unlocked in the final area, the badges were missing along with the progress on some of the collectible ones. What’s worse is when I went back into the Piklopedia, the final boss was missing as well. I had to refight the final boss to get everything back. This is something I’m expecting to be patched out at a later date, but as of now, it’s annoying.

Pikmin 3 Deluxe seamlessly translates from a two-screen experience on the Wii U to a smooth experience on the Switch. If you’ve never played it before, I’d recommend doing so now. It’s one of the only ports from Wii U that I think is worth the full retail price of $59.99. Here’s to hoping that the next time we see captain Olimar, it’s Pikmin 4.

Pikmin 3 Deluxe is truly the definitive version of Pikmin 3 with plenty of additions and quality-of-life changes that will make it difficult to go back to the original Wii U version. The side stories provide creative level design that was missing from the base game, all of the DLC missions are present, and the story can finally be played entirely with two players. Even if this doesn’t lead to a Pikmin 4, it would be a great high point to end the series on.

Sean Anthony likes to combine two of his passions: gaming and writing. Gaming has been a huge part of his life ever since he played his first game as a child, Kirby's Adventure. He aspires to have his name attached to an article that makes the whole world go, "Huh, that's neat, I guess."
Related Articles: Pikmin 3 Deluxe
Share
Tweet
Share
Submit