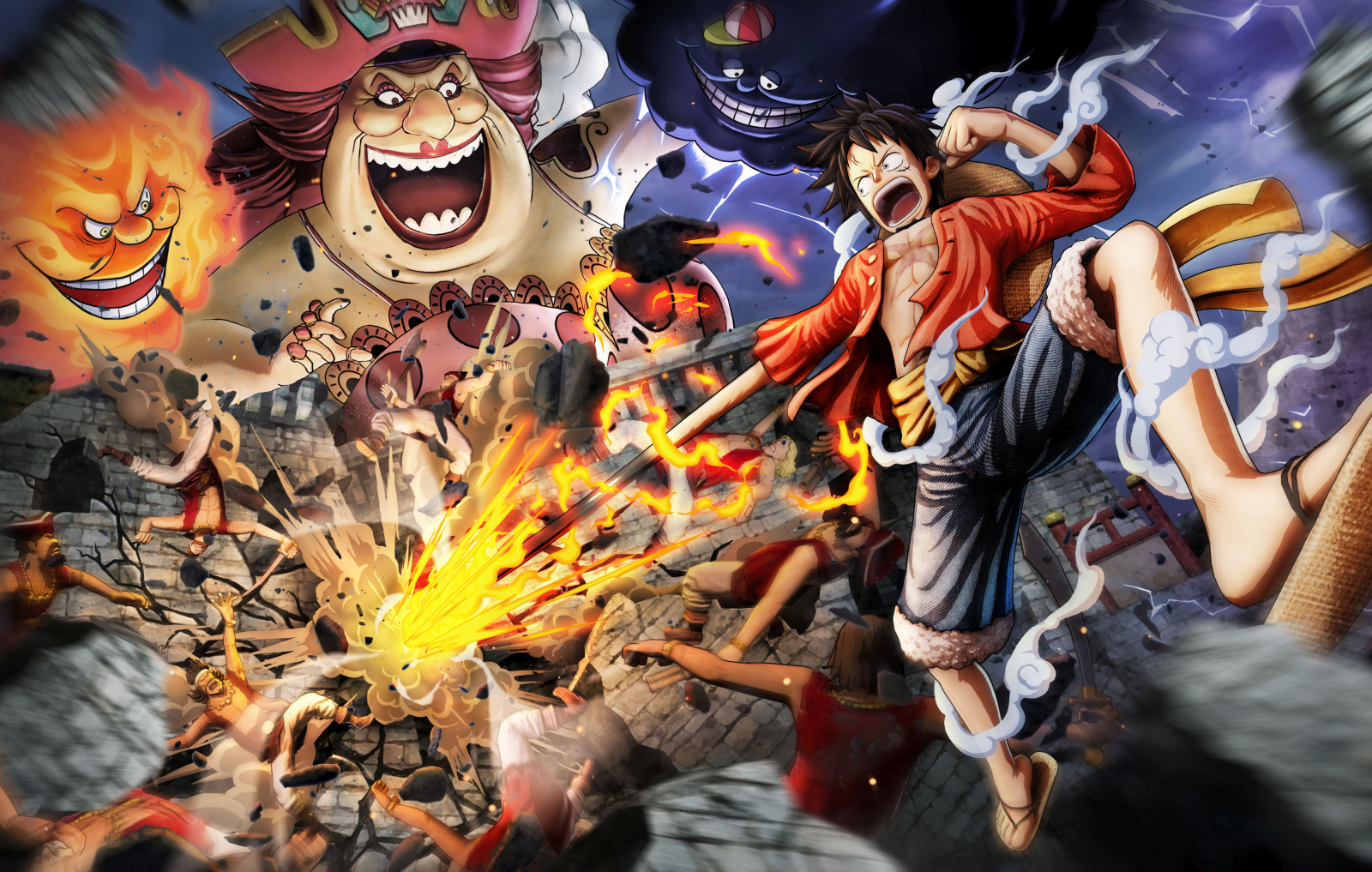 There’s nothing more satisfying than crashing through hundreds of booty looting pirates while unleashing high-count combos. One Piece: Pirate Warriors 4 brings all the familiar faces of the series and its stories and builds upon them in only a way One Piece can. Like all Musou games, this one doesn’t break the mold as far as trying to remix the formula. It builds upon what the previous games in the series have done and turns up the action.

One Piece: Pirate Warriors 4 is more than just another adrenaline boosting button masher in the series. It introduces new game mechanics, modified modes, characters, and the ability to cram hours of One Piece storyline into roughly 17 hours of gameplay – and it does it fairly well. Like the anime, you experience the One Piece story from Luffy and the Straw Hat Pirate’s point of view, and sometimes their well known foes. Like Pirate Warriors 3, three game modes are available, but have been renamed and enhanced to fit the tone of the game. Dramatic mode is where you get to experience the story and all of its glory, Free Log gives you the ability to select different levels to play without the need to listen to the banter of the story, and Treasure Log offers episodes that are divided into ranks. More on that later. 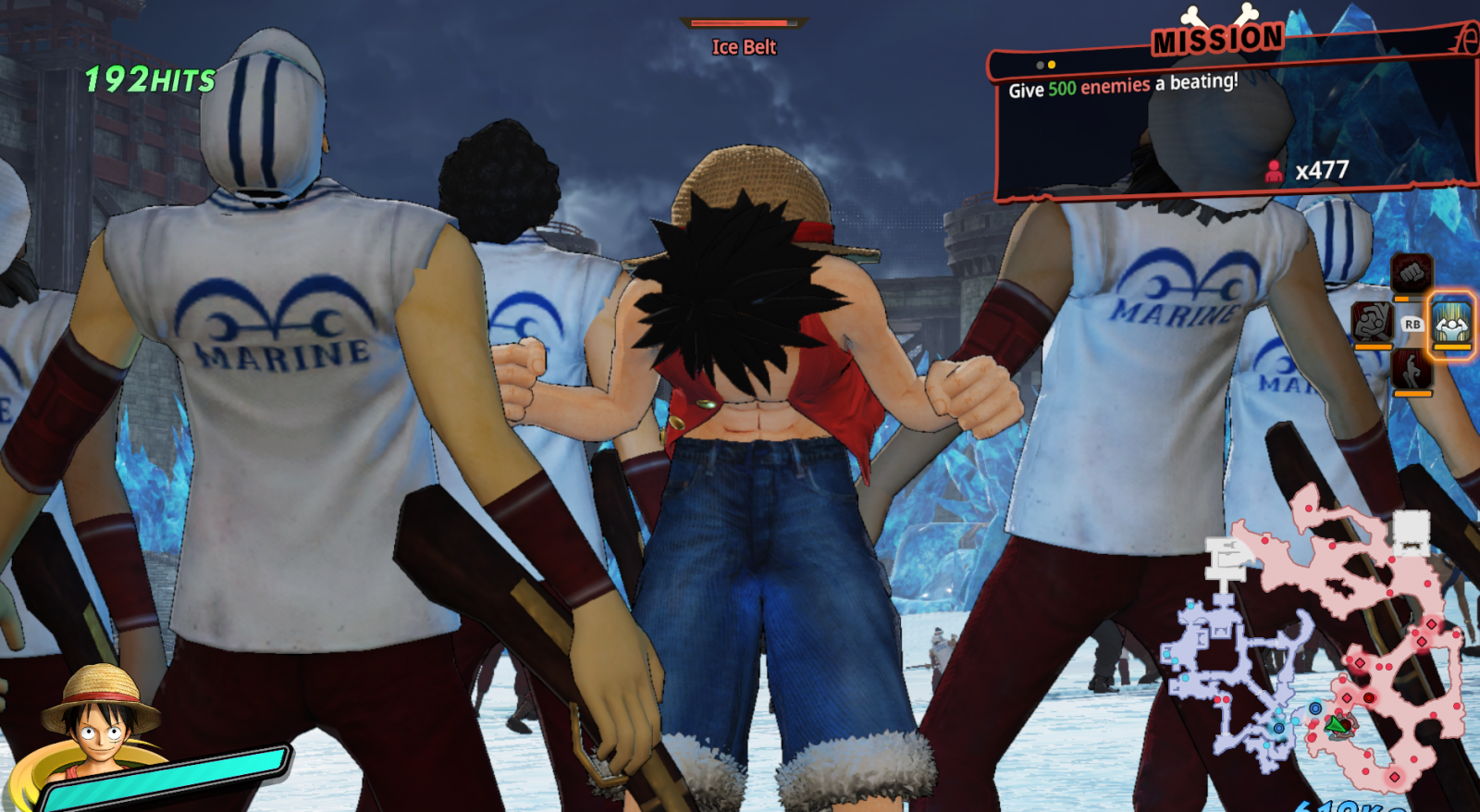 A one man army

A lot of thought went into crafting the story to make fans of the series and newcomers feel like they are experiencing the anime and taking part in the ongoing saga. From the original voice actors, character’s personalities, and art design that mirrors the anime, the game is a chip off the old block. Diving into the story mode, I was blown away at the different ways the narrative designers and artists chose to tell the story. Much of the story is told through directed cutscenes, in-engine cutscenes, still images, and some in-game dialogue. The animations and visuals aren’t the best, but it never takes away from the gameplay. One of the detractions for me was the length of the cutscenes. Often feeling like they would never end, much of the dialogue felt like banter and never felt like it was driving home the point of the conversation between the characters.

Jumping into battle, regardless of the character you choose (usually you will be given a choice before starting the mission), you will be accompanied by a few of your Straw Hat cohorts. While you will be doing most of the heavy lifting, it does add something to the gameplay to see friends fighting alongside you. There’s a lot of dialogue that takes place as you pummel thousands of pirates yelling shiver me timbers. Unfortunately, because this is a fast-paced game, much of what’s said gets lost. And that’s where my first complaint comes in. The User Interface is terribly dated –feeling like a circa-90’s imported Japanese game. 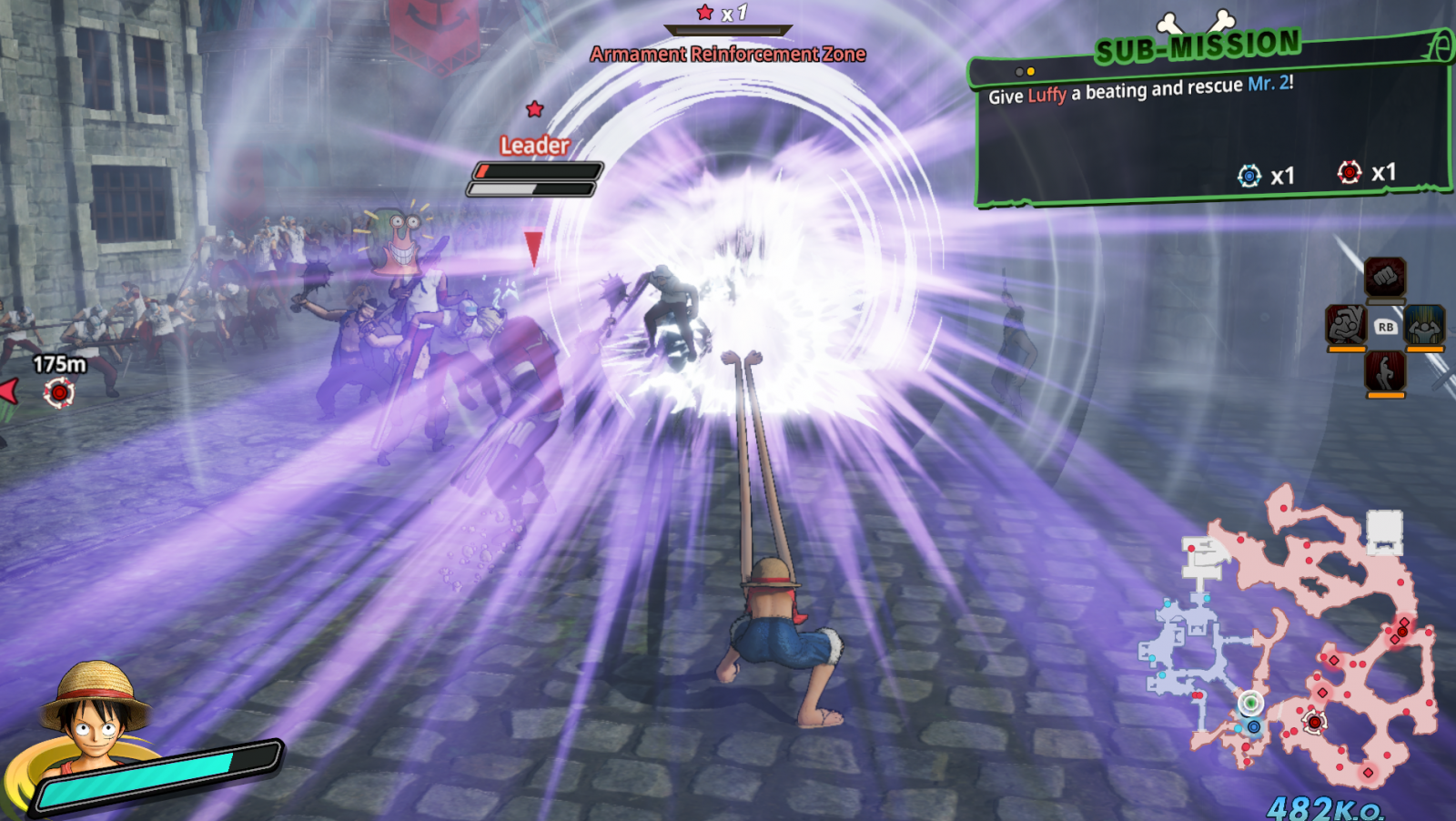 Long arm of the pirate law

The mini map in the lower right corner of the screen can become a complex network of unbeaten paths as you get to larger stages, making it difficult to decipher objectives. On top of that, the UI becomes crowded when character bubbles pop up while you’re trying not to get jumped by a hundred looting pirates. Once I started the game, I was expecting pop-up windows explaining different mechanics, attack moves, and other important information within the first few moments of battle, but to have them interrupt my gameplay after I was over two hours into the game felt intrusive and counterproductive.

Each chapter you complete takes you to familiar locales that fans of the series will know. There’re also some new places made just for Pirate Warriors 4 to keep things fresh. Though games in this genre can feel a bit shallow and repetitive, there’s enough here to keep you playing. As you progress in the game, you will earn required materials to level up characters. You’ll also collect coins that allow you to level up health, attack, defense, and stamina, so that you can keep up as the enemies get bigger and stronger. 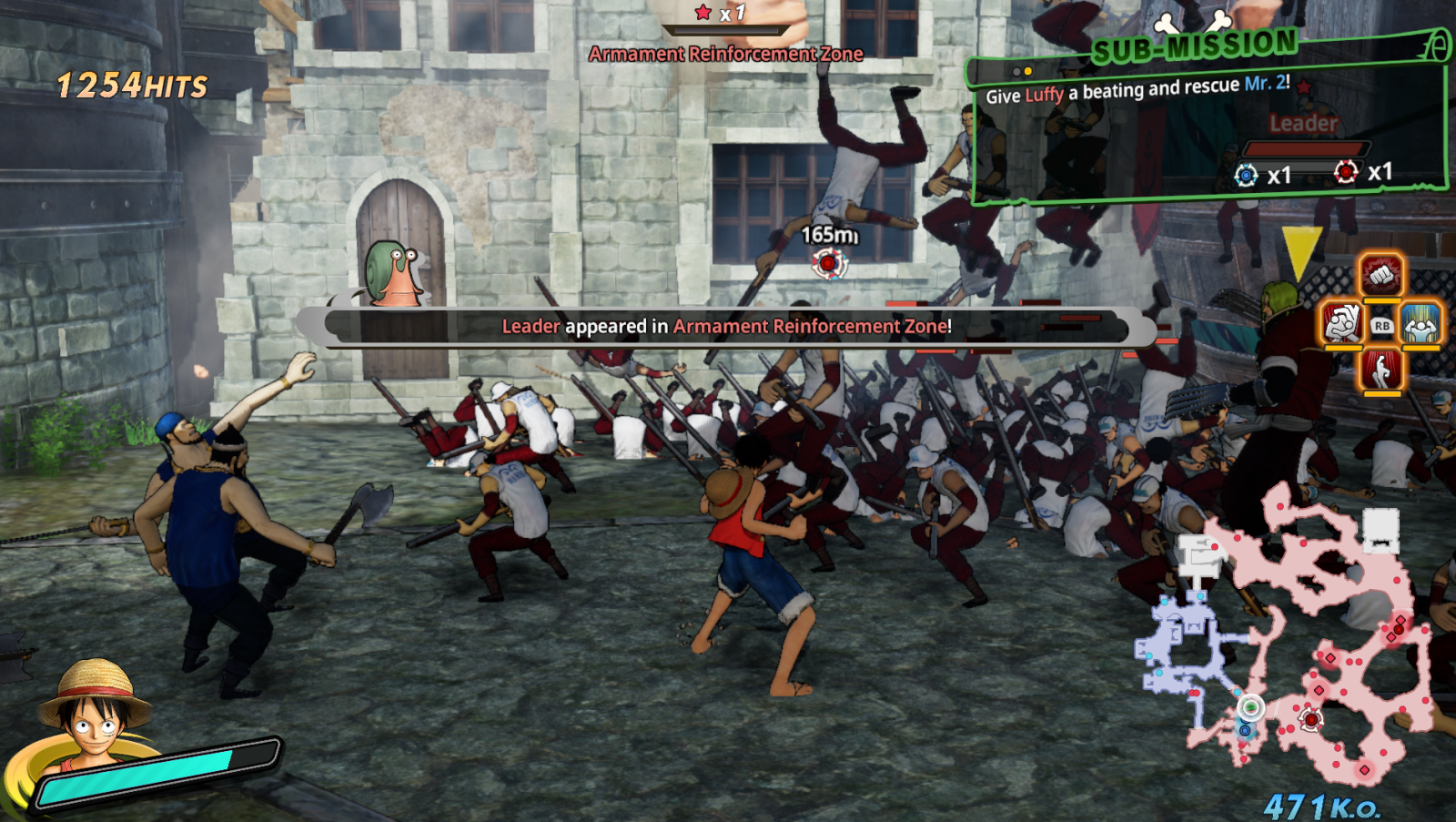 Bring on the minions

When knee-deep in the fight and you’ve got enemies cutting off your advancement, the enhanced and revamped combo system feels stronger and more fitting for the combat this go around. Now you can string combos together on the ground and lift them into the air, continuing the combo to a gratifying finish. The world around you is also destructible and can cause damage to enemies when buildings and other objects crumble down on top of them. This definitely helped me when I was fighting some of the bosses and commanders, giving me some extra oomph when I needed it. The combos and hits feel smooth and responsive. Every punch, kick, headbutt, and building leveling attack feels intuitive and lands as expected, even when hundreds of bandana wearing pirates are taking up most of the screen. With over 40+ characters to play, including heroes and villains, each character feels unique and has the personality of their anime doppelganger.

Where the combo system excels and pushes gameplay in the right direction, the camera’s ability to stay locked onto enemies and remain in an adequate location is the game’s Achilles’ heel. I can honestly say that this is one of the worst experiences I’ve had with an in-game camera. Locking onto a boss or high-level pirate is supposed to give you a leg up, but it often trails behind you or gets stuck on objects in the world. Also, moving too quickly and changing angles will also cause the camera to move to an awkward angle, leaving you to reset it or move it yourself. When I was fighting multiple bosses at once, the lock-on camera would automatically switch to another boss in the field, leaving me open to attacks, not to mention making me look like I was shadow boxing since I was no longer locked on to the closest pirate. 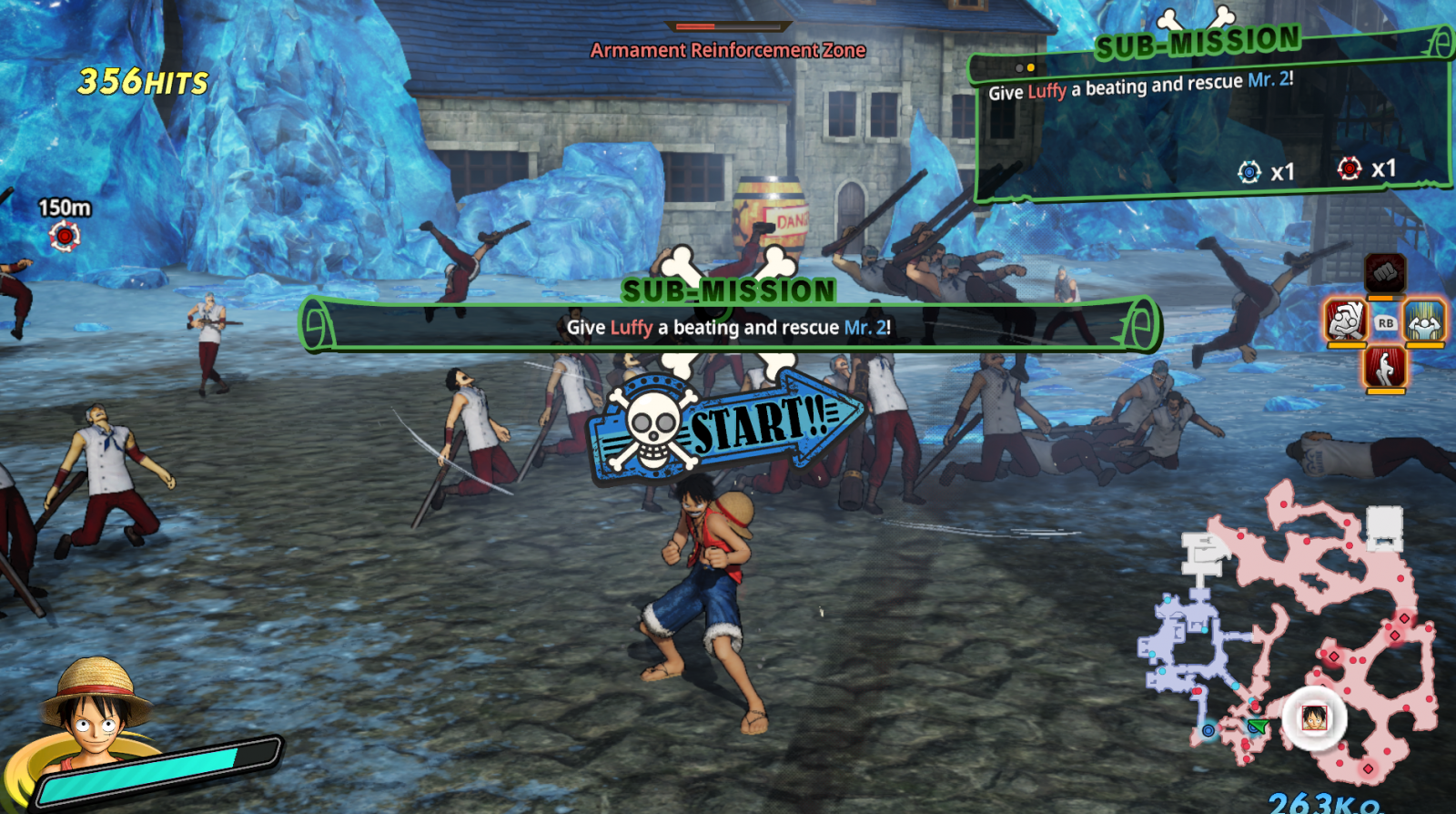 One pirate, so much to do

As I played the different modes, I found the Treasure Log mode to be the most challenging and rewarding of the three. In Treasure Log, you select episodes to play and you must complete the objective to earn crew points and level up your skill set, all while completing the main objective and side quests. I also found that the bosses and pirate commanders were more difficult, but there were more of them, forcing me to strategize and plan my attacks. Whereas the other modes, regardless of difficulty, never made the enemies strike more, it just made their attack strength and defense higher.

One Piece: Pirate Warriors 4 introduces some great fighting mechanics, overhauled systems from previous iterations, and smoother and more rewarding gameplay to the franchise. While it doesn’t do anything new to uplift the Musou genre of games, it’s a good game to pick up and beat the crap out of pirates as Luffy tries to become the king of the pirates.

T.K. is a narrative designer and creative visionary. As a game writer, he spends much of his time designing and developing worlds, developing deep characters, and writing strong narratives to evoke emotions from the player. If you can't catch him writing, you can catch him on 2's.
Related Articles: One Piece: Pirate Warriors 4
Share
Tweet
Share
Submit