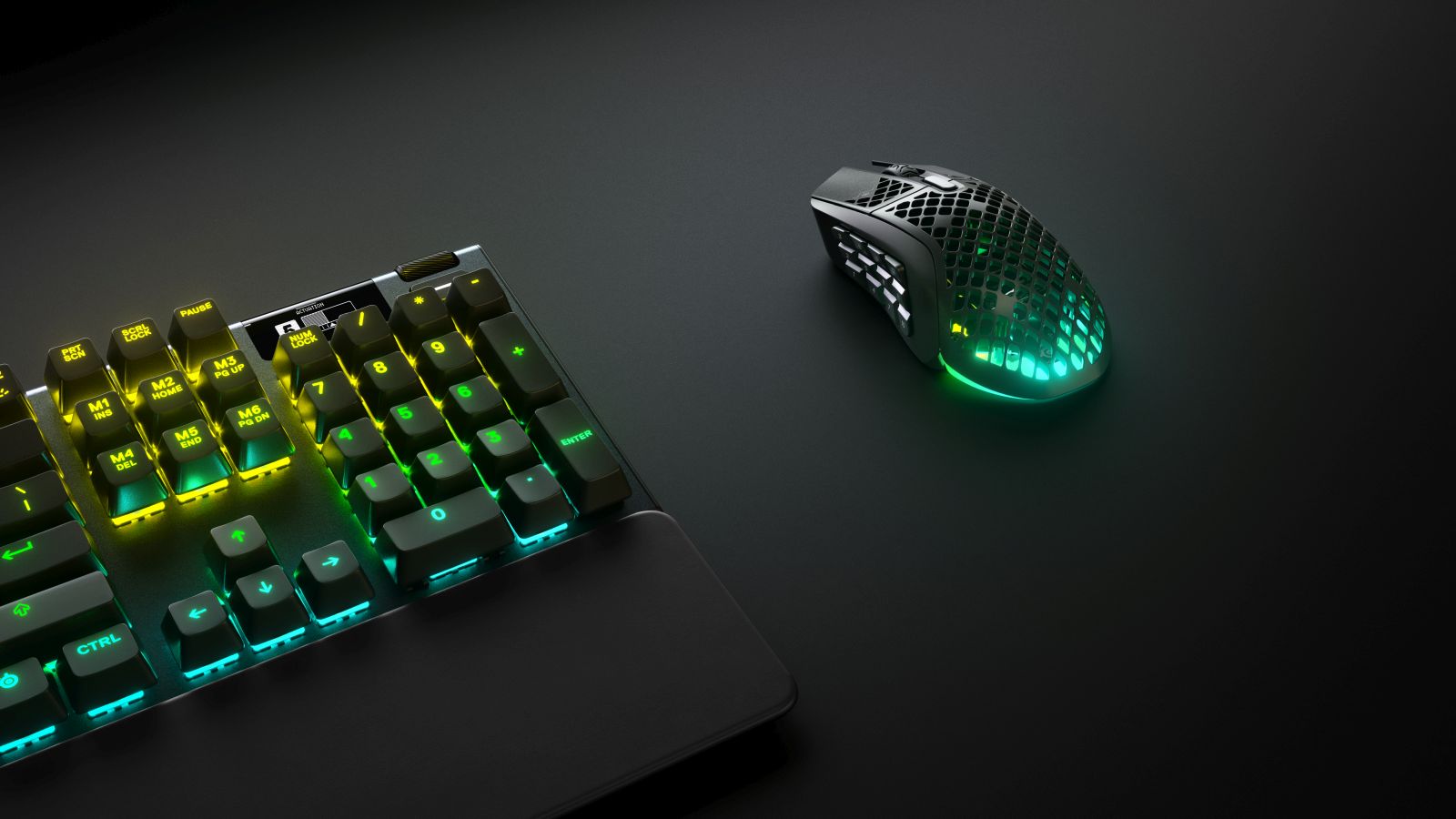 So, if you missed it we just talked about how great the Aerox 5 Wireless gaming mouse is. You might be here because of that, or you may have just wandered in because Steelseries literally just announced these things, I don’t know. In any case, you want to know if this version of what Steelseries has cooked up is worth it, and I’ve messed around with these things over the last week or so to let you know what the deal is. Let’s jump right in, and I’ll try not to repeat too much from the Aerox 5 Wireless review (given these are so similar, go check that review out here).

The Aerox 9 Wireless gaming mouse has a lot in common with its brother the Aerox 5 Wireless. They share a common 180 hour+ battery, the honeycomb shell and incredibly comfortable design, similarly nice clicky right and left mouse buttons (maybe there’s no difference but I swear it feels like the Aerox 5’s is better), the same CPI/sensor tech, which leads to the same great performance. Buying one means you’re getting a lot of the same stuff; the aquabarrier IP54 protection, the amazing PTFE skates, RGB lighting, and the Bluetooth and 2.4GHz connectivity. Unfortunately it also means you’re stuck with the wireless dongle that’s a bit subpar, and there’s nothing for left-handers, but most of what you’re getting with the Aerox 9 Wireless is the best parts of the Aerox 5 Wireless, but $10 more. 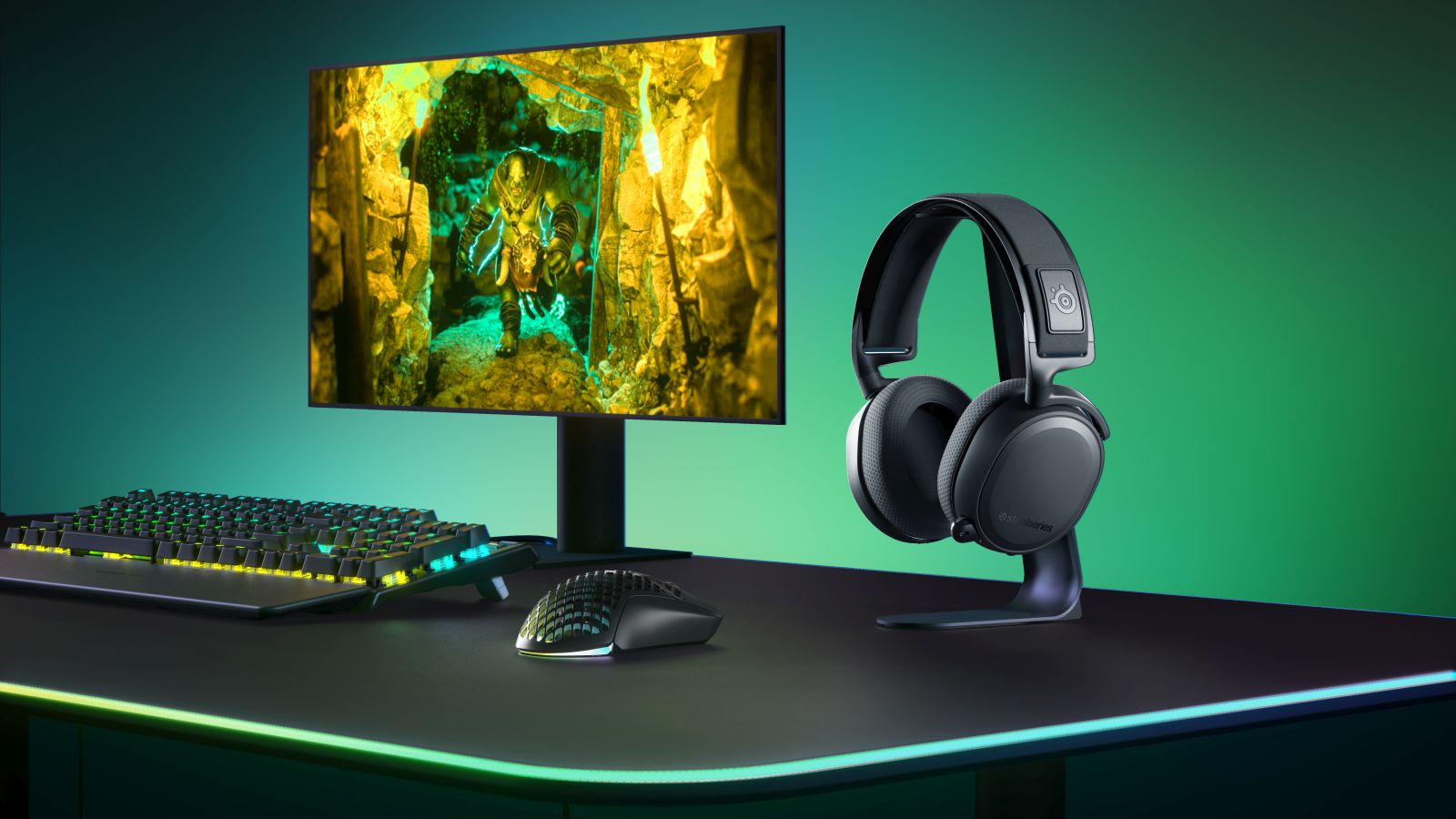 You might be asking the question, “Why should I buy this one?”. Do I have any MMO or MOBA peeps present? This is why you’re grabbing this one. While it’s a fantastic mouse for anyone to use, the Aerox 5 Wireless only has 9 buttons. That’s certainly nothing to cry about, but the Aerox 9 Wireless offers a lot more than that, hence the jump from 5 to 9. With this mouse, you’re upgrading your button setup to a total of 18 buttons on it, with 12 number buttons on the side and a tilt button function added to the scroll wheel. It sounds absolutely insane, and it is… and then you get your hands on it.

When I first took these two mice out of the package I could barely see a difference. Some might look at that negatively, but I believe this is a major positive. The same comfortable feeling you get holding the Aerox 5 Wireless is what you get with the Aerox 9 Wireless. That’s not an easy feat when you add so many buttons, and it still somehow stays light with all that stuck onto it. The wizards over at Steelseries have the Aerox 9 Wireless weighing in at only 89 grams, still well under 100 and only 15 grams more than the extremely light Aerox 5 Wireless. The Aerox 9 Wireless does feel a bit more hefty, but more in the sense it feels slightly more dense compared to the Aerox 5 Wireless. It also doesn’t feel like it pulls to one side over the other, even with a major group of buttons sitting over on the left side. 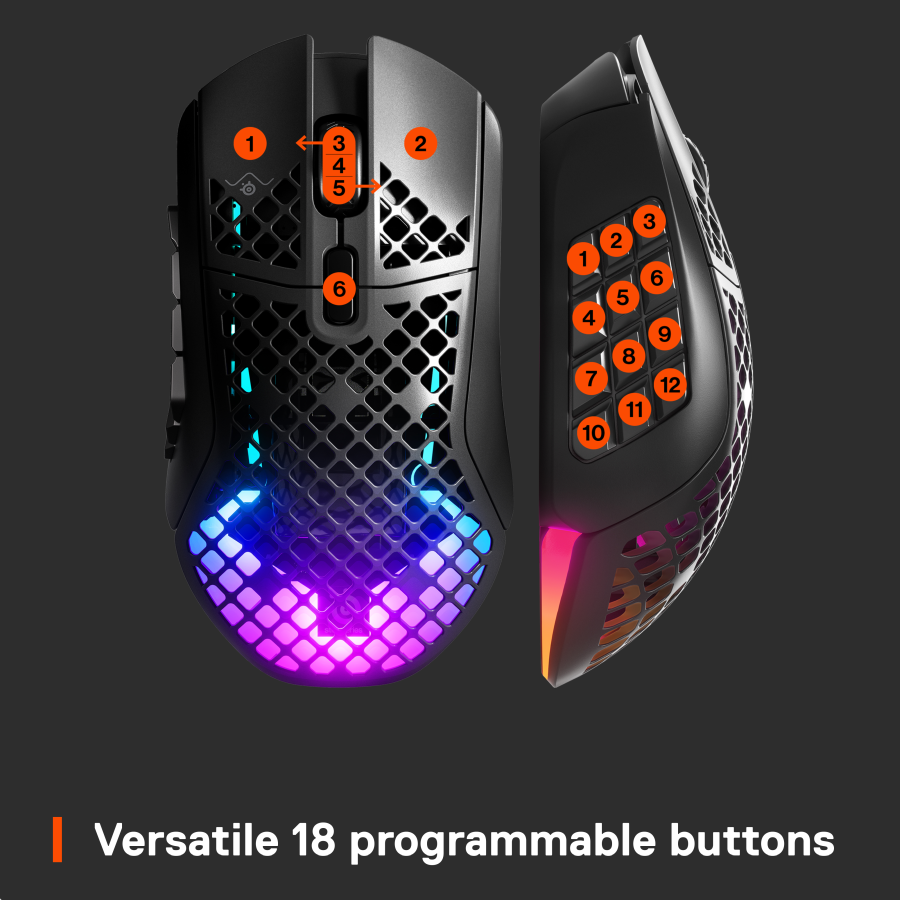 Now, the one thing I’ve noticed while messing around with the 12 side buttons on this mouse is that I’m again at a disadvantage because of smaller hands. While 4-12 is decently in reach, I have to stretch a bit to press 1-3. Not necessarily a huge deal, but if you have less than large palms and digits, this might not be for you. One of the benefits I see past this slight downside is that it’s still easier than having to stop any movement I’m doing just to find the number on the number pad or top row for the skill I’m attempting to use. In a world where many MMOs are becoming more action oriented, and you have MOBAs where a split second could decide a round, the advantage you can gain with this mouse is substantial.

I don’t play a ton of MMOs or MOBAs myself, but I enjoy playing Diablo, Overwatch, and occasionally some New World, and I can easily see the convenience the Aerox 9 Wireless adds, possibly even more than the Aerox 5 Wireless. Being able to map out 5 extra buttons on that mouse was pretty sweet, but turning it up to 14 is all kinds of ridiculous. For something like Overwatch I could attach every skill to the Aerox 9 Wireless, and make it so I’m rarely using my keyboard for anything beyond movement. With Diablo obviously nearly all of your skills are on the number bar, so it makes accessing them easier than ever, and New World has plenty of similar skills to either remap or use from the default configuration. Yes, plenty is at your fingertips on a keyboard, but it’s even closer on this mouse. 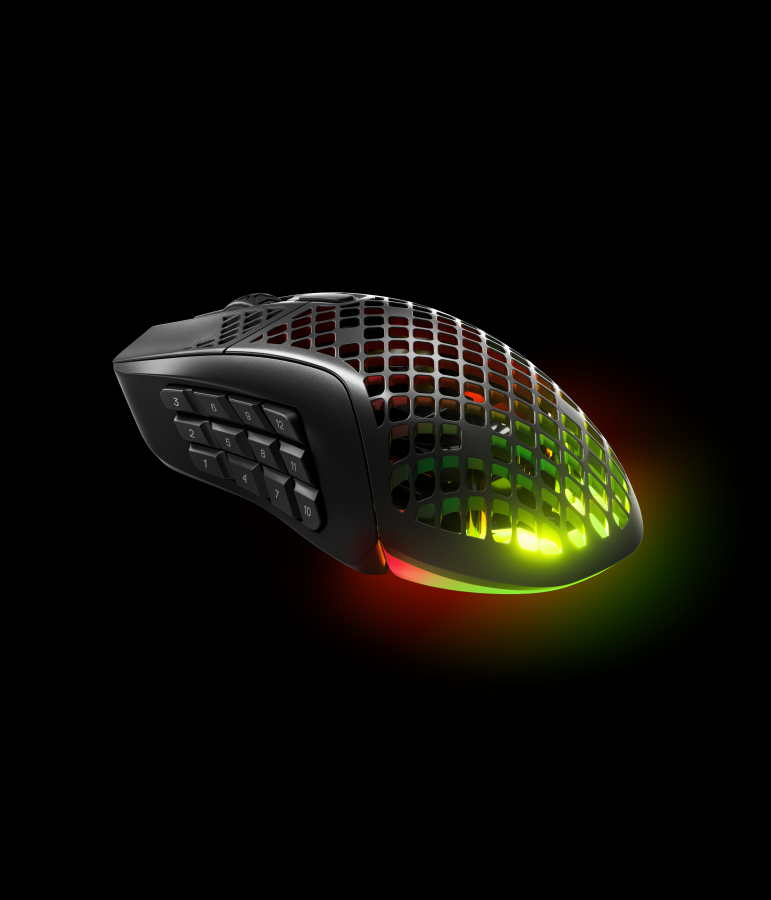 The only thing really keeping you from doing all of this is the fact you’re going to have to put some time in to not only map everything out, but you’re going to have to learn to use this mouse. It’s not an easy feat, and the buttons don’t have many grooves to let me know what they are. In fact, the only button with any designation on it is the 5, with a little raised section to give you that instant identification. The rest of the buttons feel largely the same, so spending some time with it to build that muscle memory will be necessary to get the most out of it. The only other thing about the buttons is that clicking them doesn’t feel very great, although it’s a bit better when playing a game. While it could be my hand size, I think they’re intentionally hard to press so you don’t do so on accident, and it feels like they’re missing that satisfying clicky tension found all over the other triggers on the Aerox 5 and 9 Wireless. It just feels like a bit of missed potential, even if it’s understandable how you’d want to keep players from pressing on things accidentally.

With plenty of the fantastic features migrating over to the Aerox 9 Wireless from the 5, this is just having your cake and eating it too. The big bonus to the Aerox 9 Wireless is the jump from 9 to 18 buttons, with 12 on the side; accessible to MMO and MOBA players or just someone who prefers to let their mouse do the work. It can be a bit much to grasp for someone with smaller hands, especially since the buttons aren’t as easily pressed, but this is an excellent gaming device for only $10 more.

David Burdette is a gamer/writer/content creator from TN and Lead Editor for Gaming Trend. He loves Playstation, Star Wars, Marvel, and many other fandoms. He also plays way too much Call Of Duty. You can chat with him on Twitter @SplitEnd89.
Related Articles: Steelseries Aerox 9 Wireless
Share
Tweet
Share
Submit