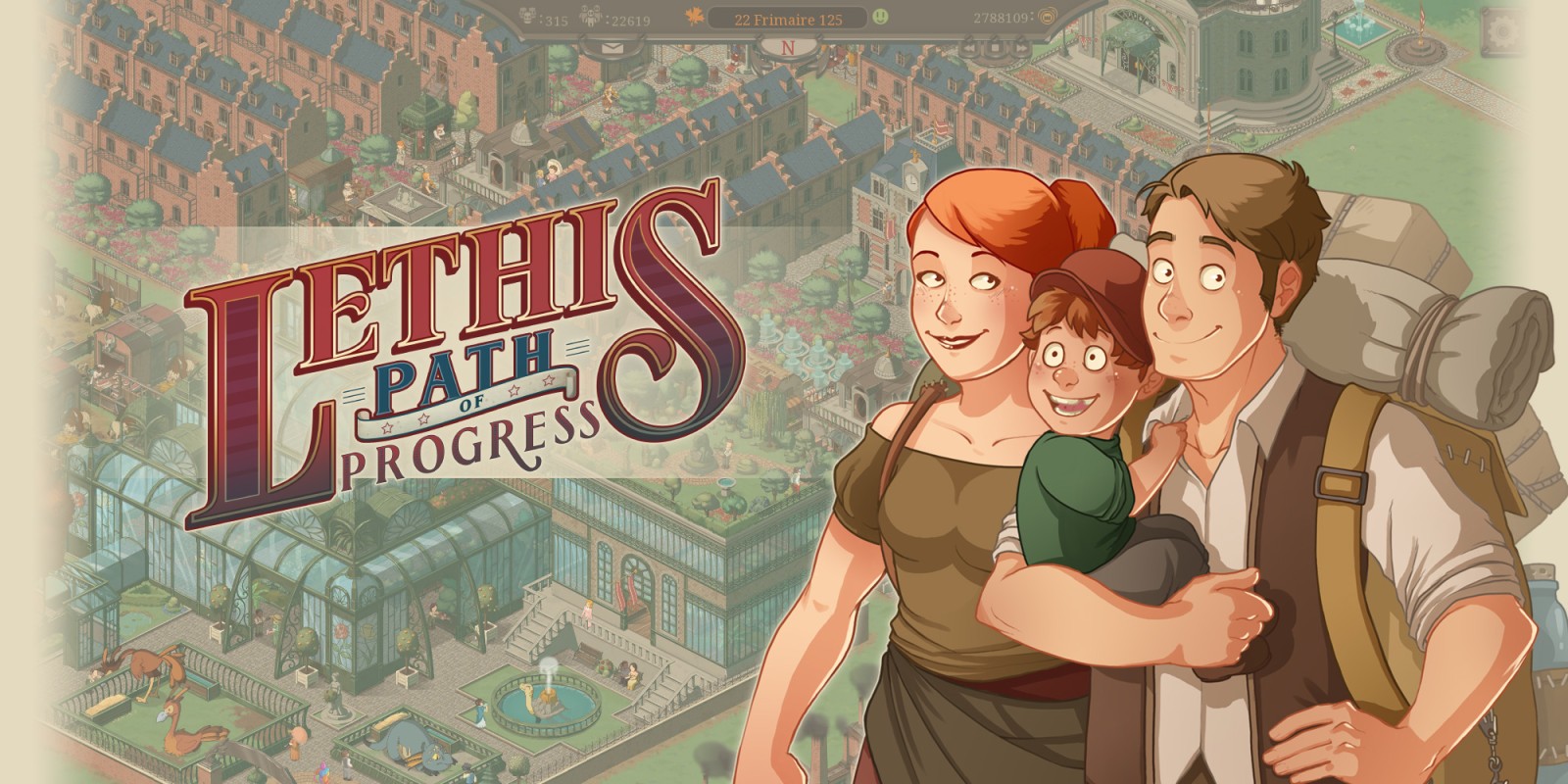 I’ve had a bit of a tough time while playing Lethis: Path of Progress, on the one hand I am kind of into it but on the other I find it utterly infuriating. Recently released for Nintendo Switch by Triskell Interactive, I was keen to try it out as soon as I read it described as “A city-builder in a Victorian steampunk setting”. That sounded right up my street, I’m known to enjoy the occasional city building sim and my entire living room is decorated in a steampunk style; what could go wrong? I’d seen some screenshots from the earlier PC release in 2015 and I wasn’t sure about the artistic direction but that’s not the end all be all. Beyond that I was going into this game blind yet with a sense of optimism which would soon turn into what felt like a constant battle between the game’s strange mechanics and my enjoyment of the title. So let’s take a walk and see where this path goes…

The road is long…

I want to get this out of the way right out of the gate, my concerns about the graphical style of Lethis: Path of Progress were immediately put to rest. Presented in an old 2D fashion that really adds to the games aesthetic, Lethis looks really rather beautiful when you see it running. The color pallette employed is perfect and gives everything a slight cartoon or hand drawn vibe. Rustic tones feed into the Victorian steampunk theme and shades of blue or red will really pop against the somewhat muted colors present elsewhere. Buildings are sharp and detailed with a good deal of variation as are the different characters and vehicles that will roam around your city. Hot air balloons and Zeppelins cross the skies and steam shoots out from geysers, suppliers and vendors zip around the streets in steam-powered vehicles while settlers work the farms or industrial areas. I only wish you could zoom in a little closer to really take in the charming splendor of it all but the camera stops a bit short of the action. There are some interesting and sometimes odd things to build in Lethis from silk farms featuring huge blue silk worms, networks of brass pipes to carry steam from those geysers I spoke about all the way into a massive compressor, and an exorcist building which is needed to keep areas free from ghouls and ghosts. No really, that’s a thing. There’s a slightly wacky hint to the whole game, but it’s subtle and fits. Personally I prefer a more horror, H.P Lovecraft vibe to my steampunk themes than is present here, but it’s all very vibrant and everything looks good on the Switch in handheld mode and particularly nice on the big screen when docked. 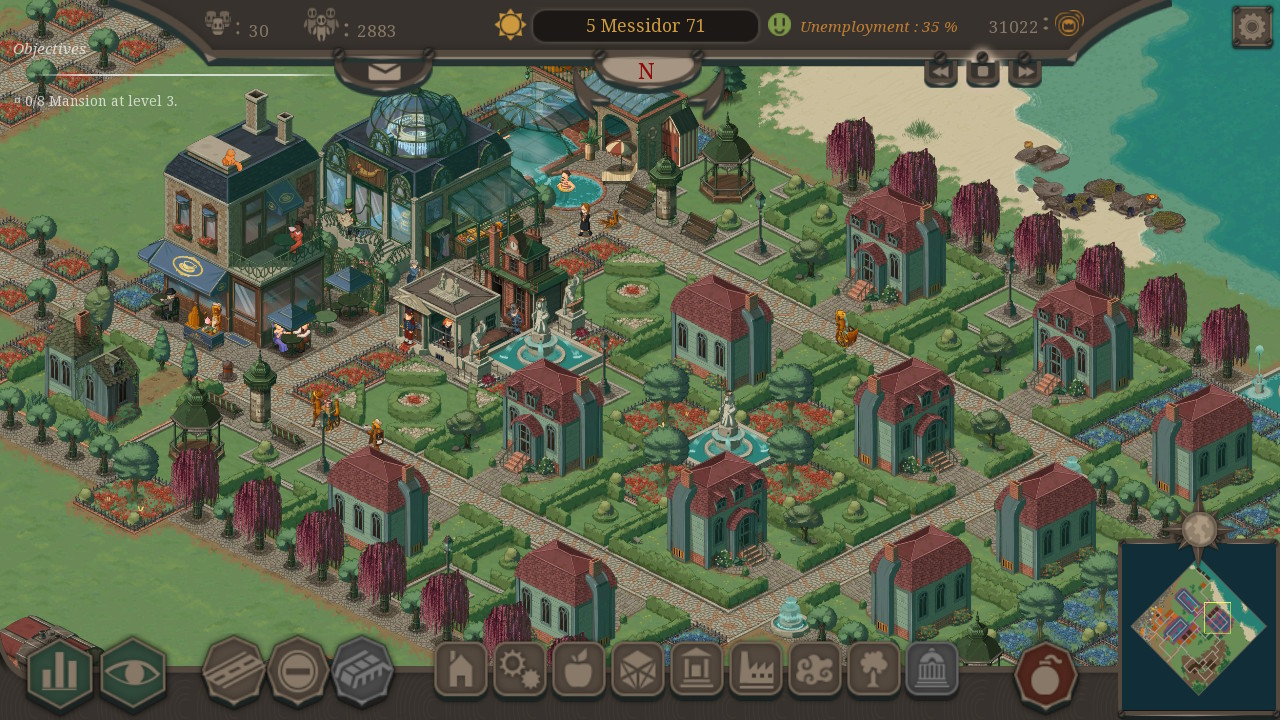 Controlling Lethis: Path of Progress on Nintendo Switch is a bit of a mixed bag for me and I am fairly confident that it all stems from the PC origins where a mouse and keyboard is the standard. On the Switch while playing in handheld mode, the short travel of the Joy-Con sticks can make it hard to be accurate when positioning the cursor and I’ve either built in the wrong place or destroyed the wrong thing more than once due to this. You can slow the cursor speed right down but doing so made everything feel too far on the side of sluggish and laborious. Touch screen control is also offered and it does work well… to a point. Scrolling around the map, zooming in and out or navigating menus is all effortless here; but again it’s placing things that’s the issue. The combination of the small screen of the Switch and the inability in-game to zoom in any further than is possible makes it hard to place a thing exactly where you want it. This may indeed be exaggerated by my big, sausage-like fingers but I think most players are going to experience this issue to some degree. I did try using a typical stylus to get around the problem but that didn’t do much to help things. The Pro Controller on the other hand works very well and offers a good level of precision once you’ve adjusted the cursor speed to your preference. This control option is only really let down buy a lack of buttons, where you would have had a range of keyboard inputs available on the PC version those are of course absent on a control pad. Still, the developers have done a pretty good job mapping out a control scheme that allows you to get around the various elements efficiently.

A fork in the road…

One of the most important things to master in Lethis: Path of Progress is efficient planning of your roads, the “path” part of the games title. Everything your residents need in order to settle happily and more importantly, improve their dwellings, is provided by a little travelling NPC who’ll depart from their respective building. Be it water, maintenance, goods from shops, whatever the resource is will be dished out by this NPC who’ll wander around your roads doing their thing. You need to place road blocks at cross roads or strategically on long sections of road to stop these people wandering off to areas they are not needed or to make sure that any given supply route isn’t too long, which results in residents not getting supplied frequently enough. It’s an interesting way of doing things and it does make the game somewhat more involving than it might otherwise be, giving you pause before just slapping buildings down anywhere, forcing you to consider efficient town planning. It’s also the point at which Lethis really started to get on my nerves. On numerous occasions and despite what I thought was some meticulous planning I would find that some building had suddenly fallen down because the maintenance NPC hadn’t swung by in recent memory, or that houses wouldn’t advance to a higher level because the residents inexplicabley were not getting access to enough food even though the store had plenty of stock. 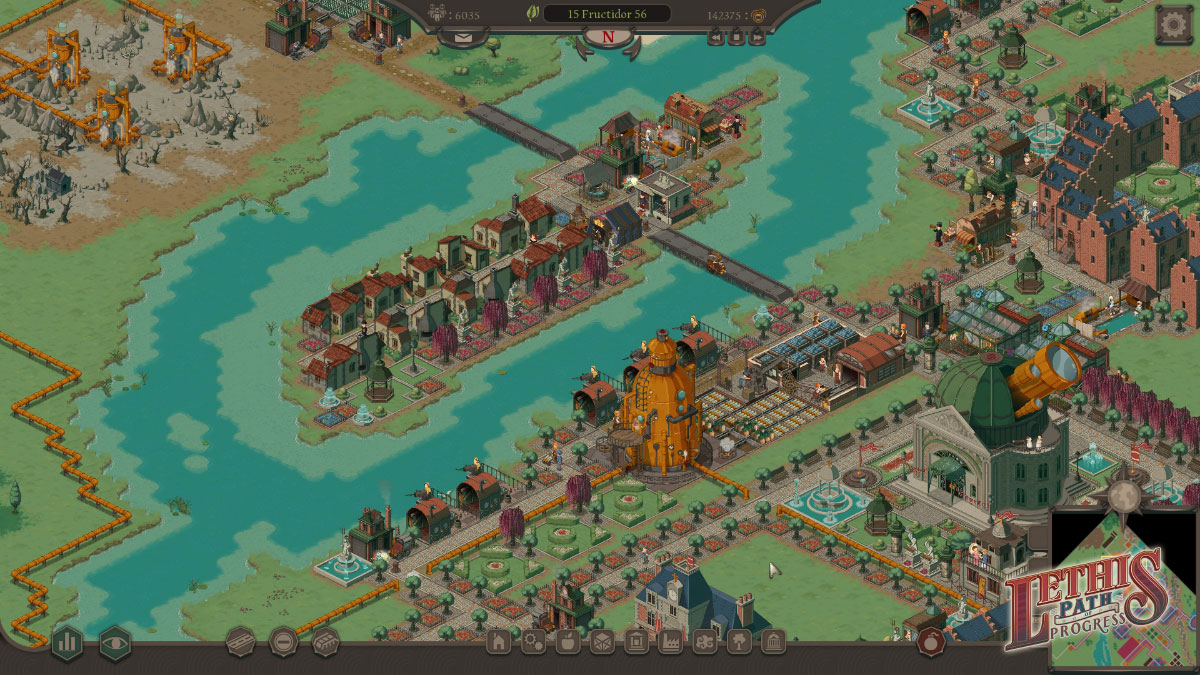 The final straw came when I had built a slightly bigger residential area than I normally might and noticed a row of four or five houses that hadn’t leveled up along with the surrounding dwellings. Upon further investigation I learned that those particular residents wanted to be closer to a wash house… despite there being a wash house built literally next door to the first of these houses. What ends up happening is that you find an efficient way of making residential blocks and then just copy paste that design as you gradually need more houses, making larger cities appear somewhat bland and uninspired and sort of wasting that great graphical style we spoke about earlier. The path planning mechanic in an interesting take on city-building, and Lethis might come up short against other games of the genre without it, but at the same time if often feels like something just isn’t working and often, when one thing stops working in your city, it won’t be long until other things break down. It’s a shame because I really want to like this game with its quirks and charms and pleasing music, it just runs out of steam before the finish line.

Lethis: Path of Progress shows some real potential and brims with character but ends up feeling like a struggle against the fiddly controls and the path mechanics seemingly just doing their own thing despite your best efforts ultimately leading to frustration.