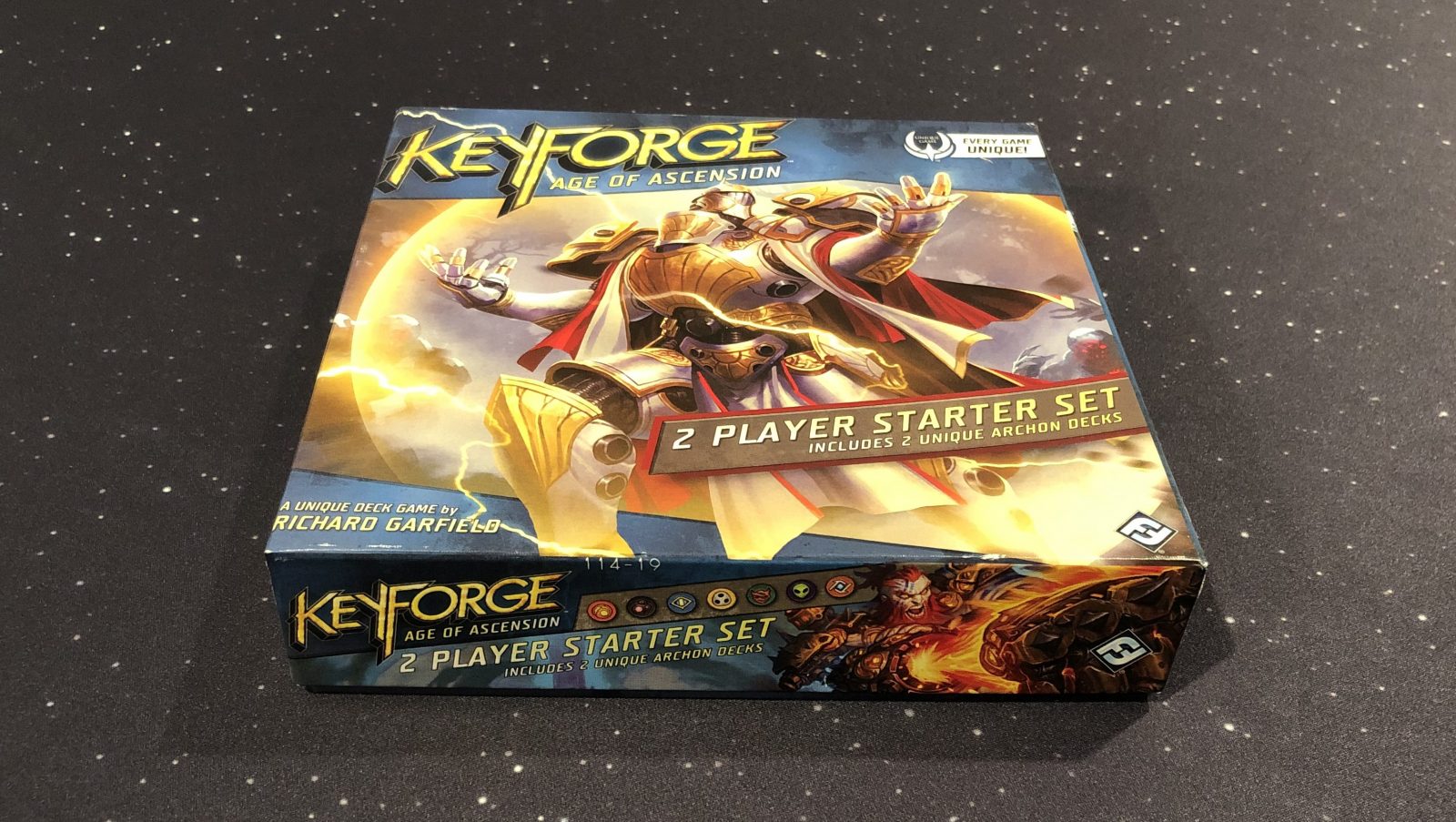 KeyForge is a two player card game from Fantasy Flight Games designed by Richard Garfield, the designer of Magic the Gathering, King of Tokyo and other amazing games. KeyForge is a card game that is touted as a unique deck game, meaning that every deck a player buys is different from every other deck. Fantasy Flight says that the potential number of unique decks is over 100 quadrillion, so there’s little risk of a dearth of new decks to try out. The players in KeyForge take on the roles of Archons, magical beings in the science-fantasy world of Crucible, that are attempting to forge keys that enable them to unlock hidden vaults filled with ancient knowledge. The world is divided into houses which each have their own themes, characters, powers and styles. The Archons rely on the inhabitants of their world from the different houses to help forge the keys they need. In gameplay, the players use unique decks of cards, each filled with creatures, artifacts, and actions from three of the houses. As they play, the players fill their battlelines with creatures that can fight each other, perform various actions, or reap Æmber. Accumulating Æmber throughout their turns, the players eventually gain enough (typically six) to forge a key. The first player to forge three keys wins the match. The game is being produced in sets: the first was Call of the Archons, the second is the Age of Ascension and coming soon is Worlds Collide. Each set features a two player starter box intended to get new players acquainted with the game; this review focuses on the starter from Age of Ascension. 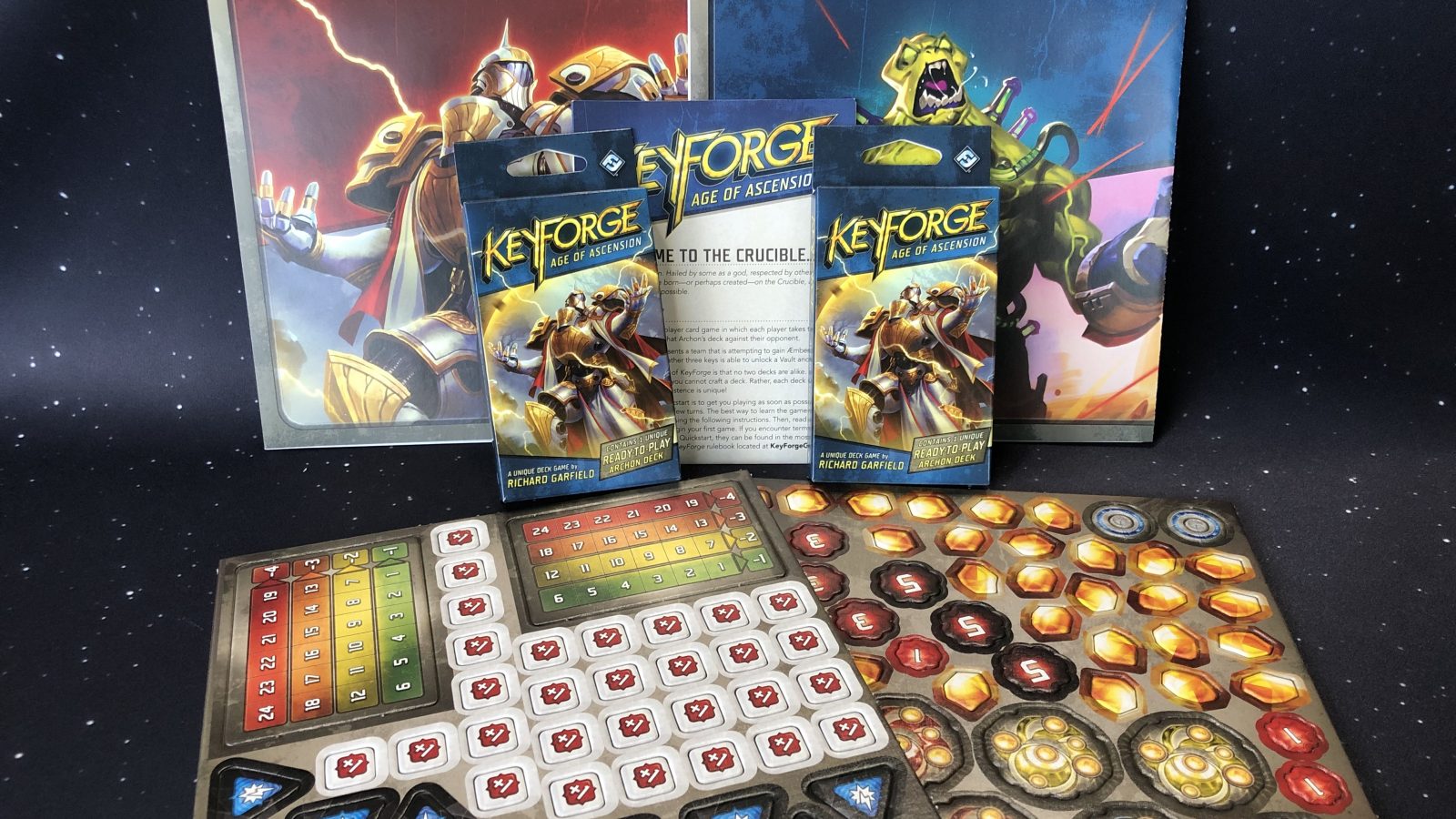 The box has everything that two players need to get into the game. It has a quick start rule guide, two unique decks of cards, two paper player mats, a pile of cardboard tokens to represent keys, Æmber, damage, and chains, and two cardboard chain trackers. The player mats are thick, glossy paper with artwork from the game and graphical representations of the playspace to help orient new players to how they should arrange things during gameplay. The damage tokens are red colored and in one, three, and five damage increments, increasing in size and darkness as the damage increases. The sizes and colors make them easy to identify in a pile as well as on the creatures in play. Æmber tokens look like amber-colored gems and represent one Æmber each. The key tokens, dull on one side and colorful on the other, represent both unforged (dull) and forged (colorful) keys; there are three for each player. The stun and power tokens are used to track when a creature receives a power increase or is stunned; these tokens are different from the Call of the Archons starter set, which had cards for the same function. Finally, there are two cardboard chain trackers, each about the size of a card, that keep track of chains that a deck accumulates and loses through gameplay. The chain trackers were also cards in the last starter set. The conversion from cards to cardboard for the stun and power tokens and chain trackers is an improvement; the tokens fit easier onto the creatures on the battleline without cluttering up the playspace and the chain trackers are sturdier and more impressive. The decks are just decks, but they are the one area that is a huge departure from the Call of the Archons starter box. The starter box for the Call of the Archons set included a pair of training decks that, ironically, were not unique, but instead were designed to introduce players to the game and then once the players were comfortable, never to be used again. Age of Ascension has graduated from that training deck concept and just hands the players two unique decks. This might make the game a little tougher to learn since the quick start can’t hold the player’s hands as easily, but it’s certainly less wasteful and it puts a lot more confidence in the abilities of the players to figure out how to play the game. Once all of these components are set up on the table and the players shuffle up their decks, they are ready to go. 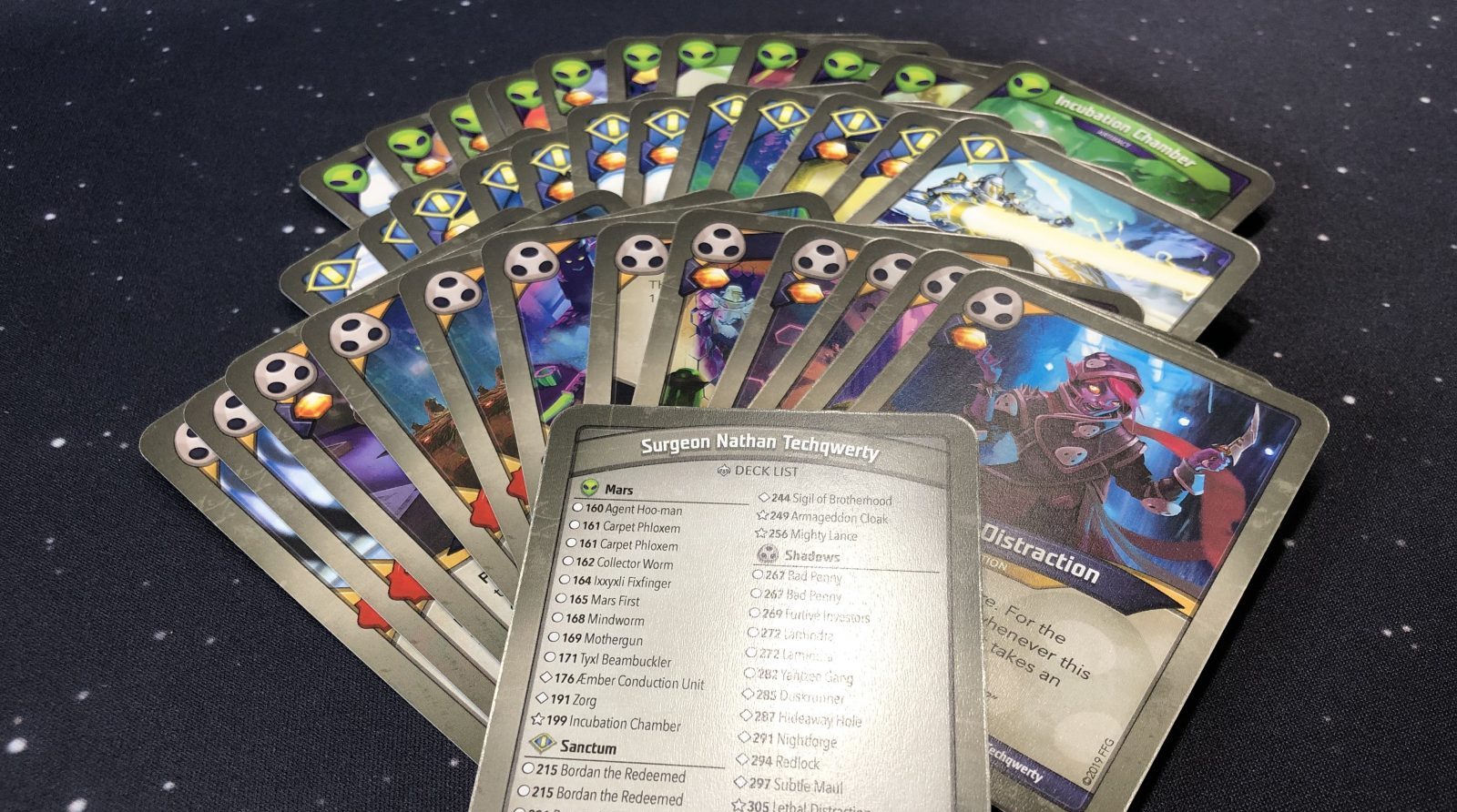 After a short read through the quickstart guide, players have enough information to start playing the game. The guide tells players how to set up for a game, and provides them with the basic steps of a game turn: first, forge a key if you can; second, choose which of the three houses in your deck you will use this turn; third, play, use or discard cards from the chosen house; fourth, reset everything; and fifth, draw cards. They give basic details on how each step plays out and includes a quick reference chart to help refresh memories during gameplay. After the basic walkthrough section, there is some more detailed information on the four different types of cards (artifact, creature, upgrade, and action) as well as how and when to play them. There is a description of using cards, the basics of combat, and some definitions of key terms. The guide is short, only four pages long – one large sheet folded in half and pretty good. To keep it as succinct as it is, Fantasy Flight kept the instructions as barebones as possible. But, there are a lot of nuances that are not covered in the guide; to get the nitty gritty on a game process, you have to go online to the Fantasy Flight website and download the much larger rules reference. This worked out pretty well during my playthrough, but slowed things down because we had to reference the quick start guide to figure out whether the answer was there, or if we needed to look it up on a phone. There were only a few things that we needed to look up online and the online reference was up-to-date. The quickstart guide’s design made it a little awkward to use: it was clearly printed to be used unfolded, but we kept closing it after each reference to it and the way it’s printed had us flipping it around a lot more than you’d expect for a single folded piece of paper. It certainly did not slow down gameplay. The quickstart guide is short and sweet, but I would have liked a little more content in there. 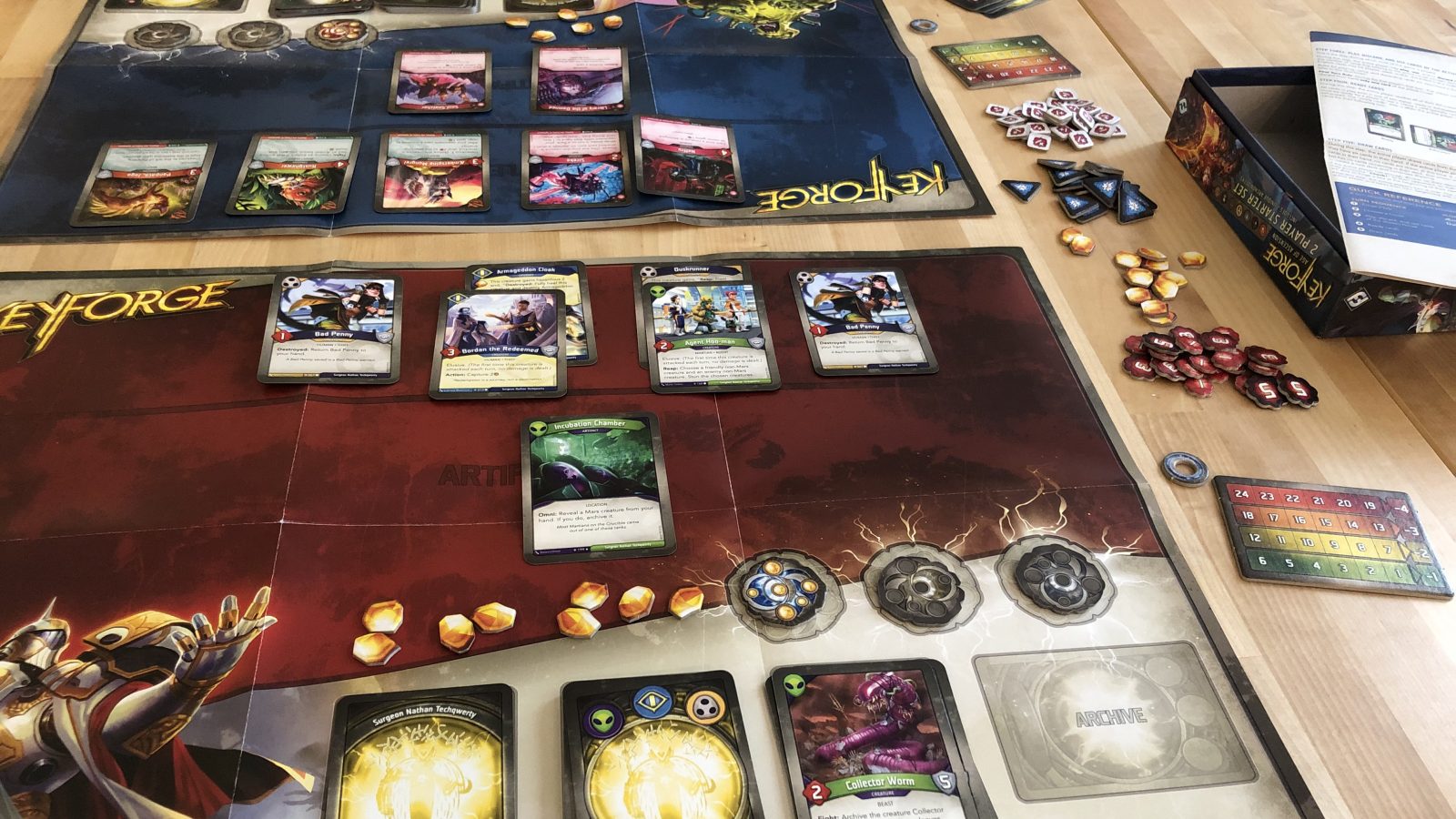 The game itself plays quickly and easily. People familiar with Magic the Gathering, Pokémon and similar card games will find KeyForge to be in line with those other games in structure and process. Aside from the decks, the game itself isn’t all that unique. On their turn players draw cards, play creatures, and fight or generate Æmber. As an experienced Magic player, the biggest thing I had to get used to is choosing a house to use during a turn. You start every turn by deciding which of your available cards you are committing to for the turn. Chances are you will have at least two of your three houses represented in your hand, on the table, or both, so the question is which one to use that turn. Sometimes you’ll have a clear path – a handful of powerful and synergistic cards from one house that you just have to use. But, more often, you’ll have some cards from one house that are useful and some from another which are equally useful, and you have to decide which one to go with and what’s more important based on how many keys you have forged, how much Æmber you have, and where your opponent stands with the same things. Knowing the cards in your deck is essential to making informed decisions during the game. So, playing this game repeatedly with the same deck is necessary to really understand its nuances. Each set has a limited number of cards from each house in four rarities (common, uncommon, rare, and special) and there are only seven houses currently. The Worlds Collide set introduces two new houses and rotates out two, maintaining a total of seven in the set. In practical application, this means that, while each deck is unique, there is one basic set of cards that comprise all of the unique decks, so you will see the same creatures, artifacts, etc. over and over again as you play with or against other unique decks. At this point you may be wondering if a game with tons of unique decks may have some standout decks that are just flat out better than others. The answer is yes. The chain trackers that I mentioned earlier are used to help balance that out. Chains reduce the effectiveness of the deck by reducing the total cards a player can draw up to each turn. The more chains a deck has, the fewer cards available. During regular gameplay, some effects pile on chains, and they slowly go away. Decks that turn out to be synergistic and stacked with strong cards can be weighed down with chains at the start of gameplay, so as a particular deck starts cleaning up in your local game store, its owner can handicap it to make it fair for others.

This is an excellent starter set for a great game. The components are attractive, well made, and useful. The instructions are clear and give enough information to get anybody started playing in short order. KeyForge’s gameplay is innovative, fun, and fast. I can strongly recommend trying it out and taking your first steps with this starter set.

Steven spends his days working deep in the bowels of a government building and evenings with his wife and daughter. He spent the last quarter century working in and around the US military. His passion is tabletop games. You can catch him playing, talking, reading and writing about RPGs, wargames, board games, party games and card games. Steven is from Texas, but currently lives in Virginia.
Related Articles: KeyForge: Age of Ascension, Tabletop
Share
Tweet
Share
Submit