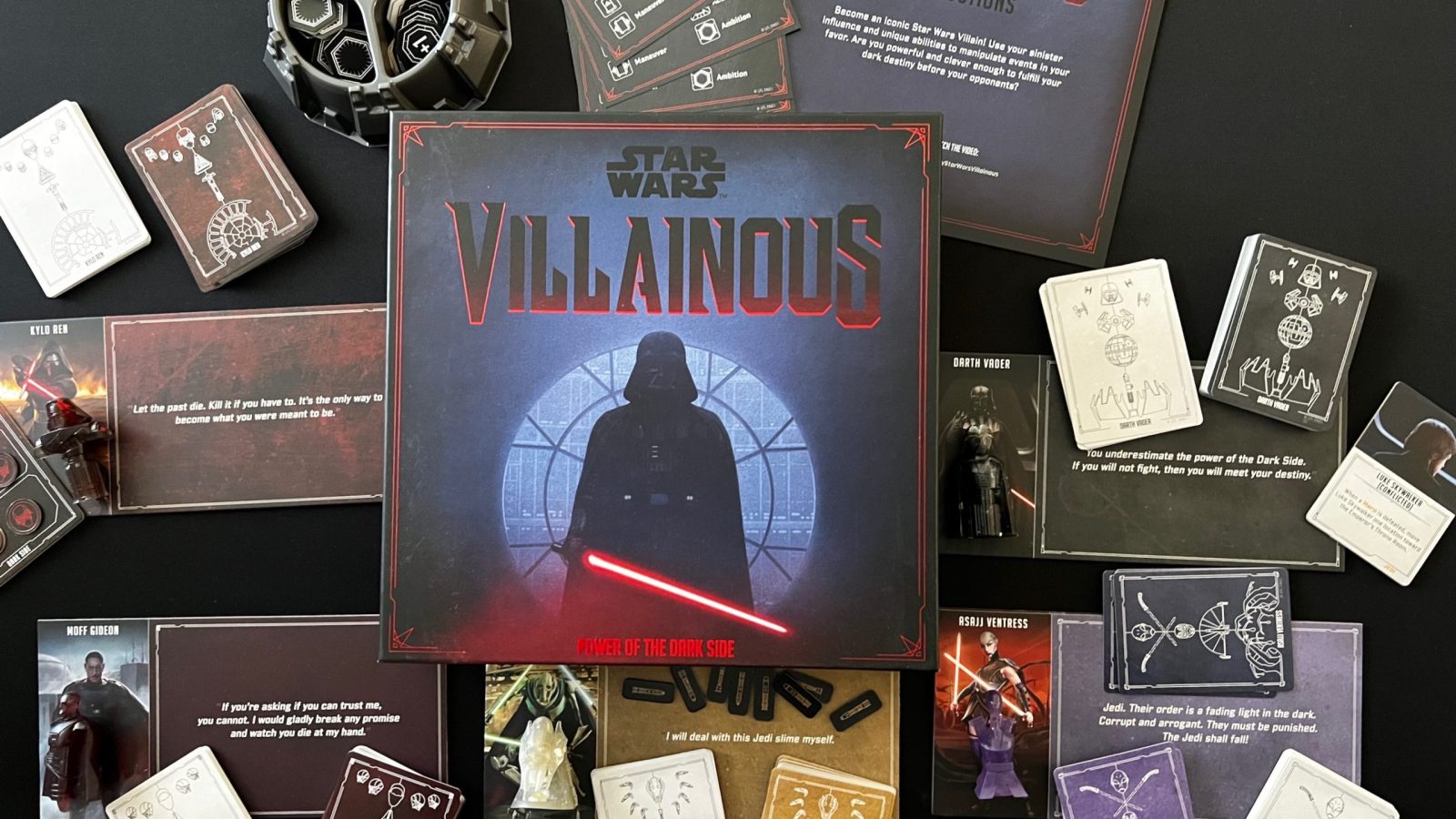 Seemingly every game in the Star Wars universe has you playing as the hero. One Jedi against the empire, a squadron of resistance fighters against the first order, or a band of heroes stopping the spread of the empire across the galaxy. In classic movie trope fashion, the good guys usually win! In Star Wars Villainous: Power of the Dark Side, you get to flip the script and rewrite Star Wars canon as you compete against other villains to see who can harness the dark side most effectively. However, you may find yourself wanting to head back to the light. 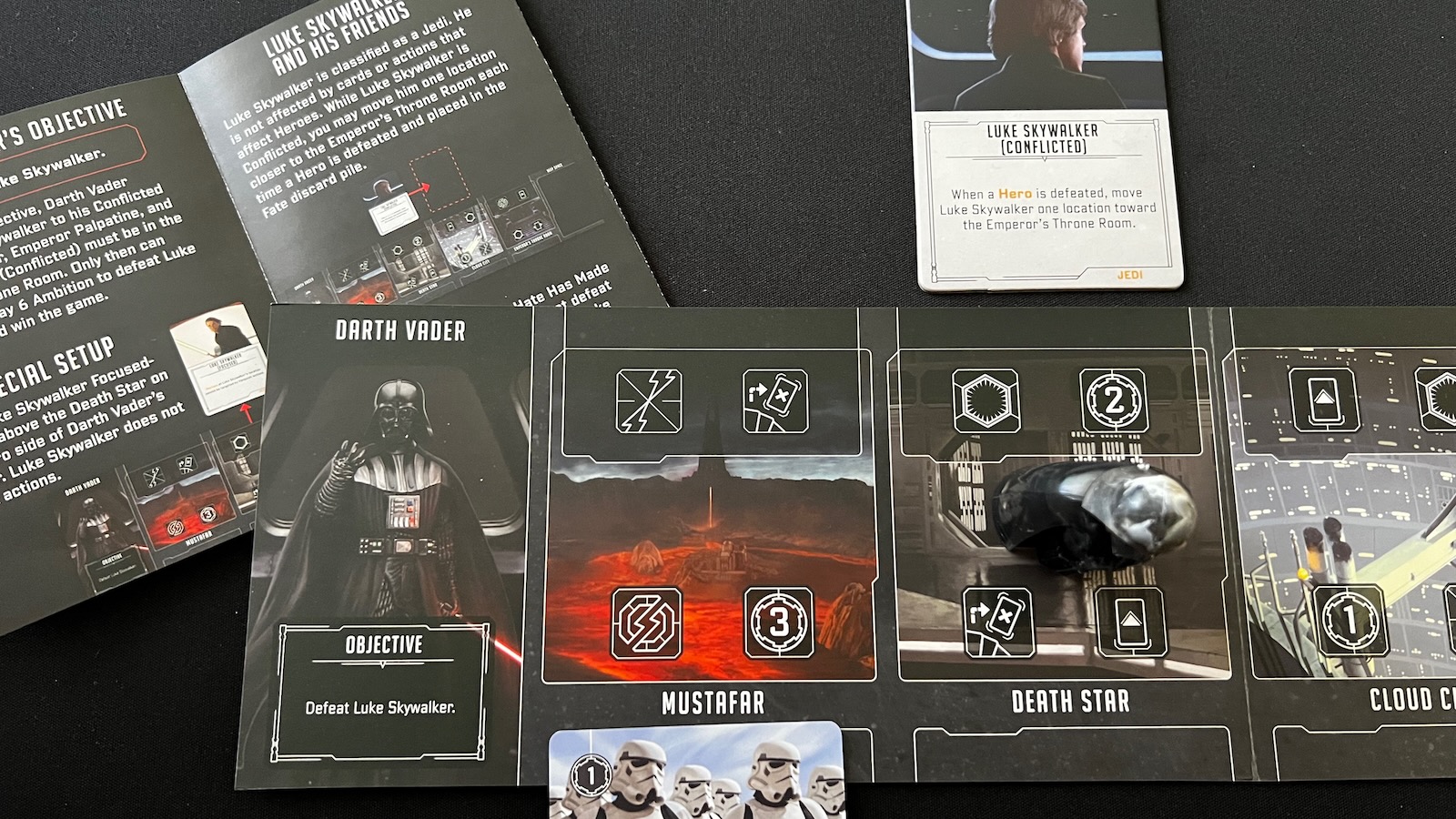 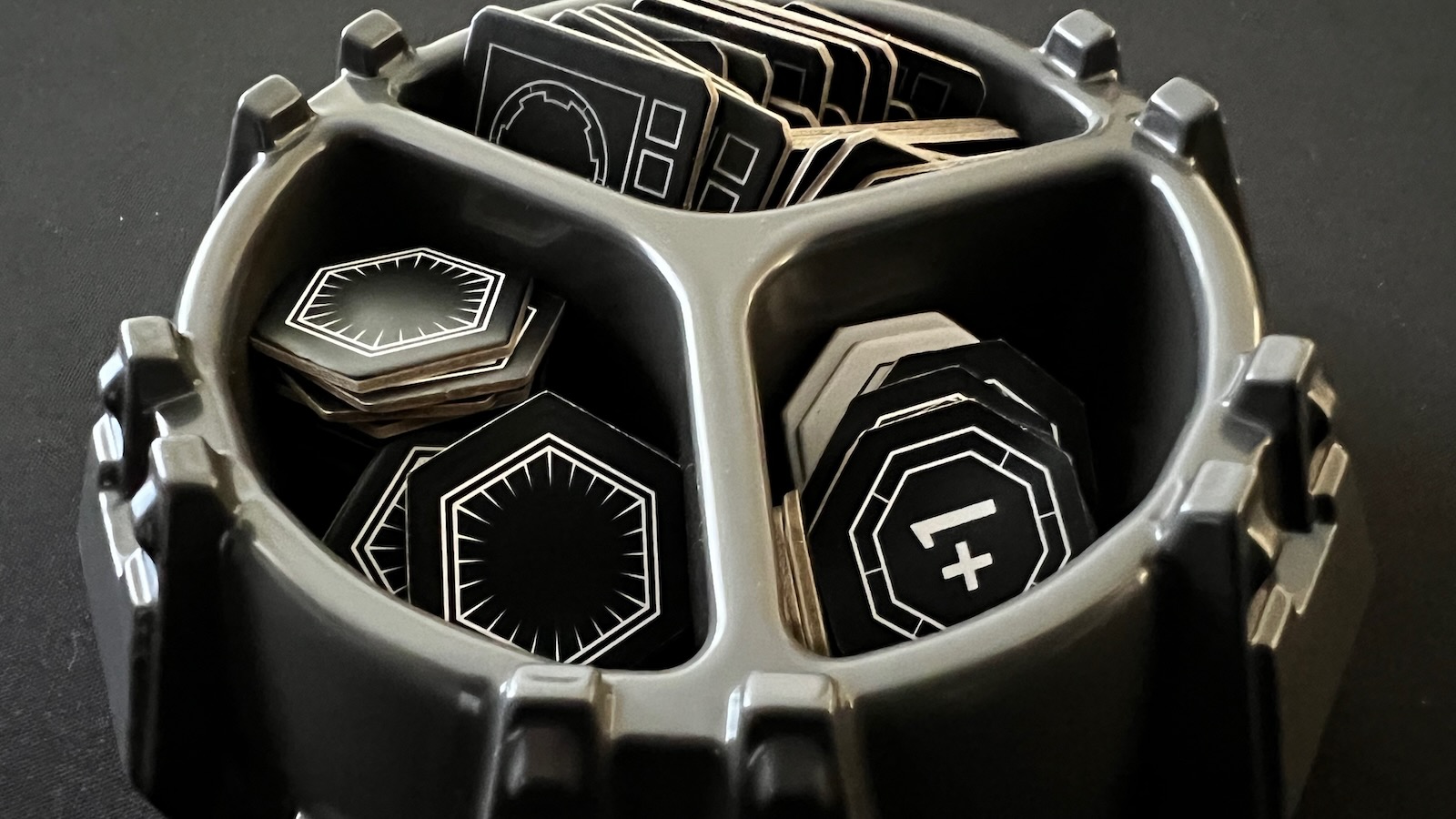 At the start of the game, each player chooses a character to play as which comes with a personalized player board, 3D Character, villain deck, fate deck, and character guide. The guide outlines the win conditions and special play style of the chosen character. The player board has a variety of locations displaying actions common to all players. The actions allow players to gain ambition tokens, credits, play and manage cards from their hands, activate special abilities, and mess with other players using fate actions. Fate actions allow players to draw cards from another player’s fate deck filled with heroes and other events to make final objectives harder to achieve. Hero cards will block actions on the player boards making those spaces less efficient. 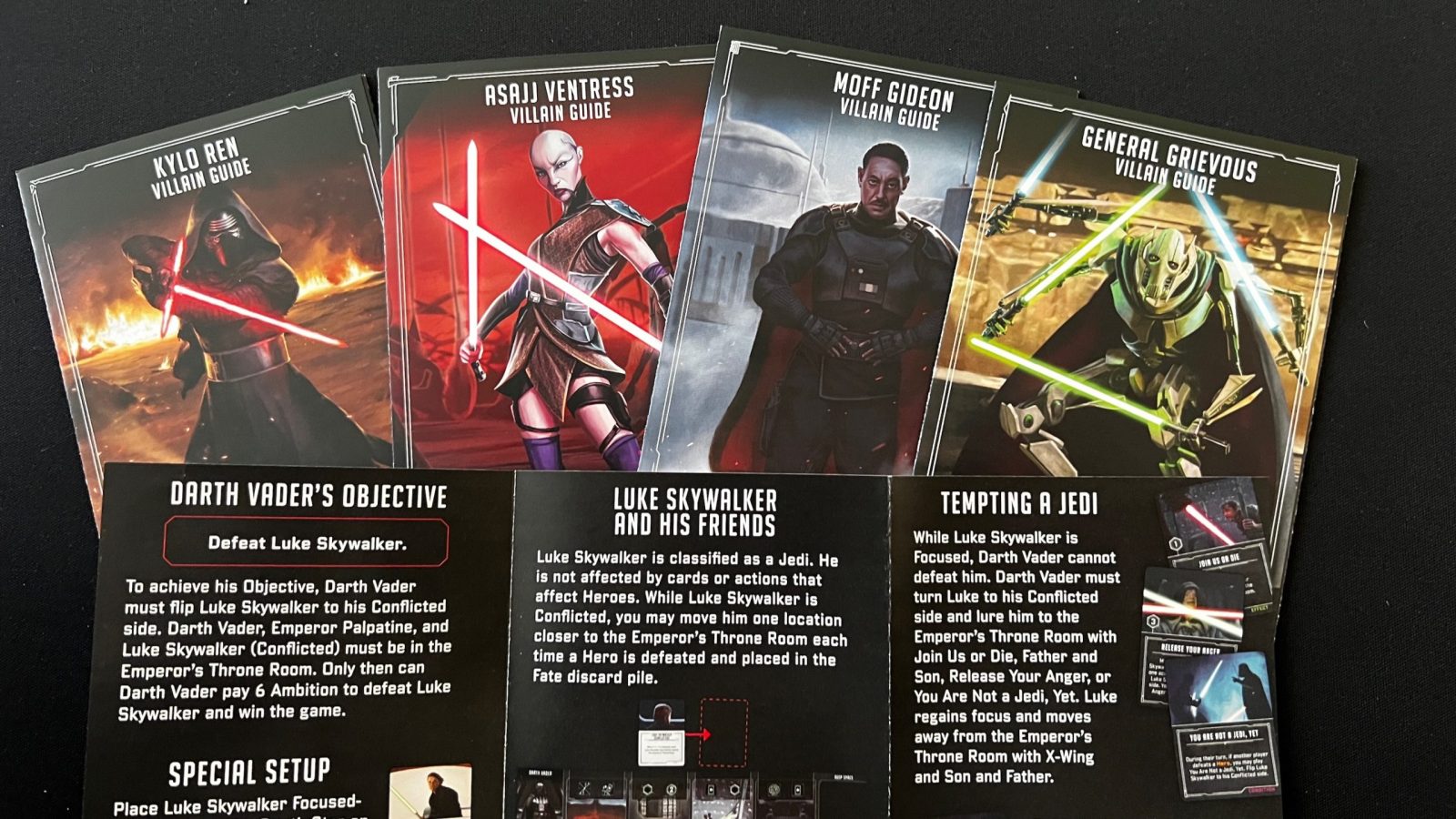 The Star Wars Villains making their appearance in the game span the entire Skywalker saga timeline and each come with different abilities and win conditions. 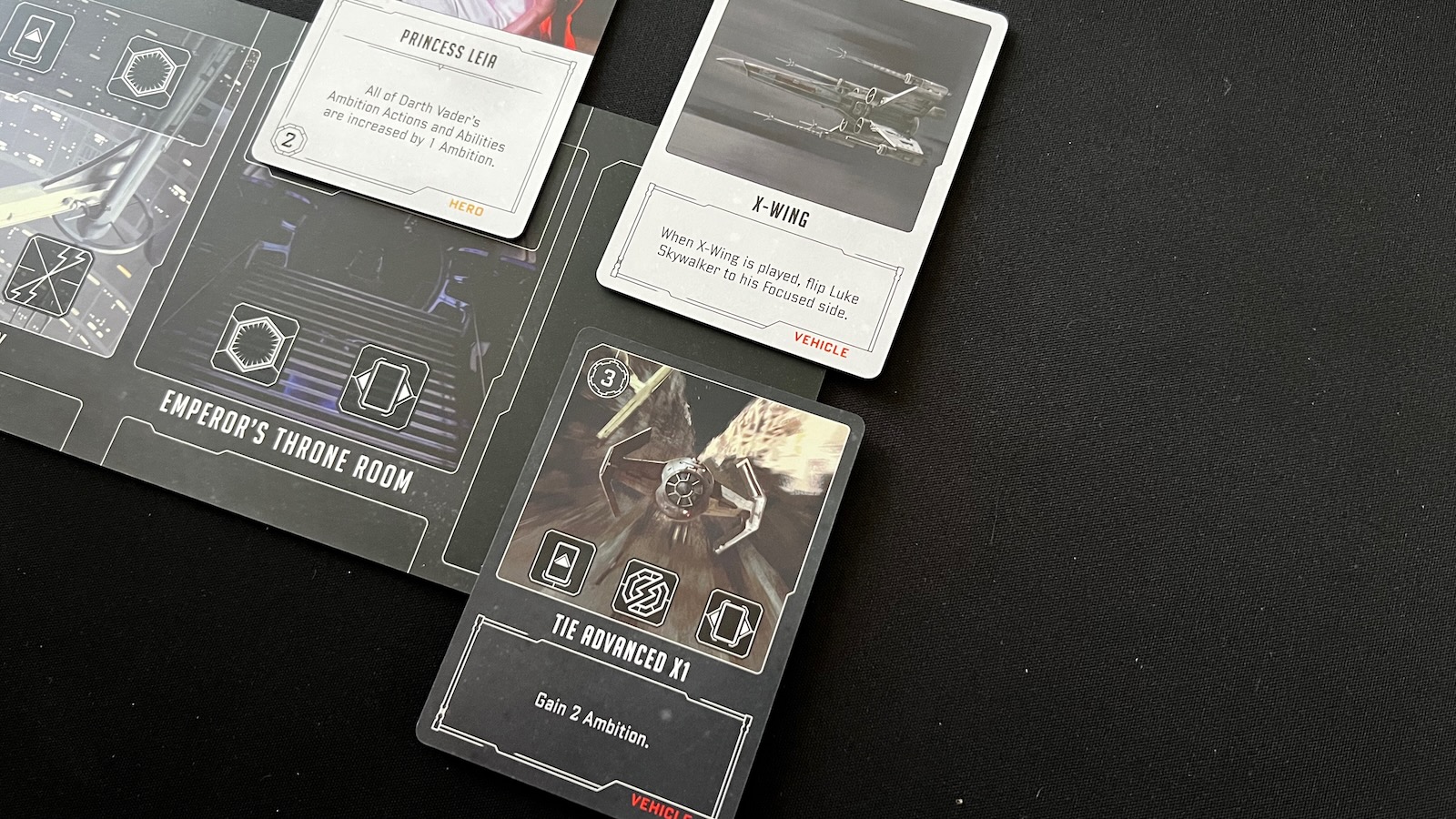 New to this version of Villainous are vehicles. Vehicle cards are found both in the villain and fate decks and are played to Deep Space on the player boards when they enter the game. Villain vehicles give players a new location with actions and special abilities and enemy vehicles can block the villain’s actions and reduce a villain’s hand size. Vehicles can engage each other to take away conditions and allow players to vanquish enemy vehicles. Another new component is the addition of Ambition and Credits, in place of the Power tokens from the original game. Ambition and Credits are spent to play different cards and to activate abilities on some allies. 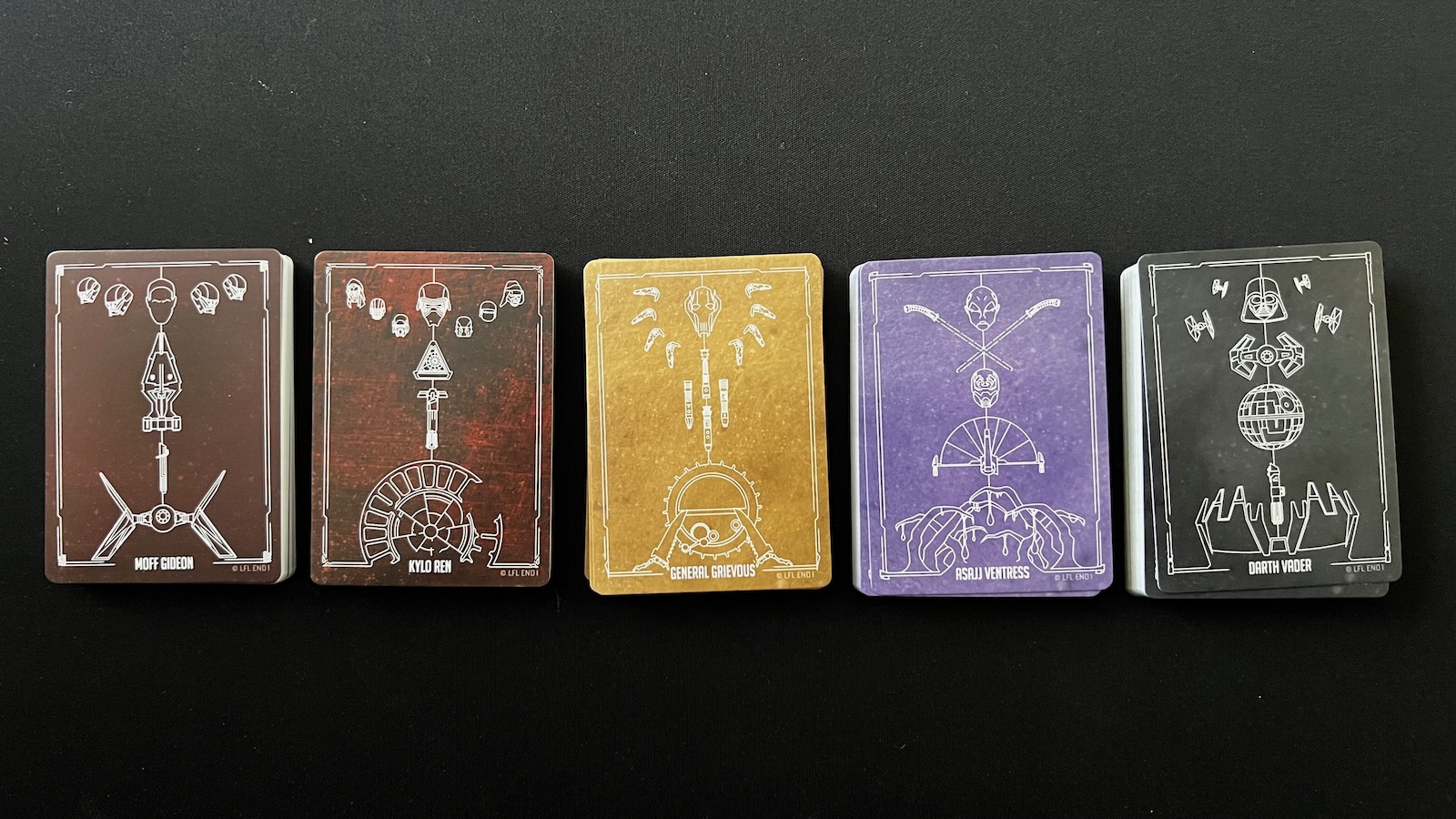 Thematically, this game pays tribute to the source material. Each character and their win condition fits well with the theme and the iconic pieces of Star Wars are everywhere. The artwork on the back of the cards is exquisite. Each one is done in “line drawing” style and fits the theme of each character. The images used on the cards are tailored to the timeline where the villain shows up. Young Leia is present in the Darth Vader deck and Leia the General makes an appearance in Kylo Ren’s. The 3D models, on the other hand, are not great. The designs aren’t bad, but the mix in the resins makes it seem like the characters have a pox of some kind and are due for some antibiotic shots. 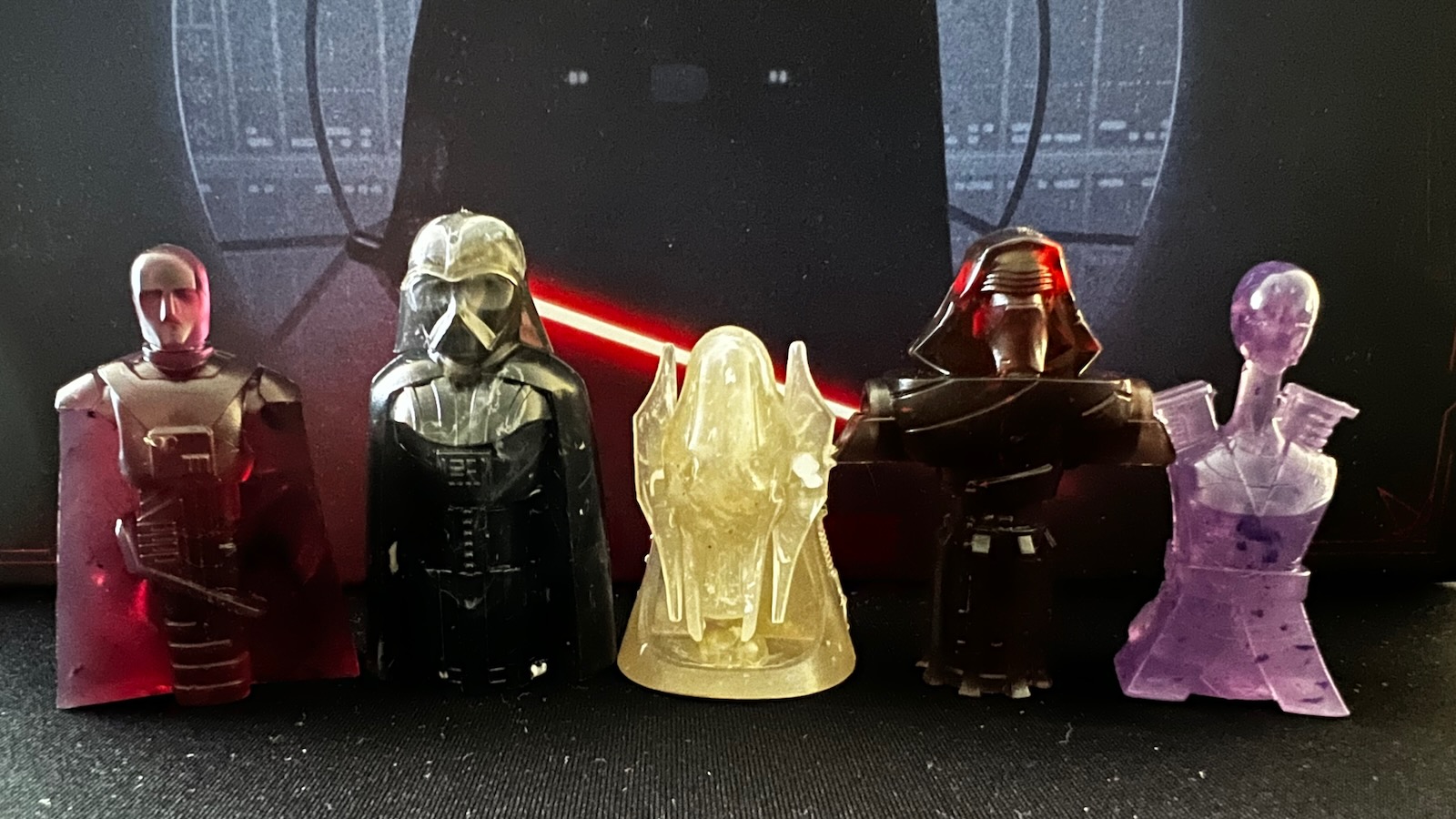 The gameplay on this entry falls a little flat. Other than the addition of the vehicle mechanic, it doesn’t have much going for it other than a reskin of the original version. In the playthroughs, this mechanic did not make a lot of impact and didn’t even show up for a couple of games. As with other versions, the game dragged on and it felt like we were making moves to help another player win so the game would end. One reason for this may be the asynchronous winning conditions for each character. New players have to learn how to play their character and how to thwart other characters effectively. For Star Wars lovers, this is a great entry point into the Villainous world and people who love Disney and Marvel Villainous will enjoy the new mechanics in this entry. However, the theme does not always cover the flaws.

Star Wars Villainous: Power of the Dark Side

Fans of the Villainous franchise will enjoy this Star Wars themed reskin and it is a good entry point for newcomers to the game. Fans looking for something new will be left wanting.