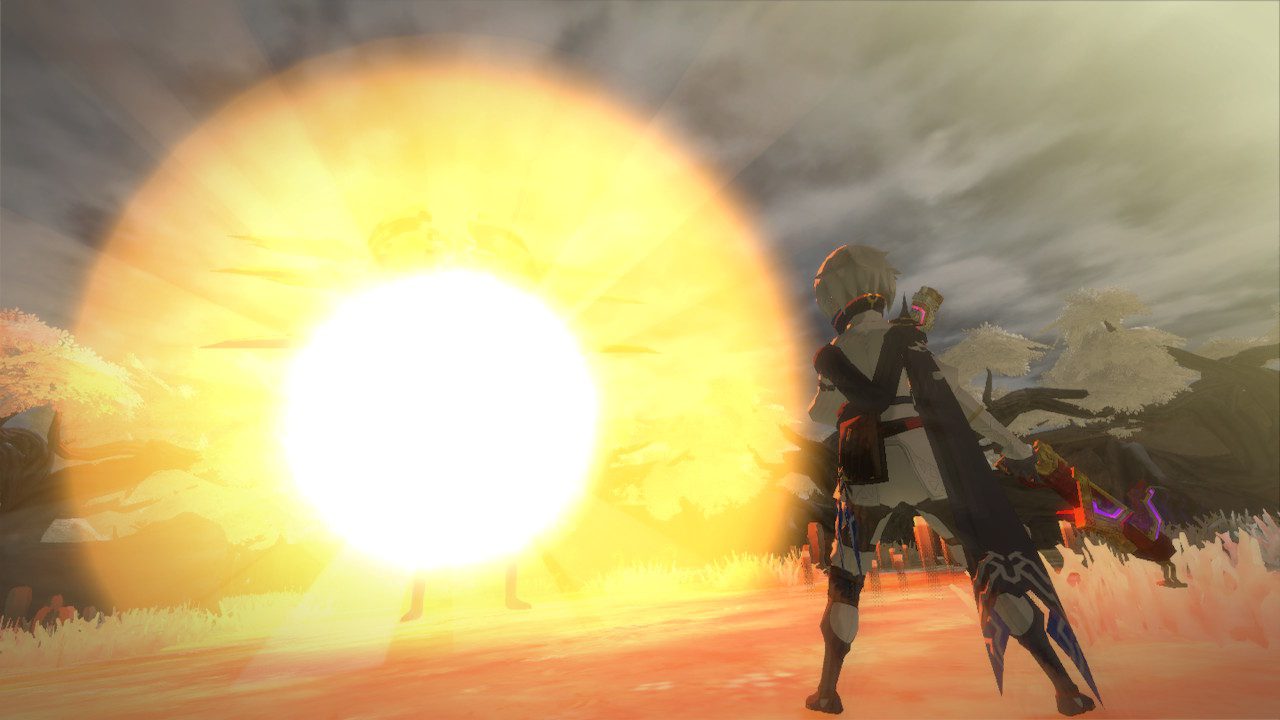 Have you ever had those jelly beans where half the flavors are normal, such as cherry, lemon, and blueberry, while the other half are disgusting things like earwax – but they all look exactly the same? Playing Oninaki is like trying to eat those jelly beans. It’s split between good and bad in every single aspect: story, gameplay, music, even the menus.

In Oninaki, you play as Kagachi, a man who, after losing his parents at a young age and meeting a mysterious ghost girl who’s lost her memories, decided to become a Watcher; a warrior who helps guide lost souls, or the Lost as the game calls them, to their next life by resolving their regrets before they become monsters, called the Fallen. The game takes place in a world and society that revolves around this cycle of reincarnation. If you can’t succeed in this life, there’s always the next one. This can lead the story to some very interesting places, that is, when it’s not spinning its wheels. At its best, Oninaki poses difficult questions about life, death, humanity, and what people would do if they knew a second chance was guaranteed after they die. At its worst, you’re surrounded by characters you don’t care about, spouting exposition that doesn’t matter. The plot constantly fluctuates between these two states. One minute, Kagachi will mercy kill a couple so they can go with their child to the next life, the next he’s getting some rocks from a mountain to fix some cannons that are literally never brought up again. I could forgive the poor writing in many places if the game at least went somewhere interesting with its plot, but after all the interesting situations and themes it just ends up being a typical RPG save-the-world plot. 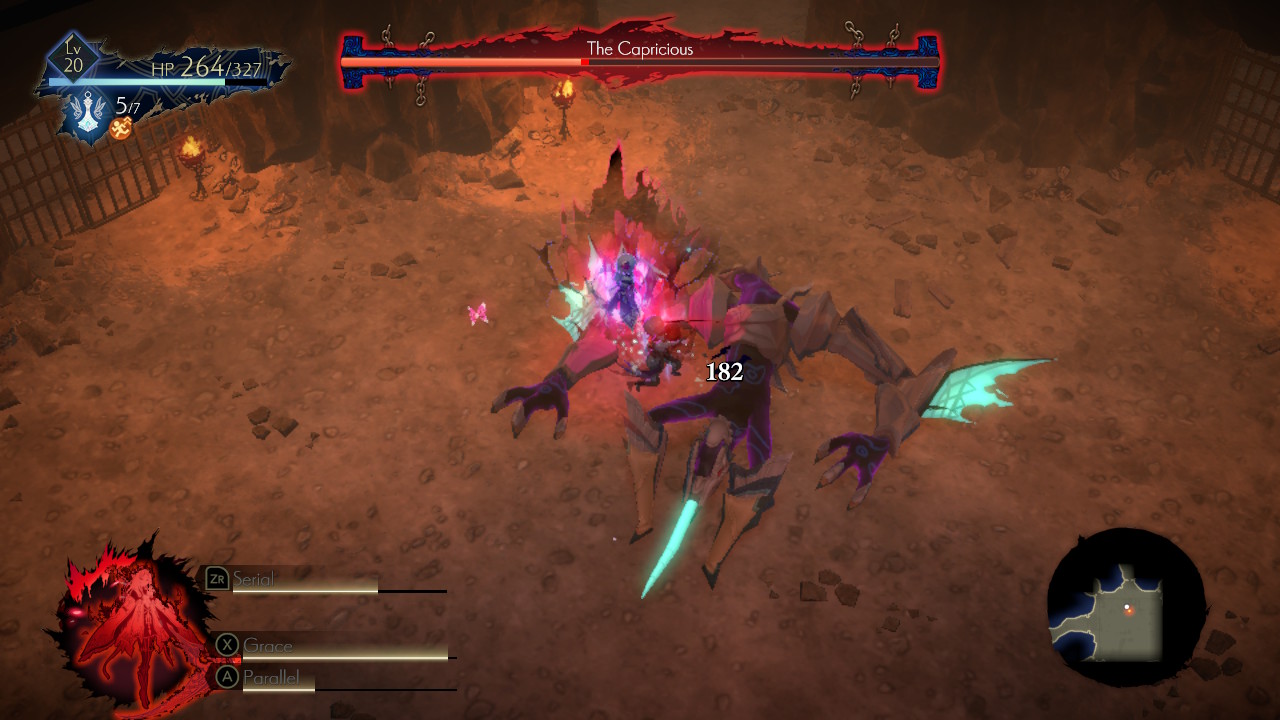 I won’t spoil anything in this review, but Oninaki constantly introduces plot threads it either resolves in the next five minutes or reveals new and interesting things about every few hours. This applies to the characters as well. There are quite a few characters introduced but only two end up being interesting: Kagachi and Linne, the previously mentioned mysterious girl. Kagachi meets Linne the night his parents died, and once again, years after becoming a Watcher. Linne hasn’t aged a day and is being pursued by another mysterious figure known only as the Night Devil. The relationship between Kagachi and Linne as well as their confrontations with the Night Devil are the main focus of the plot. Though it would be difficult to tell since the first half of the game focuses instead on several minor plot threads with little to no character development between the two main characters. Seriously, right at the halfway point they go from bickering constantly to acting like best friends, and they suddenly become much more interesting characters for the rest of the game. It’s just baffling how wildly the quality of writing can vary from moment to moment.

Speaking of wildly varying: the gameplay. Where most games would have a difficulty curve, Oninaki has a difficulty squiggly line. One dungeon you’ll be cutting through the Fallen like butter and killing bosses in a single hit, the next you’ll be stun locked into oblivion while dealing pitiful amounts of damage. Kagachi uses Daemons, the lingering will of lost souls who somehow didn’t become Fallen, to dispatch enemies using basic attacks, special skills which have short cooldowns between each use, and a Daemon specific movement or block skill. Each Daemon, you can have up to four to swap between during battle, has their own weapon, story, and skill tree that you can upgrade throughout the game. By fighting alongside a Daemon, you gain points used to upgrade their skills or unlock their memories, which you can view at save points, and gain access to even more powerful skills. There are quite a few Daemons to discover and use, but it would take quite a lot of grinding to level them all up, so I found four that I liked using and stuck with them. 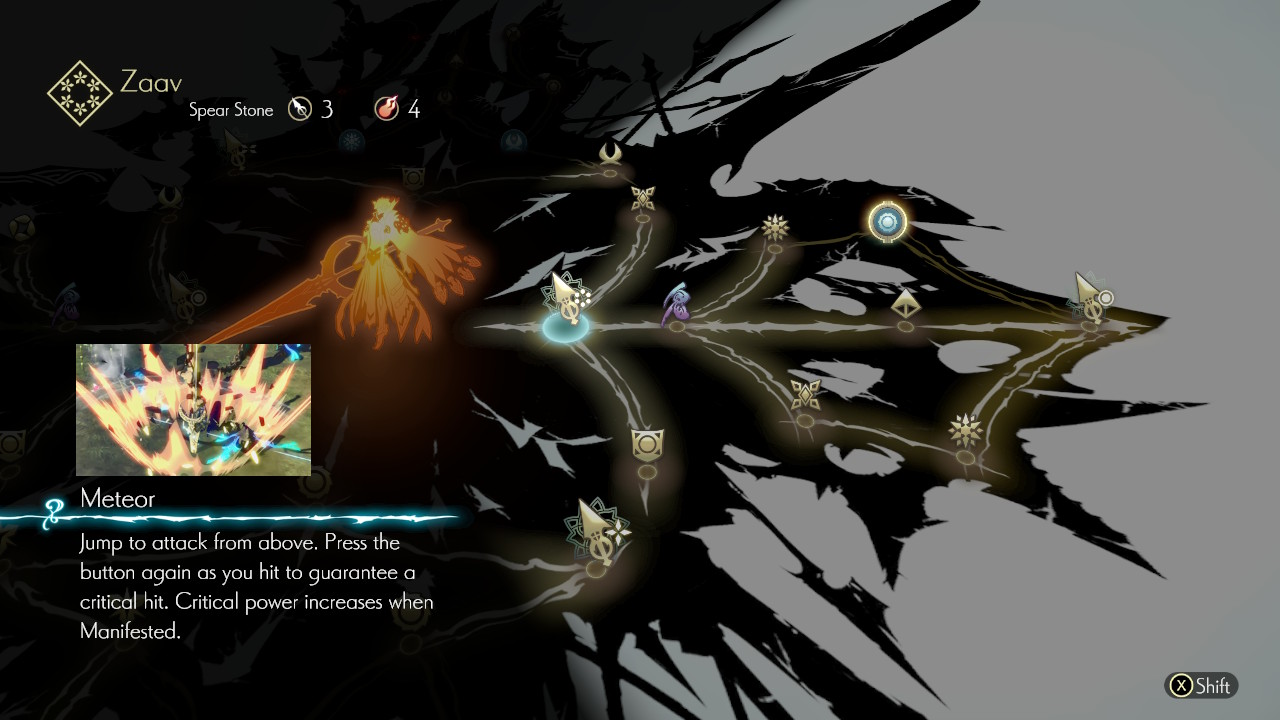 The skill trees themselves feature some beautiful art, half of which is unfortunately obscured by a shadow over the screen, but they are poorly laid out with skills seemingly placed randomly. Some very weak skills lie at the end of some branches while some powerful ones are placed in the middle. It’s also difficult to tell what some skills do or how much of an effect they have. For example: each Daemon can acquire a skill that reduces the amount of time to swap to them on the field. Swapping Daemons can take a decent length of time, so I assumed this would at most cut the time in half and deemed the skill not worthy of getting it, until I accidentally got it. I then discovered that it basically removes the time it takes to swap. After this, I started to take a lot of the buff skills and random chance skills and became completely overpowered against all but the most annoying of bosses, who would still stun lock me to death.

While the combat itself isn’t too interesting, you mostly mash the attack button while waiting for your skills to come off of cooldown, I found the most fun in coordinating my choice in weapons, gems which grant special buffs, and skills to become as powerful as possible. Because of this, I ended up sticking mostly to two Daemons. One who could build up the Affinity meter as quickly as possible, and another who gained a high chance of instant kills when consuming that meter to enter her Manifested form. This strategy gave the combat a nice rhythm to it, even if the levels you fight in are bland with enemies strewn all over the place. 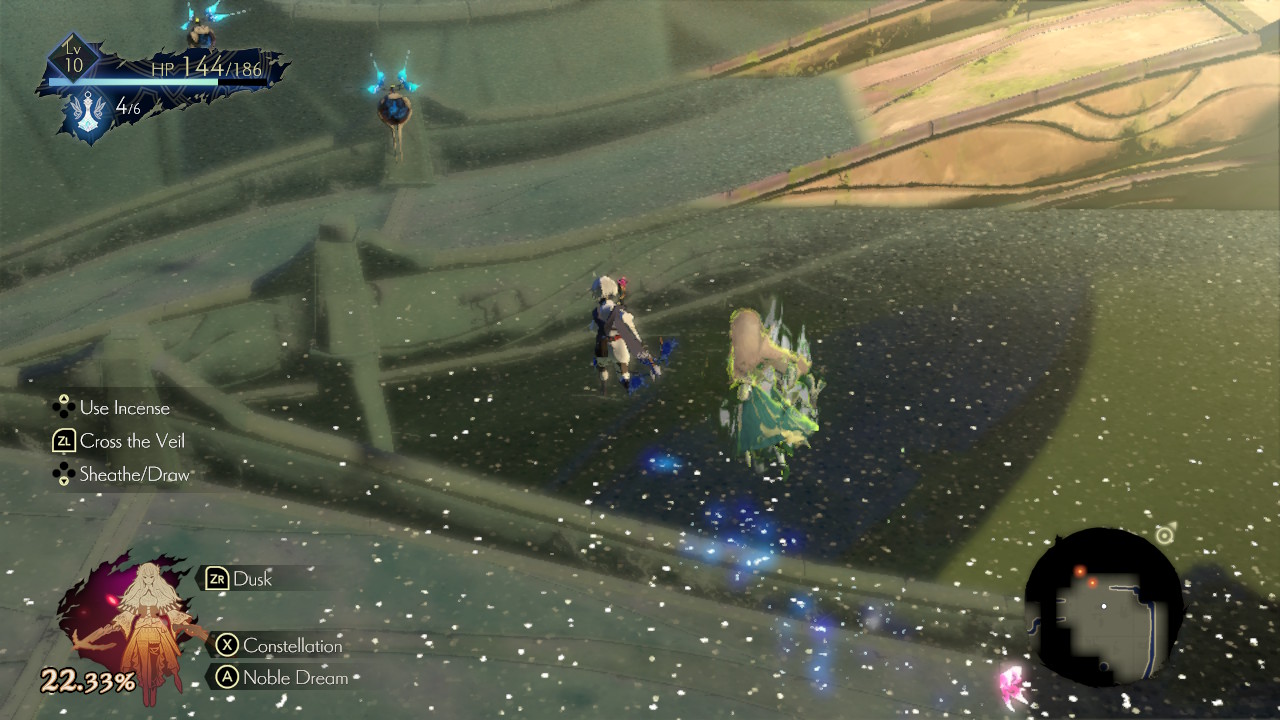 I could go on and on about how aspects of the game feel half baked. Like how the game has beautiful music that hardly ever plays or how the fantastic art direction is often obscured by unnecessary UI and camera angles. The game does quite a few things right, like being able to rebind all of the controls to any button you want, but just as many things wrong, like quite a lot of frame rate dips and stuttering on Switch.

All in all, Oninaki is the definition of a mixed bag. Half of the game is fun and interesting, while the other half is boring and poorly executed. With more polish and a rewrite or two, this game could have been something very special but as it is I can’t really recommend this to anyone, at least at full price.

Oninaki has one foot in the grave while the other doing a pleasant tap dance. It has an interesting story held back by bland characters and filler, and its gameplay can feel great when you’re not getting pounded in the face and stunned to death. Unless you can find it on sale, I’d skip this one.

David is the kind of person to wear his heart on his sleeve. He can find positives in anything, like this is a person who loved Star Fox Zero to death. You’ll see him playing all kinds of games: AAAs, Indies, game jam games, games of all genres, and writing about them! Here. On this website. When not writing or playing games, you can find David making music, games, or enjoying a good book. David’s favorite games include NieR: Automata, Mother 3, and Gravity Rush.
Related Articles: Oninaki
Share
Tweet
Share
Submit