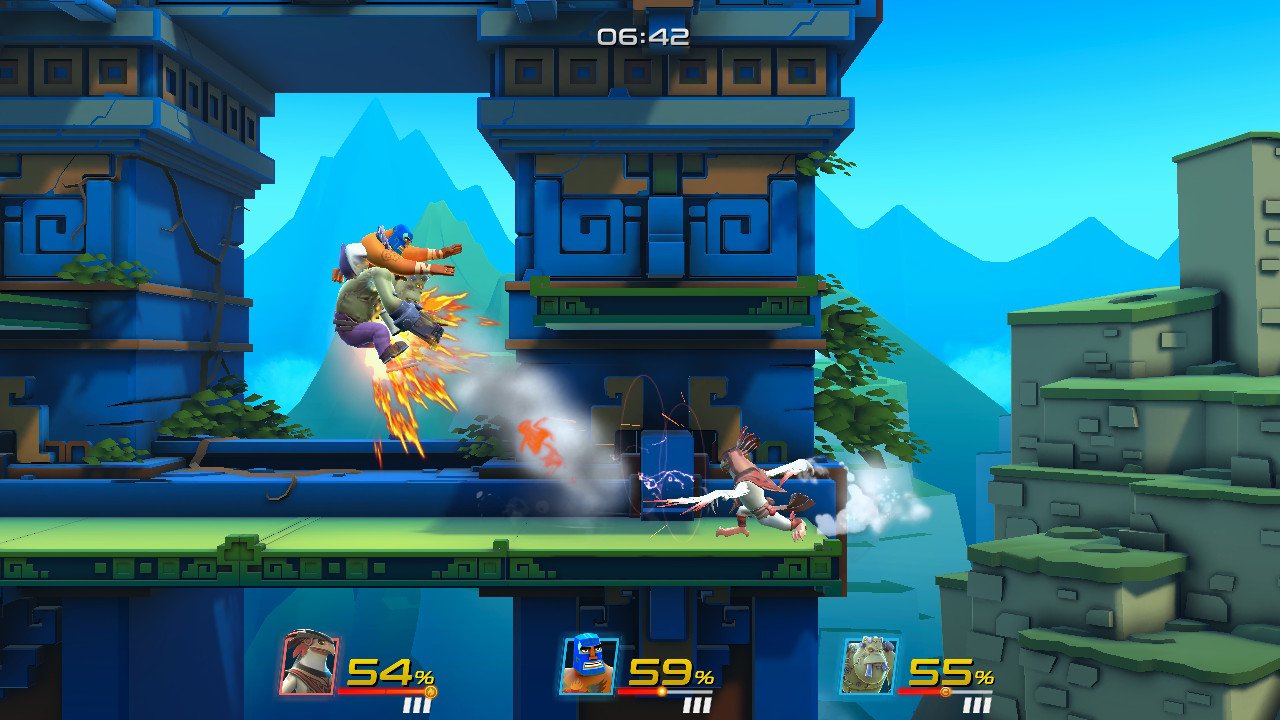 With all these enhanced Switch ports we’re getting, you’d imagine that fans are clamoring for a Smash 4 port or sequel. While we’re still a ways away from even an announcement for a new Smash, in the meantime we have Angry Mob Games’ Brawlout, which is a fun little clone that will appeal to dedicated fighting game fans as well as casual players. While lacking in presentation, it’s still an adequate indie game that will tide you over until Smash Bros. comes in.

Brawlout is a 2.5D fighter (which has 3D characters on a 2D plane) where up to four players can duke it out on different stages. Much like Smash Bros., you don’t have a traditional health bar in this game; instead, you must rack up damage as a continuously increasing percentage, which will make it easier to fling you or your opponents off the stage. The last person standing (or the person who KOs the most in timed matches), wins. Each character has regular attacks (which can be charged) and special attacks, which can be manipulated by maneuvering the analog stick on your controller. While Brawlout has a simple premise that casual and veteran fighting game fans can get into, there’s a lot more depth within its mechanics and roster.

The main thing that separates Brawlout from its competition is the fact that you cannot block at any time; instead, you can dodge, which can be chained in from certain special attacks. Only a select few characters can grab as well since it’s not a universal action in this game. In addition, you have a rage meter that builds up when you take damage or execute regular attacks (and conversely, depletes if you execute special attacks or get KO’d). This rage meter can cancel one attack when half full or unleash a rage mode, which will increase knockback of attacks for a certain period of time. These two differences encourage more aggressive offensive styles as opposed to defensive ones, and as a result can get more frantic than something like Super Smash Bros. Brawl at times.

This aggressiveness carries over to the roster, and it’s great to see that the characters take advantage of this change in speed. The initial roster of eight is a diverse one in terms of playstyles, from the grab-heavy Paco to my personal favorite, Chief Feathers, who can dive-bomb into his opponents and lob literal bombs to create a zoning approach. These designs are cartoony and distinct from one another in terms of aesthetic and moveset. The graphics while fighting are pleasing to the eyes, and convey bright and exciting colors whilst fighting.

While they have the same control scheme, each character has a unique set of moves with different properties. Volt, for example, exudes a Blanka-like electric aura and can use a bongo drum to conjure up a storm that can send enemies flying. Sephi’ra, on the other hand, is a fragile speedster that can lob sand traps to stop opponents in their tracks. In addition to the six original characters created for the game, you also have the Drifter from Hyper Light Drifter and Juan from Guacamelee, two guest fighters from a couple of beloved indie games. These two are excellent additions, and you can grind hours of gameplay just trying out each of the eight different characters. The initial roster feels very tight and varied, and is something that is closer to Skullgirls and Blazblue: Calamity Trigger (the latter two having a small but meaningful roster in its initial iterations). The core gameplay of Brawlout is refreshing, addictive, and rewards experimentation when playing against others.

I did have a fun time with the online multiplayer, which is one of the main modes within the game, and also one that grants more experience (more on that later). Reminiscent of Smash 4’s For Glory mode, random matches are tight-knit 1v1 skirmishes that are PvP connections rather than server-based. While this could cause some disconnection and stuttering (especially with a not so great connection), I had a stable framerate from my experience.

While it should be a great thing to have such a deep yet accessible system, the presentation and other issues surrounding the title are a bit noticeable. While the game favors a competitive atmosphere, with comprehensive mechanics and even stages that are mostly flat (think the variety of For Glory stages in Smash 4), the casual aspect can get shuffled away due to the dearth of options available for customization. Sure, you have the regular multiplayer modes where you can select timed or stock matches as well as team battles (and friendly fire, should you elect it), but the experience seems catered towards 1v1 matches rather than 2v2 or free-for-all ones. This feels especially true when the game stutters with more players on-screen, which is annoying at best and frustrating at worst. While I didn’t have too much of a problem with the in-game stuttering, it did put me in a weird situation where I would be open for punishment after whiffing an attack due to it.

Going back to offline modes, the lack of meaningful options extends to single-player as well. The main arcade mode is a randomized Mortal Kombat-esque tower of regular fights, and your difficulty determines how many opponents you’ll fight at once (one, two, or three depending on whether you choose easy, medium, or hard). The only problem here is that the AI difficulty doesn’t seem to change, only the number of opponents. However, because of the aggressive nature of this game, you can get pummeled pretty easily (and in hard mode, you can go from zero to KO’ed in seconds if you’re not careful). In order to do well in the hard tower, you’ll have to exploit weaknesses and spam moves, which isn’t strategic (protip: fighting Sephi’ra or her variants is great since her teammates are still affected by her sand traps). It feels rather uninspired, and the pre-battle and ending cutscenes for characters are voiceless and unremarkable. This cheap difficulty doesn’t really motivate me to finish these towers again and again (though Chief Feathers’ dive-bomb attack helped me dominate the hard tower), and it feels like Angry Mob Games could update single-player offerings past the quick battles. You can also watch replays of past battles, which is a nice feature, though it’s held back by the fact that you can’t save replays after a certain time (it only records a few battles which gets quickly overwritten).

While the initial character selection is superb, the unlockable roster and content feels a little less stellar. The total roster is in the double digits, but the rest are literally variants of the initial cast minus Juan and the Drifter. They admittedly look cool, and differ slightly in movesets (Vandal, for example, has a different up-B special compared to Volt, and it makes the character a tad more powerful), but still trigger the same pre-battle cutscenes and are little more than reskins. There are plans for adding more characters (and with addition of some excellent guest characters, this could easily be the indie version of Smash) as well as bug fixes, but in the meantime, you’ll have to grind in order to unlock the variants.

The reason I say this is because it is a lengthy grind. Each character has a mastery level that unlocks more character specific titles and stages once you fight with them. The problem is that it takes a while to unlock stages (one per character in the initial roster that reaches level five), and even longer to unlock variant characters. I would rather have character variants get unlocked by leveling up as well instead of this convoluted lootbox-like system (pinatas as they’re called here, though thankfully it’s an exclusively free in-game thing). There was also a glitch where I couldn’t play an unlocked stage (Drifter’s) until I unlocked an adjacent one (Chief Feathers’), so expect to play on the initial arenas for quite some time.

In the end, I’m conflicted about Brawlout right now. The game is a wonderfully deep platform fighter with accessible yet comprehensive mechanics, and something I’d love to bring over during game night. However, there are quite a few issues (that will be patched in the future) that keep me from universally recommending the title outright. For now, pick this up if you’re a fighting game fan or clamoring for some Smash-like gameplay on the Switch, but until then, just wait until an update is released.

In its current state, Brawlout is a competent Smash clone. While its frantic and deep mechanics are a fun time for competitive types, the overall lack of features can make the game feel empty at times. However, with promised updates and patches, this game could take the spot as one of the better fighting games on the Switch.

Elisha Deogracias is an aspiring accountant by day, freelance writer by night. Before writing for Gaming Trend, he had a small gig on the now defunct Examiner. When not being a third wheel with his best friends on dates or yearning for some closure on Pushing Daisies, he's busy catching up on shonen manga and wacky rhythm games. Mains R.O.B. in Smash. Still doesn't know if he's a kid or a squid.
Related Articles: Brawlout, Indies
Share
Tweet
Share
Submit