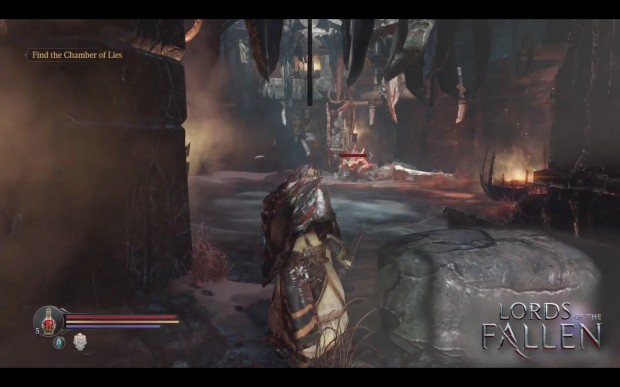 Imitation is the sincerest form of flattery, and the developers of Lords of the Fallen have made it no secret that they aim to recreate the magic of the Souls franchise. A series defined by brutal difficulty, ambient storytelling and a constant sense of despair, fear, and loneliness; Lords of the Fallen set quite a high goal, and it’s sad that it seems they weren’t able to make it all the way there.

The story of Lords of the Fallen follows Harkyn, a gruff no-nonsense criminal released to defeat an invading enemy known as the Rhogar. Most of the game takes place in the Keystone Citadel, a vast castle set upon a snowy mountain at the peak of the world. The story seems ambiguous at first, with only mere mentions of Harkyn’s crimes and little backstory given other than the Rhogar seek to destroy humanity.

There are developments, a few twists and turns, but they ultimately amount to nothing. The world is fairly uninteresting, and little inspiration was taken from the Souls series in creating a world that makes you wonder why everything has fallen to ruin. I cared little for Harkyn, and even less for the characters in the game. There are a few NPCs scattered about and a couple sidequests to complete, but really, this is a game focused on combat first, story second.

Harkyn is a businessman – you rarely have moments where he opens up or even expresses emotion.

As for the combat, it’s solid enough. You have a typical Souls control scheme, with light and heavy attacks, a dodge roll, a magic projectile-firing gauntlet, and the ability to two-hand or sword-and-board. Backstabbing is still the name of the game here, although the equipment and armor allow for a more tank-oriented player to hunker down instead of dodging and utilizing invincibility frames. Magic is also a tool at the player’s disposal, though the variety is rather interesting.

There are three trees of magic you select from at the start of the game, focusing on certain strengths. All three trees receive Prayer, which spawns a decoy that any enemy, bosses included, will blindly attack instead of Harkyn. I only ever found use in the Brawler tree, where the abilities seemed extremely overpowered. Ram is essentially a fireball that goes through enemy shields, Rage allows unfettered use of an unending pool of stamina, and Quake is just straight-up a lightning bolt that wrecks everything in eyesight. There’s really no room for subtlety or complexity in this magic system, a plus for some and a minus for others.

To be honest, most of the game’s combat feels much like the magic system: there is a sense of mind-numbing difficulty, but streamlined in order to not deter players who aren’t used to this sort of punishment. You’ll be challenged, but rarely punished. There’s a variety of approaches, whether you choose to strip off your armor and go fast and quick against the mightiest of bosses, or want to spam Ram on every minion in sight, and every strategy is viable.

The trade-off is that there is little of the depth or complexity that enraptured Souls fans in the past. There is little variety in weapons, outside of the addition of gauntlets. Gameplay is interesting, but you won’t see as many gimmick builds or min-maxing as you would in a Souls game. This is furthered by the fact there is no multiplayer in any form; the lack of invasion gameplay and one-on-one duels means that your primary means of perfecting combat is against minions and bosses.

The UI is a little more straight-forward than Souls, and pausing actually pauses your game, something newcomers will love.

Bosses are a major factor in any character action game, and even more-so in Lords of the Fallen. After facing encounter after encounter, your prowess and mettle is tested to the fullest by these monstrosities. The bosses are definitely special encounters, and stand out compared to the common fold of enemies. They’re difficult, and you’ll bang your head against the wall a few times trying to pass them.

To be frank, the bosses of Lords of the Fallen are just not memorable in the slightest. It doesn’t help that they’re given little to no backstory, and labeled simply as “Commander” or “Worshipper” or “Infiltrator.” Souls games often had memorable encounters, heightened by the lore leading up to them and given meaning by the events of the game; battles against titans like Sif, Gwyn and Artorias have meaning behind them, and are a culmination of the player’s actions. The Rhogar bosses feel arbitrary, as do the rest of the bosses in Lords of the Fallen. They act as an end goal, a finish line, but signify little more than that.

While the bosses look cool, they don’t serve any real purpose outside being another wall to break down.

Lords of the Fallen can’t be painted over as simply a Souls copy, however. It does a few things to expand upon and innovate the mechanics of the pseudo-genre, and it does these well. The experience system of Lords is similar to the soul-collecting mechanic, where experience is earned from enemy kills and completing objectives, and dropped on the ground upon death.

You not only have to recover these after your respawn, but you only have a certain time-frame to do so. The experience will gradually decay after some time, and eventually disappear. You also gain experience multipliers and extra loot the longer you hold onto your experience, at the cost of potentially losing it. You can “bank” you experience at checkpoints, but even this has it’s own set of risks. You can apply experience towards either a point for your stats or a point for your magic. These mechanics create a constant risk-reward balancing act, and is very fulfilling. I often found myself questioning whether to bank my XP into that spell point I was aiming for, or potentially lose it all in an upcoming boss fight where I wouldn’t have a good opportunity to reclaim my points.

While there is some green and scenery to see, most of your trek through Lords will be filled with castle halls and mountains in the background.

Graphically, the game is beautiful on high-end PCs. Console versions suffer from framerate issues, but on the standard gaming computer, this game will run at a clean 1080p at 60 FPS. The kicker for PC users is that they should prepare to deal with a wealth of bugs and glitches. In my time with the PC version, I had several game-breaking bugs, which lost me massive amounts of progress and several chunks of hair. Also, camera control is abysmal in most hallways and corridors. While you have control of the camera, the automatic pans and swings around for backstabs or dodges are really annoying to deal with while you’re managing a million other things on-screen.

Overall, Lords of the Fallen captures the Souls essence in a base sense, and provides a nice entry point for those intimidated by the series’ infamous difficulty. Where it failed to capture its inspiration’s essence was in the lore and storytelling, both of which fall flat in Lords. This is an enjoyable romp through a series of difficult bosses, and it does a nice job of making you feel like you’ve grown from a measly warrior to unstoppable force by the end of the game. Just don’t expect the same depth that inspired the fanatical cult following of the Souls games.

Lords of the Fallen

Lords of the Fallen serves as a solid entry point to those toeing the waters of the Souls franchise, but simplified systems, a shallow story and forgettable bosses keep this game from dethroning the greats.

I'm a Texas native and graduate of Texas Tech University, freelancing in the gaming journalism industry. I love games, live music, Texas BBQ and sports. Favorite games are The Witcher 2, anything from Bioware, the Kingdom Hearts series and Dota 2.
Related Articles: Lords of the Fallen
Share
Tweet
Share
Submit