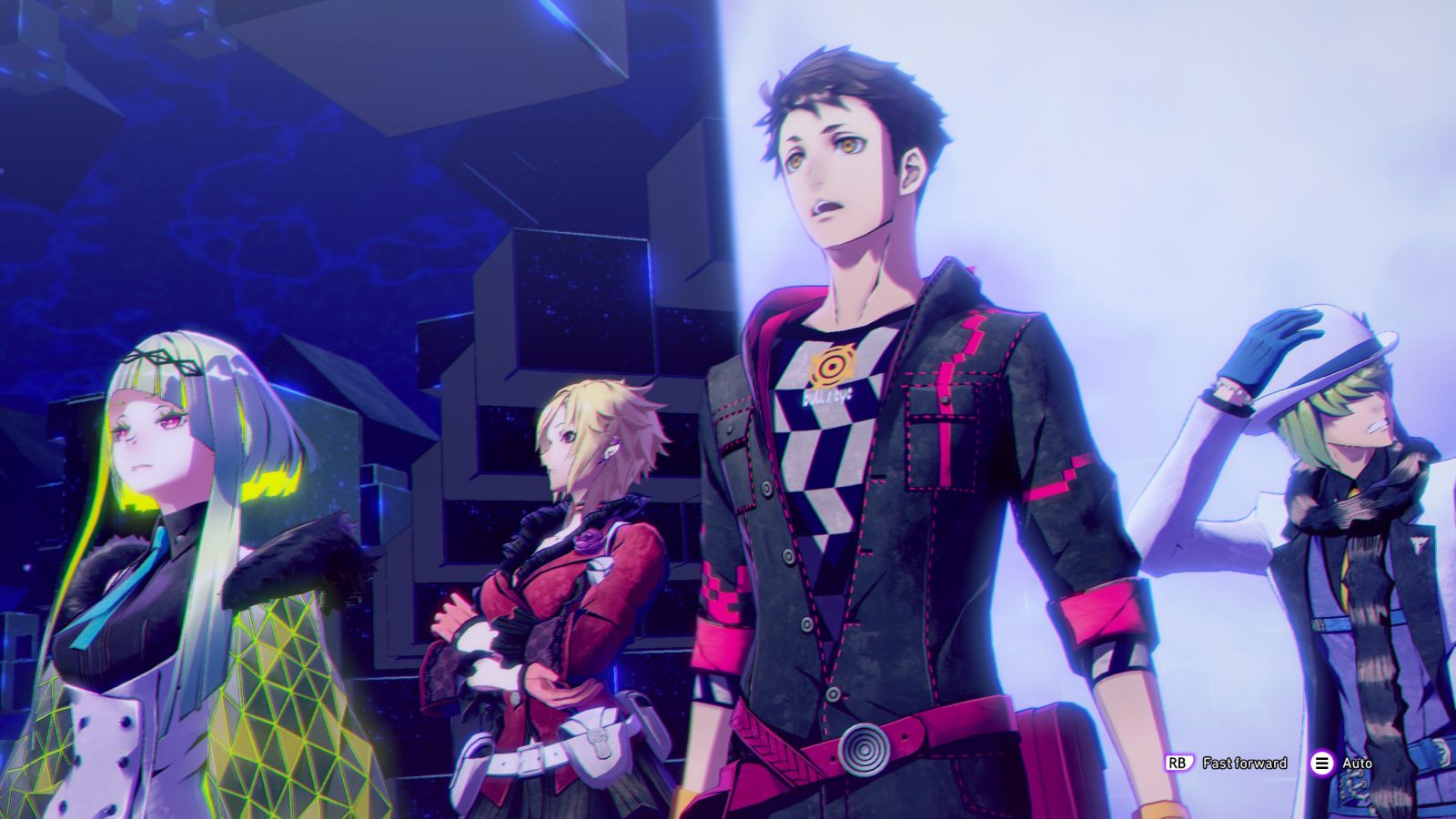 The world is going to end. The AI system Aion, conceived at the limits of all human knowledge, has determined that its policy of non-intervention must be circumvented. To prevent the apocalypse, it has created two splinters of itself in the form of humanoid women: Ringo and Figue. The world depends on the survival of two individuals, both of whom are already dead upon their arrival. Left with no other choice, Ringo Soul Hacks one of them, a Devil Summoner named Arrow, reviving him. In a series of unfortunate events, Ringo is forced to Soul Hack two other summoners, Milady and Saizo, and Figue receives a mysterious Covenant – one of five that are said to summon the Great One when gathered together. This group of unlikely allies now has a single goal: prevent the Phantom Society from getting the covenants and ushering in the apocalypse.

Soul Hackers 2 is the sequel to Shin Megami Tensei spinoff Devil Summoner: Soul Hackers, originally released for the Sega Saturn in 1997. It was rereleased for the Playstation, but the west wouldn’t see the game until the 2013 remake for the 3DS. Before then, our first exposure to the sub-series was *big breath* Shin Megami Tensei Devil Summoner: Raidou Kuzonoha vs. the Soulless Army in 2006 as well as its sequel two years later. Now you don’t need to know or be familiar with any of those games, especially seeing as Soul Hackers 2 has ditched both the SMT and DS monikers, but Raidou is always worth mentioning and there are nods and cameos here.

Yes, Soul Hackers 2 is its own self-contained story, but to be honest that story isn’t particularly interesting. I can understand most of the characters spouting exposition in cutscenes at the beginning of the game – I’ve played through my share of slow starts – but by hour 15 it was clear the writing relied on the voice actors to make it interesting. It’s not only that the plot is very predictable, but that the characters just don’t have much to them. There are some cute lines, like when Ringo says “Soul Hack! …kinda” when casting a revival spell in battle, a recurring bit with Mothman in one dungeon, or the babe bot, but that’s about it. Saizo’s story is mildly interesting, dealing with his relationship with an ex in the Phantom Society, but he’s the exception rather than the rule. Almost all dialogue is expositional in this game, and the exposition will often repeat itself two or three cutscenes in a row. It’s clear a rich history has been developed for both the characters and the world, but Soul Hackers 2 fails at conveying any emotions behind it.

The character designs themselves are fantastic, each character’s look perfectly conveys their personality. The 3D models are also super stylish, with sharp lines and features reminding me of lower poly GameCube games or the more recent indie game Necrobarista. Ringo’s design especially is a highlight, with a glowing neon undercut and leggings that turn into her gun and sword. Environments look distinctly cyberpunk as well when you’re not going through yet another subway dungeon. The town has a lot of neon and that typical Asia-fetishizing aesthetic we can’t seem to separate from the genre, though it’s easier to forgive in a Japanese game. That said, there’s not much to do in town. You can buy equipment upgrades, accept side quests, and fuse demons but you can get through most of the game on hard without doing much of that. Demon fusing is especially frustrating as you can never tell what skills, if any, a demon can pass on in fusion. 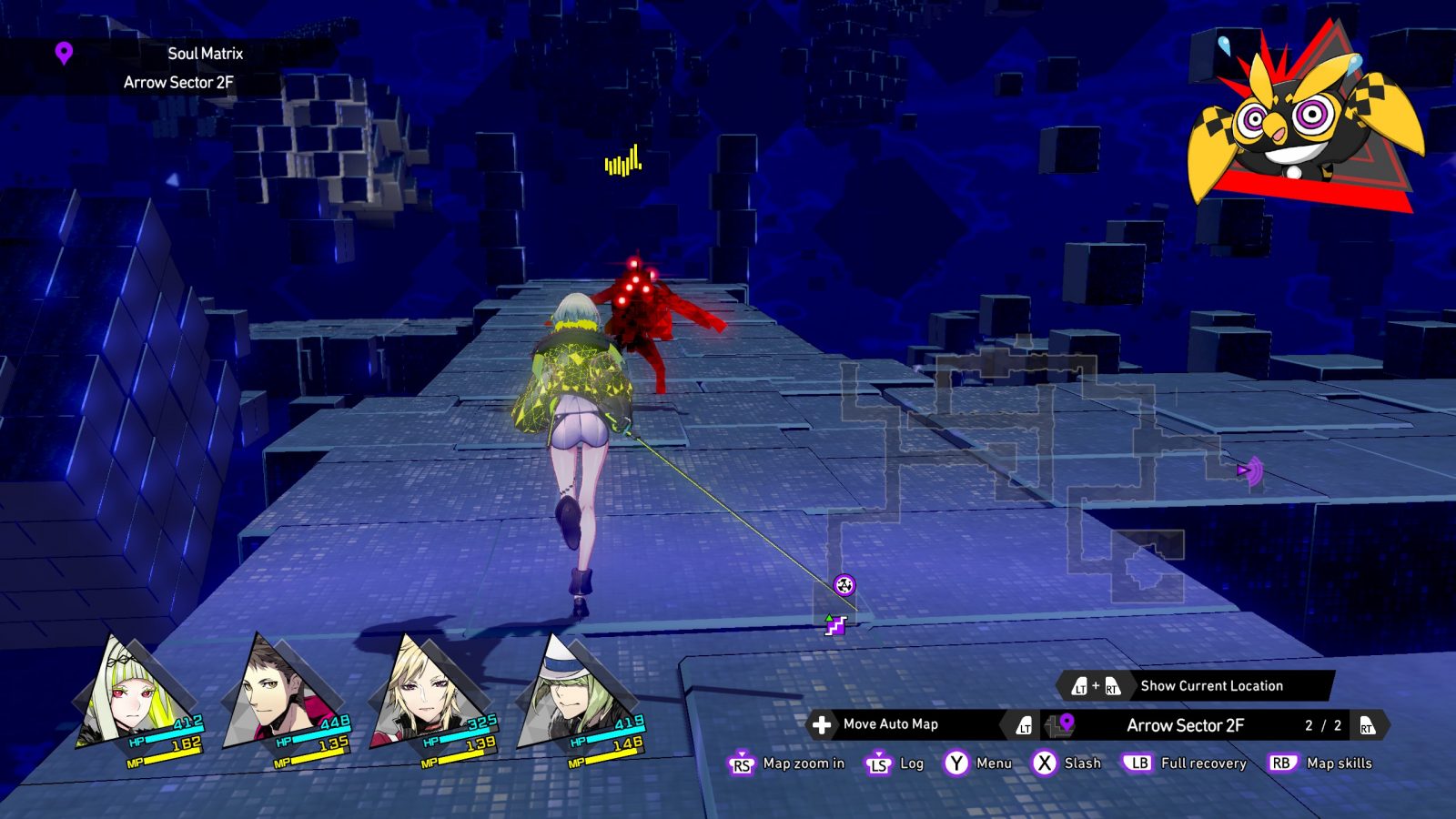 Aside from demon fusion downgrades, none of this is a huge departure from a few excellent SMT games – the storytelling has always been a little vague and the games mostly focus on combat. Sadly, Soul Hackers 2 strips any depth from its battle system and it becomes a chore to fight anything. Unlike its predecessor, you don’t directly summon demons to aid you in battle. Instead, your four party members can each equip a single demon to modify their stats and use the accompanying skills. It’s a bit like early Personas, and you can even swap out on the fly using Commander Skills. This does have the consequence of making each character feel the same, but you can customize them slightly with certain pieces of equipment and upgrades to make them better at using certain elements like fire, buffs, healing, physical, and gun. Still, they all largely feel interchangeable and this customization matters little.

Battles are turn based, with your crew of four acting before the enemy does. You can press A to bring up your currently equipped moves or Y to have the game pick whatever the enemy is weak to. You can guard with B and use items with X, but you’ll rarely ever do any of that and just hit Y every time. If you don’t have a weakness equipped, you can swap demons, among other useless things, using Commander Skills, though only if Ringo is still alive. You gain one commander point in each skill per turn, but that’s essentially a non-issue as the most basic skill only takes one point to use, allowing you to swap out a single demon which will then steamroll the enemy. While exploiting weaknesses is the name of the game, you can ignore even that once you get a Megido move, which will do much more damage per turn than most stacks. Battles feel like matching shapes to holes, but everything fits through the square hole so you don’t need to think. 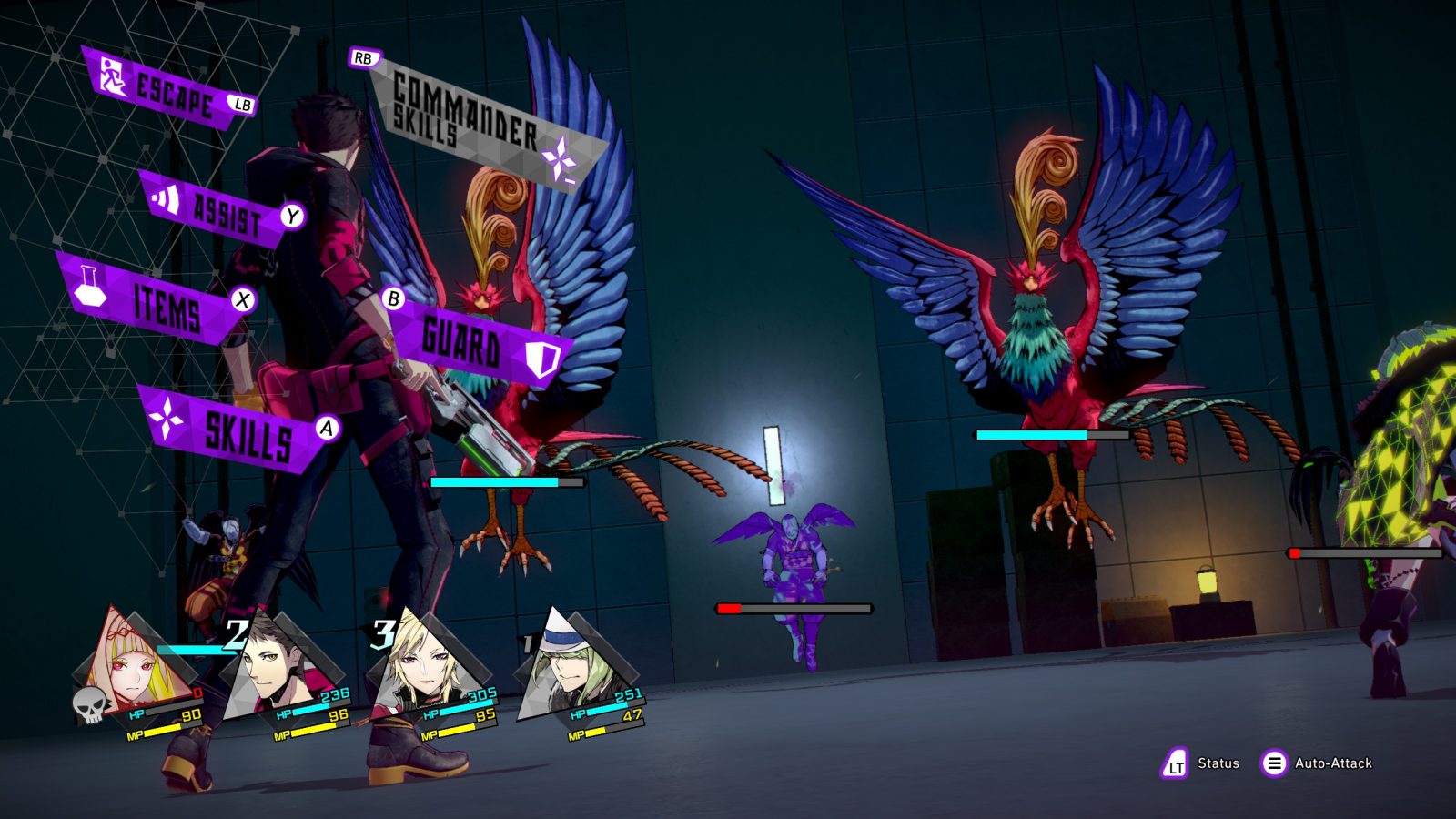 Instead of crafting a team of specialists, you simply target each foe’s weakness in battle every single turn, adding to your stack which will then be used in what’s called a Sabbath at the end of your round. A Sabbath is simply free damage with the possibility of special effects like putting enemies to sleep or healing the party. It’s not like getting extra moves in the Press Turn system or a big dog pile like All-out attacks either, it’s just free, unaspected damage requiring absolutely no thought or strategy. Once again, all you do in this game is exploit weaknesses, which is made even easier by the Assist button which will automatically target a weakness. If your character doesn’t have the right element, you can easily swap out their demon right then and there, or even swap the whole party at once when you progress far enough in the story. Put simply, this battle system is incredibly boring and stays exactly the same from beginning to end.

Another saving grace could have been having to manage HP, MP, items and such as you progress though ever longer dungeons, but that is also negated by both the lack of difficulty even on hard and the numerous checkpoints throughout each area. You can use any of these checkpoints to teleport back to the world map, which is just a long list of places with little organization, and rest at the hideout. Then you can just teleport right back where you were with full HP and MP. 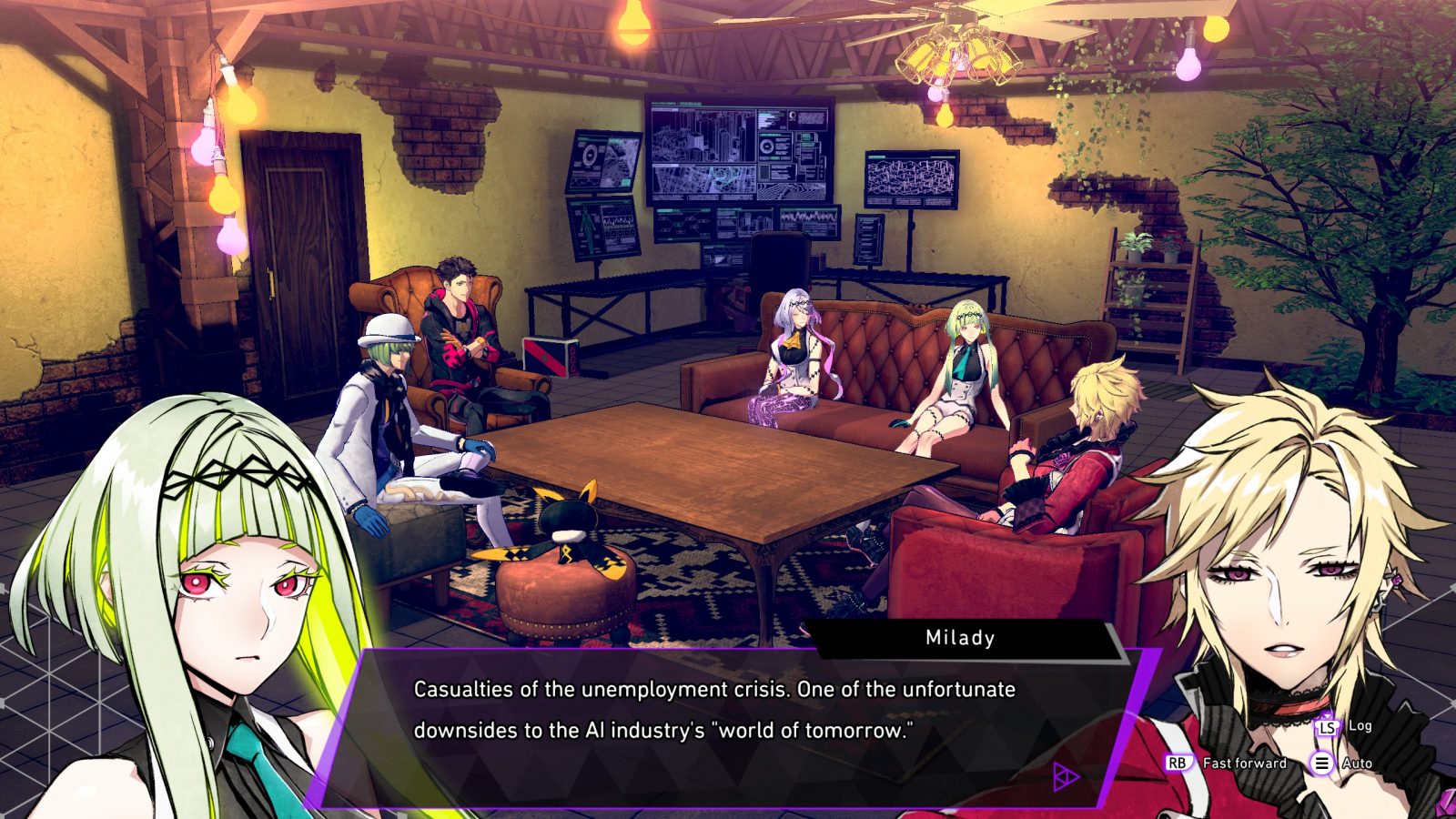 Boss fights don’t add much either, as every single one is just dealing with the additional enemies the boss summons while slowly whittling down their health. Near the end of the game, this took me about 20 minutes. It wasn’t hard, it just took a long time. As far as I can tell, this is the optimal way to fight them too as killing any of the adds will have the boss resummon them at full health for free.

Enemy encounters are also incredibly easy to avoid. As you explore the four types of dungeons, you can press X to slash any red creatures representing an encounter. You can then walk into them to start a battle with advantage, or simply walk around them to avoid it entirely. There are purple variants you can’t slash, but you can also despawn those easily by talking to one of your demons on scouting duty, who will heal you, give you key items you need to progress, and items to craft upgrades. These demons will also scout new demons for you to recruit, but demon negotiation has also been watered down. There’s no longer any chance of failure, and instead you just give them what they want and they join you or you don’t. I can understand some people finding negotiation obtuse or annoying, but this is not the solution to that problem. It removes all personality from the mechanic, and the same could really be said of the whole game. 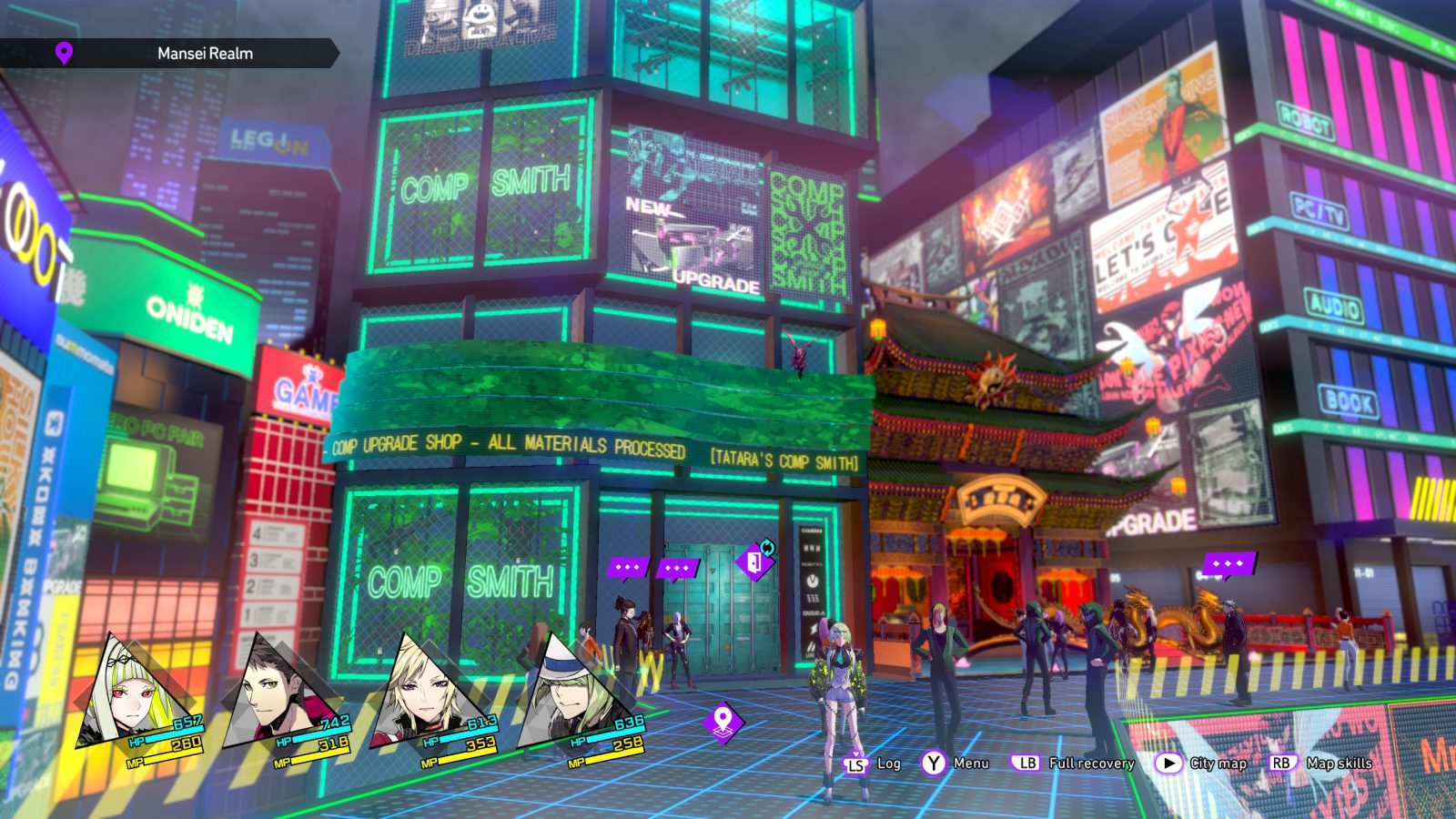 The game will try to inject some personality by never shutting up, but that completely backfires because characters constantly talk over each other, and they never SHUT UP. Every single button press in battle is accompanied by one or more voice lines. Early on, exploring gives you a much needed respite (though with the single, repetitive dungeon theme), but that is quickly dashed by the introduction of an owl drone that Figue pilots. She’ll warn you about enemies that spawn and if they’re following you, but this is completely pointless because enemies will never surprise you by spawning behind you. You just have to put up with her for the rest of the game.

The music doesn’t really help either, as it’s just as uninteresting as the rest of the game. Absolutely no tracks stood out to me, and the only thing I enjoyed listening to was the song included with the Persona 5 outfit DLC, Blooming Villain. That’s not from this game, so it doesn’t count.

Soul Hackers 2’s only saving grace is its visual design. The characters look cool, the town is interesting, and the UI is somewhat stylish, but that’s it. It’s not broken or anything, just incredibly uninteresting. There’s absolutely no substance to the story, characters, battle system, or level design. It’s such a shame, because that style is very appealing, but there’s absolutely no reason to play the game otherwise.

David is the kind of person to wear his heart on his sleeve. He can find positives in anything, like this is a person who loved Star Fox Zero to death. You’ll see him playing all kinds of games: AAAs, Indies, game jam games, games of all genres, and writing about them! Here. On this website. When not writing or playing games, you can find David making music, games, or enjoying a good book. David’s favorite games include NieR: Automata, Mother 3, and Gravity Rush.
Related Articles: Soul Hackers 2
Share
Tweet
Share
Submit