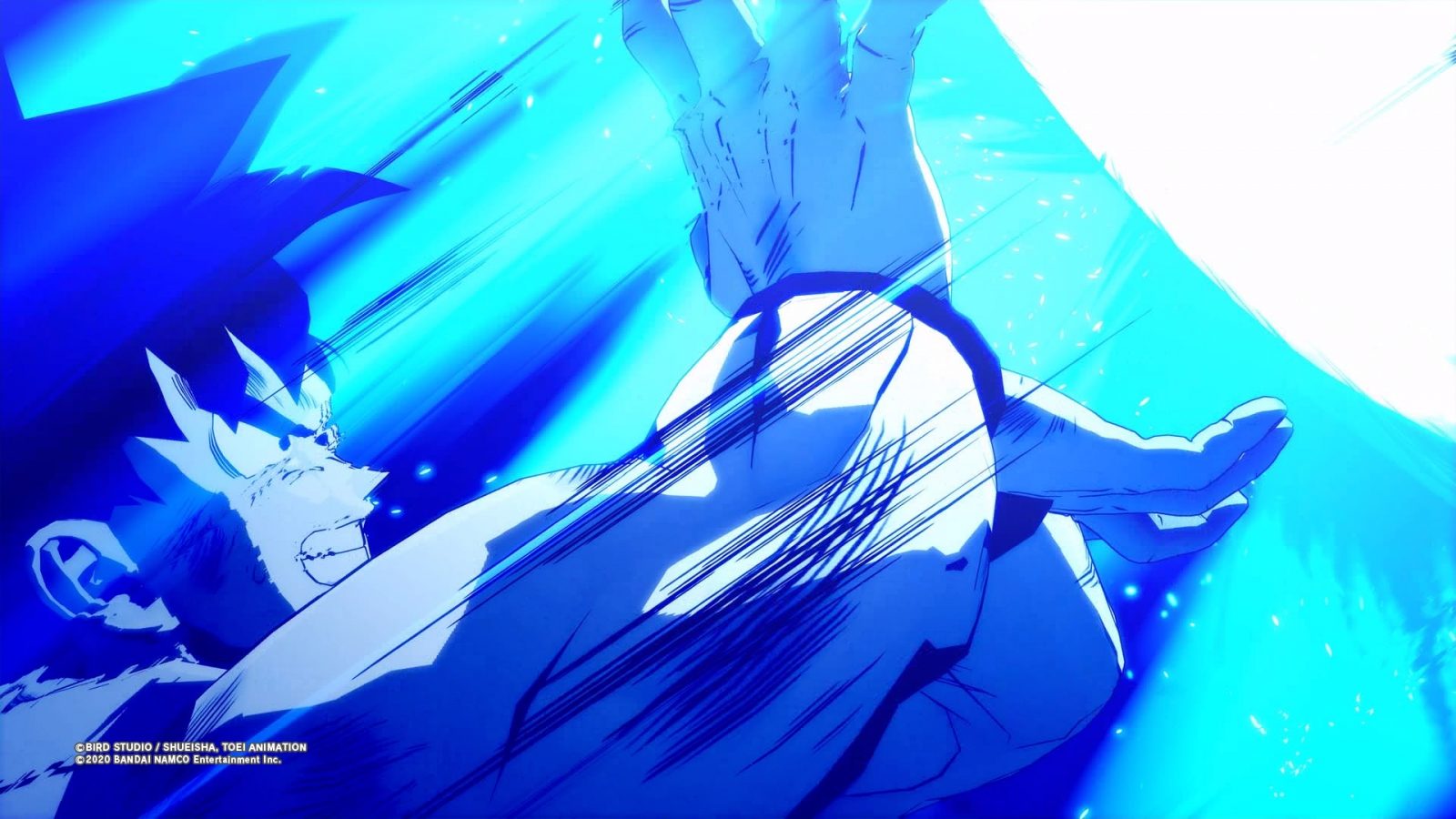 It’s a tale as old as time: hero learns that he is a member of a tremendously strong alien race, dies, gets brought back to life, and saves the universe several times with the help of several foes-turned-allies. We must have gone through a dozen different iterations of the Dragon Ball Z story being told, but none of them tend to scratch that itch just right. There is always an abundance of liberties taken to streamline the gameplay to make it a focus on fighting. This is, of course, because most of the Dragon Ball Z games are fighting games. However, Dragon Ball Z: Kakarot is not a fighting game. It’s an action-RPG, and there is definitely an emphasis on the RPG aspect. 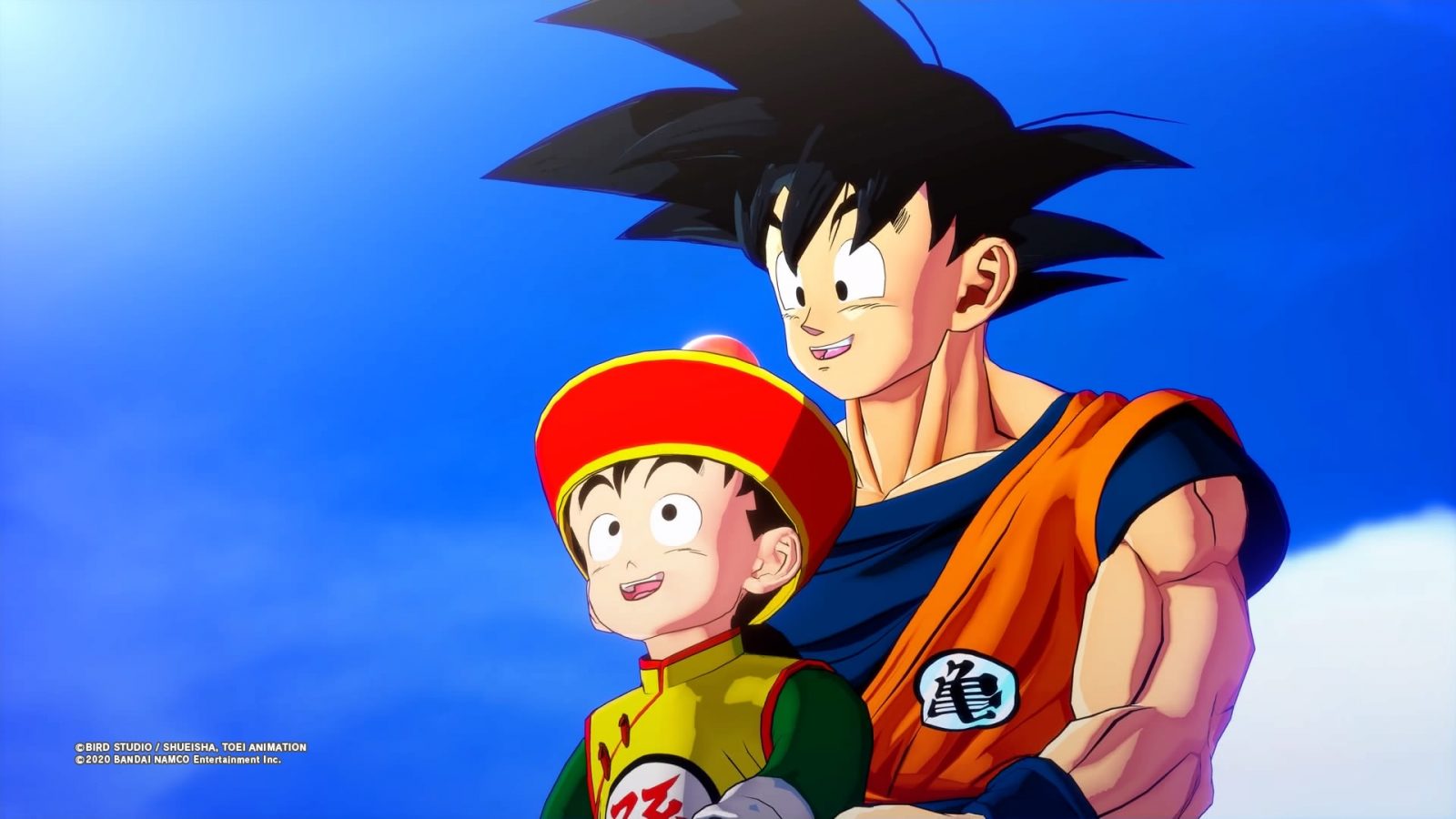 While the game starts off with a brief tutorial, the only “teaching” it does is through quick pop-ups. These can be viewed at any moment, but you’re pretty much thrown to the wolves, especially through combat. But honestly, it’s okay because the combat is deceptively simple. There is a button for a melee attack, ki attack, block, ki charge, and dodge. You can also hold down one of the left shoulder buttons to select a special attack and the right shoulder button to select an assist attack from one of your allies. Later on, you can hold both down to choose a transformation, which increases attack in exchange for gradually decreasing health (Kaioken) or ki (Super Saiyan). 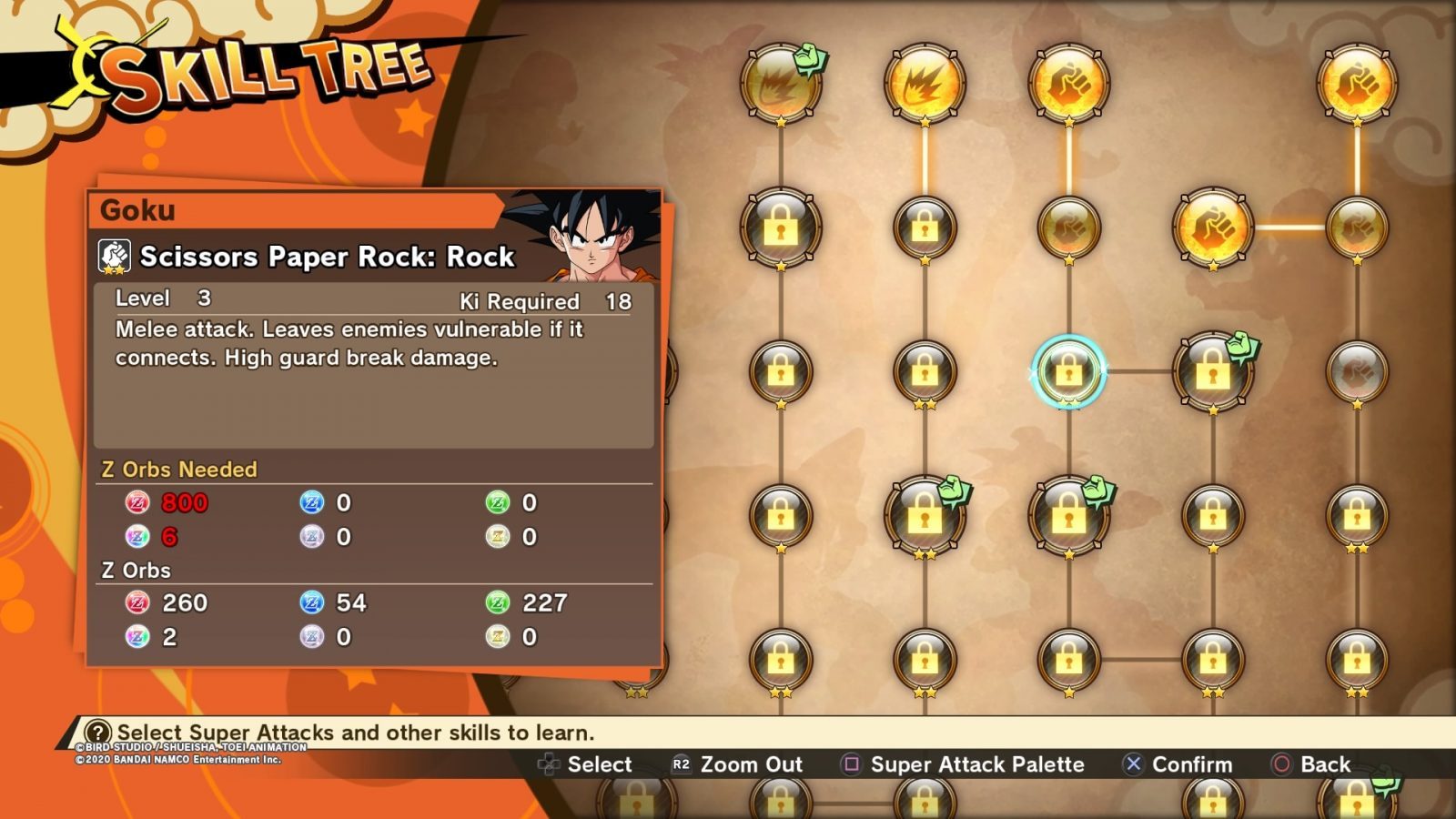 As you progress, you’ll unlock more abilities or have the opportunity to earn them through training.

With dozens of titles focusing on fighting, it’s interesting to say that the fighting mechanics are not the highlight of this game. As a Dragon Ball fan, the biggest draw of this game is how it presents its story. While this isn’t the first time the series has told the story through a video game, it’s easily the best representation. It may at times be cutscene heavy, but it adds supplemental sidequests that only succeed in worldbuilding. 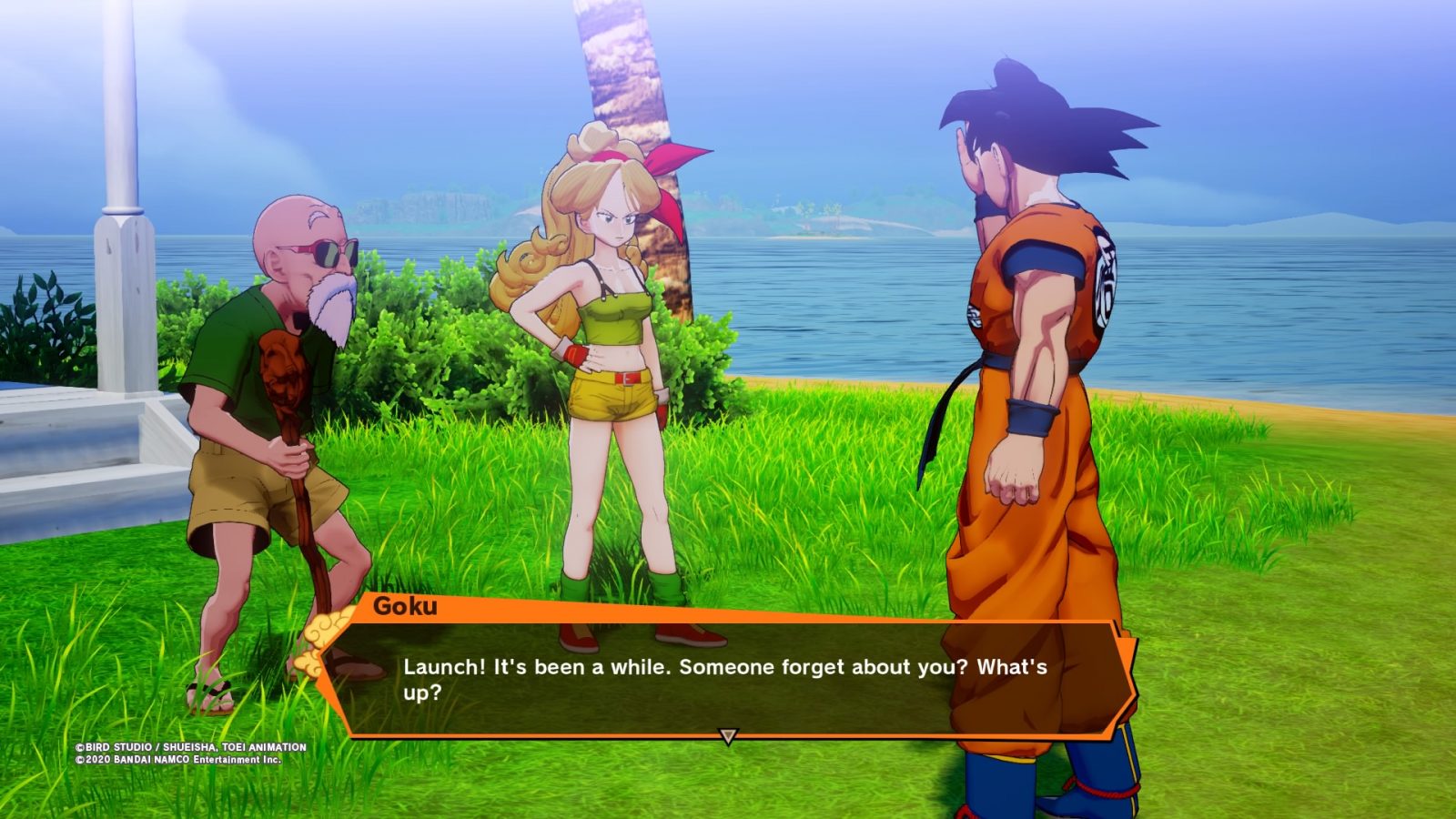 We all forgot about you Launch, and for that, I’m sorry.

For example, while on Namek, Gohan is on his way to obtain a Dragon Ball in the distance when he can run into a young namekian left alone after his village was destroyed. He was hungry, and namekians only need water to survive, yet his body had stressed him to the point where he needed more. It was both an interesting way to give off more lore about the namekian race while having the player scavenge around for new ingredients to cook with. 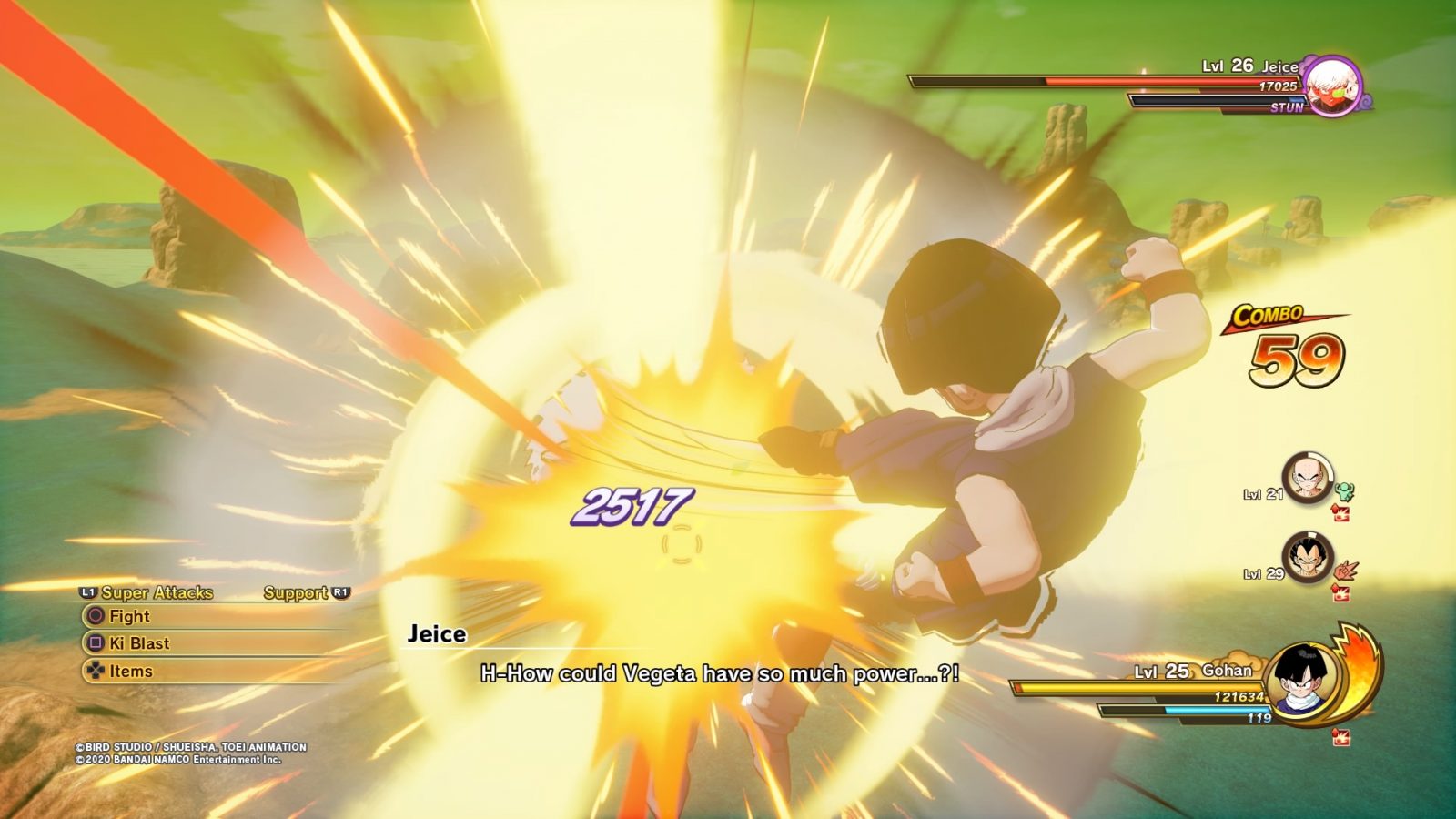 With cooking buffs I can pack a better punch, but only temporarily.

Like several other action RPGs, you can cook with different ingredients to give temporary buffs. This is useful for when you’re stuck on a boss or if you want to dispose of the enemies you encounter around the world quickly. You can also increase your status with the “community board.” Through this feature, you earn Soul Emblems of characters and place them into one of several communities to unlock bonuses. These communities give bonuses such as attack bonuses, defense bonuses, EXP bonuses, and more. Different soul emblems work better in different communities, and placing them next to other characters will provide an even better bonus, like when you place Gohan next to Piccolo or every member of the Ginyu Force together. I’ve noticed an impact in how I perform with these bonuses, so it’s very important to place every new emblem you get somewhere. And they can be moved around freely, so it’s fun to experiment. 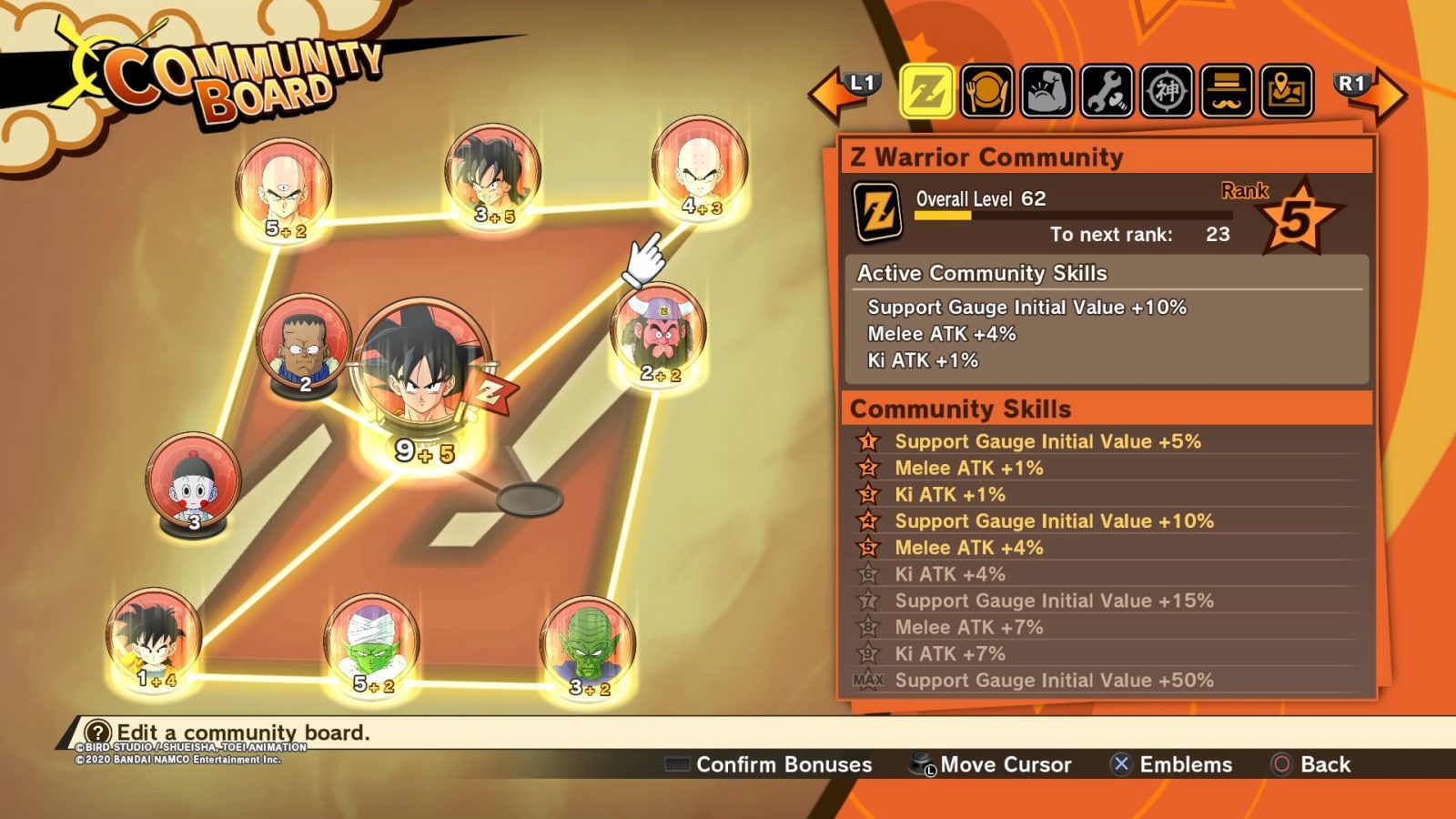 Goku can’t be moved from this community, but connecting him to Gohan provided a small bonus.

Just when you think you’ve figured out everything there is to Dragon Ball: Kakarot, the game throws more at you. Eventually, you’ll be able to build a car (which is a bit silly when you’re able to fly) and unlock a better training room where you learn unique skills in your skill tree. Normally, these skills are unlocked by using Z orbs, which are found around the world, or by completing normal training exercises. However, these special skills are only available through the training simulation. 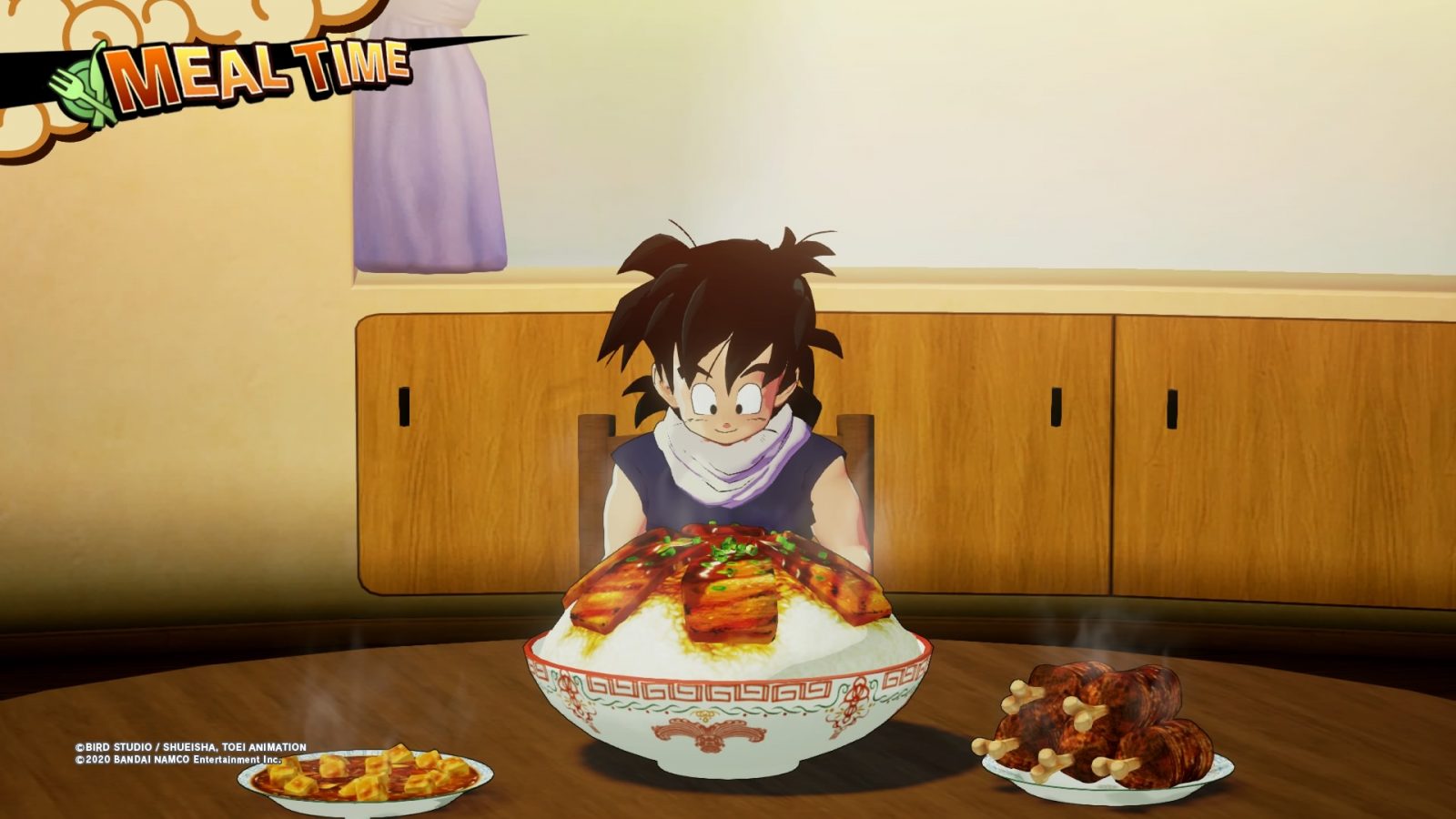 Grinding for ingredients almost feels worth it to get a meal that looks this delicious.

Of course, this wouldn’t be Dragon Ball Z without the Dragon Balls. Part-way through the game, you’ll be able to hunt down all seven Dragon Balls. This is best done during intermissions when you have a wider range of characters to play as, but in some instances you can do it in the main story. When all seven are gathered, you’re able to wish for more Z orbs, money, a rare item, or, my personal favorite, to revive an old foe. This creates unique dialog and also allows you to earn their soul emblem. 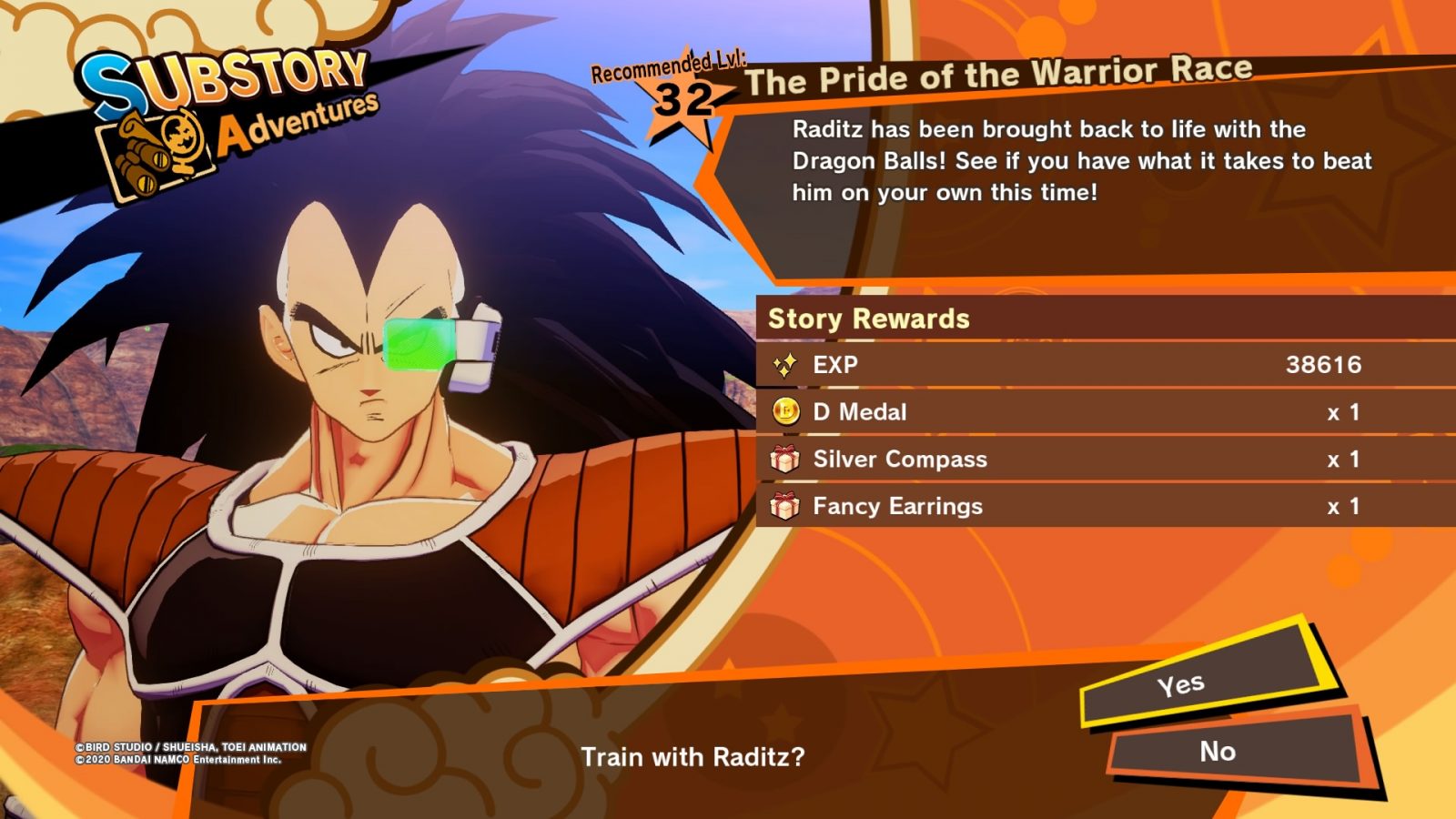 You don’t get enough love, Raditz. Of course I’ll beat your face in again.

As a Dragon Ball fan, this game is phenomenal, but it’s sadly held back by technical issues. While the latest patch made load times a little better, they’re still frustratingly long, especially in a string of cutscenes that take place in different areas and require multiple loading sequences. I’ve also run into a few bugs such as enemies being extremely far away when starting a fight, the health bar straight up disappearing, and a Dragon Ball not being where the map said it was. These could all be fixed in later patches, but sadly they hindered my experience. 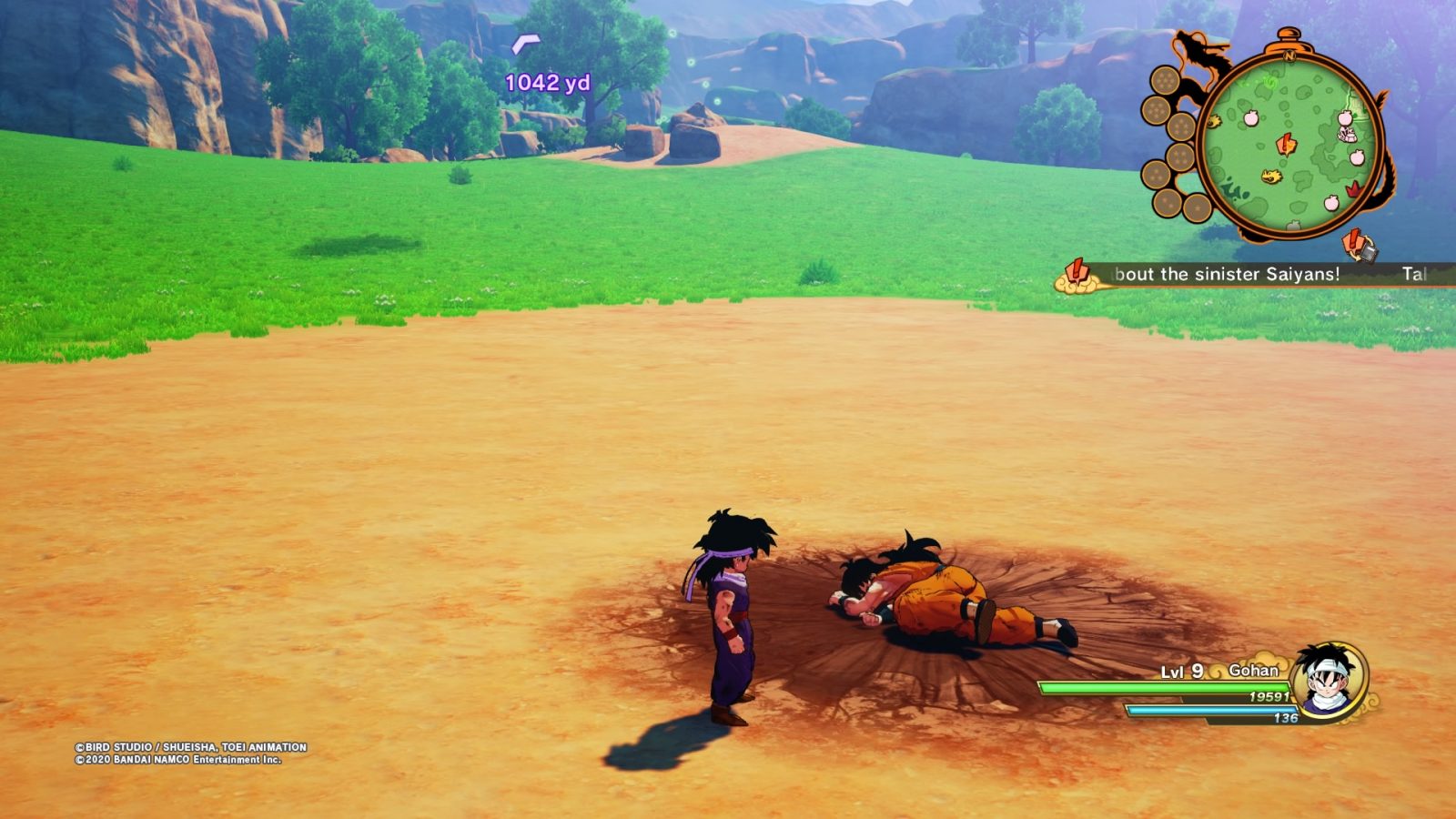 While there’s some downtime before Goku arrives, I decided to hang out with this chump.

The fact that I’ve enjoyed the game so much despite these bugs is a testimony to how good everything else with the game is. While Kakarot tells the entire Z story up to Buu, I’m hoping that either later DLC will feature Dragon Ball Super content or we’ll receive a sequel down the line. I cannot get enough of Dragon Ball Z: Kakarot, and I’m excited to see how it can be topped.

Dragon Ball Z: Kakarot is the best representation of the series’ storyline in over twenty years of games. While animations in cutscenes may be too stiff and there are occasional bugs, the simple yet difficult to master gameplay and the sidequests that succeed in building a world we’ve already come to love make this a must-play Dragon Ball experience.

Sean Anthony likes to combine two of his passions: gaming and writing. Gaming has been a huge part of his life ever since he played his first game as a child, Kirby's Adventure. He aspires to have his name attached to an article that makes the whole world go, "Huh, that's neat, I guess."
Related Articles: Dragon Ball Z: Kakarot
Share
Tweet
Share
Submit