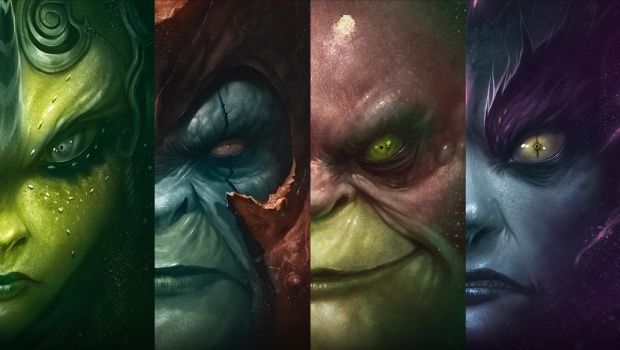 Somewhere in the deepest inaccessible depths where no light from the sun has ever reached, rests the Kingdom of Abyss. Players vie for influence, explore incredible locations, fight ancient monsters, and court the lords of the deep in their quest to claim the throne.

Abyss first appears wholly original, foreign but innovative. It is intelligent, and perhaps requires better than average intelligence to play well. Its theme is immersive – pardon the pun – imaginative and beautifully rendered. It is layered and nuanced, and not at all violent or threatening. It is a quintessential twenty-first century board game, complete with every chip and bauble, and you can even choose-your-own box art. No extravagance was spared. Indeed, even the Abyss website is top notch, with professional graphics and super cool scrolling effects. (You can even download wallpapers and the entire 146MB image collection for free!)

But peel back all the stunning visuals and unique game elements and what you have left is a very expensive-looking game of poker. Not to detract at all from the theme and the beauty of the game, but this is essentially a card game where luck of the draw matters, risk is all about what cards you pass or pick up, and the best hand wins. I am not trying to belittle the game; comparing Abyss to poker is a little like comparing a Maserati to a Dodge – the function is much the same, but only one moves you in style.

But poker is not only about filling out your hand. At some point you’re stuck with the cards you have, and you need to decide if you’re going to be able to beat your opponents straight up or try to force them to fold with an aggressive bet. Abyss lacks that intrigue. It’s more about what cards come up in the Exploration deck and which cards players decide to pick up. Card value and the card type – think suit – become the currency used to buy Lords, which in turn are the currency used to buy Locations. And almost everything yields Influence Points, totaled at the end of the game to determine the new King of Abyss. This layering of currencies has a distinctly Euro feel to it, in the sense that players build simple economic engines.

The current lineup of Lords is called the Court. On a player’s turn he may pay to add new Lords to the available pool. This becomes important later in the game once players have more resources to work with, and when the current lineup is picked over. Acquiring Lords is a separate action, and the Court refreshes automatically whenever only two Lords remain.

Once a player has decided whether or not to add Lords to the Court he must take one of three mandatory actions. Exploring the Depths involves revealing cards from the Exploration deck. In turn, opponents have the opportunity to acquire any of the revealed cards, but can only take one per turn. The idea is to get cards with greater value, unless you’re looking for a specific number to fill out your pool when buying a Lord. There are also six monsters in this deck of seventy-one cards, and on the rare occasion when a monster is revealed, there’s a battle! But the player automatically wins. In my opinion, the monsters add nothing to the game except a sense that there should be more there. Beating a monster gets you a pearl, a basic, all-purpose form of game currency.

Cards not taken by any player go into the Council at the end of every turn. As an alternative mandatory action, a player can pick up one of the Council card piles. These are the face down discards that nobody wanted, but since they accumulate as the game progresses, the pile becomes increasingly valuable. The Council is separated by race but it helps to try to remember the values of cards in the piles.

Players may also recruit a Lord as their mandatory action for the turn. The Lord cards have unique recruitment/purchase requirements, and you’ll need exact change, drawing from your pool of Exploration cards and pearls. Acquiring Lords is compelling because of the special characteristics each Lord adds to your aspiring kingdom. Lords add Influence points, pearls, discounts on future acquisitions, and keys. Keys are used to buy Locations, which are very similar to Lords in game function. Once the mandatory action is completed players may acquire a Location if they have enough keys or meet other unique conditions.

You know that sense of dread you experience when that last player during a round of Arkham Horror finishes his turn and everyone waits on pins and needles for the next Mythos card to be revealed? Abyss is missing that feeling. The potential for intrigue exists. The theme, so vividly illustrated, enlists colorful and fantastic alien creatures which could easily be as compelling as they are creatively rendered. It’s the same concept every movie, television show, story, or song uses to captivate consumers of media: tension and release. The limited tension in Abyss comes from revealing the Exploration and Lord cards, and it feels flat to me.

Another game dynamic that didn’t appeal to me is the constant counting players have to do. There are a lot of combinations of numbers to keep track of with the accumulation of Exploration cards and the moving pieces on the Court as Lord cards come and go. Playing this game well depends on players ability to remember the value of cards in the Council decks.

Ultimately, whether you enjoy this game or not will depend on how much you like resource/economy games. If you happen to enjoy poker, bonus! For me, it feels like a very pretty game with a lot of good ideas that is well executed but fails to fully leverage the theme. I wanted more. I wanted something dark, mysterious, and foreboding. I think this is a very good family game that hobbyist parents will enjoy with older children, but I would not recommend it for a group of serious gamers looking for a more penetrating thematic experience.

Abyss by Bruno Cathala and Charles Chevallier and Asmodee Games

A beautiful Euro-style economic game. Vividly imagined, actual gameplay feels a little flat and fails to make the most of the fantastic theme. High marks as a family game but will leave hobbyists wanting.