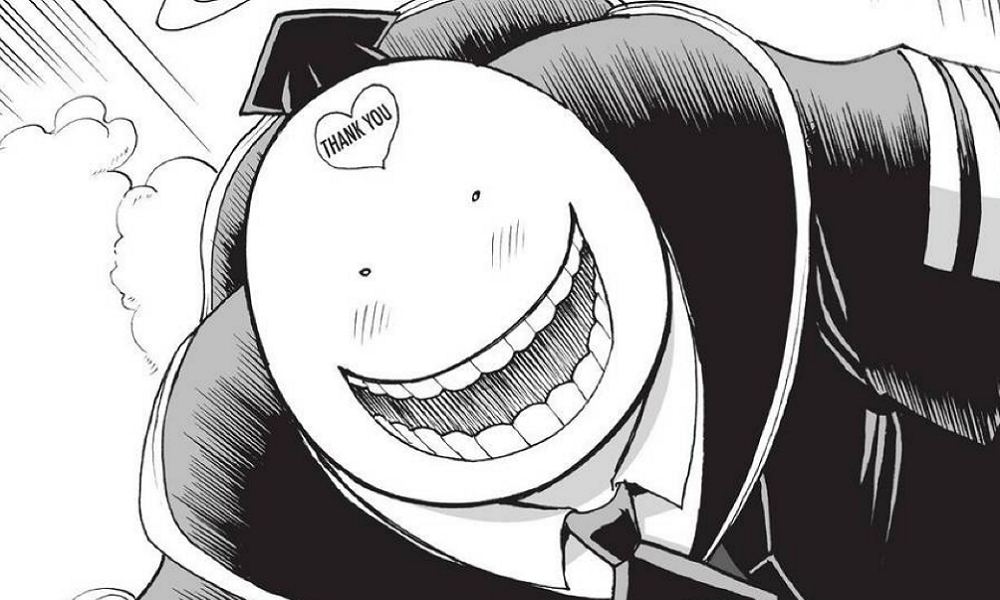 Well, here we are folks: The end of the end of Assassination Classroom. (I know I’ve used that first sentence in the previous volume reviews, but let’s roll with it.) Considering volume 20 is the climactic battle, volume 21 is the somber dénouement to this tale of a class of misfits and its quirky teacher. From the moment you start reading, you know the foregone conclusion of the narrative; it’s just the story tying up some loose ends before the real finale. However, while the first half of the volume is filled with wrought emotion, the second half is a mixed bag of filler stories that pad the page count.

The twenty-first volume of Assassination Classroom begins with two facts: Korosensei is dead and Class-E will graduate the next day. What follows are three heartfelt chapters chronicling the life and times of the students during and after this moment. We take a subdued look back at the class and its development, and even the dastardly characters in the story get some closure (and a couple people get the comeuppance they deserve).

The art here is centered more towards a sad and soft tone rather than the hyperactive action in the previous volumes. While there are bits and pieces of humor and action here, the mood portrayed is emotional and nostalgic. The actions of Class-E have come up to this point, and the character development is shown in a scant few pages; I struggle to keep up with most ensemble casts in manga, but Matsui’s characterization for each of the members of Class-E remains distinct.

Chapters 179 and 180 really tie up the loose ends with the story, as they act as a “where are they now?” epilogue. To see how Korosensei has affected these children is a positive and endearing act, and it cements a wonderful message of how teachers can change their students for the better (even if it’s for assassination). While I’d rather not spoil the results of a few of the characters, the chapters are a nice sendoff to the remaining cast.

That being said, I’m not sure I wanted these last three chapters to be in their own volume; including them in volume 20 would have been a better option. That’s because while it is a great way to end the series, volume 21 ends with the inclusion of two extra stories. One of them feels like actual filler (actually created to promote the second live-action film in Japan), while the other is a one-shot that Matsui created for a pitch.

The first story is four chapters long and acts as a side story for Korosensei as he hides away from his students during winter break. Along the way, he meets a motley crew of assassins who want to find his secret hideout, while the owner of the place they hang out gets in trouble with a local loan shark. The owner’s daughter, Hotaru, looks similar to Nagisa (a fact that is humorously lampshaded by Korosensei), and wants to help out after the owner is kidnapped. It’s a story that’s reminiscent of the Kyoto trip arc (which, mind you, was covered in the early chapters), and as such, doesn’t feel too involving. It’s a shame too, since this is where the action and comedy come in; we get to see what Korosensei really does when he’s not around the classroom, and it’s pretty hilarious. However, the story doesn’t hold any bearing to the main plot, and since the manga was finished by this point, doesn’t really make a dent in character development either (the characters introduced aren’t mentioned again).

The second included extra, however, is a standalone one-shot that acted as a rejected manga pitch. Entitled Tokyo Department Store War Journal, it tells the story of a girl looking for the perfect gift for her father in a department store. One big problem with that: the store she’s in is a mutated tower full of sentient items, which are eldritch abominations that are willing to kill any bounty hunters traversing within the tower’s depths. Along the way, she meets a selfish yet proficient hunter, who protects her in exchange for some wealth. It’s a story that feels like Bobobo-bo Bo-bobo mixed with Let it Die, and it’s simultaneously grotesque and hilarious. I loved the interactions between the two main characters (a weak but well-meaning kid and a childish yet talented hunter), and it reminded me of the former’s main protagonists. The monster designs morphed mundane objects into frightening monstrosities, and they were pretty detailed. The action scenes here were pretty fluid, and I liked the pacing of the one-shot. It’s a shame that this wasn’t expanded into its own series, but it was a fun romp that was a better inclusion than the first story.

The final volume of Assassination Classroom might be bogged with filler in the second half, but it’s packed with loving emotion that sends the students of Class-E to a wonderful ending. We will miss the adventures of the killer class, but it was a wonderful journey to take.

Elisha Deogracias is an aspiring accountant by day, freelance writer by night. Before writing for Gaming Trend, he had a small gig on the now defunct Examiner. When not being a third wheel with his best friends on dates or yearning for some closure on Pushing Daisies, he's busy catching up on shonen manga and wacky rhythm games. Mains R.O.B. in Smash. Still doesn't know if he's a kid or a squid.
Related Articles: Assassination Classroom Volume 21, Beyond the Page
Share
Tweet
Share
Submit