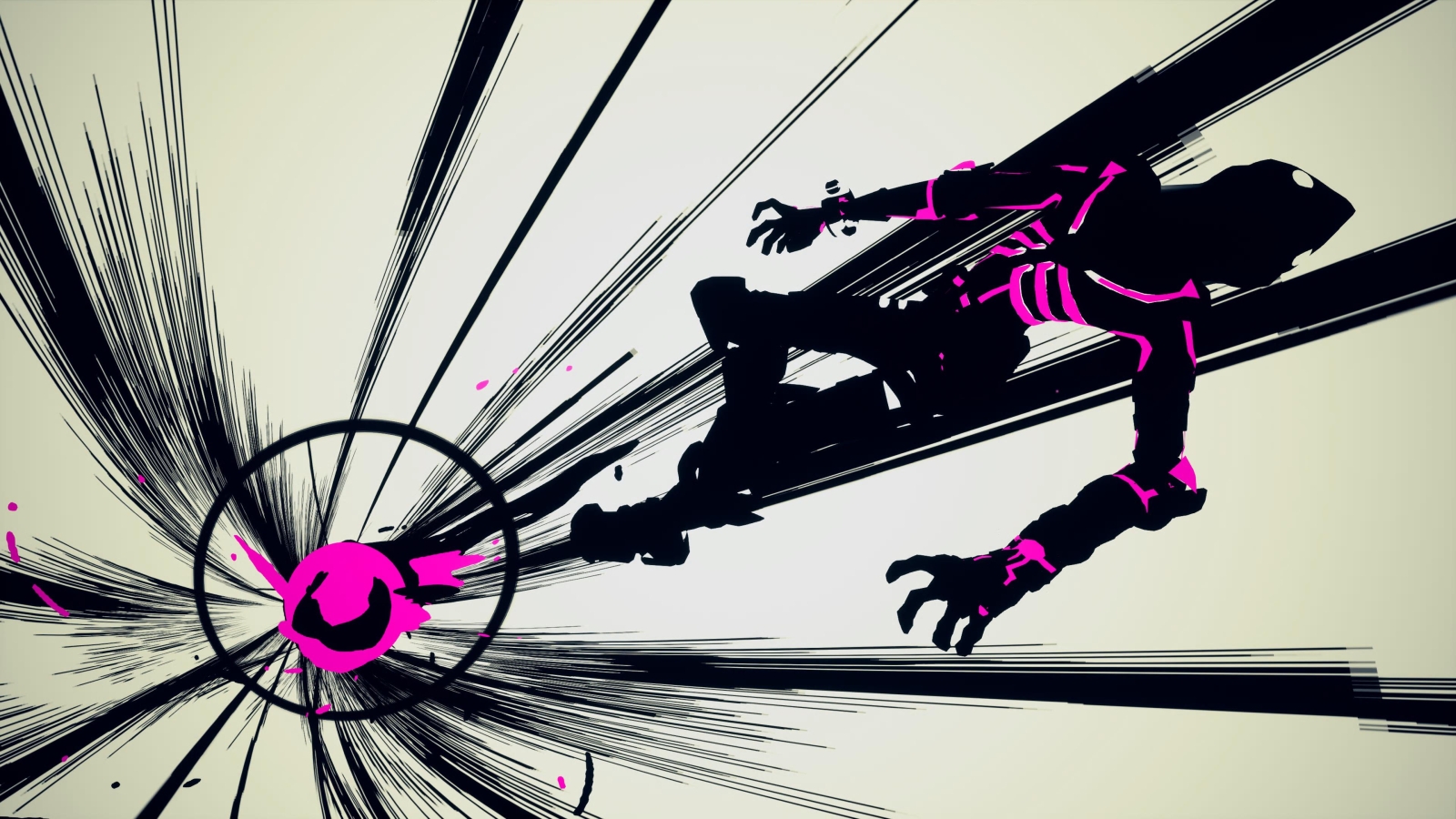 The Ultravoid is quickly approaching the planet, consuming every star in its path. While the governments and representatives debate about what to do, a group of individuals calling themselves the Voidrunners are taking action. Using a device called the Starseed, the Voidrunners hope to collapse the Ultravoid before it can consume their home. One of these runners, Rei, arrives within the black hole to discover the Starseed damaged and her comrades missing. To restore the device, she must explore the remnants of dead planets and defeat monsters called Remnants along with searching for her friends. But there’s something else going on behind the scenes, and a mysterious entity by the name of Echo warning Rei away from her task…

Solar Ash is something of a precision platformer, but with enough wiggle room to keep everything fun and flowing nicely. Rei has a small but diverse set of moves at her disposal with which to explore the Ultravoid. By holding L2 (or enabling a toggle in the options) you can start skating, which lets you move quickly around the environment. Pressing R2 allows you to dash to either gain speed quickly or transition into a jump to cross large gaps. Mashing Square will unleash a three hit combo, X lets you jump or double jump, R1 allows you to grapple onto certain points or even enemies when you use Circle to Timeslip. Timeslip, as the name implies, slows down time for a moment so you can catch your breath, quickly attack, or grapple using its extended distance. It’s not the biggest moveset out there, but the game gets a massive amount of mileage out of it thanks to some great level design.

To fix the Starseed, you need to activate a region’s console to bring your adorable AI, Cyd, online, then eliminate the anomalies scattered around to wake up the massive anomaly (or remnant), defeat the boss, then move on to the next area. The basics of anomaly hunting involve scanning for large masses of black goo with an eye and a spike by holding L1 for a moment. Once you find one, you hit the spike and another one appears nearby. After hitting all the spikes within the time limit, you can then grapple onto the eye to eliminate the anomaly. It’s a fairly simple concept on paper, but factor in unique hazards, strict time limits, and having to move at full speed constantly and you’ve got a gameplay loop that remains consistently challenging.

While those basics remain the same throughout the experience, you’ll also have to contend with new mechanics introduced in each zone. For example, the Broken Capital is an open-world esque area focused on verticality by utilizing grind rails and grapple points to hop between buildings. Conversely, the Eternal Garden is more puzzle focused and linear; you need to pollinate pairs of mushrooms to make them grow rails for you to get to the next section on. This leads to a wide variety of mechanics and hazards that keep things interesting. 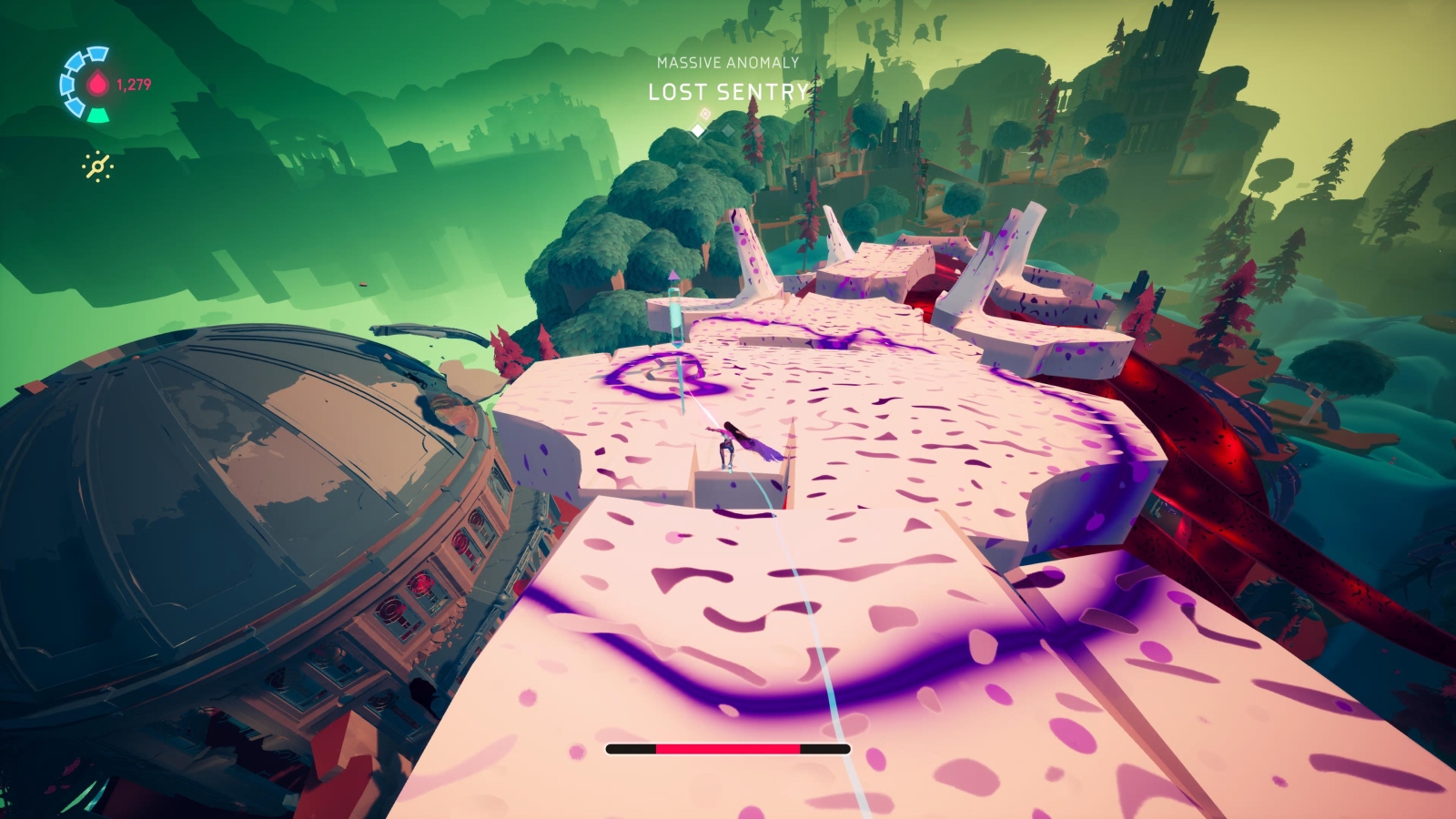 As you explore, you’ll come across plasma – little pink gobs you can have Cid use to increase your maximum shield. After crash landing, Rei’s suit is badly damaged and only allows for about two hits before you die and are sent back to a checkpoint. You can spend this plasma in ever increasing amounts to fix a shield pip. However, after beating each boss, you’re brought back to speak with Echo, who will crush Rei in her massive hand and damage a pip again, so you can’t actually stay at max shield until the very end of the game. I managed to have enough plasma each time this happened through diligent exploration, because these locations are just too beautiful and fun to navigate to not see all of them, but this combination of gameplay and story is still really interesting despite being easy to mitigate.

On top of plasma, you can also find logs from your fellow Voidrunners. There’s about five in each sector, and finding them all in a zone will get you a new suit. Rei’s initial suit reduces the time Timeslip takes to cool down, but there are others that will double the amount of plasma collected or even restore shields upon defeating enemies. The caches can be fiendishly hidden, with some even in the transition areas between major locations, but again this is a great combination of story and gameplay seeing what the other Voidrunners did and how they deal with the impending destruction of their home. 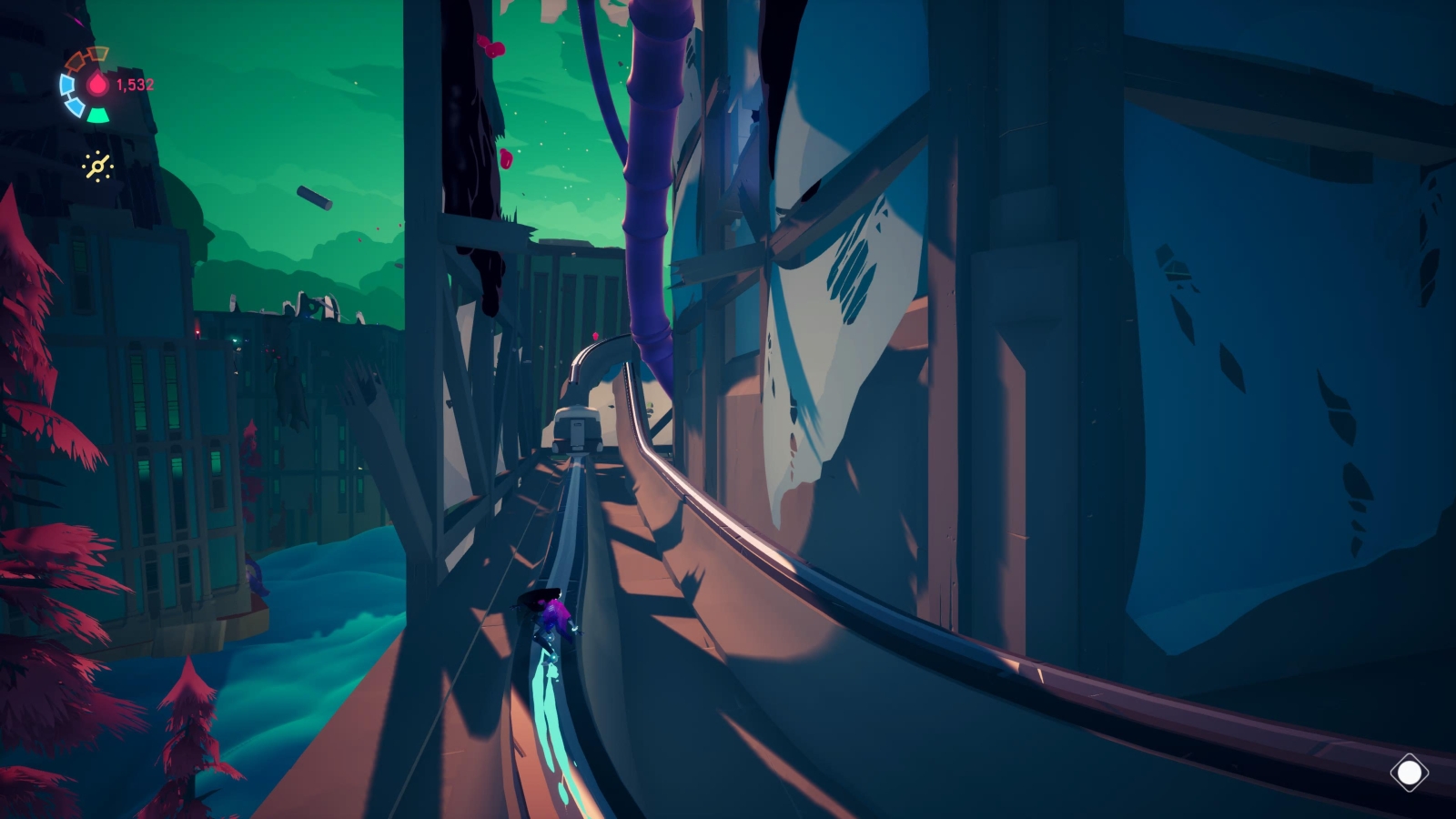 I think 90% of this game is fantastic, with platforming that controls incredibly smooth, several collectables, and an interesting story. However, there are several places where it stumbles hard, in particular with the boss fights. Again, most of them are a joy to fight, but a few of them can be infuriating. Two that stick out in my mind were the Luminous Peak boss, which is a giant bird you have to grind up to, and the fight against Withered Eye, which takes place on a small planet.

Both of these are in the latter half of the game, so you’d expect them to be difficult, but the difficulty in this situation comes mostly from the camera refusing to cooperate and a few time limits that are so strict I can’t even see where I’m supposed to go before I get hit. In addition to that, I felt the final two or so hours of the game just fell apart with the plot becoming cliche and overbearing despite some decent foreshadowing leading up to it. A lot of what the game asks you to do in these final moments feels more trial and error than having quick reaction time and mastery of the fluid controls. While Solar Ash feels fantastic to play, I can’t wait to see speedruns that look like a dangerous, perfect ballet, the end of the game takes the wind out of its sails.

Controlling Rei in Solar Ash’s beautiful world is an absolute joy, with fluid, precise, and simple controls as well as a diverse set of challenges to overcome. Unfortunately, there are more than a few moments where the normally excellent level design suddenly becomes tedious and annoying.

David is the kind of person to wear his heart on his sleeve. He can find positives in anything, like this is a person who loved Star Fox Zero to death. You’ll see him playing all kinds of games: AAAs, Indies, game jam games, games of all genres, and writing about them! Here. On this website. When not writing or playing games, you can find David making music, games, or enjoying a good book. David’s favorite games include NieR: Automata, Mother 3, and Gravity Rush.
Related Articles: Indies, Solar Ash
Share
Tweet
Share
Submit