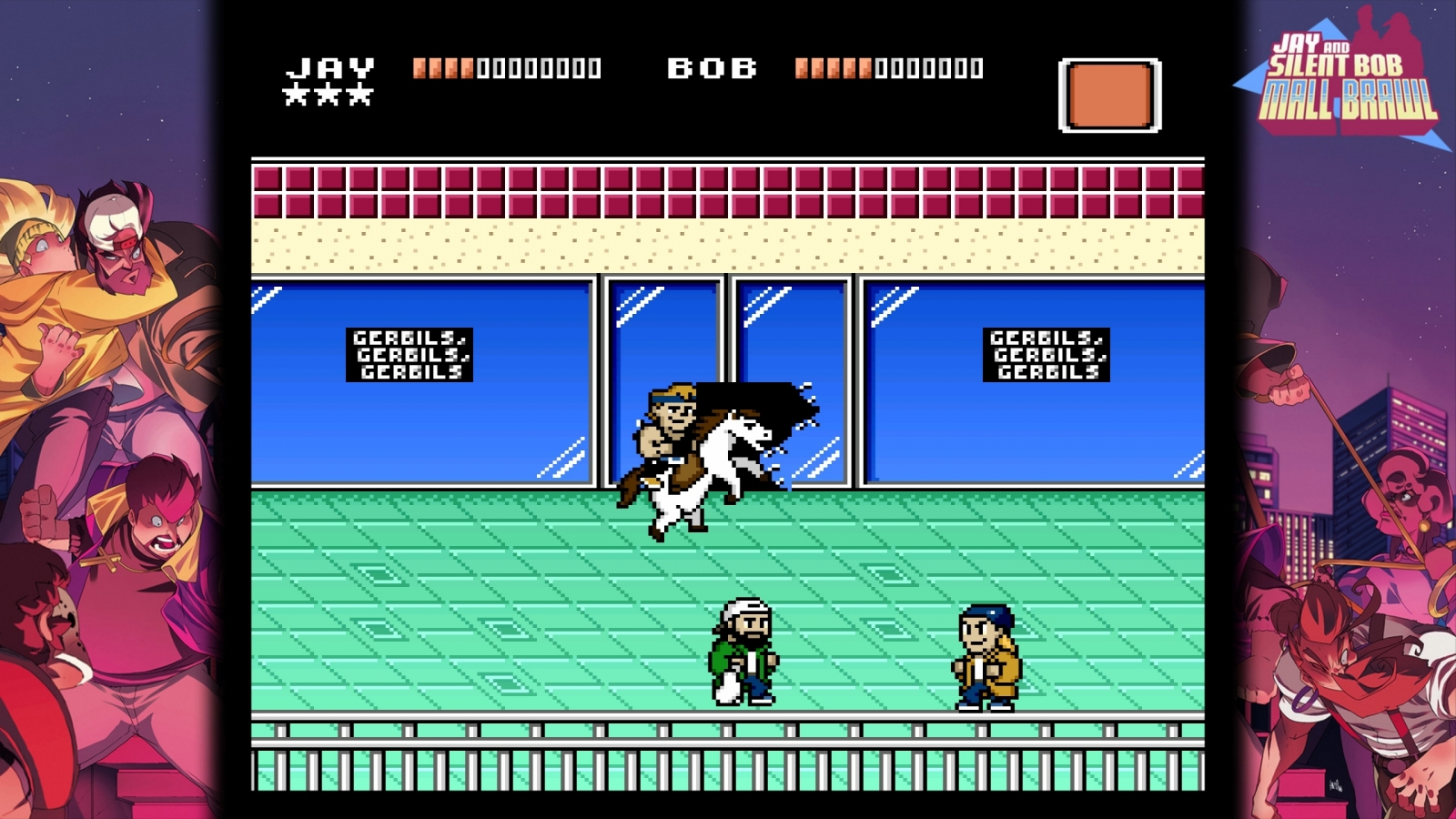 Everybody’s favorite slackers are back in an incredibly difficult love letter to the NES era. Jay and Silent Bob: Mall Brawl is a side scrolling beat ‘em up that would fit perfectly in the 80’s. Featuring detailed 8-bit graphics, a decent variety of bosses and enemies, and nine levels of insane challenge, Mall Brawl is a competent, if not quite amazing, Double Dragon clone.

Taking place directly after Jay and Silent Bob’s Dating Show sabotage which occurred in Mall Rats, Mall Brawl follows our stoned out heroes as they fight off mall security, disgruntled employees, reckless women with baby strollers, and even a poop monster.Yes, you read that right – a poop monster. The duo’s typical potty humor is alive and well in Mall Brawl. While enemies are basically cut and pasted with different color outfits or costumes, boss fights are where Mall Brawl shows its creativity. 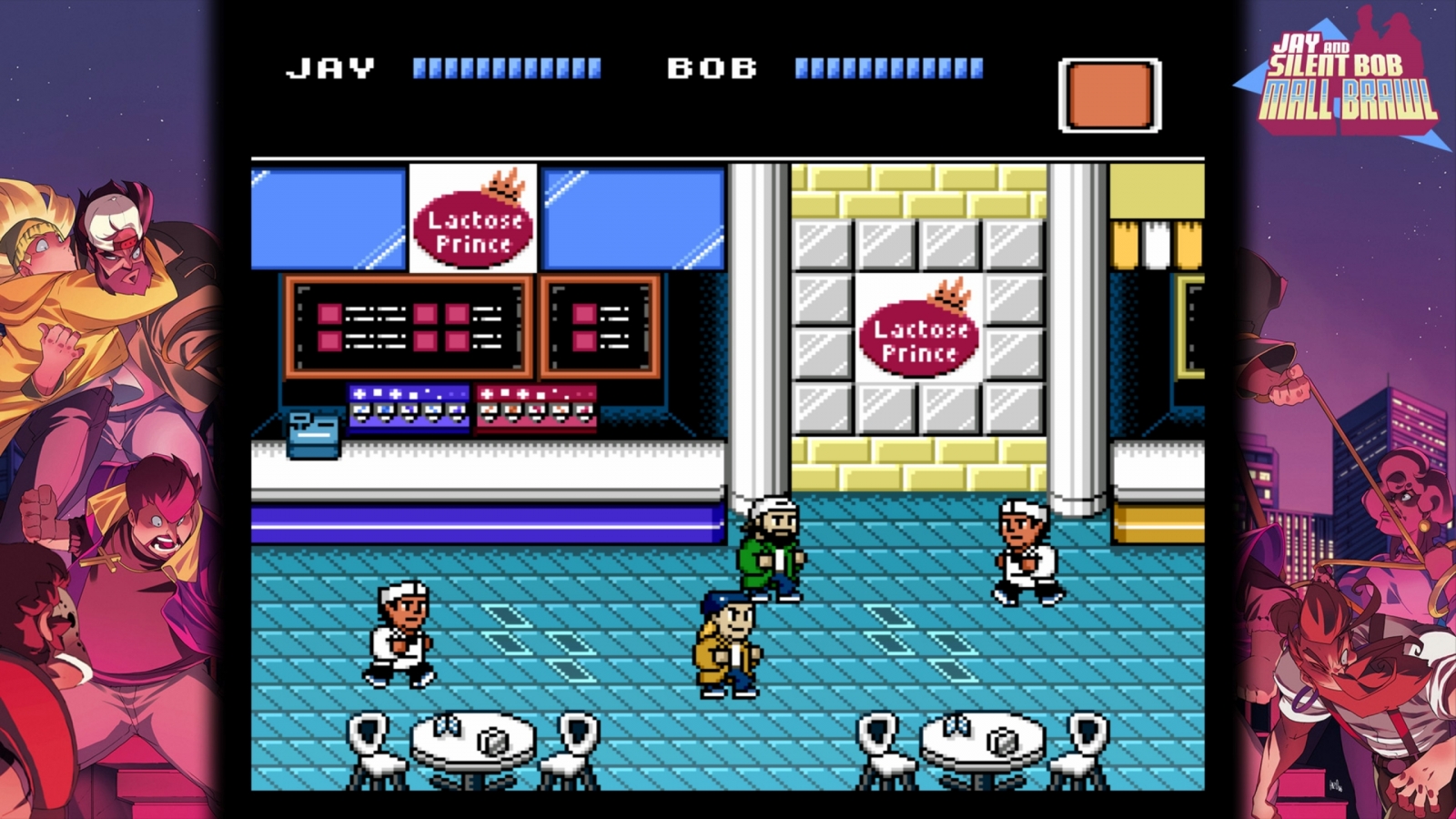 Each boss fight is varied and memorable. You will tackle a deranged man riding a unicorn, a fight which takes place on a giant air hockey table, a Mega Man inspired battle, and even go toe to toe with a poop monster hidden in the mall’s bathrooms. Boss fights are both challenging and fun, especially when faced with the stress of knowing you will have to replay the entire level if you fail.

In Mall Brawl you are only technically given one life, but you do have control of both Jay and Silent Bob, each with their own health meters. While playing solo you can switch between the two at will. The character not being used will slowly regenerate their health while you are actively playing – but be warned you cannot stand still and expect health to regenerate. You must be actively moving forward or fighting. This system forces players to stay active and switch between characters often and is arguably the best way to play Mall Brawl. 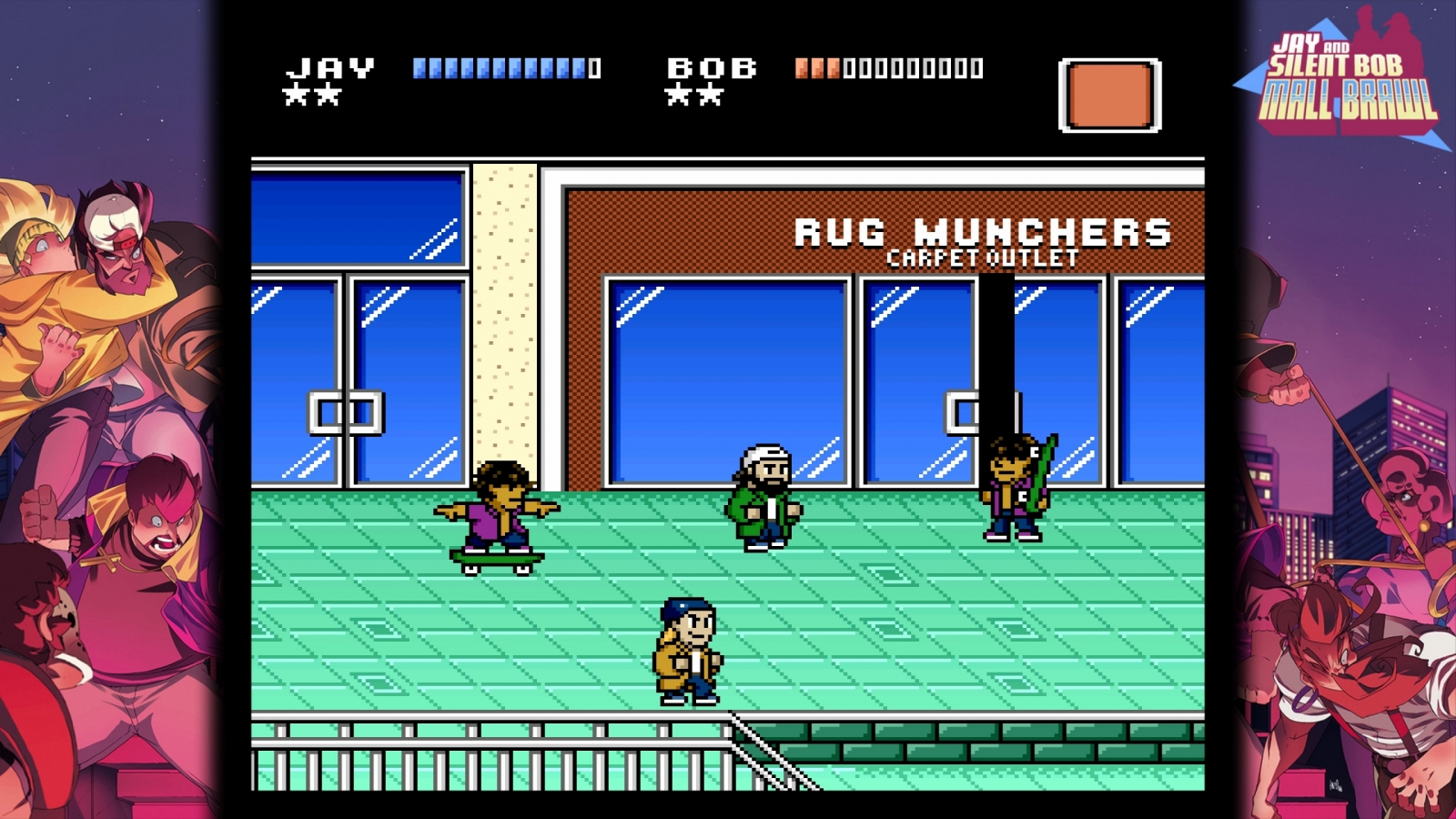 If playing co-op, each player takes the reins of one of the characters with their own health bar, which does not refill on its own. That said, if one player dies and the other can survive long enough, the other character will slowly build their health back up and allow them to jump back into the game once their health meter is about half full. It adds a nice tension to survival when faced with a boss or multiple enemies and you’re low on health.

Despite your most valiant attempts, you will die. A lot. Enemies are numerous and extremely aggressive. The wonky NES era controls do not help as many times it is difficult to dodge quickly or to land an attack. I spent more time than I would like to admit punching the air rather than the guy standing behind me whittling down my health. 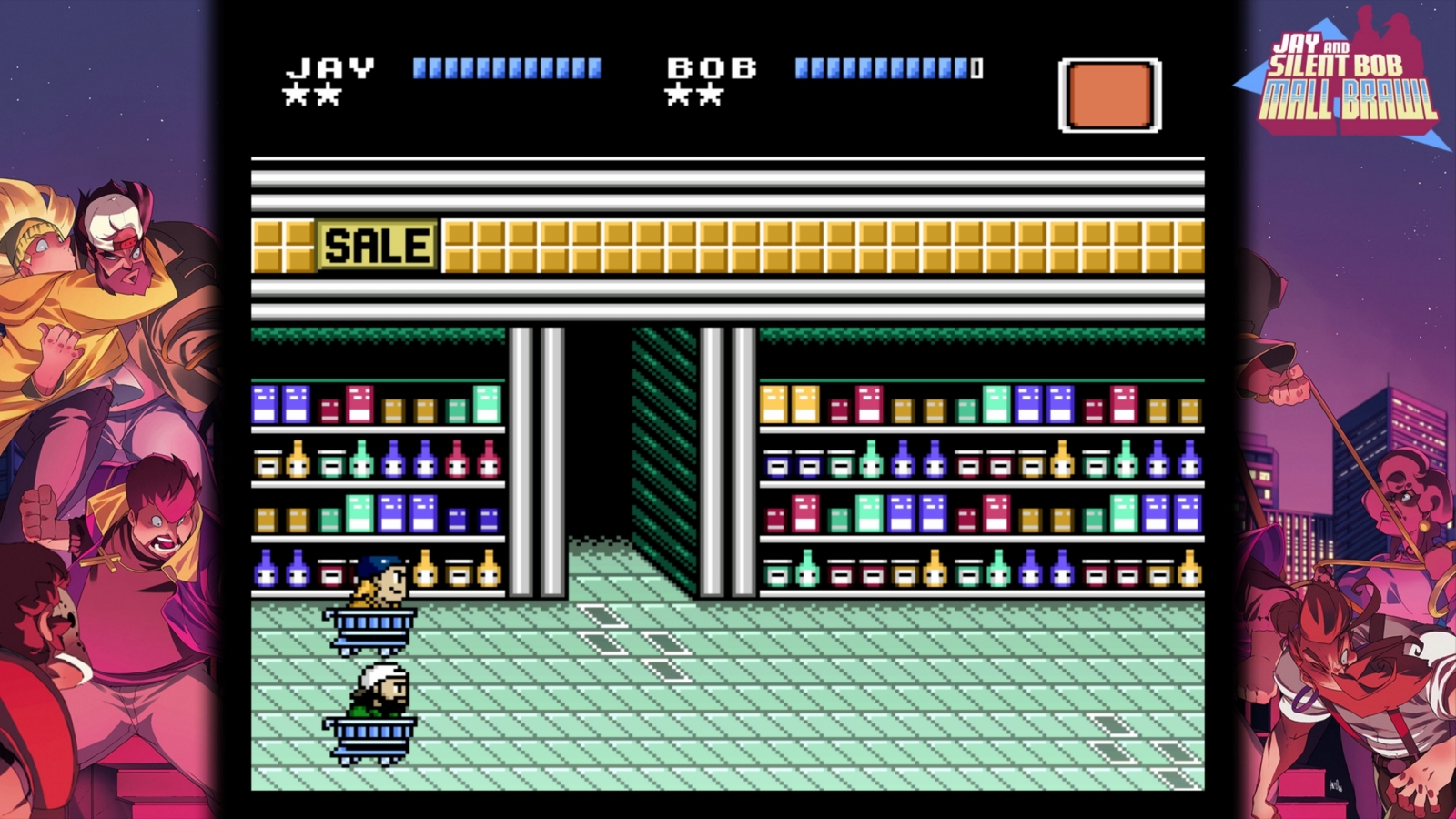 As if the brutal enemies and bosses weren’t enough, there is also a shopping cart riding section which is up there with the notorious Battletoads level, though not quite as tough. Towards the end of the game you begin having to take on bosses you’ve already defeated as regular enemies. It is sometimes almost too much to handle, especially if you aren’t particularly good at beat ‘em ups.

While I enjoy a good challenge, I do feel that Mall Brawl teters a bit too far on the difficulty edge and lands more in the playable, but a bit too stressful to be fun, pile. This is due to the long levels, only having one life, no difficulty settings, being forced to restart from the beginning of the level upon death, aggressive enemies with incredibly large health reserves, wonky controls, and – especially towards the end – just too much being thrown at you. Thankfully, there is a save feature so you do not have to replay previous levels and can tackle the game in multiple sittings, alleviating some stress that comes with a playthrough.Sure, you could say that I just need to get better at the game, and that may be the truth, but I do have a threshold for how many times I can repeat a section before giving up and Mall Brawl repeatedly pushed me to that limit. Others may have a much higher threshold or prefer more of a challenge, and more power to you. 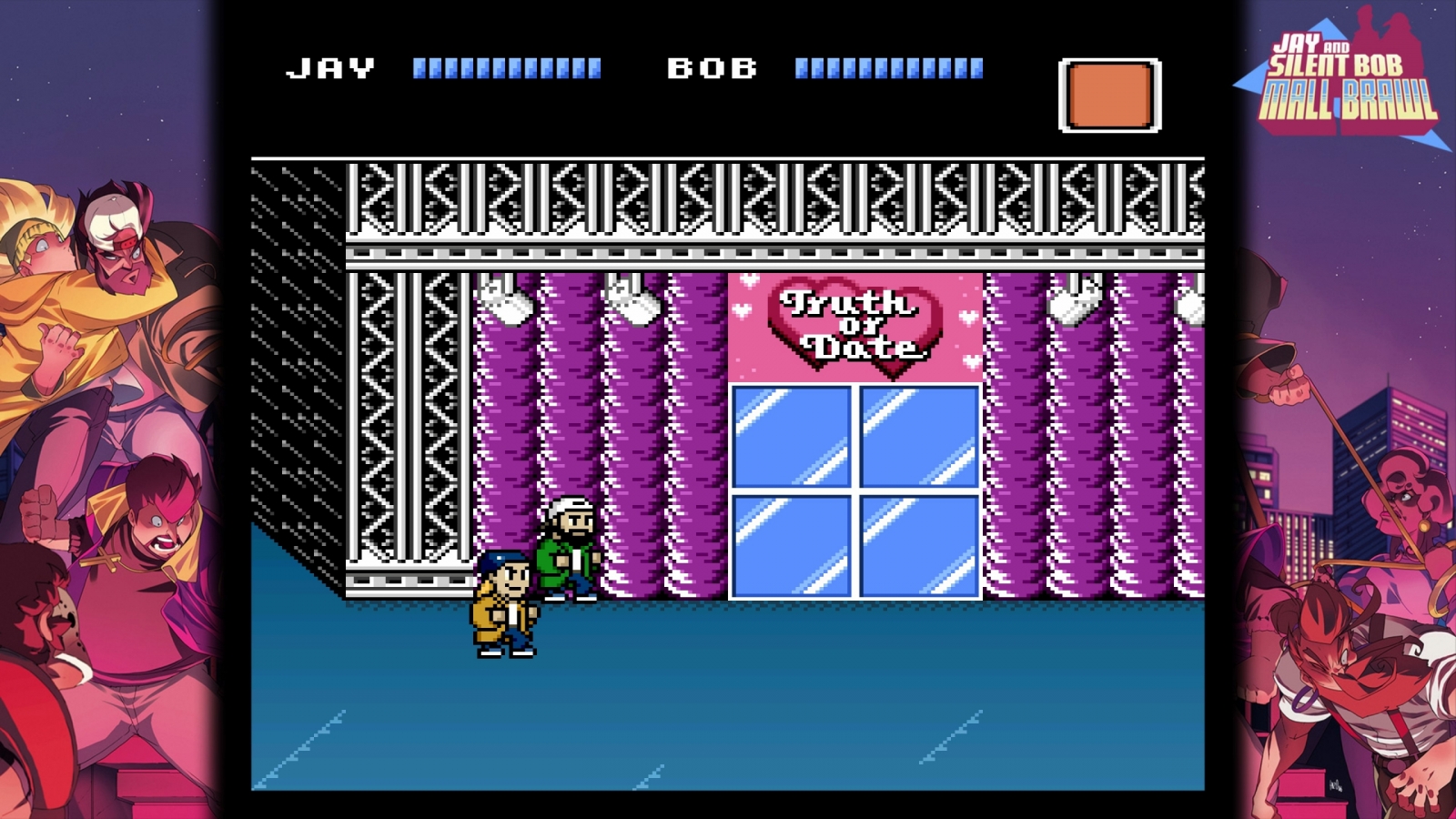 For a retro inspired title, the levels are actually quite varied, ranging from the dating show TV set, to a mall food court, lingerie shop, bathroom, arcade, and even a roadway featuring the iconic Quick Stop complete with its “I assure you; we’re open” sign.There are two modes available: arcade mode and original mode. Arcade mode boasts slightly better and more colorful graphics, but the gameplay is essentially identical. A few other options exist such as changing the border or filter, including a nice option to add a filter that replicates a CRT TV.

Jay and Silent Bob: Mall Brawl does a great job recreating the look and feel of an original NES release, but takes its retro inspired roots a bit too far and becomes a game which few but the most dedicated will finish. That said, I did enjoy my time with the game and catching the references to other Kevin Smith movies.

Richard Allen is a freelance writer and contributing editor for various publications. When not writing for Gaming Trend you can find him covering theatre for Broadway World, movies and TV for Fandomize, or working on original stories. An avid retro gamer, he is overly obsessed with Dragon's Lair. Chat with him via @thricetheartist on Twitter and @richardallenwrites on Facebook and Instagram.
Related Articles: Jay and Silent Bob Mall Brawl
Share
Tweet
Share
Submit