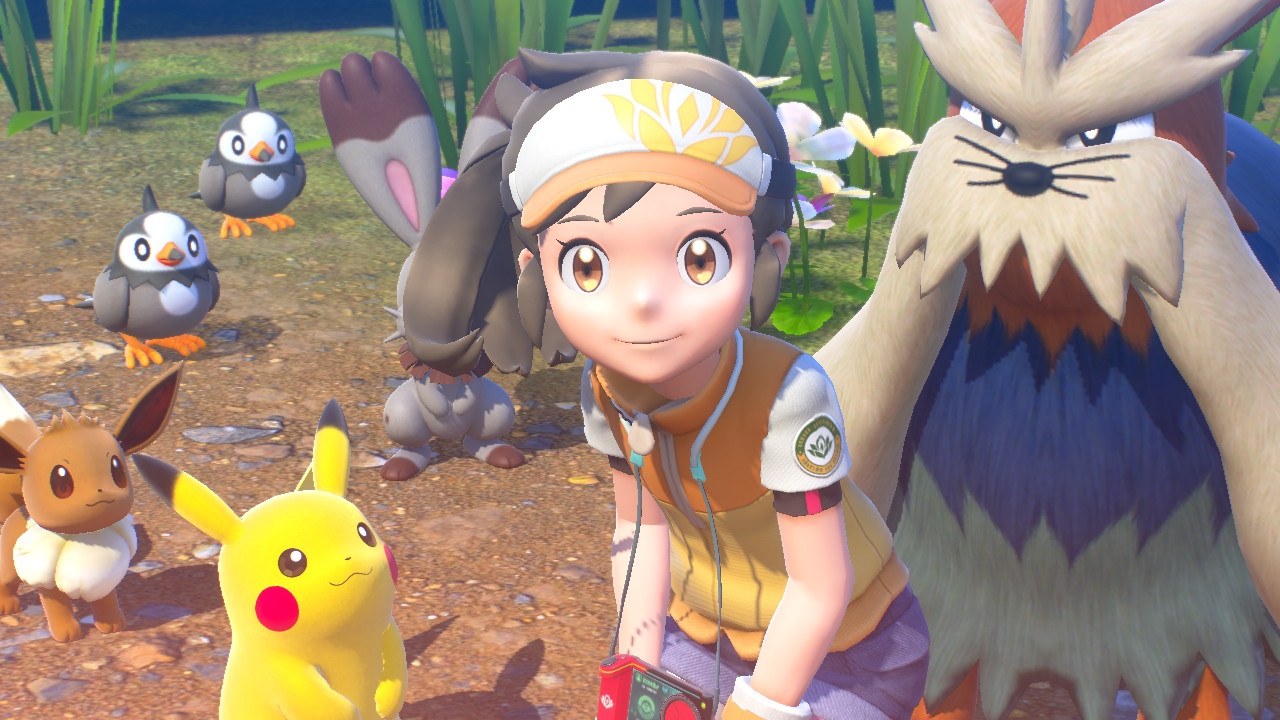 I’ve always been interested in photography, particularly games with some aspect of photography in them. I’m a sucker for photo modes, I take way too many screenshots, and one of my favorite games of last year, Umerangi Generation, is entirely about expressing yourself by taking pictures of the shitty future. While I’ve never played it myself, I’ve watched several playthroughs of Pokémon Snap on YouTube, so I was very excited to check out this long awaited sequel.

In New Pokémon Snap, you travel to the Lental region to assist Professor Mirror in his study of the Pokémon who live there. According to the ancient explorer, Captain Vince, the creatures in this region experience what he dubbed the Illumina phenomenon. When exposed to certain stimuli, Pokémon will glow and behave differently, there are also a few Pokémon who have grown much larger and are always in this state. You, along with his other assistants Rita, Phil, and special guest Todd Snap are tasked with documenting all the Pokémon who live here in the Photodex by taking pictures of them in their natural habitats. Aboard the Neo-One, you travel along a set track in a location and photograph the Pokémon you see along the course simply by aiming with the left and right sticks then pressing the A button. You can also turn on motion aming and rebind controls as you wish, which is great to see in a Nintendo game to make it more accessible. 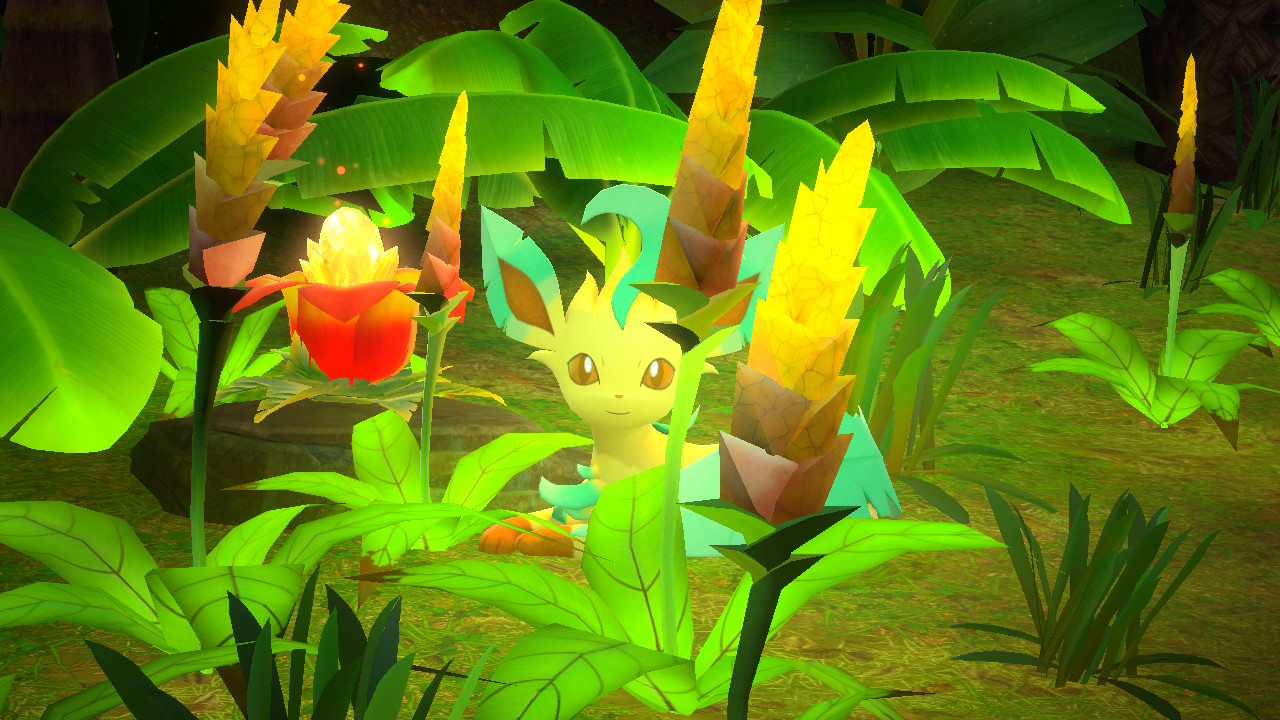 You don’t want just any blurry bigfoot pictures though, you want your subjects to be in center frame, facing the camera, and as big as possible without cutting off any part of their bodies. It’s less artsy and more scientific, as at the end of each run you choose one picture of each Pokémon to show to the Professor for grading. Every Pokémon has four Photodex entries represented by up to four stars. It’s a little unclear in game, but each of these entries seem to be of different behaviors or moods of a creature, like their being calm, using a move, or jumping in the air. Along with the scoring system (which is slightly less nonsensical this time around), this incentivises returning to courses to get better photos and complete the Photodex.

At the start of the game, you can only zoom in to get better shots but as you progress you’ll gain access to a few familiar tools to manipulate Pokémon behavior. These include the soft Fluffruit to feed and boop creatures (in retrospect the Pesterball was a bit cruel), a flute to play music to wake up Pokémon or have them dance, a scanning burst to get them to face you, a turbo button to speed up your movement, and the new Illumina Orbs to trigger the Illumina phenomenon which must be unlocked by taking a picture of a glowing Crystabloom on each island. While I enjoy using all of these tools and discovering what Pokémon can do, it can be very unclear what reaction a tool will induce in a Pokémon if any. For example, the scan is supposed to get Pokémon to face you but I can count on one hand the amount of times that actually worked. Along with the star system, these are great ideas but can be confusing in practice. 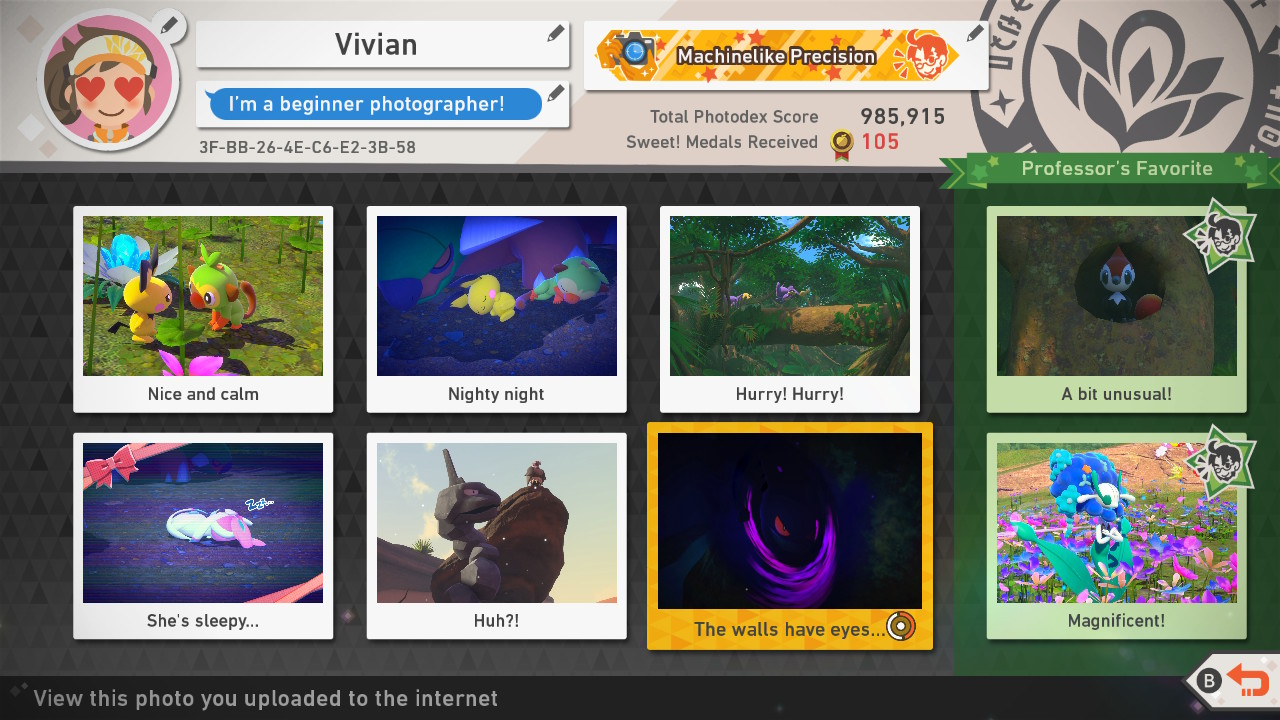 Where the original Pokémon Snap was short and sweet, New Pokémon Snap is bigger and sweeter. There are a ton of locations to visit and revisit, from a grassy plain, snowy tundra, or a season changing forest. When selecting an area on the map, you’ll also get the choice of the time of day or location level to visit. Time of day, such as day, night, or sunset, completely changes what’s happening in a level; new Pokémon will show up, others will exhibit new behaviors, along with other events that only occur at that time. Levels similarly change things, but are unlocked as you gain experience in a location by repeatedly clearing the course and taking better pictures. I’m flabbergasted at the sheer amount of content in this game, even after rolling the credits I unlocked a new course and still haven’t reached the maximum level on any zone.

New Pokémon Snap is absolutely gorgeous as well, in particular the lighting on display here is unlike anything I’ve seen on Switch, and somehow it still targets 60 frames per second! Unfortunately that beauty causes the game to dip below 60 quite often, especially in cutscenes or the Illumina Pokémon “boss fights”, but I didn’t find it impacted gameplay all that much. Still, it is very noticeable and detracts from the overall experience. The audio on the other hand has a very strange problem: it’s extremely quiet. I don’t know why, but even with all the in game settings at max I still have to essentially double the volume both docked and portably to hear the game clearly. Just make sure to turn it back down when you’re about to close the game, because the home menu opening sound will be very, very loud. 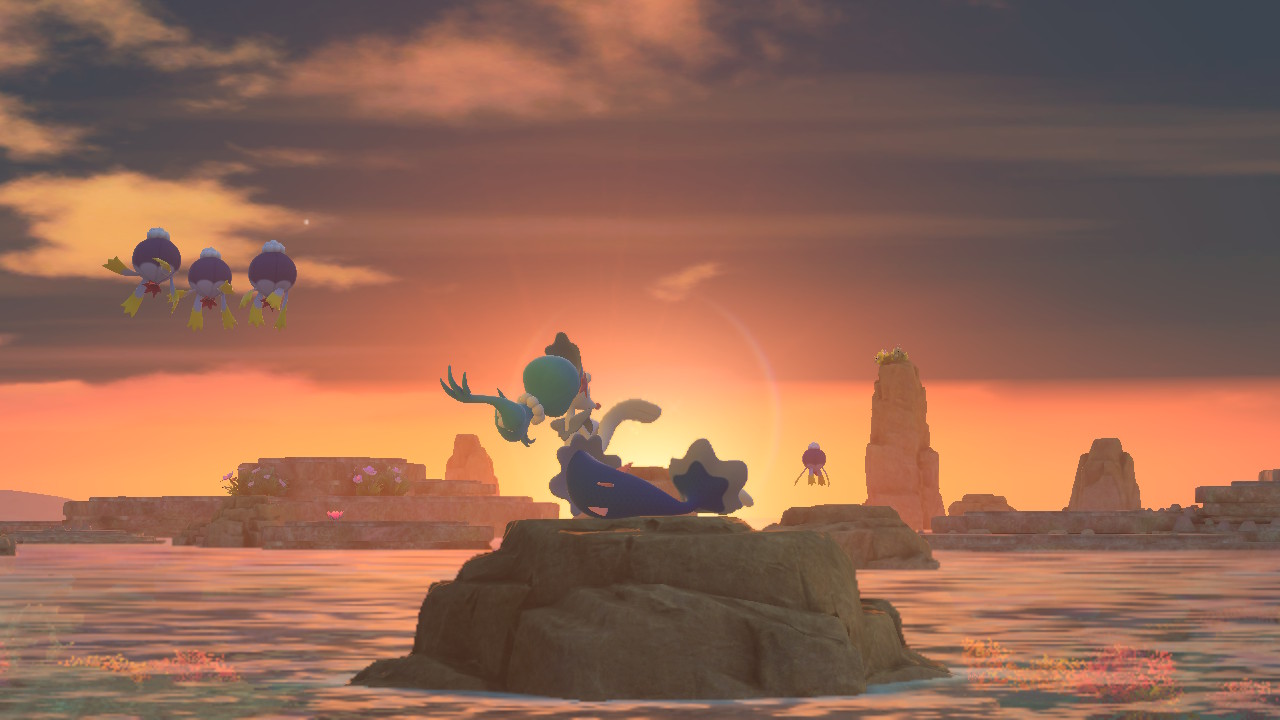 Seeing all these Pokémon in their natural habitats is by far my favorite part of the game, and it reignited a magic I haven’t felt for the series in a long time. I generally try to avoid coverage of the main series so I can be surprised by the Pokémon I encounter in the game, but New Snap makes said discovery much more exciting than just another random encounter. It brings to life what I imagined as a kid playing the games and watching the anime. With the jump to 3D I think some of this magic was lost, and I hope the main line games can take notes from Snap in this aspect.

Finally, let’s talk about the various sharing and photo editing features. After Mirror’s grading, you can choose to save any of the pictures you took and even Resnap them if you want a better angle or to change the depth of field, contrast, and add filters. In your personal album, you can edit photos further by adding stickers, frames, and a wider selection of filters. You can then upload a pic to your personal page (up to six) for others to view and give a point called a “Sweet!” much like Miiverse on the Wii U. You can see some of my snaps throughout this review, but it’s a ton of fun to both edit your own photos and see what other people have created. It scratches that artsy and more playful itch that filling out the Photodex doesn’t and really rounds out the experience.

New Pokémon Snap is a delightful photography game that I’ll be coming back to constantly for just one more course. Seeing Pokémon in their natural habitats captures a unique magic the series has been missing for a while, and seeing how they react to you is a ton of fun. While filling out the Photodex is rewarding, equally rewarding is taking more creative snaps, editing them, and sharing them online.

David is the kind of person to wear his heart on his sleeve. He can find positives in anything, like this is a person who loved Star Fox Zero to death. You’ll see him playing all kinds of games: AAAs, Indies, game jam games, games of all genres, and writing about them! Here. On this website. When not writing or playing games, you can find David making music, games, or enjoying a good book. David’s favorite games include NieR: Automata, Mother 3, and Gravity Rush.
Related Articles: New Pokémon Snap
Share
Tweet
Share
Submit